Over the past couple years, Team17 has become a publisher to watch as they've put out several great digital titles. Before that, the UK studio was mostly known as "the 'Worms' developer" as Team17 has been creating new entries in their turn-based combat series since it began in 1995. 'Worms' has practically been a yearly staple, not unlike 'Madden' or 'Call of Duty.' After finally taking a year off (it's first since 2000), the studio is back with 'Worms W.M.D,' a new entry in the series that aspires to teach an old dog new tricks by adding in several new mechanics.

Much like past 'Worms' games the goal in 'W.M.D' is a simple one: kill all of the worms on the opposing teams. The task might not require further explanation, but Team17 gives players an amazing amount of freedom to actually get the job done. I could send an exploding sheep to take out foes, or I could call in an air strike. If I wanted to be cost effective, I could even just walk over to my enemy and hit them with a baseball bat. The opportunities are plentiful and there are so many fun ways to cause destruction.

In fact, there are so many weapon combinations and different aspects to 'Worms W.M.D' that it can be a bit overwhelming when first booting up the game. Without thinking, I jumped into an online match immediately after looking at the menus for about a minute. After all, I've played several 'Worms' games over the years, so surely I could jump right in and hold my own. I was wrong. It only took a few turns for me to realize that I was totally in over my head. There was a crafting menu that I had never seen in a 'Worms' title before, my opponent was hiding inside buildings so I had no clue where he was, and I had quickly lost a match that I was never really competitive in. 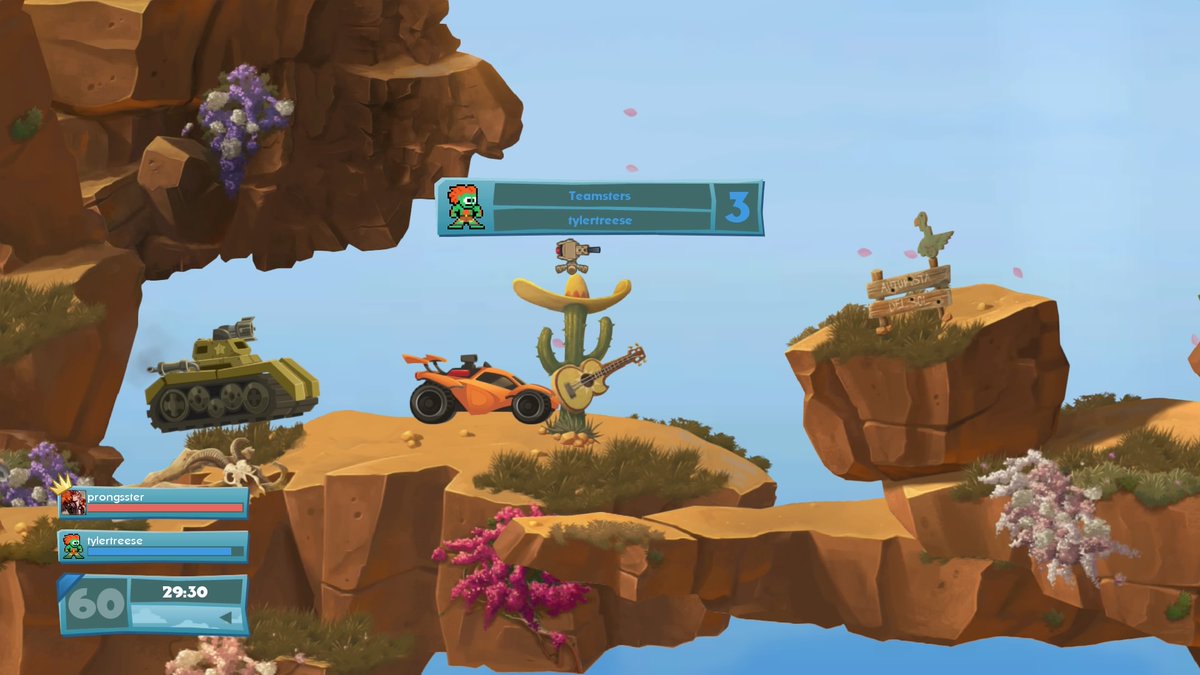 Thankfully, Team17 has put together a really great tutorial to walk players (both new and old) through all of 'W.M.D's additions. Everything from basic movement to piloting a helicopter is covered in a series of fun challenges, and it only took a handful of minutes for me to learn about the new systems at play. Well, most of them. There is one glaring omission from the tutorials as the game never goes over the brand new crafting mechanic that adds a new layer of depth to the game. Instead, crafting is relegated to one stage in the 30-level campaign mode (which honestly feels like an extension of the tutorial), and isn't covered as in-depth as I would've liked to have seen.

The reason why this omission is a bummer is because the crafting system is my favorite addition to the 'Worms' series in a very long time. Once per turn, I was able to dismantle weapons that I wasn't going to use (who uses the Uzi anyhow?) in order to gain materials (such as worm tears, donkey paste and special sauce) that I could then use to create weapons I actually wanted to use. So, if I was willing to sacrifice enough, I could get a powerful weapon like the holy hand grenade. It adds a new layer to strategy to 'Worms,' and it also gave me something to do while my opponent was taking their turn. Since turns can last up to 90 seconds, it's nice that I actually have something constructive to do other than checking Twitter constantly. 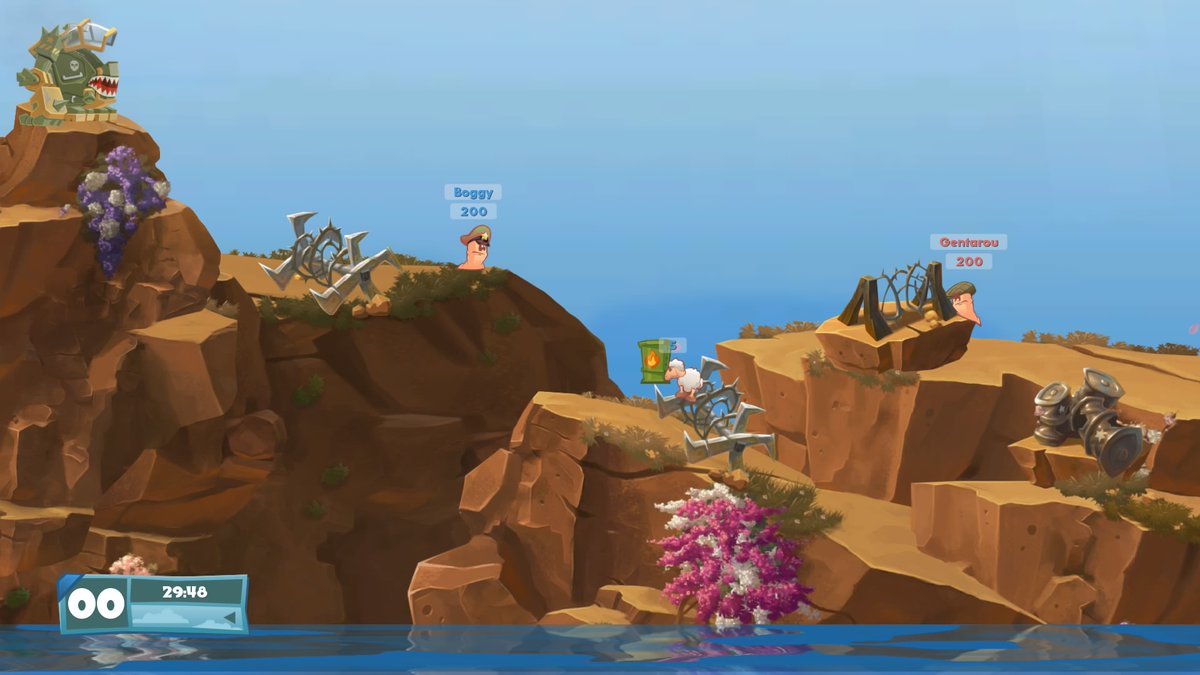 While a lot is new here, 'W.M.D' is still unabashedly a 'Worms' game. The over the top voice acting is still present, tiny soldiers swallow a grenade before they die in order to go out with a bang, and the cartoon violence is as over-the-top as ever. Just like previous entries, the gameplay loop has players taking turns moving a single unit across the field and getting to pull off one attack. This repeats until one team is left standing on top of the gravestones of their foes.

This combat loop is where 'W.M.D' truly shines. I spent a lot of my time with the title playing against friends of mine online, and the matches quickly devolved to where it wasn't about winning. No, it was about coming up with the most elaborate ways to embarrass a buddy. Who needs a bazooka when you can send a flying sheep on the offensive? That was the mindset I had while playing, and while it probably backfired more often than it succeeded, I had a blast even when I was losing. Whether I won or lost, there was always one constant — 'Worms' was just a joy to play.

Since the core gameplay is so fun, I was thrilled when I dived deeper into the package besides just 1 vs. 1 multiplayer matches (even though that's probably where I'll spend the most of my time). A campaign mode is available with specifically designed levels set to teach the player lessons (for example, a helicopter can potentially take out 5 enemies in a single turn if the stars align), and hidden within these levels are wanted posters that unlock levels in the game's challenge mode. This mode has the player taking on a single difficult to kill worm (due to them either being invincible or just in a hard to reach location), and it basically becomes a giant puzzle that the player has to solve. It's a brilliant way to add a new type of experience while also being within the framework that 'Worms' already has on offer. 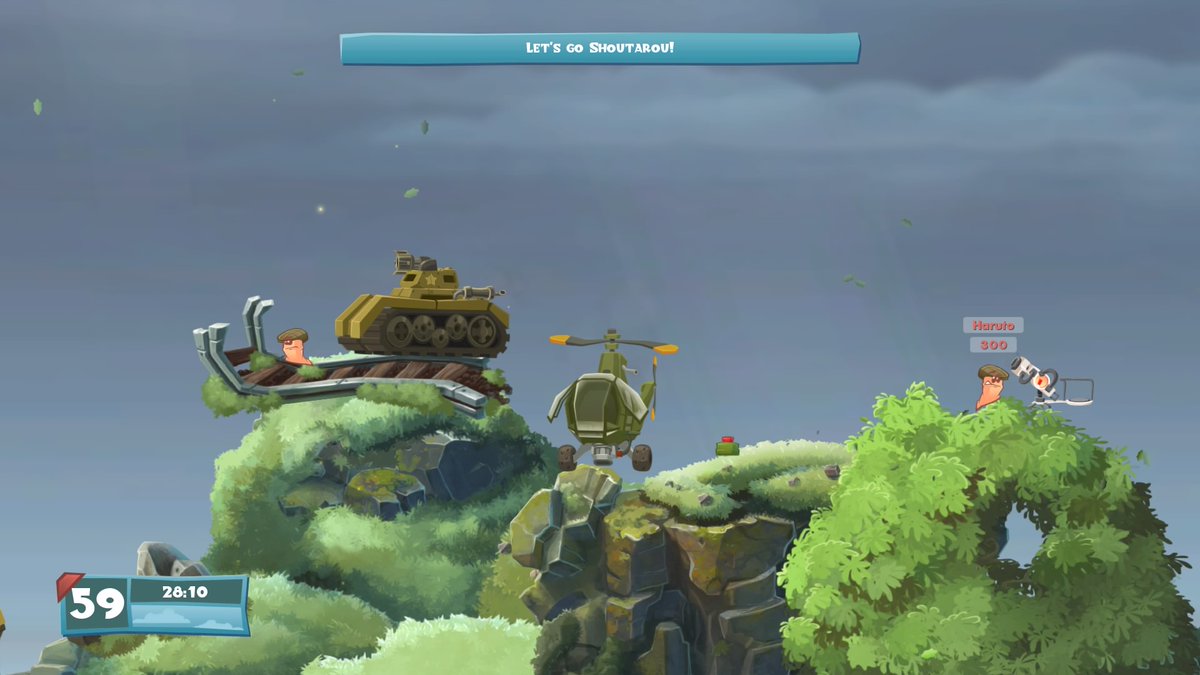 Due to these new additions and the overall package being rich with content, 'Worms W.M.D' is a huge step up from its predecessors. That said, there are still several issues present. The biggest one is that the movement is still very awkward, and it's not uncommon to waste an entire turn trying to navigate the uneven geometry of the randomly generated levels. Despite this jankiness that often saw me attempting the same jump several times until I eventually got it, I couldn't help but laugh about it. I wasn't annoyed, and I'm not even sure I would want the movement to be fixed.

For as frustrating as it can be, that movement is basically 'Worms' in a nutshell. Nothing ever goes according to plan, it's slightly annoying, but it leads to hilarious situations. I've bounced off a wall into the bottomless sea many times while playing 'W.M.D,' and yet it just added to the charm of the game. There is a flawed quirkiness to the whole experience that I honestly wouldn't want to change.

One issue that does need to be addressed is the user interface. The text in the game is way too small, and I initially had issues figuring out what weapon I was picking. There is no reason for the weapons menu to take up such a small portion of the screen, as other titles had a much larger interface. It seems like 'W.M.D's interface was designed to be played on a PC, and it was never adapted for a television screen. 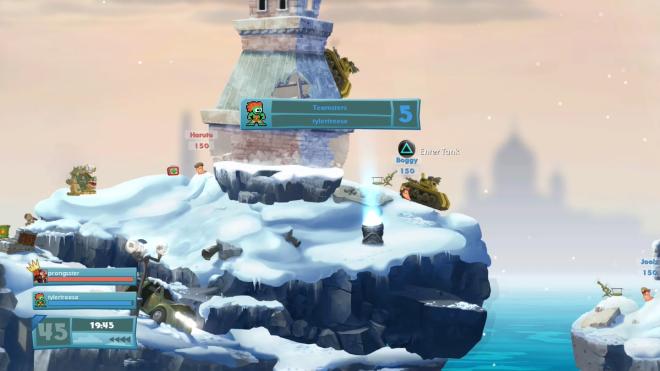 Recent 'Worms' titles have featured 3D graphics. Most of the games looked fine, but some of the charm was lost as they came across a bit simplistic and simple looking. That isn't the case in 'W.M.D' as Team17 has gone with a hand-drawn 2D look that is gorgeous to look at. Everything from the characters to the backgrounds are detailed, and are brimming with personality. 'Worms' is back to feeling alive, and it impacts the entire game positively. 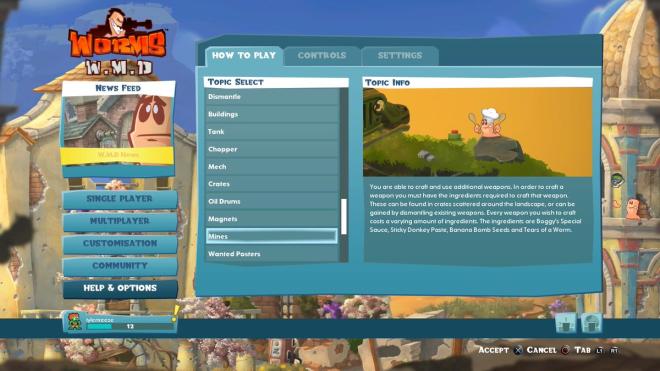 'Worms' looks and plays like a wacky Saturday morning cartoon, so it's only fitting that it sounds like one too. Every powerful explosion has a light-hearted feel to it, and I've never heard gunfire that sounded so playful. The voice acting is just as ridiculous as previous entries, as there are well over a dozen different voices you can choose ranging from rappers to an English police officer. Everything in 'W.M.D' sounds appropriately ridiculous.

The price point for 'Worms W.M.D' might seem a little high at $29.99, but I know that this is a title that I'm going to continue playing with my friends for months to come. There are too many different multiplayer variants, and the game is just too fun for us not to play. Team17 has really done an excellent job of making sure this game is filled with content.

Rounding out the package is a plethora of multiplayer variants that are a lot of fun to mess around in. While I prefer going up against one other opponent, there are other modes that have up six teams battling it out. Things get even more chaotic, and it's a nice divergence from the more tactical play. Private matches also gave me the freedom to tweak the rules (everything from weapon loadouts to how much health characters have). By changing these rules I find a new way to have fun with 'W.M.D' each time I play it. 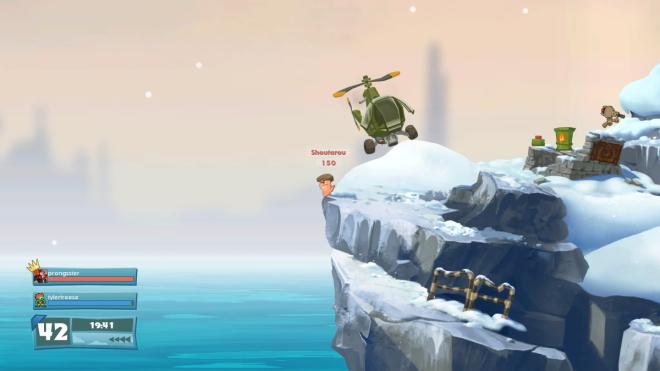 'Worms W.M.D' offers up some of the best multiplayer fun available on PlayStation 4. It's dumb in all of the best ways, from its ridiculous voice acting to the farting grandmother that I often used (unsuccessfully) as a weapon. There are a few rough edges, such as the platforming, but whenever I would die due to an unfortunately timed jump I always ended up laughing. If Team17 have accomplished anything, it's that they have made a game that always leaves me chuckling with a grin on my face even when I was dealt a raw hand.