The Game Itself
2 Stars
The Video: Sizing Up the Picture
2.5 Stars
The Audio: Rating the Sound
3.5 Stars
Replay Factor
1.5 Stars
Bottom Line
Skip It

Steam version reviewed. Review time was focused on controlling 'Shiny' with a 360 controller.

'Shiny' is the first game from Garage 227, a Brazilian studio also working on 'Dead Flowers'.

'Shiny' is a platformer from the old school. There are very few button presses besides movement, jumping, and the occasional manual checkpoint. Movement is limited to left and right on a 2D plane, with a huge amount of catwalks and platforms to maneuver. If 'Shiny' has a gimmick, it's clearance. Many jumps can't be done at full power; I had to tap the button very softly or my little robot guy's head would crack against a wall and I would plummet to my doom. 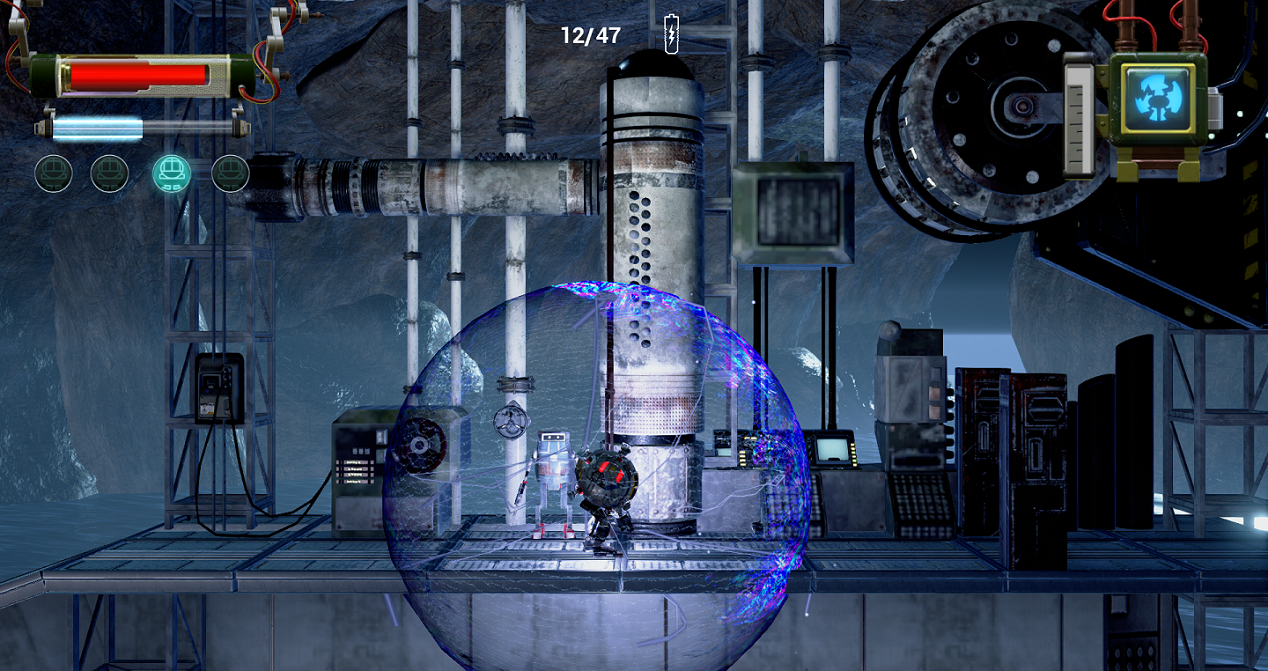 The little robot guy is Kramer 227 and he's one of the last few functioning robots on the planet of Aurora. The planet has been abandoned by humans to die a fiery death in the nearby star. On top of this, all of Kramer's mechanical buddies have had a sudden power loss. Kramer has to jump and sprint around the planet to revive his bros and escape Aurora, even while rocks are falling on his head and huge waves of lava are pouring along behind him.

This is nothing if not an exercise in minimalist game design. There is very little to distinguish 'Shiny' from a late 80s/early 90s platformer except there's less to do here. Even the time-honored tradition of the collectible power-up has been passed over, and in its place is a bunch of batteries that do little for Kramer. There is an ultimate ability that can be activated by collecting enough batteries and then pressing Y, but I have no idea what it does except launch me straight into a bottomless pit (the game does a poor job of explaining any mechanics). A few levels into the game I was given a rechargeable bubble shield to protect me from rocks and the like. Curiously, using the bubble shield depletes my health, which is exactly what happens if a rock hits me. Perhaps I'm missing the point of the shield, but because it has the same effect as the bad things, I'm going to avoid it right along with that ultimate power. 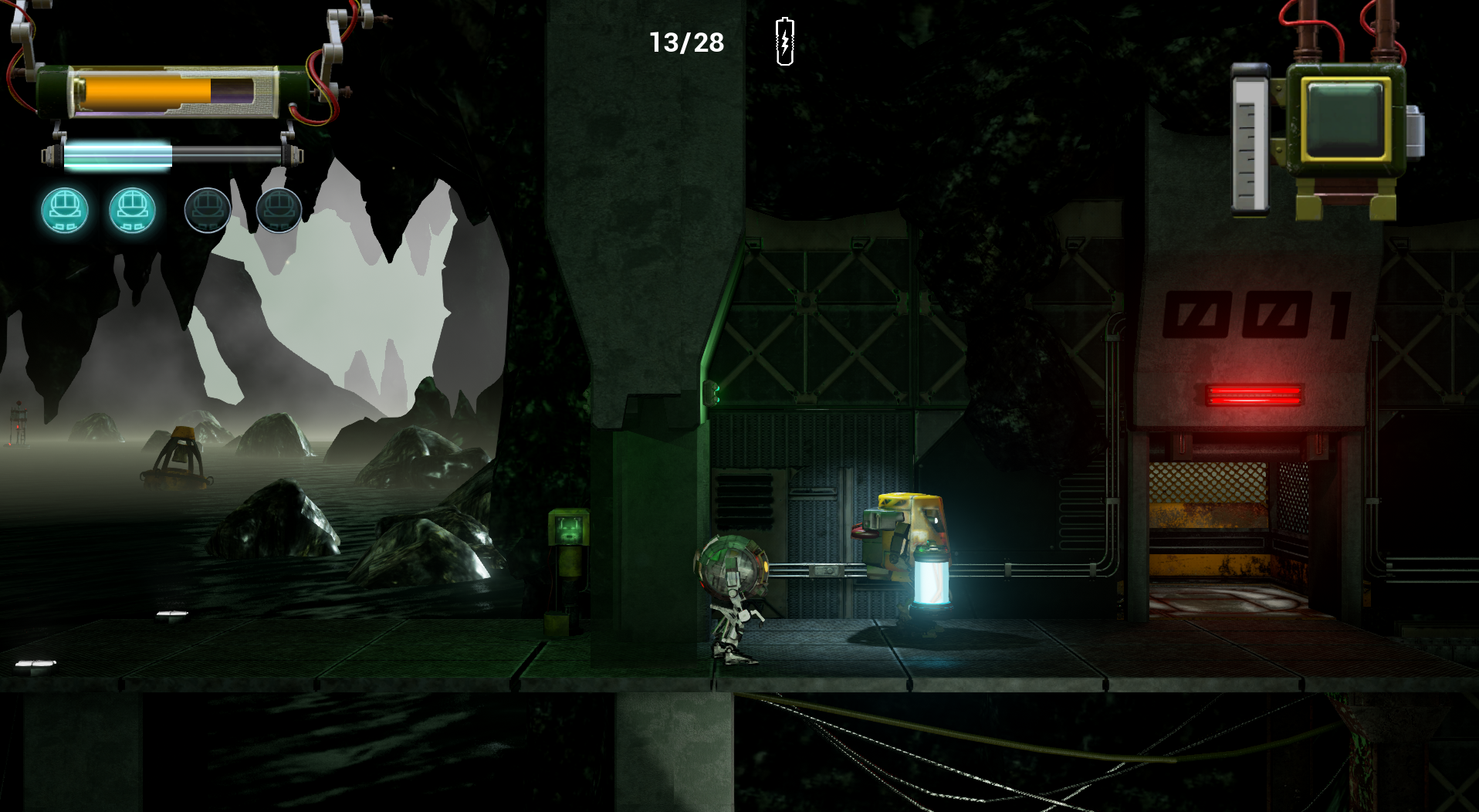 Adding to the bewildering powers is an equally strange checkpoint system. At sporadic points throughout each level are boxy machines that serve as checkpoints, and each one has a limited number of lives. Should Kramer die, he respawns at the checkpoint, at least until the number of lives runs out. If that happens, the entire chapter must be restarted. I am aware that in the old days it was important to pay attention to lives, because of the arcade influence and all that, but nowadays a system like 'Shiny's comes off as quaint and inconvenient. Further, everything Kramer does reduces his battery, including walking and jumping, turning every level into a timed mission. 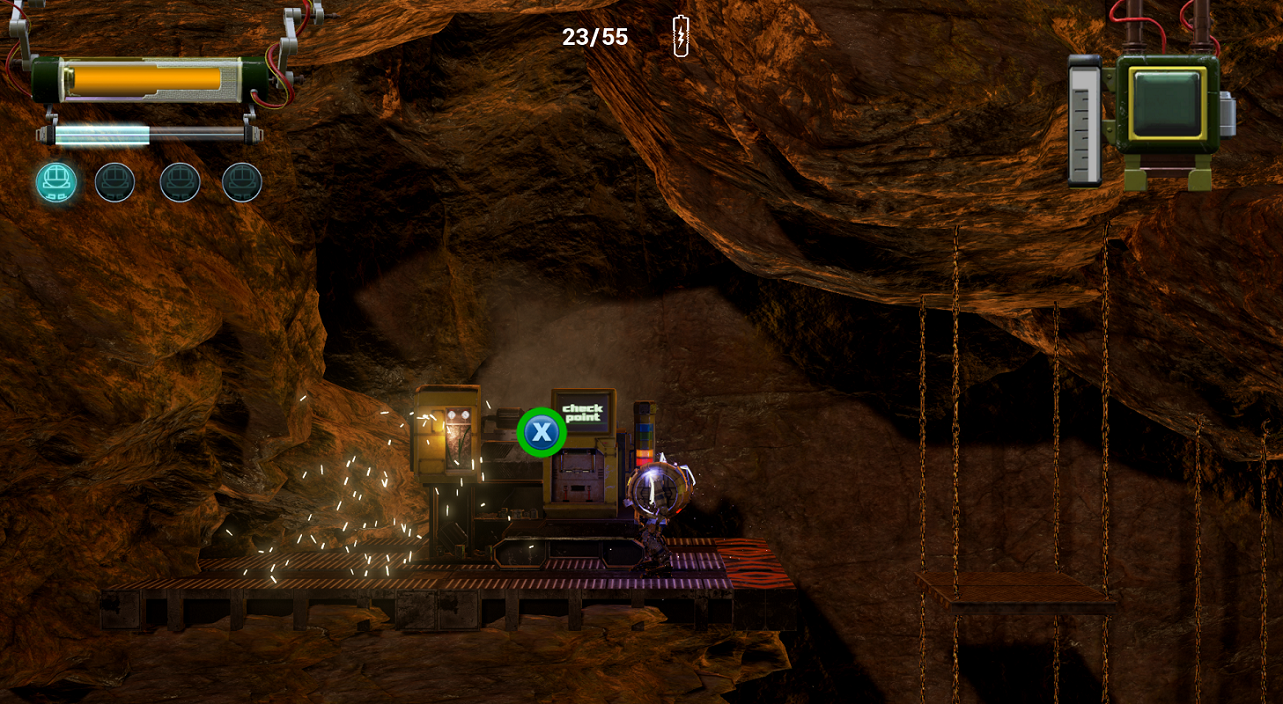 There's not much about the platforming that gets me excited. Games like '20XX' and 'Adventures of Pip' have managed to innovate some fresh features while retaining the bygone spirit of such games, but 'Shiny' merely jumps from one platform to another, and clumsily too, because Kramer has this little stutter-step he does when he lands that can easily throw off my balance. He feels too heavy for the precision that is required to land most of these jumps, like there's the tiniest bit of lag in the controller, but it's enough to feel lethargic. The clearance factor during the platforming is a pain but is the only thing that shakes up the variety in jumping, except for perhaps the occasional wall of fiery rocks from the left side of the screen, turning the rest of the level into a sprint to avoid it.

There's no storyline except for a very brief, mostly nonsensical cutscene at the very beginning, which has Kramer carrying out his duties as a battery mover (I think). I don't know why Aurora has sudden power issues or why the other robots have collapsed, but most levels have four of them for me to find. They're not hard to find but there is no incentive for picking them up, either in gameplay or story value. 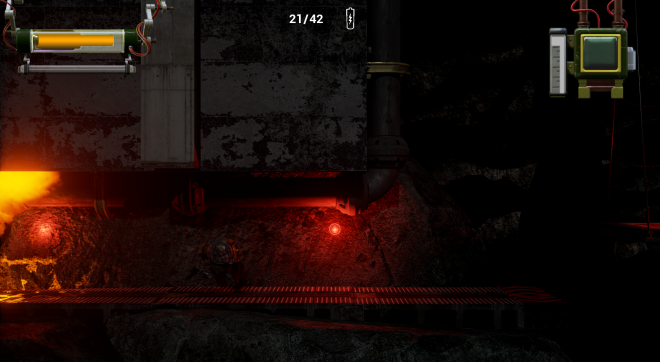 Kramer's model looks decent in its kind of junky robotness, with a higher level of detail, but the same cannot be said for the rest of 'Shiny'. Animation is simple and the textures are bland and scratchy, even on the highest settings. Edges are rough and the UI is blocky and fuzzy. Dealing with the camera is a struggle because it has a hard time keeping up with Kramer's fast movement, and would be very convenient if it zoomed out a bit automatically during the larger levels. The framerate stays at or around 60 for most of the runtime. 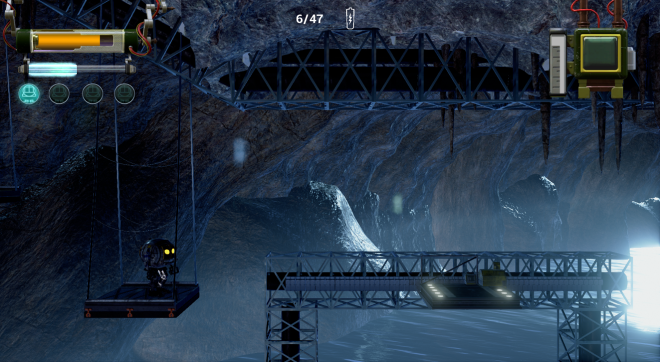 The audio is the bright spot of 'Shiny', at least the score. It manages to achieve the bright nostalgia that the rest of the game tries so hard to evoke, adding an emotional element to the few poignant instances where Kramer helps his buds. The mechanical, industrial sound effects are on the generic side.

'Shiny' is very short, with only twenty levels that can be zipped through. There's not much in the way of Easter eggs, hidden areas, or alternate pathways. 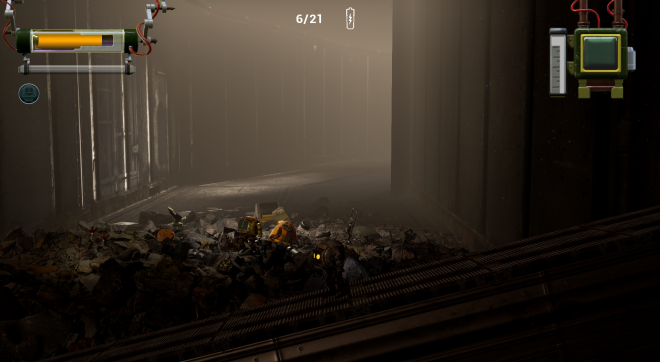 'Shiny' is very lightweight, too lightweight for its own good, in fact. It wants to tap into the ongoing retro platform revival that's so popular in the indie scene, but is a clunky, clumsy imitation without many redeeming qualities.