'Armello' is the freshman project by Australian indie company League of Geeks. It was Kickstartered in 2014 and released on PC last year. It is now available for Xbox One and PS4, with a tablet version in the works as well.

'Armello' is among the rarest of genres: a board game video game. Of the nearly 200 games I've reviewed since starting at HDD, I can remember only one other offhand: 'Hand of Fate', which is also Australian in origin, incidentally. Of course, the concepts of board gaming are very popular in video gaming, especially in turn-based series like 'XCOM' and 'The Banner Saga'. 'Armello' pulls in mechanics from those games and slaps on a few others for good measure, like cards, dice and even RPG-style character progression. 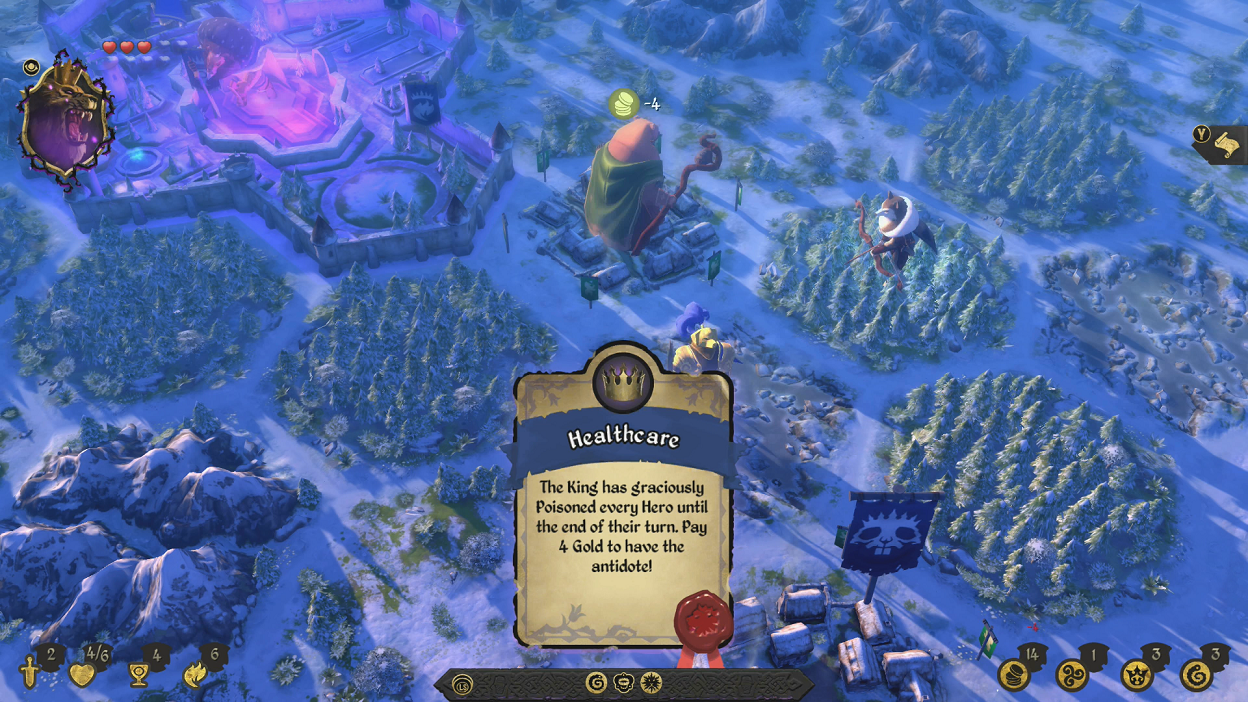 Every match of 'Armello' is on the same board and with the same rules. The only things that change from an environmental standpoint are the heroes and the hexes, the latter of which are kind of randomly generated. The hexes can be mundane things like swamps, forests, and plains, or they can offer bonuses. Settlements are owned by players and give gold every turn, stone circles heal heroes slightly and sometimes spawn spirit stones, dungeons can be plumbed for treasure, and so on. In the middle of the board is the castle, where the leonine king of Armello resides with his canine guards (it's so nice to see cats and dogs getting along). The king is infected with Rot and it has turned the kingdom into a sketchy place, full of monsters and traps. Heroes must navigate these perils every turn, avoiding or killing one another until they are finally able to confront and unseat the king, taking the crown for themselves. 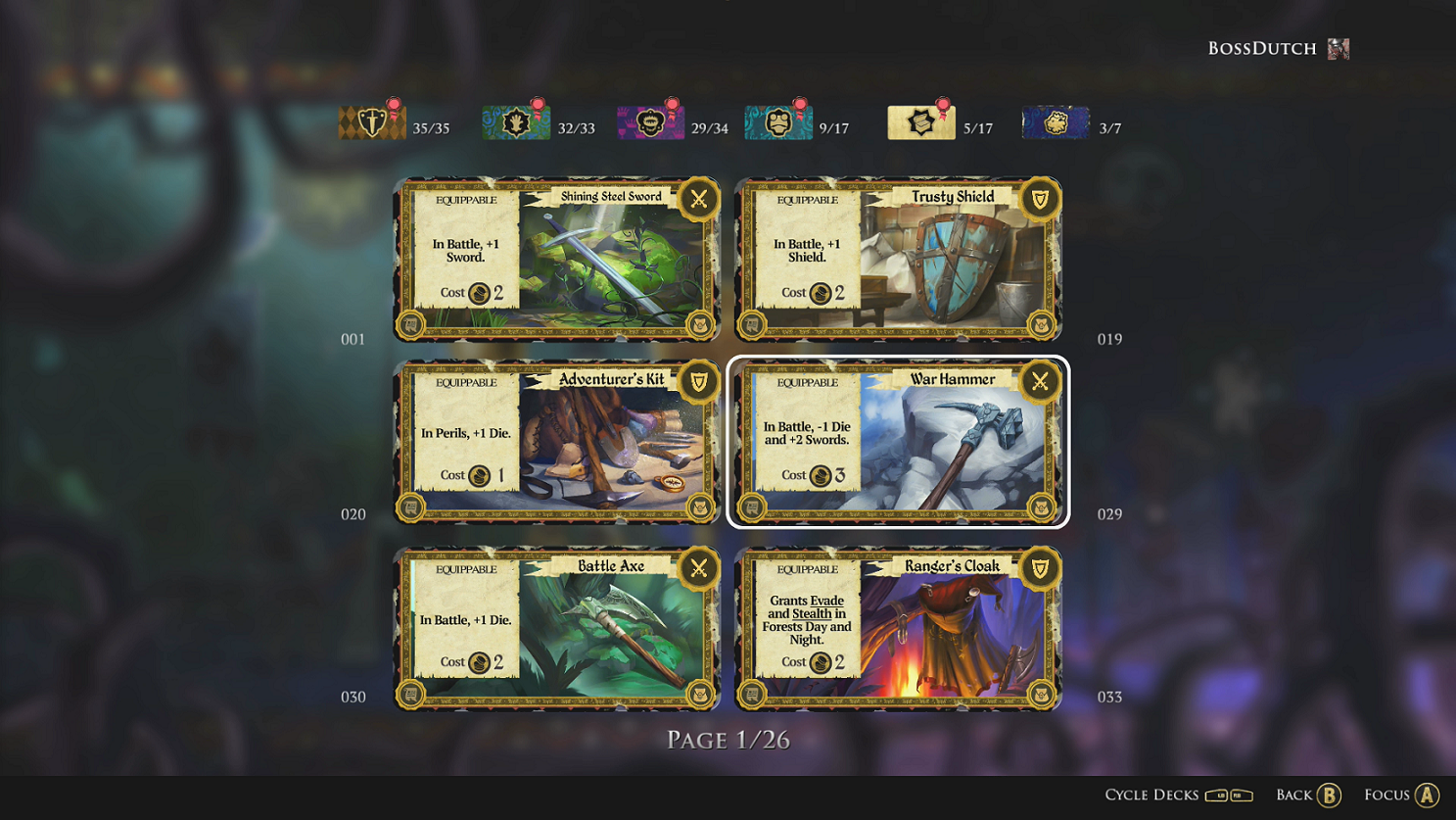 Where do the cards and dice come in, you ask? Nearly every action the hero carries out has an element of chance. This chance can change dramatically based on preparation, but it's always possible for a stunning upset that can quickly alter the flow of power on the board. During a fight, the two combatants roll a stack of six-sided dice against one another. Typically the size of the stack is determined by a hero's Fight attribute, but can be modified by equipment, followers, and negative effects from the opponent. Some dice can be guaranteed for a certain result by burning off cards in the hand that match that symbol - so, if I want more defense in a fight, I can burn off a shield card that I hadn't bothered (or couldn't afford) to equip. More cards are dealt every turn, so burning is a common and reliable technique. Burning is only a secondary effect of the cards; each one has an actual gameplay mechanic that is usually applied outside of battle. They can directly hurt other characters, set hex traps, teleport the hero, etc. 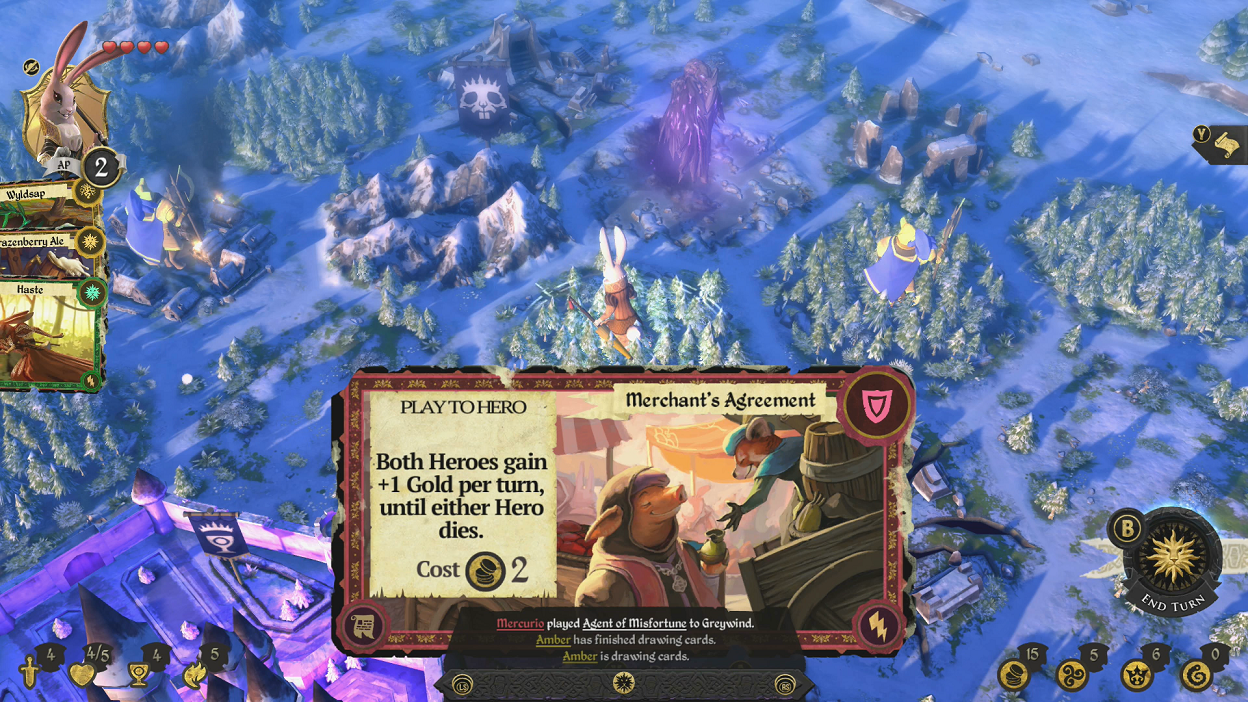 The developers have cited their influences as things like 'Magic: The Gathering' and 'Final Fantasy Tactics'. It doesn't have quite the strategic chops as a turn-based tactics game - there is only one hero per player for instance, not a party - but the hero can complete quests on the board to increase attributes and earn more dice for the many rolls that will occur throughout play. Together with the respectable roster of heroes, this permits the development of strategy that can be (and indeed must be) modified every game and sometimes every turn to keep up with the rapidly changing conditions of the board. 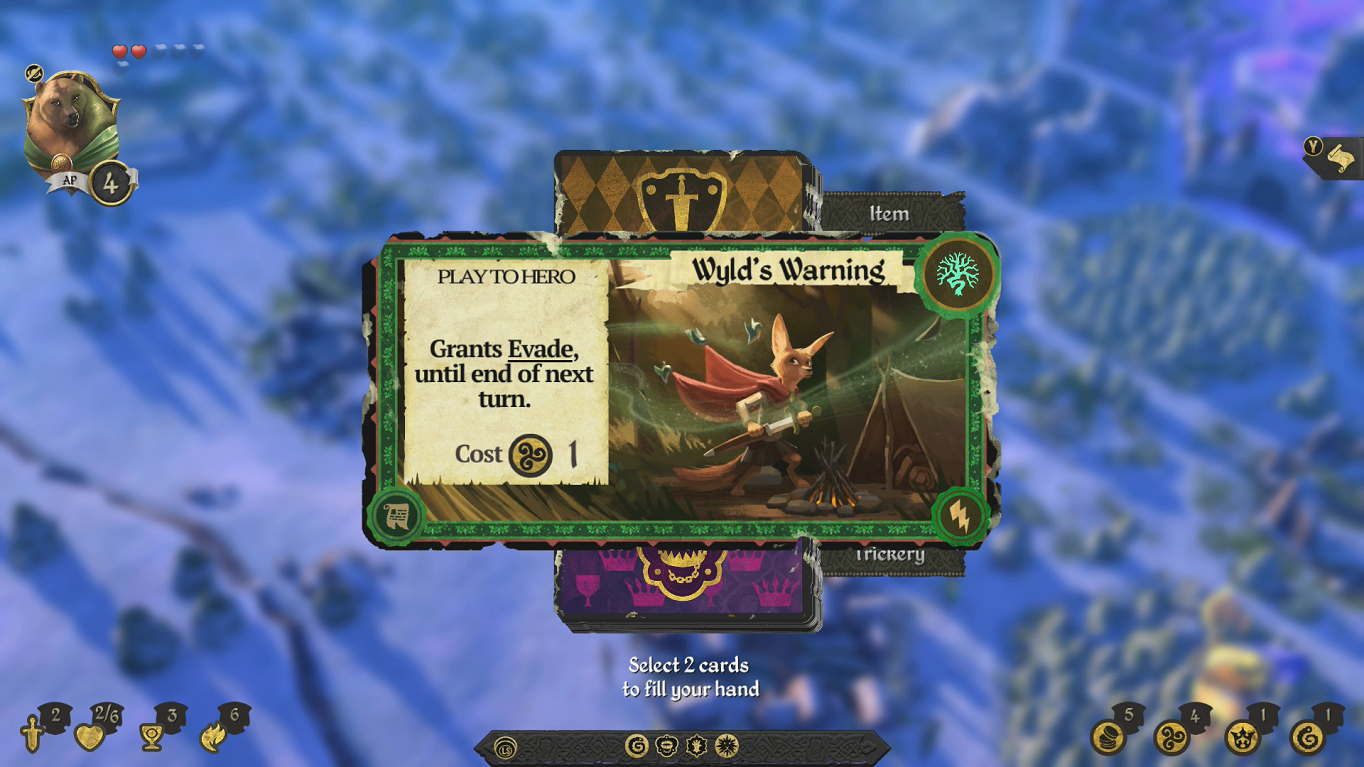 Just like with 'Hand of Fate', luck is the thing that keeps 'Armello' so fast-paced and dynamic. Every game is different, and my fortunes are often just a dice roll away from victory or defeat. While we heroes cannot control the dice as such, we have to spend each turn accumulating every possible advantage for ourselves to manipulate them in our favor, and even a single wasted move can be disastrous. It doesn't hurt that each match is in the sweet spot of 30-45 minutes, just enough to develop a good rhythm without overstaying its welcome. Heroes and cards are more or less balanced, keeping frustration to a minimum. It's tough for me to find real problems with 'Armello', but I don't care for the bias towards prestige victories. The prestige victory condition occurs when the king finally dies to rot after 18 turns, and the character with the most prestige (earned through many actions, like killing other heroes) wins automatically. It can also occur if a character has the stones to directly attack the king and they then kill each other. So, all a hero has to do is wait it out and hide from other characters and they'll probably win, as I've discovered in my matches. 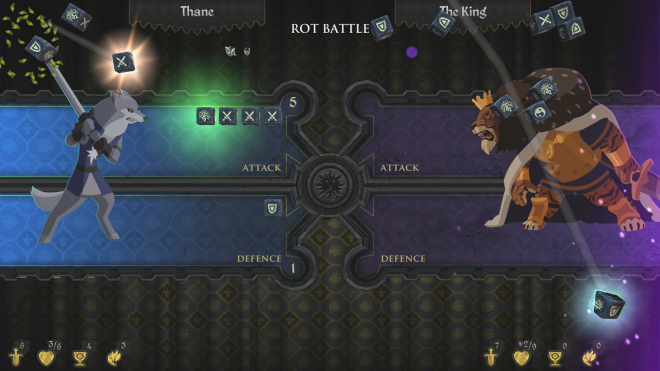 'Armello' has a fanciful anthropomorphic theme with rats, rabbits, bears, wolves, and more fighting for the glory of the kingdom. The board itself sports somewhat modest visuals, but the art design on the whole is gorgeous. There is a lovely hand-drawn opening cinematic that calls out for more, and the animated card art is beautiful. Controls have been translated to the Xbox controller reasonably well. 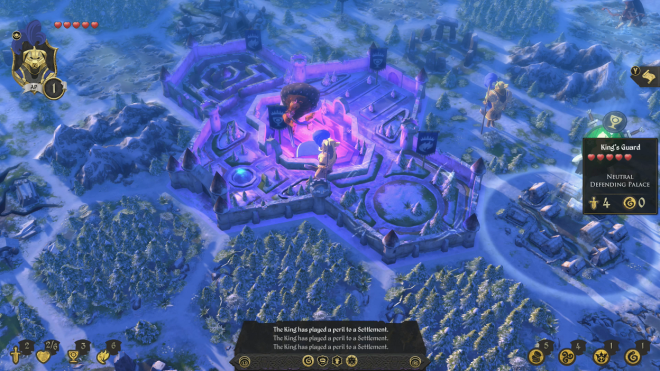 'Armello' has a great high fantasy score with a cinematic feel, giving the cartoony visuals a distinctly tongue-in-cheek quality. There is a quick-cutting dynamic mix to the music, fading in and out in accordance with the action on the board. Sound effects are quite good and voice acting is at a minimum.

Each match has the same board and rules, but players can spice it up with 8 different heroes and a plethora of amulets and rings that change the hero's statistics on each playthrough. Most of these must be unlocked by playing through the game and completing certain conditions. 'Armello' is always 4 players, but any number of these can be human. When Xbox Live matchmaking is unreliable, the AI is smart enough to provide a challenge. 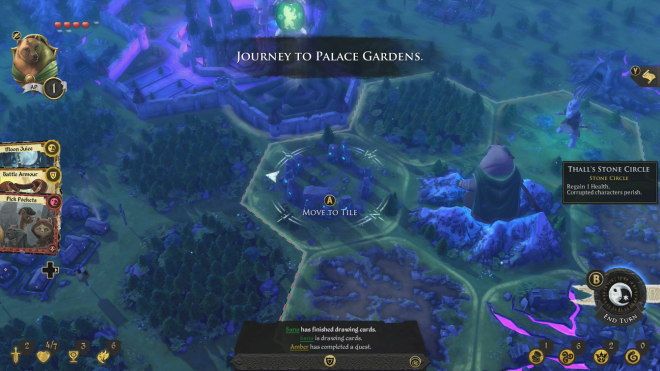 It has probably been a decade or more since I played a real board game. It's just not a medium that appeals to me. However, the unique brand of magic that League of Geeks has distilled in 'Armello' is intoxicating, and the Xbox One version has lost very little in the transition. What a wonderful and fun experience.