The Game Itself
4 Stars
The Video: Sizing Up the Picture
2.5 Stars
The Audio: Rating the Sound
3.5 Stars
Replay Factor
3.5 Stars
Bottom Line
Recommended

Previously known as 'World War Machine', 'Livelock' was one of the first accepted submissions for the Square Collective initiative, aimed at bringing indie games to market. It failed an Indiegogo campaign in 2014 but managed to survive and has been published by Perfect World for PC, Xbox, and PS4. It was developed by Tuque Games, a thoroughly Canadian studio if the name is any indication.

'Livelock' is a top-down, co-op, twin-stick shooter, and let's see if we can talk more about it without so many hyphens. There are three characters or "chassis" as they are called in this robot setting: a tank, a healer, and a pure shooter. These robot luminaries walk through large, open maps in search of enemies, little blue orbs, and of course little blue cylinders. Sometimes there are objectives too, which are themselves boring but tend to generate more enemies and blue shapes. 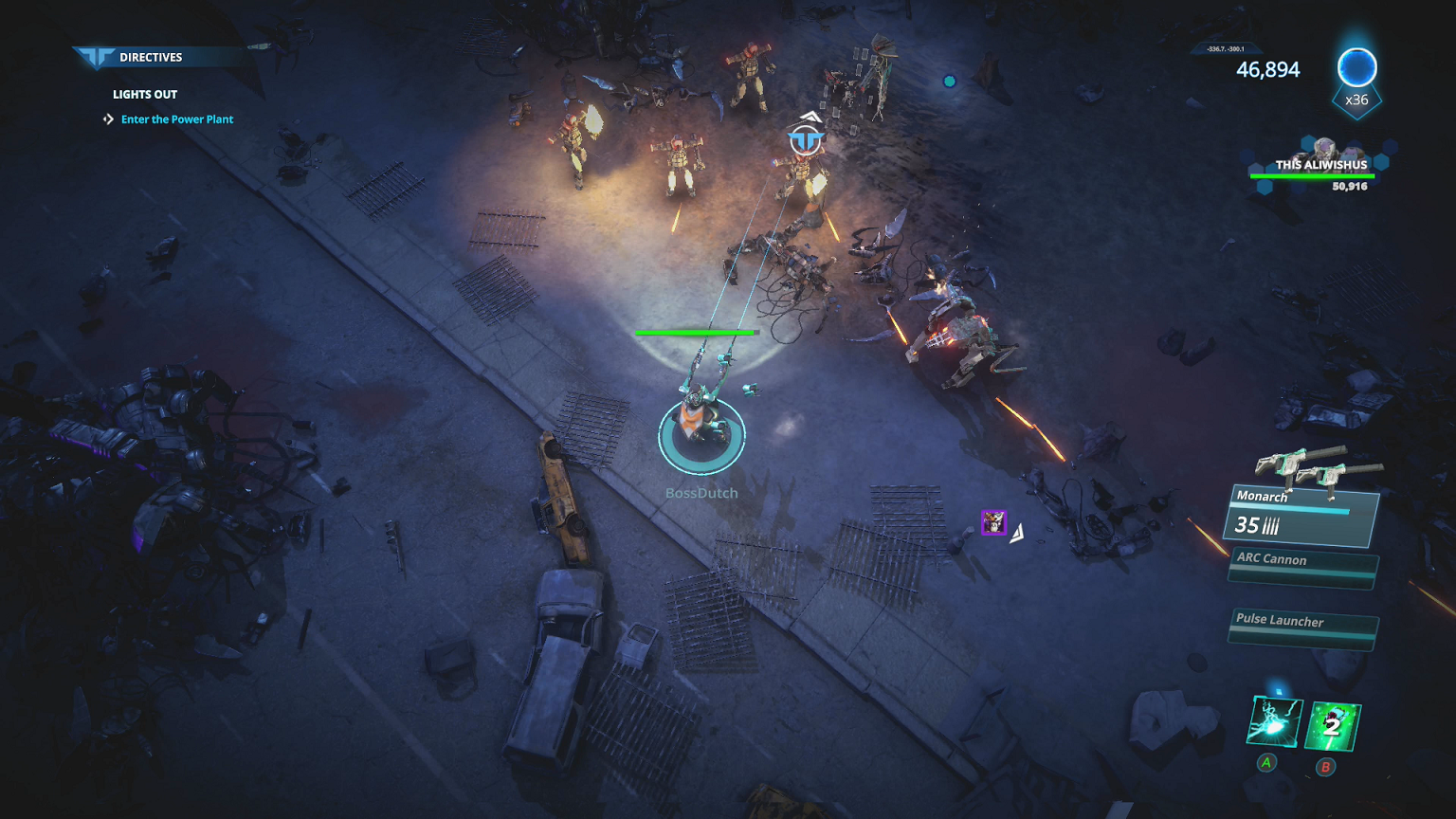 'Livelock' plays very much like twin-stick shooters of the arcade era, like 'Robotron: 2084', 'Tempest', and of course 'Gauntlet'. The screen can be filled up with massive amounts of enemies in true bullet hell format, most of which are trash mobs that can be cleared out with a single bullet but are useful for cranking up the score multiplier to insane levels. Being an arcade game, 'Livelock' puts an emphasis on post-level points values, a wonderfully old-fashioned metric that also dictates how much experience each individual chassis receives. With every level, the chassis earns more upgrades. These can be new guns, activated abilities, and ultimates. The blue cylinders are a form of currency that can buy upgrades for the guns. Each chassis can hold three weapons on a continuum of speed and power, with ammo for the most powerful being relatively uncommon. Some weapons aren't guns at all; the tank can use melee weapons with brutal efficiency if he can get into close range. The launcher weapon class is typically explosives, capable of clearing out huge groups of enemies in a single shot.

All three of the classes are fun in their own way, but I tend to gravitate towards the shooter. He specializes in killing things before they can touch the party, and has several automatic fire weapons for that purpose. He can lay down self-buffs, like a speed boost and damage penetration, which are very helpful when he's on his own. The tank can die quickly in the hands of an inexperienced player (trust me on that), but can pacify waves of mobs while his siblings support him from the flank. His initial gauntlets are pitiful and he becomes much more fun when he gets his hammer, because of its increased range. The medic is also fun, but there is a balancing issue in how her score is computed that slows down her progress (experience is awarded through kills only - not her strong suit). It's more difficult to play the medic alone, especially in the early levels when her abilities haven't been unlocked. After level 10 or so she starts to have some variety and become a reasonably self-sufficient solo fighter. She can generate autonomous drones, repair her own drones and friendly turrets, snare groups of enemies, and so on.

Solo play isn't really how games like 'Livelock' were meant to be experienced, however. It can handle up to three humans in tandem. Two is good but three is even better, when the bullets and explosions reach ludicrous proportions and the screen is so full of bad guys and projectiles that it's difficult to distinguish anything. The chaos is what makes it fun, and when the three players are cooperating and coordinating their abilities, it makes for nearly perfect multiplayer action. 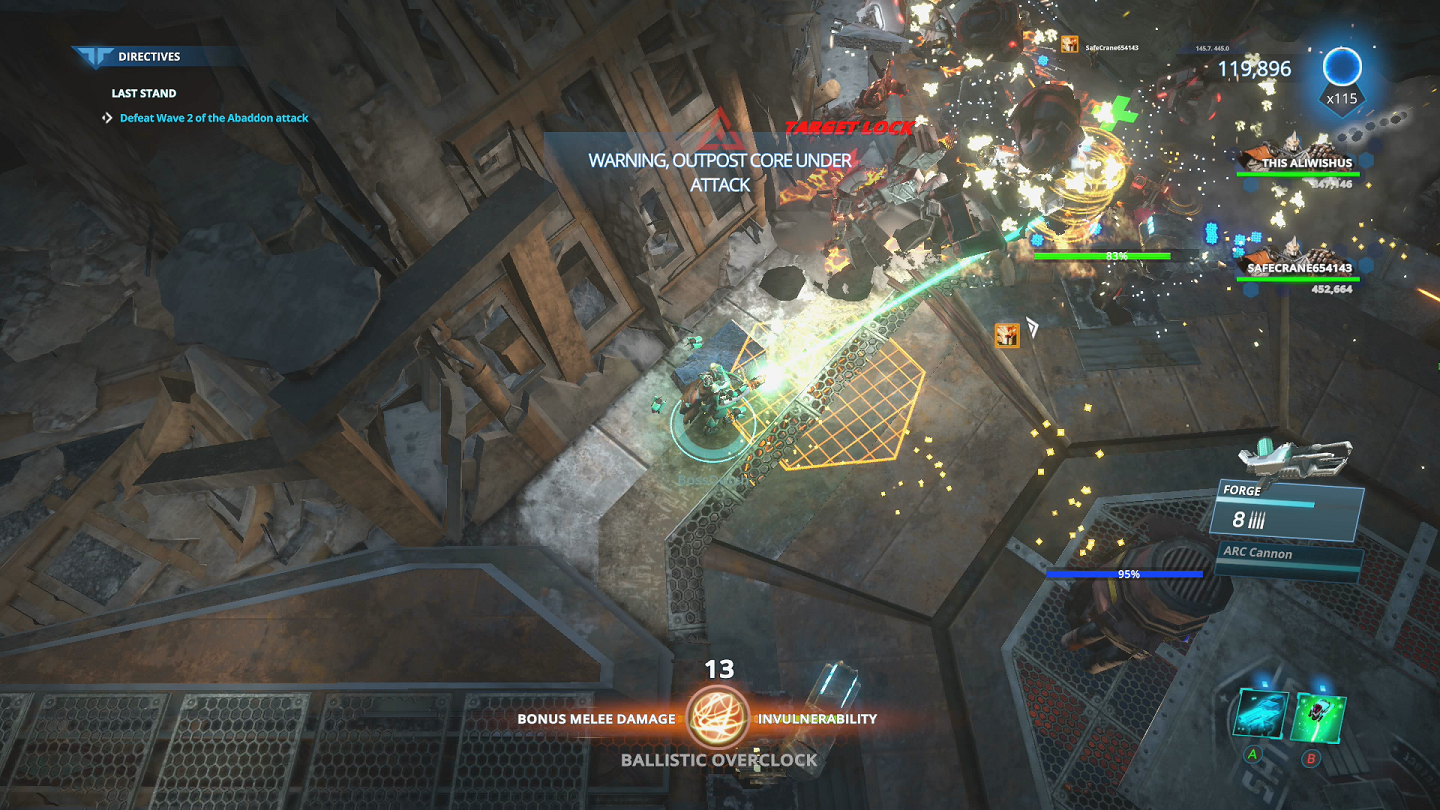 'Livelock' is not without its limitations. I want more chassis, more guns, customization, ultimates, levels, upgrades, robot abilities that synergize with those of other players, etc. In a way I suppose that's a good thing about it - it does what it does well, well enough that I want it to keep expanding with content. It's also conducive to long binges of play that eat up gobs of time and content without me really noticing.

I should mention the storyline, at least in passing. The player characters are imprints of human brains copied into mechanical datacores at some point in the future, presumably after the human humans have been wiped out. These facsimiles are powerful and rare and are known as Intellects. Most of the robots in 'Livelock' are cannon fodder without self-awareness. They have been herded into violence by more powerful AIs that resent the meddling of the Intellects, who are associated with humanity and its destructive hubris. The Intellects are guided by an orbital AI called SATCOM, whose goal seems to be the eradication of the violent AIs. The narrative isn't groundbreaking but it works well enough to keep 'Livelock's campaign moving forward. 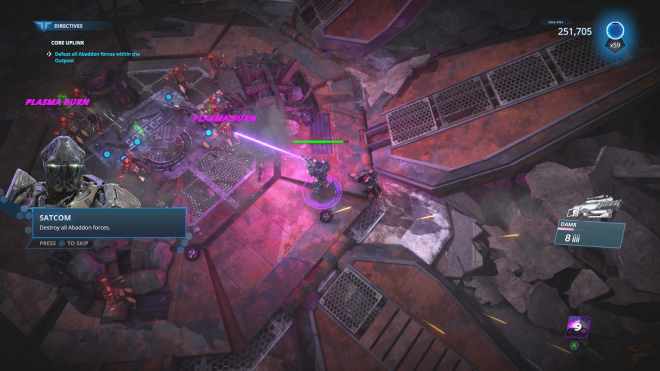 'Livelock' is good-looking (not great-looking) with an overhead camera that is far away from the action, by necessity. The chassis models look very nice in the pregame customization menu, but much of the detail is lost during actual fighting, and it's the same for enemy models. There is a high level of environmental physics, enough to depict many structures being blown up or knocked down as the robots fight. Sadly, the framerate suffers during some of the more intense fights, and plummets when a new player joins, if only for a short time. 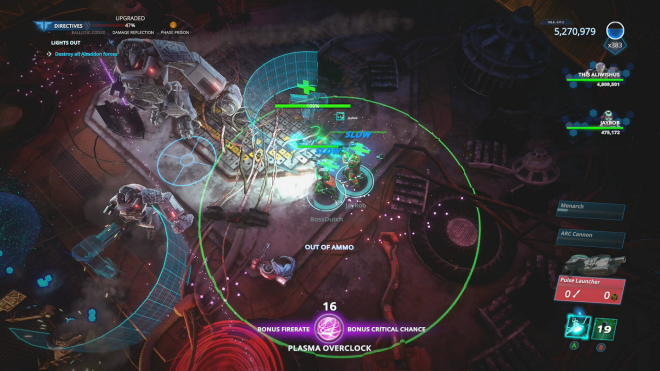 'Livelock' has a suitably cybernetic soundscape, and fitting high-octane music to go along with the action. It is difficult to hear under all of the shooting, though. The voice acting is campy, especially SATCOM's super nasal delivery, but I like most of the cheesy jokes.

There is a long campaign over several acts, and the chassis can be swapped out between each mission. Missions are in the easily digestible 10-20 minute range, depending on the number of players and the difficulty. There is a survival mode, but the lack of rewards makes it less appealing. Unfortunately, local co-op is not available. 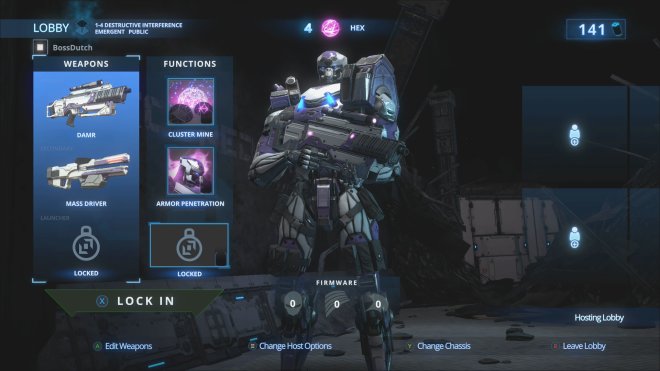 'Livelock' is a blast when played with friends. It holds its own in solo, but only for so long. The gameplay is sharp and easy to pick up and play for any level of player - I just wish it had longer legs.