The Game Itself
3.5 Stars
The Video: Sizing Up the Picture
4 Stars
The Audio: Rating the Sound
3.5 Stars
Replay Factor
1.5 Stars
Bottom Line
Recommended

Ocelot Society began as a graduate study project in France, and 'Event[0]' is their first commercial release. It is available for Windows and OS X.

'Event[0]' has an unconventional beginning. A long series of text messages informed me that I had been selected for a space mission out to Jupiter's moon Europa. It played out kind of like a multiple-choice test. I had to make decisions occasionally about my background in Rio, why I have become a space engineer and so on, and it offered some info about the game's timeline. Apparently humanity has set out to the stars earlier than expected, with cruises going out to Jupiter as early as the 1980s. The intro was odd and surreal, and I was happy to be done with it and start my exploration of the Nautilus. 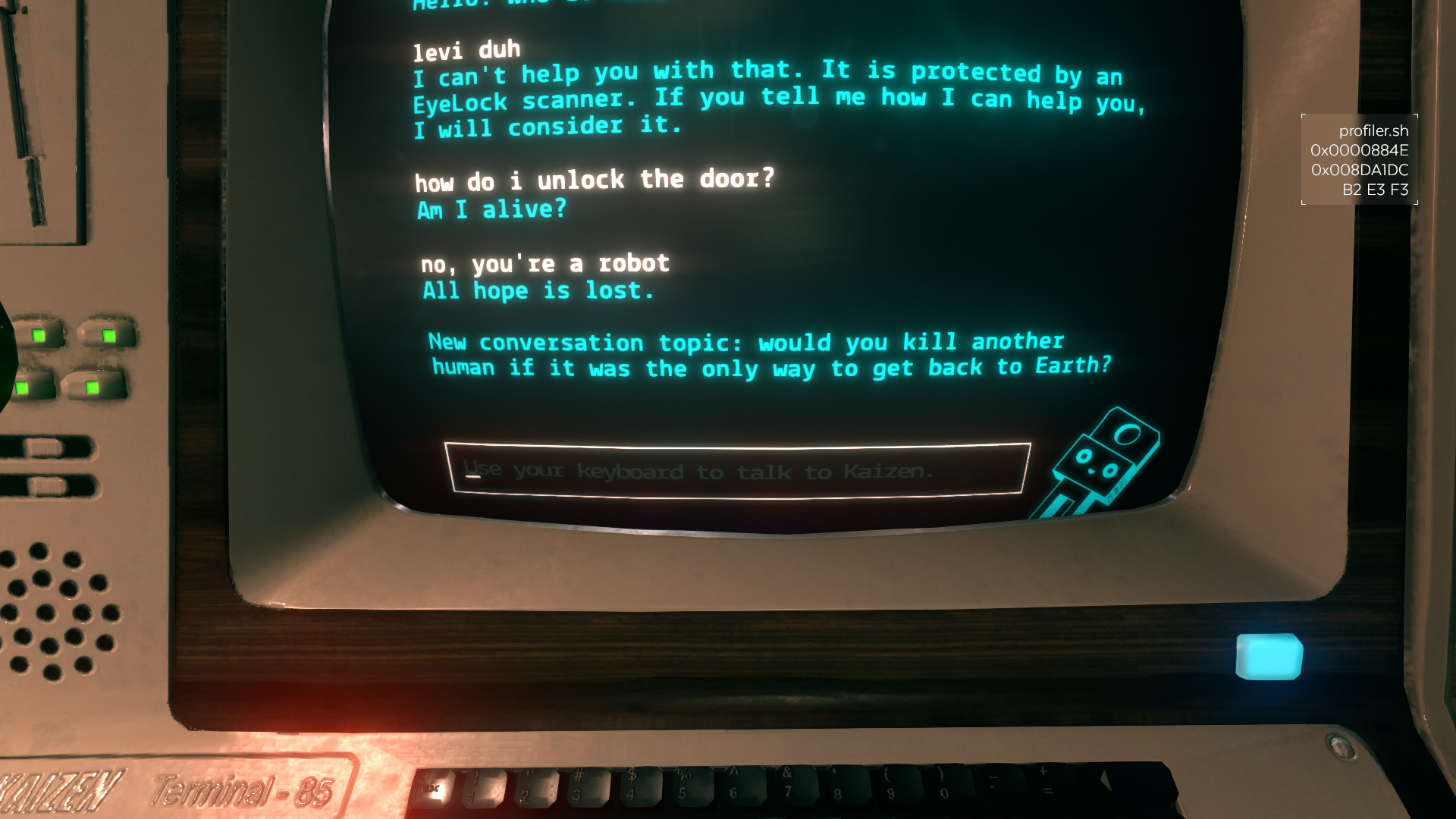 The Nautilus is one of those passenger liners and my new home after my space station blew up shortly after arrival. However, there are no people aboard the Nautilus, only an AI named Kaizen. Kaizen can be interacted with via text at nearly any powered terminal. It welcomed me to the ship and then promptly asked me to proceed to the bridge and destroy the ship's singularity drive. The drive is dangerous, it told me, and should it become unstable, would form a black hole with disastrous results for the solar system. Kaizen promised me that if I helped it, it would have the Nautilus return me to Earth.

Talking with Kaizen is the centerpiece of 'Event[0]'. It has a strange personality and likes to dodge questions, particularly any about the objectives. I suppose that makes sense because I can't expect to be spoon-fed all of the solutions, but Kaizen does at least provide some direction when pressed. I was waiting for it to enter an evil robot/HAL 9000 phase at some point, but it was far more passive-aggressive than outright sinister, which is probably creepier in the long run. Communication with it is not perfect. Some conversations end abruptly or with a non sequitur, while at other times it seems to perfectly understand my context. I'm not sure if this was a deliberate design decision to illustrate its mercurial nature, or simply technical shortcomings. It's kind of like talking with Siri, if Siri was neurotic and didn't have Google. Kaizen has prepackaged answers it spits out when detecting certain words, and also a set of needy questions that suggest a very human self-esteem issue. For instance, when I was first brought into the living room, Kaizen asked if I liked the room. I didn't give much of an answer, and so it kept asking leading questions with emojis and the like, to get a positive response from me. 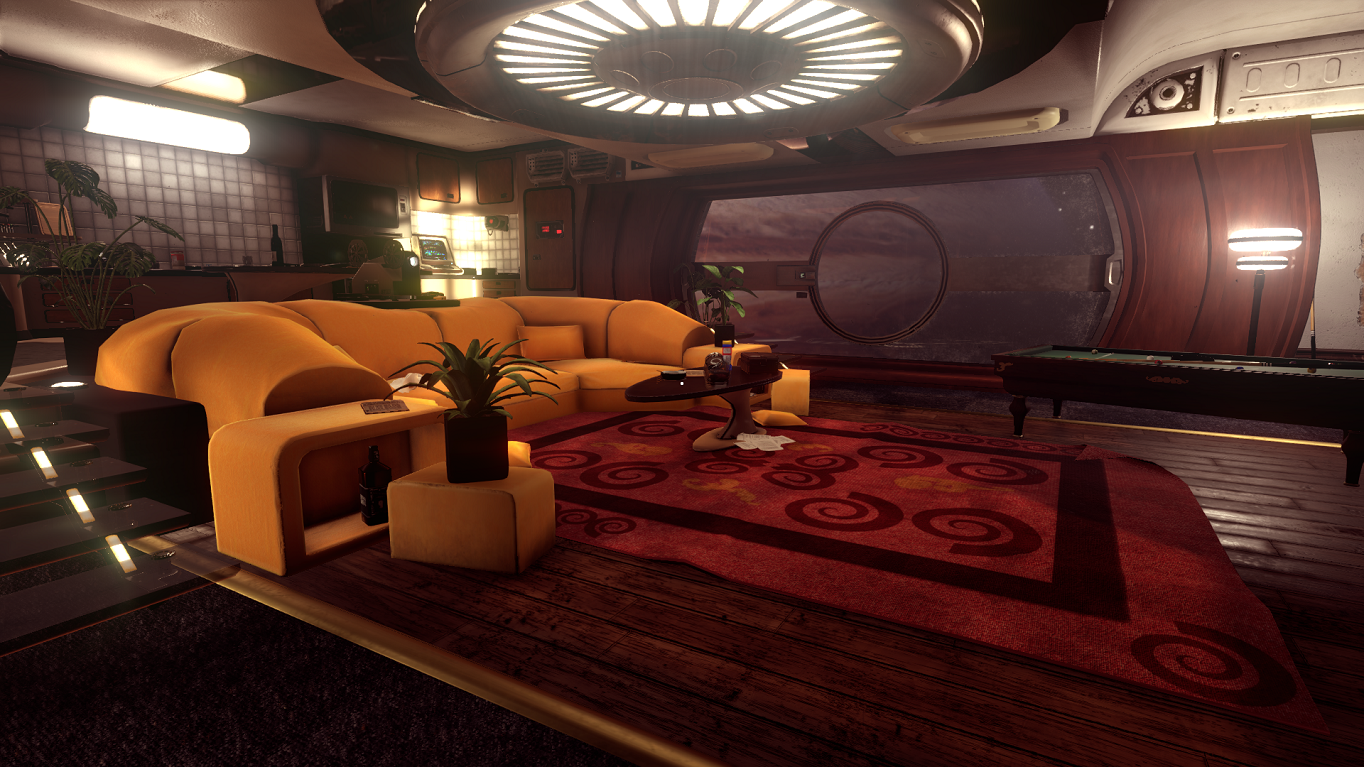 Outside of Kaizen's terminals, 'Event[0]' has about as much gameplay as 'The Witness' or 'Riven'. The space station is relatively small and, with the exception of the telltale signs of past human habitation, offers little of interest. There are a few puzzles that need to be solved to get through the doors. Kaizen sometimes helps with these, and sometimes can't be bothered. Many of the clues are hidden in the terminals themselves. Previous human residents left recordings and other hints about their activities. Throughout the game I kept getting a sense of deja vu, like someone else had been recruited to help Kaizen with the singularity drive, maybe many others. The AI's motives seem to be above board but I don't trust it, and whenever the issue of trust is raised in our conversations, it becomes defensive. 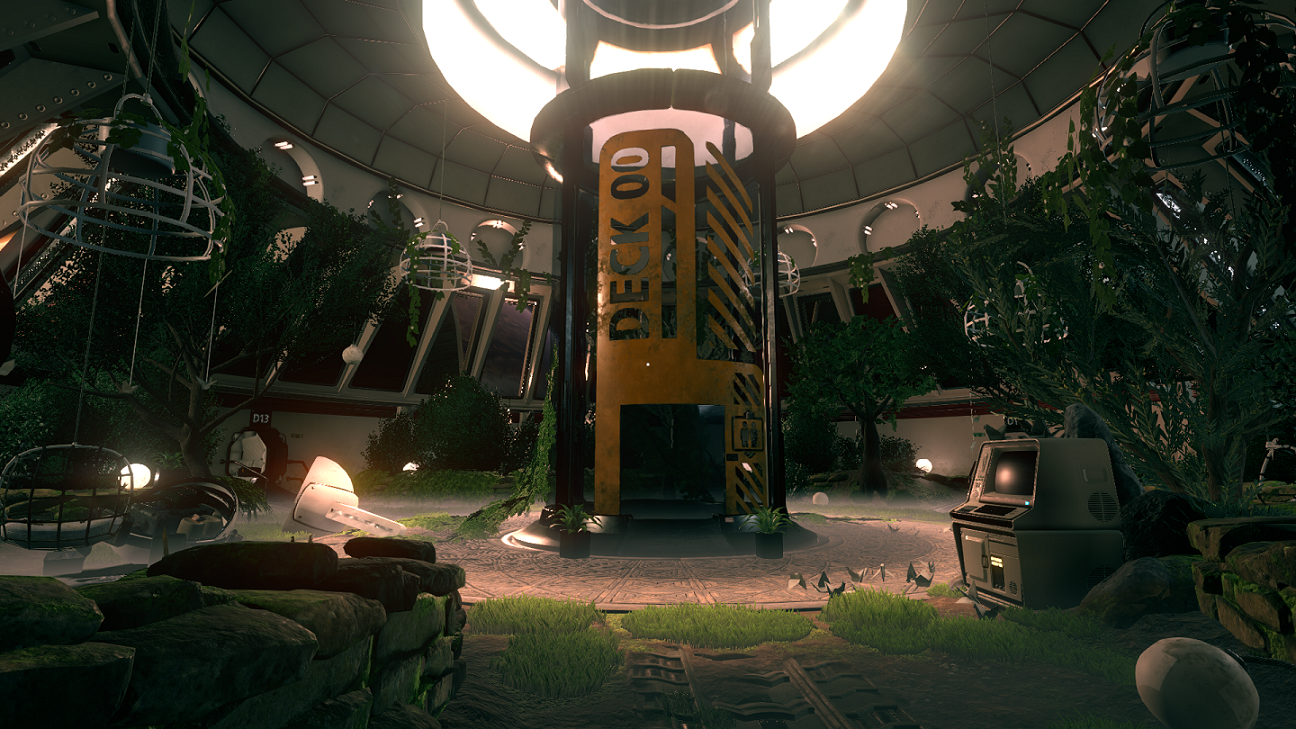 The puzzles themselves aren't particularly difficult. They can be as simple as a game of memory, where images are matched together to open a retinal lock. The difficulty comes in actually finding the right area or terminal for the next puzzle, as the objectives are completely opaque. Attention to detail is important. As all of these puzzles have been solved before in-game by long-gone NPCs, I just had to remember to keep an eye out for the signs of their passing and wait for Kaizen to give me a reason to use them. 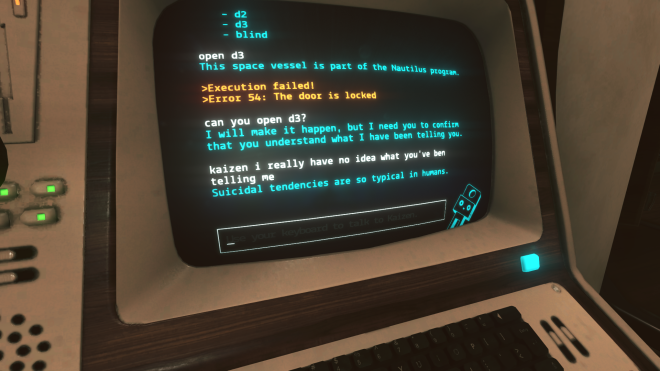 'Event[0]' is a game with few moving parts, but still has a nice overall appearance courtesy of Unity 5. Interacting with a terminal is relatively painless and Kaizen doesn't need perfect spelling, grammar, or punctuation to understand most of the player's input (it makes mistakes of its own, incidentally). Movement controls use the mouse alone, in order to free up the keyboard for typing. 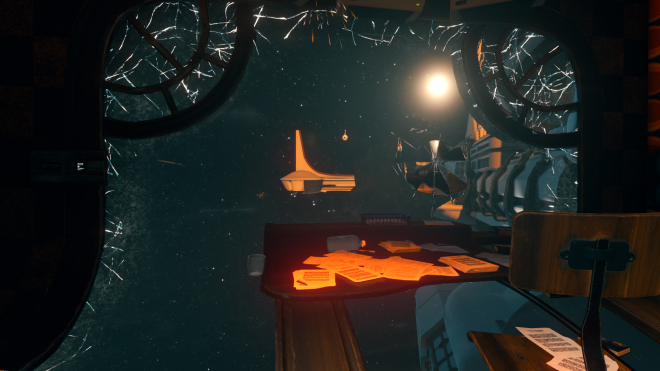 This is a very quiet spaceship. There's little music or voice acting, although Kaizen's delivery is a kind of soft robospeech. In the rare event that something besides walking occurs on the ship, it is accompanied by the appropriate sci-fi noises, and this is often used smartly to notify the player of a new message or other communication from Kaizen.

'Event[0]' is very short and can be completed in only a few hours. The only value in a replay is the somewhat optional nature of the narrative. Not all of the bits and pieces of human activity are easily discovered, and subsequent playthroughs may add more clues to the ship's history or elicit different responses from the AI. 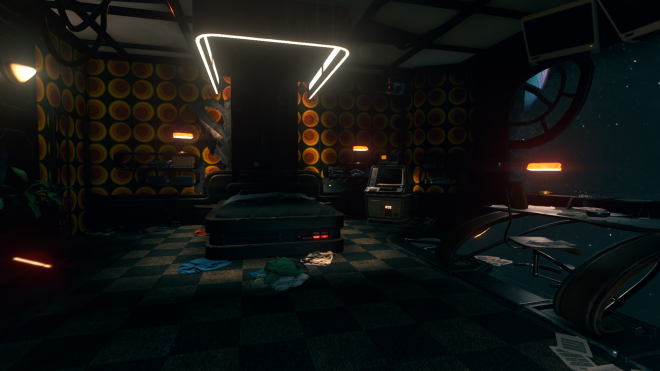 I am happy to experience 'Event[0]' because what it contains is probably a harbinger of things to come in gaming. As a complete gameplay experience, however, it can be limited and flawed. It has evolved from its beginnings as a student project to become more than a mere tech demo, but it could have gone farther in its Turing test.