The Game Itself
4 Stars
The Video: Sizing Up the Picture
3.5 Stars
The Audio: Rating the Sound
4 Stars
Replay Factor
3 Stars
Bottom Line
Recommended

My first game of 'Pac-Man: Championship Edition 2' started out much the same as nearly every round of 'Pac-Man' I've ever played. The iconic opening jingle played, I started chomping on pellets, and the oblivious-yet-menacing ghosts dashed around the maze. Then strange things started happening. I bumped into a ghost and did not die. Curiously, it was not a bug, for I soon did it again with the same result. I tapped the A button and Pac-Man jumped to his spawn point, conveniently placed next to the fruit that would continue the next stage. Clearing a stage awards another one of these jump bombs, which can be used for getting out of a tricky situation or just getting to the next level quicker.

As for the ghosts, they can be bumped several times with no ill effect. Enough bumps in a short period of time makes them angry, and angry ghosts can kill Pac-Man in a single hit just like you would expect them to (although the player starts with several extra lives). They only stay angry for a short period of time, and resetting the stage also mollifies them. 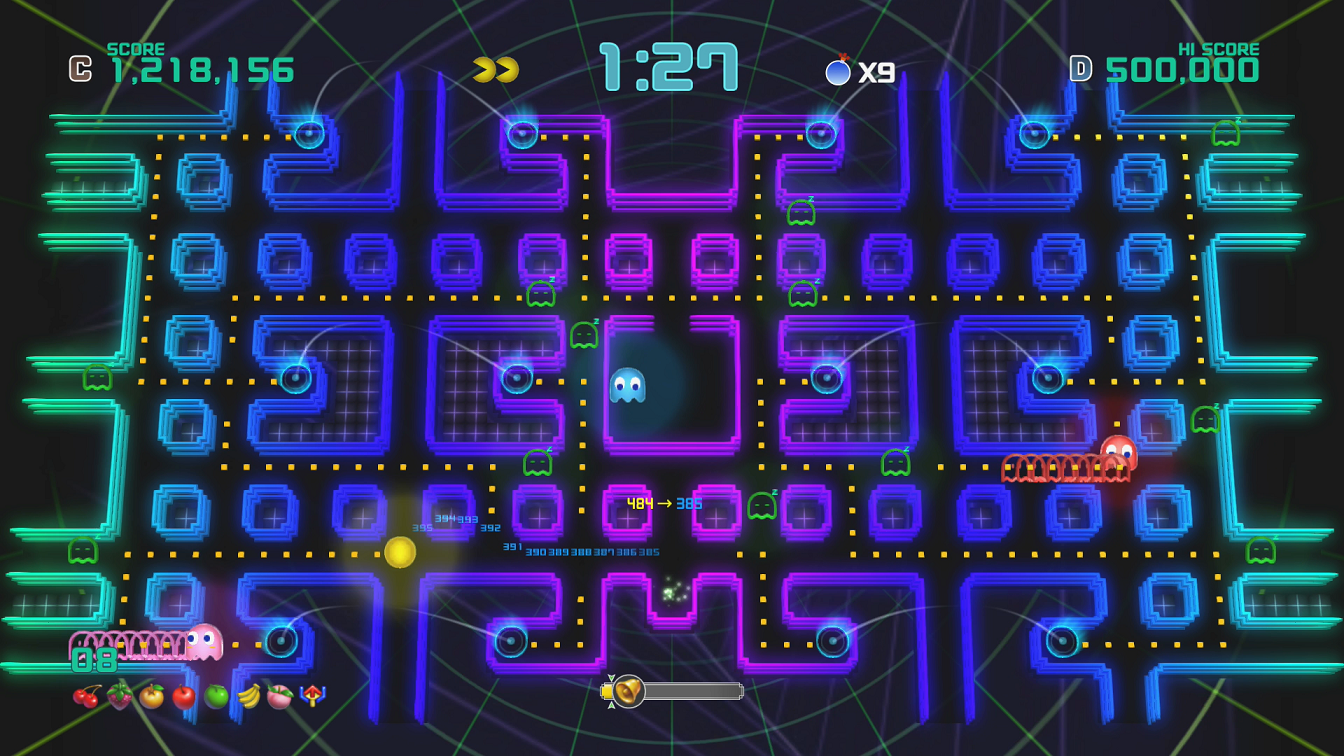 These two changes to the 'Pac-Man' recipe make the game much easier, as well as the braking mechanic first witnessed in 'Championship Edition' (quicker turning, essentially). Even for a noob like me, dying is nearly impossible on most levels. It's not the same 'Pac-Man', but nor are the changes entirely unwelcome. Other changes include jump pads that send Pac-Man from one end of the level to the other. The mazes are small and there are sometimes upwards of 10 two-way pads, so this makes for an extremely fast-paced and frantic game. Escaping from ghosts has never been easier. Bomb jumps make it easier yet, as whenever I'm even remotely threatened I can teleport away from danger.

Ghost trains from 'DX' have been carried over and expanded significantly. They don't contain supplementary pellets anymore, but eating the lead ghost automagically destroys every ghost in the train in a dramatic flourish. Catching that ghost constitutes one of the most difficult parts of 'CE 2', because it's fast and only the lead ghost is susceptible. Its pathway along the maze is telegraphed, however - they wouldn't want to make it too hard.

In most levels, all I have to do is clear as many screens as possible before the timer runs out and accumulate massive scores in true arcade fashion. Eventually Adventure mode opens up, which isn't that much different from previous levels except for a modestly harder enemy configuration and the addition of boss fights, where a huge ghost appears onscreen. Touching the ghost immediately angers all of the normal ghosts. With the exception of the moving fruit/pellets that have to be chased down, Adventure Mode feels more like traditional 'Pac-Man' with an accompanying level of difficulty. The score in this mode is heavily dependent on remaining lives. 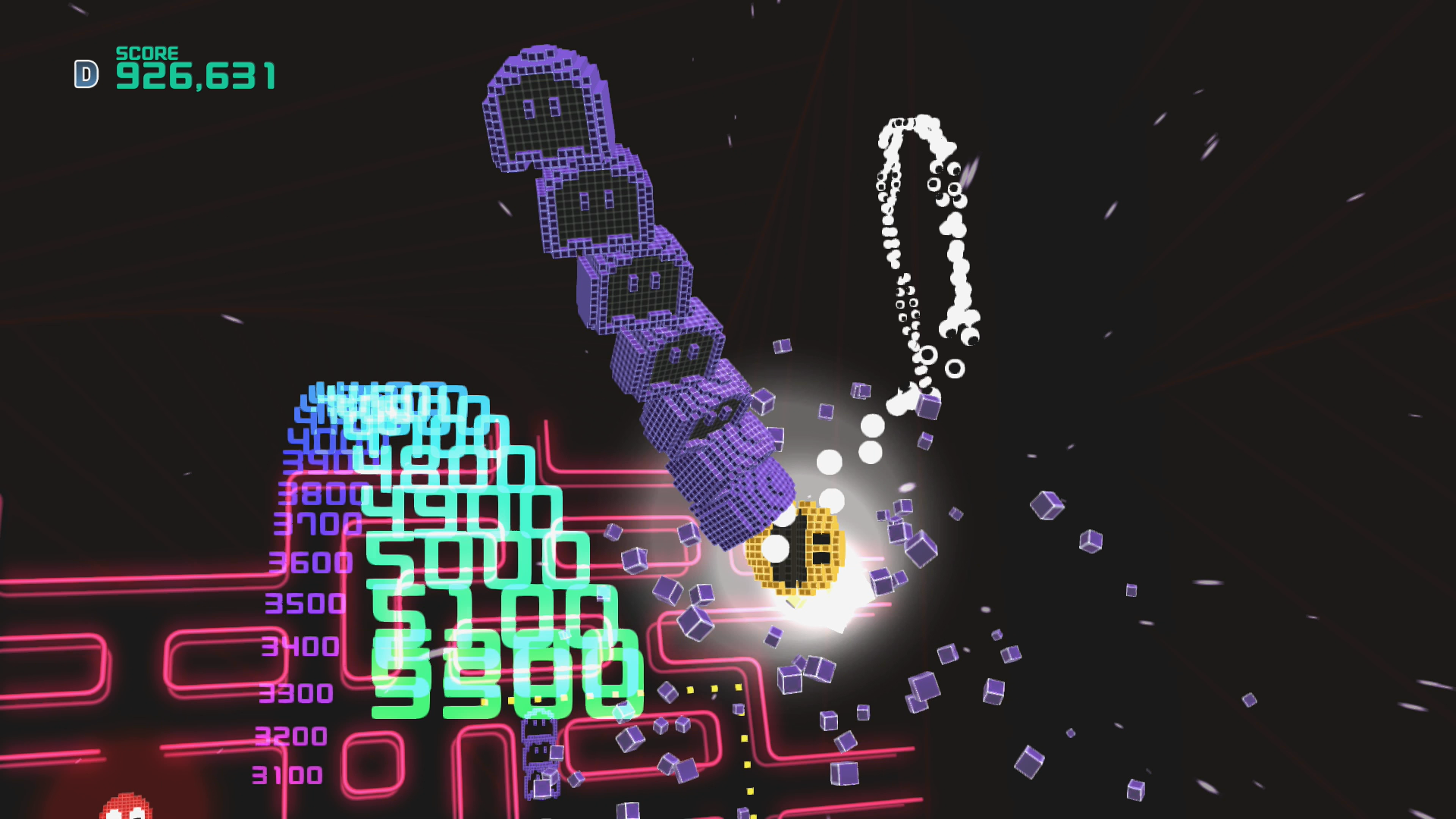 After digesting all of the changes and experiencing the very different cadence of 'Championship Edition 2' for a few hours, it started to become second nature. It's not the same 'Pac-Man', in fact it's quite different even from the previous releases in the series, but it still has that same retro nostalgia and gameplay that is fun and addictive when consumed in relatively small doses. This isn't the kind of game where the content keeps rolling out for hours on end, like an 'Overwatch' or 'Witcher'. It's the kind of thing that can be picked up and enjoyed here and there to beat a new level or a high score until it inevitably wears itself out until the next time, but 'CE 2' is fun enough that there can be a next time for quite awhile. 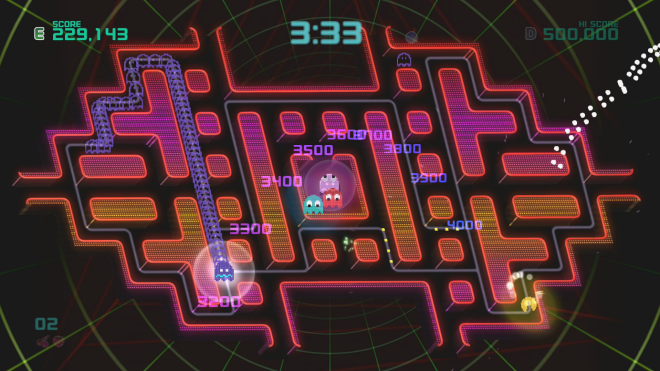 'Pac-Man' has a sleeker presentation than ever, with more rounded edges and a high degree of translucence. The effects are top-notch in their effervescent, bubbly simplicity. Different backgrounds, models, and camera angles can be selected for each playthrough, a mostly cosmetic change but one that could help some players with visibility or tracking issues (the sleepy ghosts in particular can be hard to distinguish). The framerate holds up even during the most insane of levels. 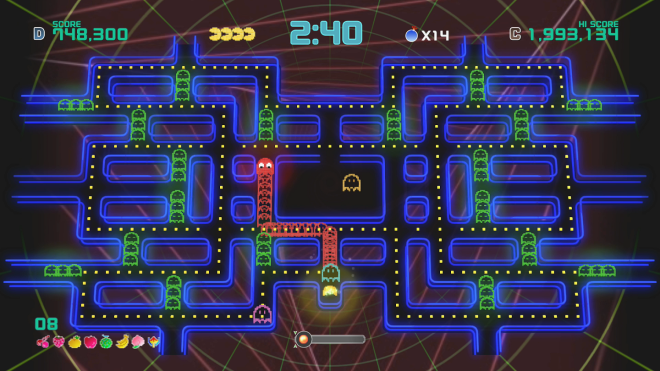 Bandai Namco kept the audio effects more to the arcade script than the other aspects of the game, with good reason. Most of the sounds still feel like they could be emanating from an eighties wooden cabinet. The music on the other hand has been overhauled to a more modern dance quality, remixed into 'DDR'-like tracks that, like the backgrounds, can be selected by the player. They're not excellent but the fast rhythm adds some ambiance to the mania on the grid.

There are quite a few levels with varying amounts of ghost and train arrangements, not to mention Adventure Mode which is more challenging. Still, most levels are more or less the same with just a few permutations, which limits the content. The draw of any 'Pac-Man' title is going for high scores, in this case an S rating that can be elusive. 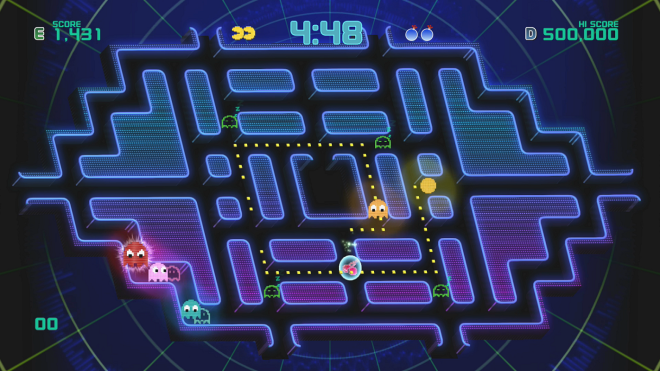 This is not your father's 'Pac-Man'. 'Pac-Man: Championship Edition 2' is faster and busier, and the purity of the original has been sacrificed for variety and a more forgiving difficulty level. That being said, it's still a great score attack game, one that I will be enjoying whenever I'm in need of an hour or so of sparkly, candied arcade goodness.