'Dear Esther' was originally released as a 'Half-Life 2' mod in 2008. Its usage of an experimental narrative garnered enough attention from the mod community to convince developer The Chinese Room to start work on a fleshed-out standalone version. The commercial release of 'Dear Esther' was then released in 2012. Four years later, the developer has rebuilt the game in Unity in order to release 'Dear Esther: Landmark Edition' on PC and consoles.

When 'Dear Esther' was commercially released in 2012, it was the center of a lot of "is this really a game?" debates. Sure, that seems really silly now, but it shows how foreign the concept of a game where the player just explored an island by walking around was just a few short years ago. No puzzles, no combat, just exploration. It was a simple experience, but also a very divisive one.

The gaming landscape has changed a lot in the past four years, and games like 'Gone Home' and 'Firewatch' have shown that first-person narratives have a place in gaming. So, it's interesting to look back at 'Dear Esther,' since it's essentially the catalyst point of an entire subset of indie games. One thing that stands out is that The Chinese Room's game really just has one mechanic: walking. 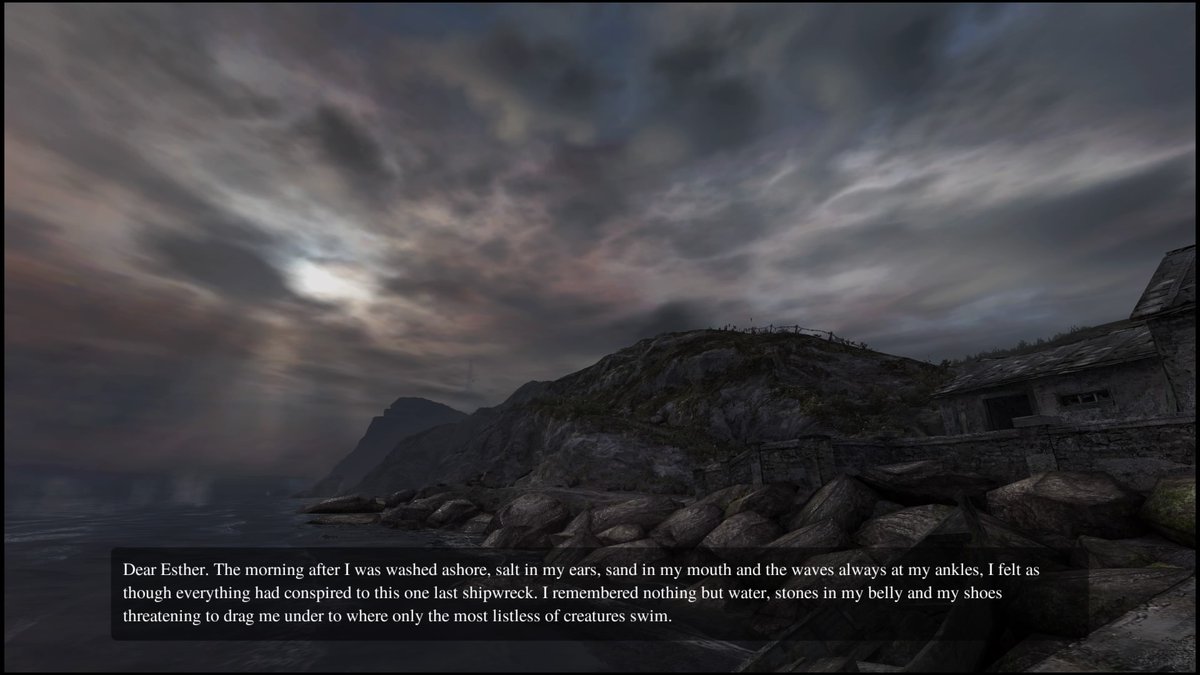 It lacks the rooms full of objects, and light puzzle-solving elements that have become standard in this type of game, but I don't feel like it suffers from it. Instead, 'Dear Esther' feels like a much more curated, yet distinctly individual, experience since there is really only one thing to do at any point. I always knew that I had to keep walking in order to advance the story, and that sort of simplicity actually felt refreshing in an era where I often have to deal with different gameplay systems intertwining.

Just like in real life, walking around a virtual landscape can get boring. Thankfully, 'Dear Esther' takes place on a gorgeous, mysterious island that I wanted to explore every inch of. It really felt as if I was uncovering two mysteries at once, as I stumbled upon caverns and heard the nameless narrator remark upon events that occurred in the past and present. This helped the simple act of walking stay interesting for the entire game, even if it was only for 90 minutes or so. 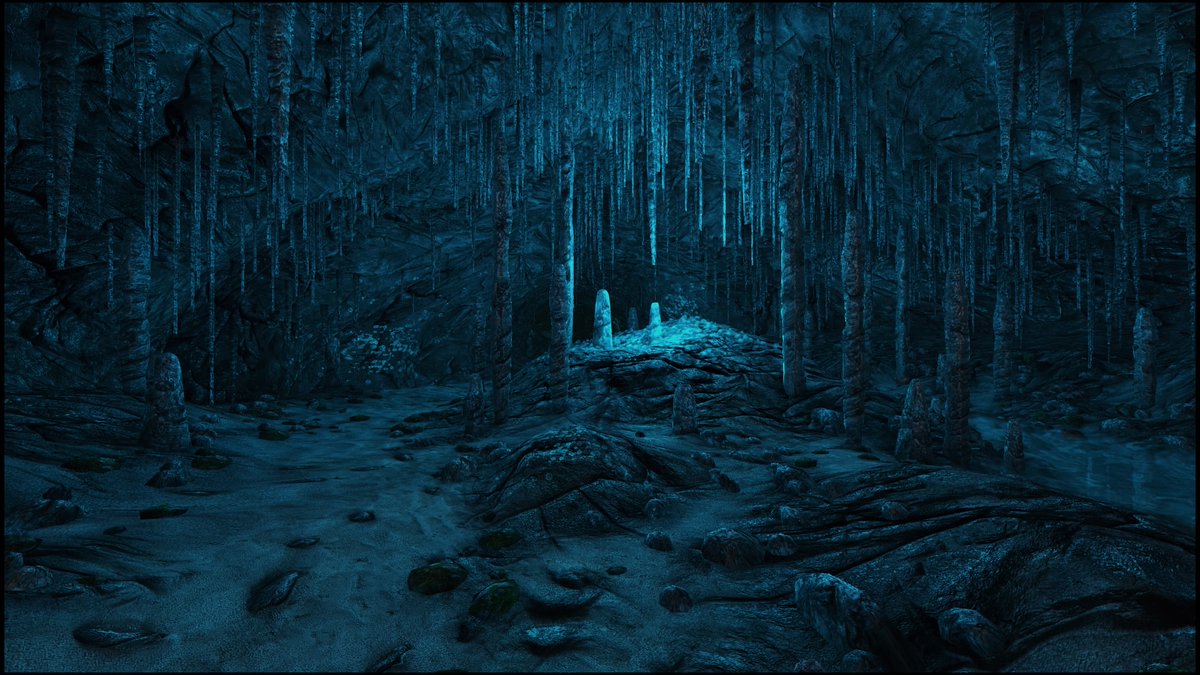 The story is kept intentionally vague at first, and allows the player to put clues together. This comes in the form of voice-over (large or small captions are also available) from what seems to be an unreliable narrator. His quips sometimes contradict each other, and his abnormal delivery only furthers the intrigue. The only thing that is really clear from the very beginning is that the island where 'Dear Esther' takes place holds some dark secrets.

What is more interesting than the narrative, is how it's delivered. The game's story is semi-randomized for each playthrough. This means that each scripted voice-over sequence can unfold in several different ways, and that means that the story I was told will likely differ from the one that other players will experience. For example, in my playthrough the narrator described a hermit who arrived on the secluded island after sailing there on a "boat without a bottom," yet it's possible for another player to never hear about this piece of lore. I can't get into more different examples without ruining some of the story, but enough can get left out to totally change how one may interpret the events of 'Dear Esther.' 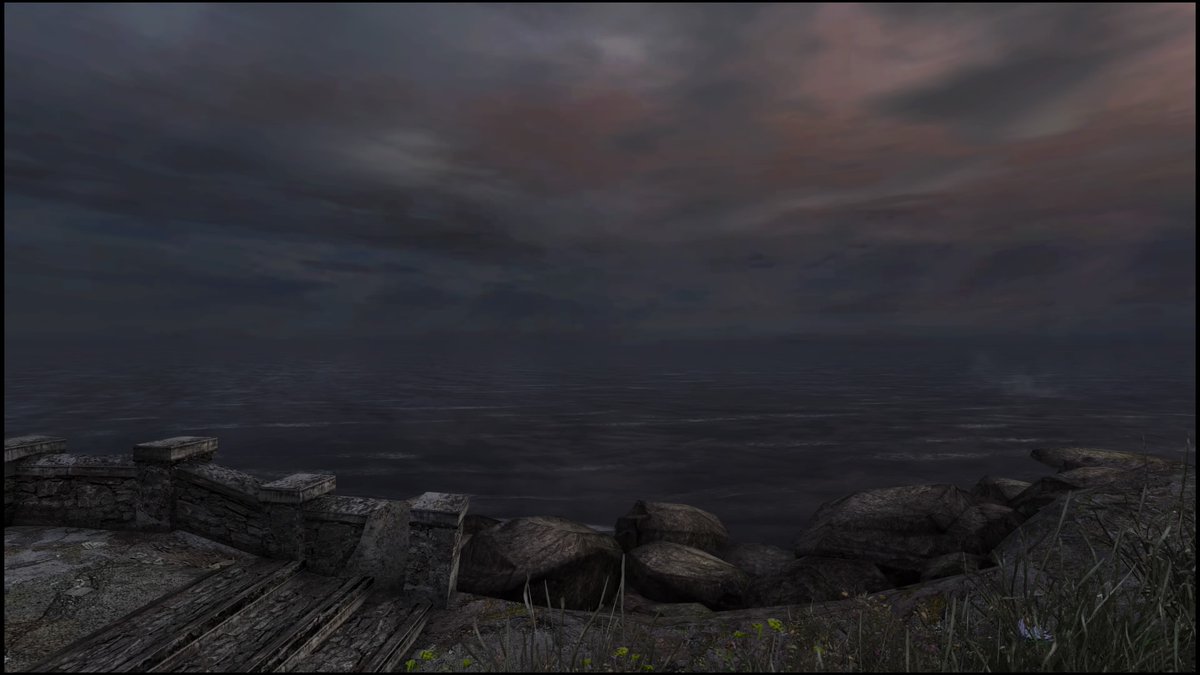 While the script changing is most noticeable, the game also randomizes different visual elements as well. This is only fitting, as a lot of the storytelling is done by physically looking at the island itself. Washed up debris is all over the place, and there are often elements that shouldn't naturally be there. This adds an extra sense of mystery to the island, as I often debated whether or not I was seeing an accurate portrayal of the events that were unfolding. This continued up until the ending, and I'm still filled with many questions regarding what exactly happened.

Sometimes being left with more questions than answers can be frustrating and unsatisfying, but that wasn't how I felt after playing 'Dear Esther.' Instead, I wanted to discuss my playthrough with other players, and I've spent the past couple days talking to others who have played the game and seeing how our experiences differed. It's a really unique situation, and it shows just how unique storytelling in games can be. Every person who watches a film will see the same scenes, but video games allow for shockingly different paths to occur. That's awesome, and I really hope more games experiment with this type of storytelling in the future. 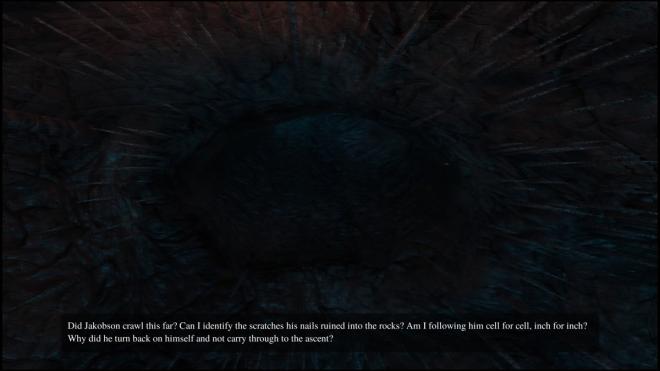 'Dear Esther' drew unanimous praise for its visual design in 2012, as it looked shockingly good for a game running on Valve's Source engine. The 'Landmark Edition' features the same locales completely rebuilt in Unity, and it looks even better than before. Despite the better looking textures, it's not quite as impressive visually as it was four years ago. Games have improved a lot from a graphical standpoint, and even The Chinese Room's most recent game 'Everybody's Gone to the Rapture' looks much nicer. That said, the island has been updated with an extra layer of detail, and it has been brought to life with added environmental objects that weren't in previous versions of the game. 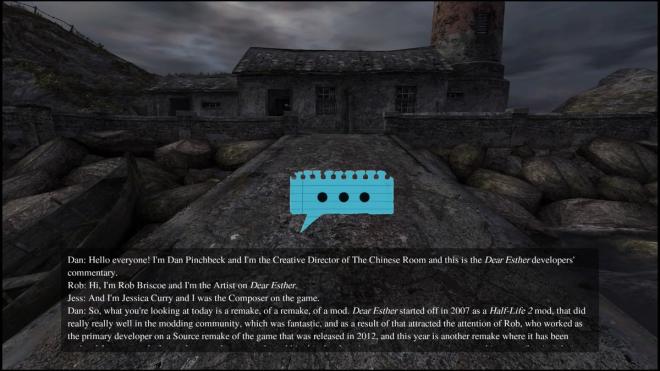 A beautiful orchestral soundtrack composed by Jessica Curry accompanies the player while they walk through the world of 'Dear Esther.' The music is sparse, but meaningful, as ambient noise plays during most of the game. This allows for the music to be more powerful when it does occur, and it often only plays during major moments (such as discovering a house for the first time). It really speaks to how less can be more, as each individual piece of music is memorable due to it happening so rarely.

The game's narrative is also carried by the voice acting of Nigel Carrington. The British actor has a powerful, eccentric delivery of lines that keeps the player's attention throughout. This is important as Carrington's voice is the only spoken dialogue heard throughout the entire game, so if the performance wasn't good then the story wouldn't be nearly as interesting or as captivating as it ends up being.

Due to the nature of 'Dear Esther's random narrative elements, there are reasons for players to replay the game after completion. I actually considered doing this since there isn't a huge time commitment, but I eventually came to the conclusion that I felt satisfied with my story. I'd rather find out about differing story details by discussing 'Dear Esther' with other players than to tarnish my original playthrough as it left me more than satisfied.

A second playthrough (although one without the regular narrative) is also required if a player wants to listen to the developer commentary. Due to the game's chapter select, it's easy enough to revisit an area in order to indulge in some sight seeing, or explore some more. 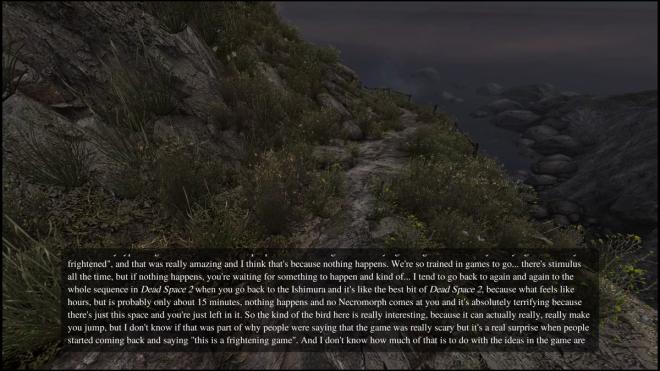 The big selling point of 'Dear Esther: Landmark Edition' is getting to hear the thoughts of artist Robert Briscoe, writer Dan Pinchbeck, and composer Jessica Curry. As a big fan of getting to know the reasoning behind a game's design, I was really impressed by the in-depth commentary track that occurred as I walked around the island and triggered audio icons. The trio talks about the game's interesting origins ('Doom' and other first-person shooters were big influences on the game), their thoughts on the term "walking simulator," and they touched on every topic that I wanted to hear them talk about.

My only disappointment is that it's easy to miss commentary points if you don't explore every inch of a level (and the only reason I know this is because a trophy didn't pop). It would've been a nice touch to at least tell the player how many spots they had found in each chapter. Instead, I'm left confused as to what I missed and will have to sit through a lot of the same discussions to find it. The mysterious narrative worked well for the actual game, but not so much for the behind-the-scenes extras.

It's worth noting that all of the commentary is also captioned, so those with hearing impairment can enjoy it as well. 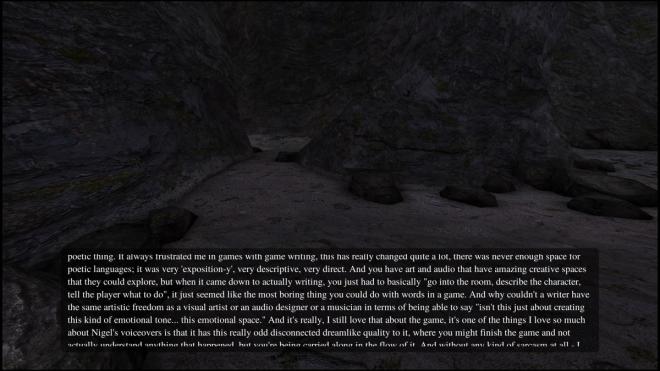 'Dear Esther' helped spark a trend of narrative-focused indie games, and it's great to see it celebrated in such a nice package. The 'Landmark Edition' is the best way to experience The Chinese Room's gorgeous adventure, and the developer commentary is a fantastic addition. It's well worth the price of admission, whether one has played the original or are just experiencing it for the very first time.