The Game Itself
3 Stars
The Video: Sizing Up the Picture
2 Stars
The Audio: Rating the Sound
3 Stars
Replay Factor
2 Stars
Bottom Line
For Fans Only

Following the success of the acclaimed 'Trillion: God of Destruction', Idea Factory takes another step into that game's hellish universe with 'MeiQ: Labyrinth of Death'. A unique fusion of dungeon crawler and mecha, the game casts players as a group of mages with power over fully customizable robots that act as their guardians as they attempt to restart the world's rotation and prevent its destruction.

I was a huge fan of 'Trillion: God of Destruction', an RPG/simulation hybrid that did a terrific job with its mechanics, characters, and setting. Despite some minor technical hiccups, it was an ambitious, exciting game that represented a big step forward for Idea Factory. 'MeiQ: Labyrinth of Death' is the second game in the franchise that 'Trillion' started, and while there are some minor thematic links, there's little else that connects the titles. I'd have no issue with the lack of connection, but billing this as a successor to that title left me with an expectation of quality that 'MeiQ' simply can't meet. 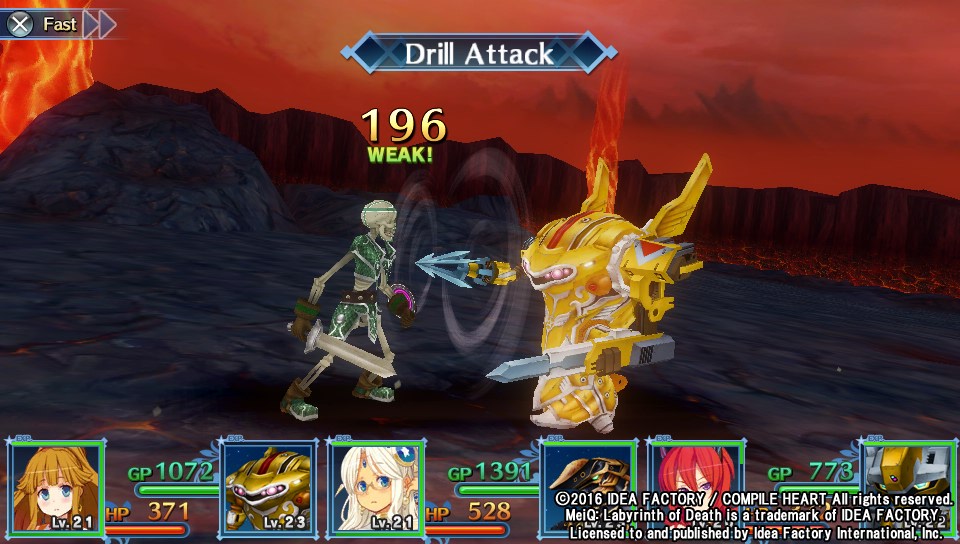 'MeiQ' has a really interesting setting, conceptually. Its world blends fairly standard fantasy with mecha designs and sensibilities to the point that the world itself is a machine with a sputtering engine that's simply stopped functioning by the time the game starts. With the world's rotation grinding to a halt, winds begin to vanish and the planet is stuck in an endless night. Five Machina Mages with the power to control huge robots are called in to delve into four different towers and fight the deities that live within in the hopes of finding the planet key and kickstarting the engine once more.

It's a basic setup that mostly feels like window dressing to explain why the characters have robot guardians, but it had me far more invested in the game's story from the get-go than it would have were it a standard fantasy plot through and through. The characters, while mostly archetypal, are all surprisingly likeable, and give the game a breezy charm that I was very fond of.

Sadly, that's about the most positive part of the game. 'MeiQ' isn't bad, but it feels like the most unambitious dungeon crawler I've played in quite some time. This is Idea Factory's first foray into the genre, and much of the game speaks to that lack of experience. Dungeons are huge, but have next to nothing to find in them. The second dungeon in the game is particularly frustrating, essentially just being a huge, open square with some rocks littered around to serve as little more than an annoyance. Other dungeons fare better, but typically boil down to winding corridors that have far too little to see and do within them. The game tries to throw in some light variety, but it never gets more interesting than ice puzzles, where the party will keep moving in a single direction until they hit an obstacle. It's a shame, because the team here knows to make each dungeon look different and follow its own motif, but they rarely feel different to explore. 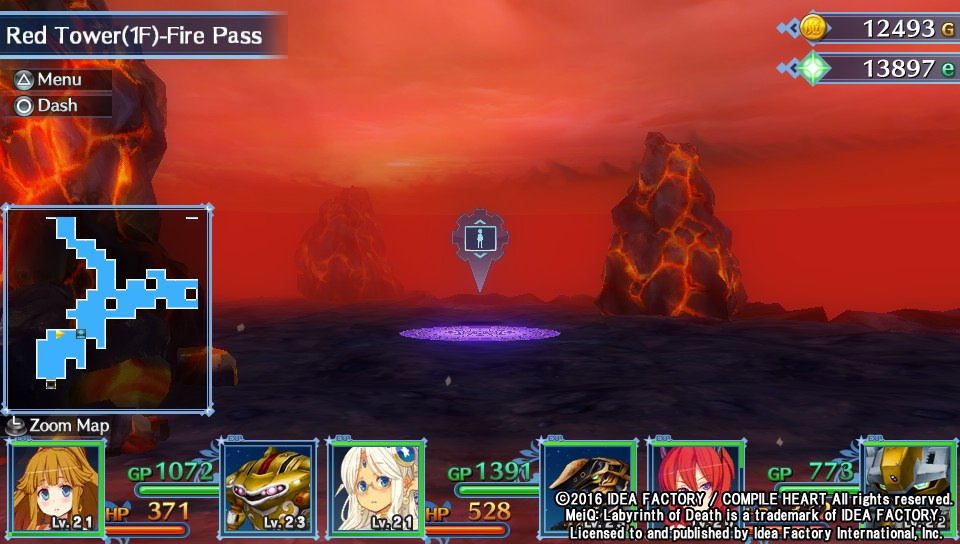 Combat is a brighter spot, with very traditional turn-based battles for the most part, the game stands out thanks to a rather great customization mechanic. Every robot in the game can be dramatically changed up, any two weapons can be equipped, unique bodies can be used, and gems can be slotted into the robot to imbue it with various effects. The weapon and gems are particularly cool, equipping two compatible weapons can unlock new combination attacks that use both at the same time, while gems can imbue the robot with special effects, such as being able to attack four times in a single turn. As the robots level up, more gems can be slotted in, allowing for even more effects to be grouped together. It's a fairly simple system, but it's a lot of fun, and stops the combat from feeling monotonous. 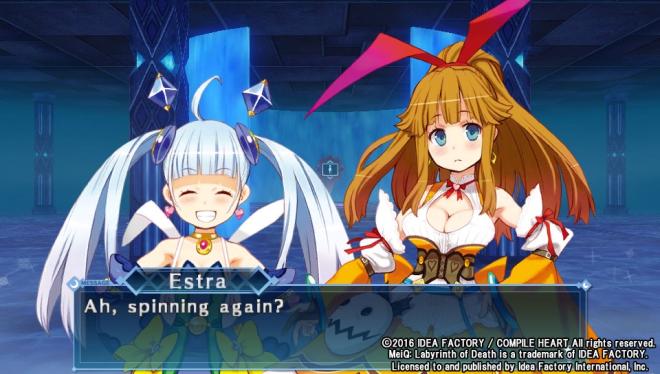 Bland and dull, each dungeon has a distinct motif, but none of them are interesting to actually see, simply falling into basic templates like forests or ice levels. Character models don't fare any better, with extremely basic enemy and robot designs that feel barely animated. The character designs, while a tad more risqué than I tend to like, are pleasant enough, but that's about as positive as it gets, visually. 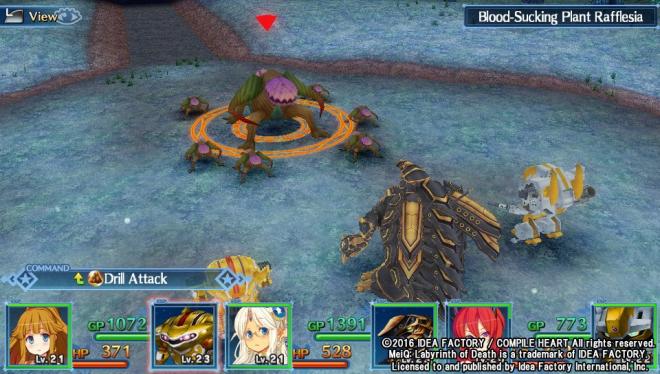 Tenpei Sato, composer for the 'Disgaea' franchise, is one of my favorite composers of all time, and the music he contributes here is at turns beautiful, exciting, and haunting when it needs to be. Sadly, however, he isn't the only composer involved, and a great deal of the music from the other composers ranges from adequate to terrible. It's a wildly uneven soundtrack, and the game has the awful habit of restarting dungeon music every time the player exits a battle, but what's good here is great. Additionally, the game has full English and Japanese dubs, with solid casting all around in both languages.

There's little on offer here outside of the main storyline, and by the time I'd completed the game, there was little incentive to really try again outside of trying things on a harder difficulty. There's no real reason to dive back in once the ending has been reached for the first time. 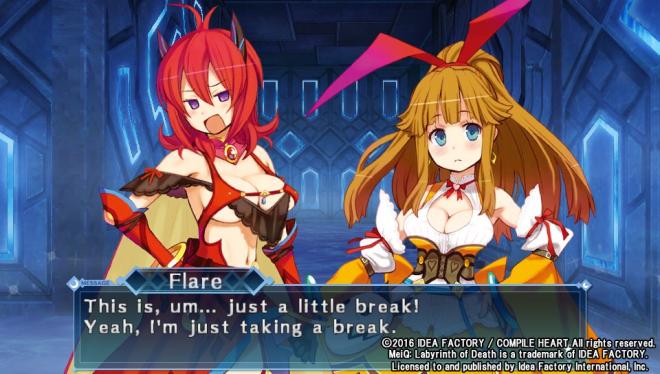 Far from being a bad game, 'MeiQ: Labyrinth of Death' doesn't really try to be much more than simply competent. Its systems and ideas are all strong, but they're tackled fairly gracelessly and just end up feeling rote after a while. I didn't have a bad time with the game, but it's hard to not just recommend playing something like 'Demon Gaze' or even Idea Factory's own 'Trillion' instead for those looking for a great Dungeon Crawler or JRPG on Vita.