The Game Itself
4 Stars
The Video: Sizing Up the Picture
4.5 Stars
The Audio: Rating the Sound
4.5 Stars
Replay Factor
3.5 Stars
Bottom Line
Recommended

It's impossible to talk about 'Azure Striker Gunvolt' without talking about what inspired it, so I'll get that out of the way. Inti Creates have developed what is essentially a 'Mega Man' game in everything but name. Players run and gun through themed levels that are capped off with a boss fight, and gain access to new weapons after completing stages. It's all presented in a very familiar trapping, complete with portraits of the boss characters when selecting a stage.

Unlike another game that Inti Creates had their hands in ('Mighty No. 9'), 'Gunvolt' isn't attempting to recreate the past. Instead, it tries to forge a new path by building upon a solid formula that practically every gamer knows. The key difference is how combat works, and it's the area where the series shines the most. 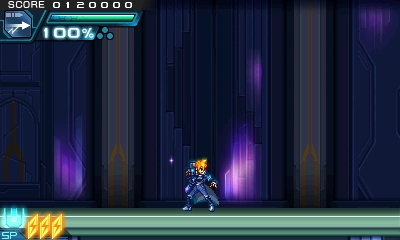 Upon starting up the game, I was surprised to find that my gun wasn't dealing much damage to enemies. Instead the titular character's gun acts as a lock-on system, which then allowed me to trigger Gunvolt's electric field by pressing the right bumper. This changes the pace of combat drastically, as actually damaging enemies isn't difficult after tagging them.

Since the attacking is pretty much put on auto-pilot (I just had to hold down the right bumper and occasionally let go in order to refill my ammo), the focus is instead on dodging the attacks of enemies. This is such a refreshing format, and it's exactly what separates 'Azure Striker Gunvolt' from games like 'Mega Man' that put an emphasis on shooting. It's highly satisfying dashing away from projectiles, jumping into the air in order to go above bullets, and thinking more about defense rather than offense.

This gameplay is the crux of both games, and plays into the sequel's main addition which is a second playable character named Copen. He plays quite a bit differently than Gunvolt, as his normal attack actually does do a lot of damage, but he can still tag enemies in order to deal the maximum amount. This is done by dashing into foes (done by pressing the left bumper), and it's a refreshing way to play. 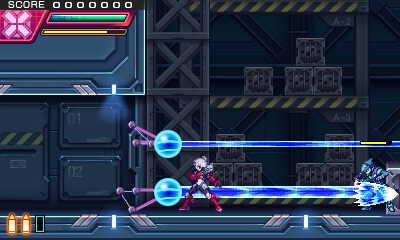 'Azure Striker Gunvolt 2' is broken apart into two separate stories (players get to decide which hero they want to play as), but a lot of the content is shared between the two. Only a few stages are unique to each character (which doesn't allow for a lot of stages to actually be built around their differences), but each story is only a few hours long so it's not like players have to slog through the same exact content twice.

The level design is the one weak point, and I was pretty shocked to see that it didn't improve in the sequel. Each level of the game focuses on an individual gimmick such as manipulating magnetic platforms, dealing with icy platforms, or having the lights turn off and on. The problem is that these stage-specific mechanics are rarely fun. I didn't mind the more puzzle-like ones, but several of them just got in the way of the core gameplay being as fun as it usually was.

One particularly frustrating stage found in 'Azure Striker Gunvolt 2' had me using Copen's dash ability to jump from one platform to another far away one in order to avoid bottomless pits. Doing this once or twice wasn't particularly difficult, but the game would sometimes ask me to do it 7-8 times without any checkpoints. What was annoying was the 10-second load time that each death was met with, and it was one of the weakest stages in the entire series. 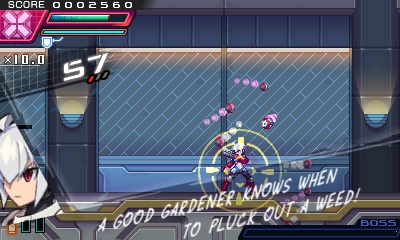 Regardless of not enjoying every stage, I always powered through since I knew a boss fight was waiting for me at the end. These are the highlights of the game, as each boss goes through several attack patterns, and I found it a lot of fun overcoming their challenge. The first game felt more challenging as bosses would sometimes have one super powerful attack that could kill Gunvolt in one blow, but thankfully the sequel feels more fair and the foes' last resort isn't an instant death if hit.

If there is one area where the sequel ends up regressing from the first game, it's how it presents the game's rather lackluster and generic story. Dialogue often pops-up during gameplay (even boss fights), and character portraits often obscured my view. Considering the game is all about defense and dodging your opponent's attacks, it put me at a sizable disadvantage when the boss character was hiding under a portrait. This can be turned off, but I had to deal with this inconvenience since I wanted to see the story through.

In fact, having played the two 'Azure Striker Gunvolt' games back-to-back, it made me question several of the design choices. The sequel's decision to double-down on gimmicky levels, and to add a more attack-style protagonist seem to go against everything that made the first game enjoyable. I wouldn't go as far to say that the sequel is a step backwards, but I'd much rather see the series go in the complete opposite direction and focus on its strengths. 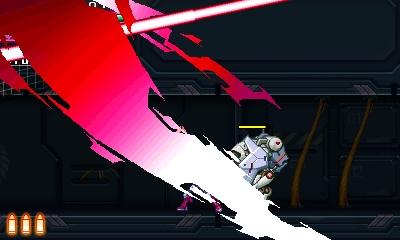 One of 'Gunvolt's strongest areas is its visual design. Stages are highly detailed with fantastic spritework, and if there's one plus side to the gimmick stages its that each level looks considerably different from one another. Graphically, the two games are pretty much identical (even sharing a lot of UI elements), but this isn't a bad thing as it feels like a seamless transition going from one game to the next. 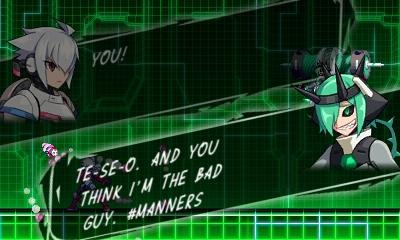 Both 'Azure Striker Gunvolt' titles feature a fantastic soundtrack composed by Ippo Yamada, who has done several 'Mega Man' soundtracks including '9' and '10.' This is some of his best work yet, as every track is energetic, and matched the game's intensity level. The OST is complemented by great sound effects, as Gunvolt's electric field shocks enemies. It all makes for a great experience, one I would recommend playing with headphones on.

I'm not normally one to replay games after I finish them, but there's plenty of content in the two 'Azure Striker Gunvolt' games. This is probably a good thing considering each game lasts about 6 hours or so. There are upgrades to unlock that further enhance Gunvolt's skills, challenges to complete (such as finishing a stage within a specific time limit or attaining a certain ranking), a speedrun mode to really test the player's skills. I felt fully satisfied after playing through each game's story, but there are reasons to go back if players aren't ready to stop playing after the credits roll. 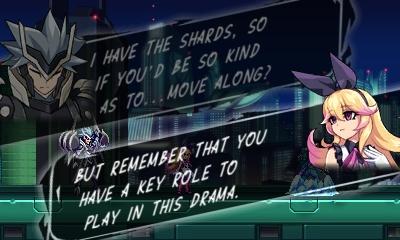