The Game Itself
3 Stars
The Video: Sizing Up the Picture
4.5 Stars
The Audio: Rating the Sound
3.5 Stars
Replay Factor
4 Stars
Bottom Line
Worth a Look

The first game from Barcelona-based studio Lince Works is a visually striking stealth title called 'Aragami.' Players take the titular role of a vengeful spirit of darkness who has been summoned to take out the evil army of Light. The PS4 and PC title is also playable cooperatively online, allowing two friends to team up.

My first impression of 'Aragami' was a negative one. Immediately upon starting the stealth title, I was greeted by a terrible frame rate that seemed to freeze before every cutscene. While these performance issues would get better upon leaving the starting area, they always managed to pop-up occasionally while playing.

Despite the less than stellar technical performance, 'Aragami' began to impress me once it started to explain its in-game mechanics. I was able to leap from one shadow area to the next, and was even able to cast my own shadows in order to have a freer range of movement. So many stealth games feel slow, so it's highly satisfying to be incredibly mobile.

Things start off pretty simple beyond the shadow shifting, as the titular character only has a sword that he can use to take out dangerous enemies (ones that will end his day with a single hit). While it all worked, I was pretty bored by the opening stage as it seemed like the game was just a pretty stealth title with nothing else to offer other than a staunch difficulty and the shadow teleportation. Thankfully, the game ramps up in complexity, as more mechanics are added as the grandiloquent story progresses. After the first three chapters I finally had more tools at my disposal, and I really started to enjoy 'Aragami.' 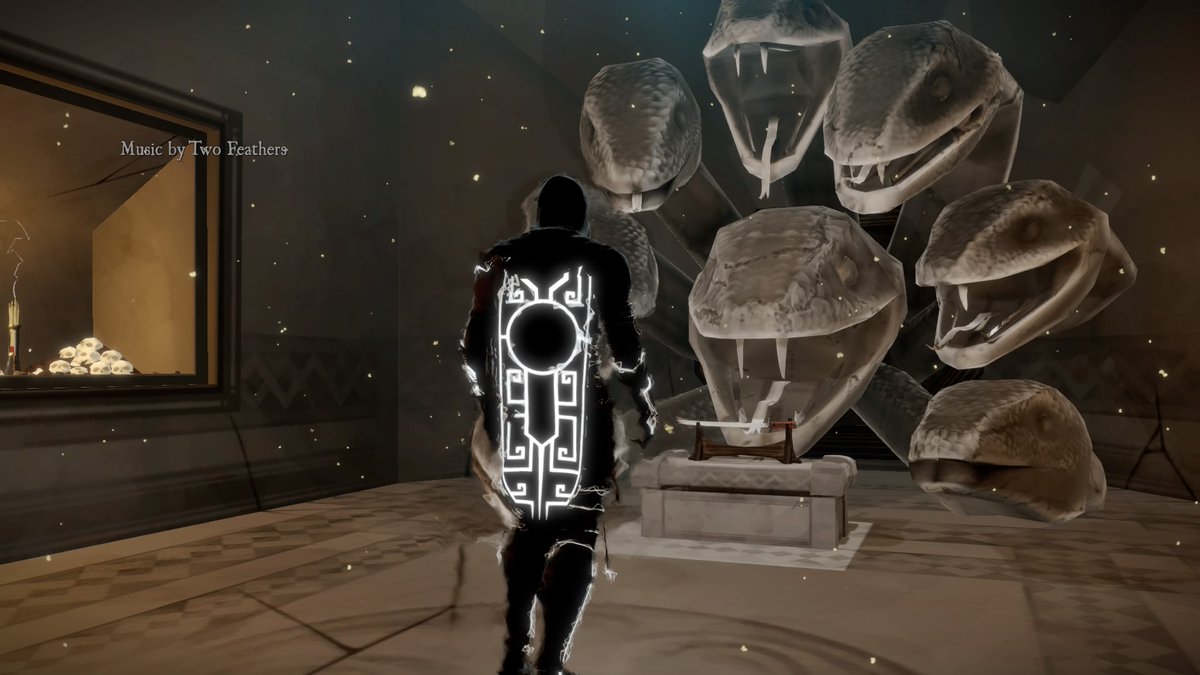 Eventually, I was able to throw kunai at far away enemies, mark foes as if I was playing 'Far Cry,' and even make bodies vanish by using some dark magic. I even gained access to a raven that would mark key locations, and in theory tell me where to go. This really opened up the gameplay, and getting to experiment with how to deal with the guards and archers that I faced off against made every encounter all the more interesting. This led to me creating extravagant plans of how I was going to tackle an area, attempting to pull them off, and then managing to barely succeed after undoubtedly getting spotted along the way.

It's these wonderful moments when every mechanic in the game clicks, and the action moves along like clockwork, where I felt like I was playing the next great stealth game. I eventually became confident enough in my abilities that I was leaving bodies out in the open to lure other guards, and then taking care of them before they could call for back-up. It's all a matter of risk-reward, and it can be absolutely thrilling.

Sadly, these moments never seem to last in 'Aragami.' Every fantastic stretch of gameplay eventually ended with me lost as to where to go (with the on-screen guide simply telling me to "move to the next area" as if that was helpful advice) or running into a scripting error where the AI would start rapidly turning around indefinitely. These small grievances build up, and losing 20 minutes of progress because of an in-game bug that broke the guards' patrol routes is heartbreaking. 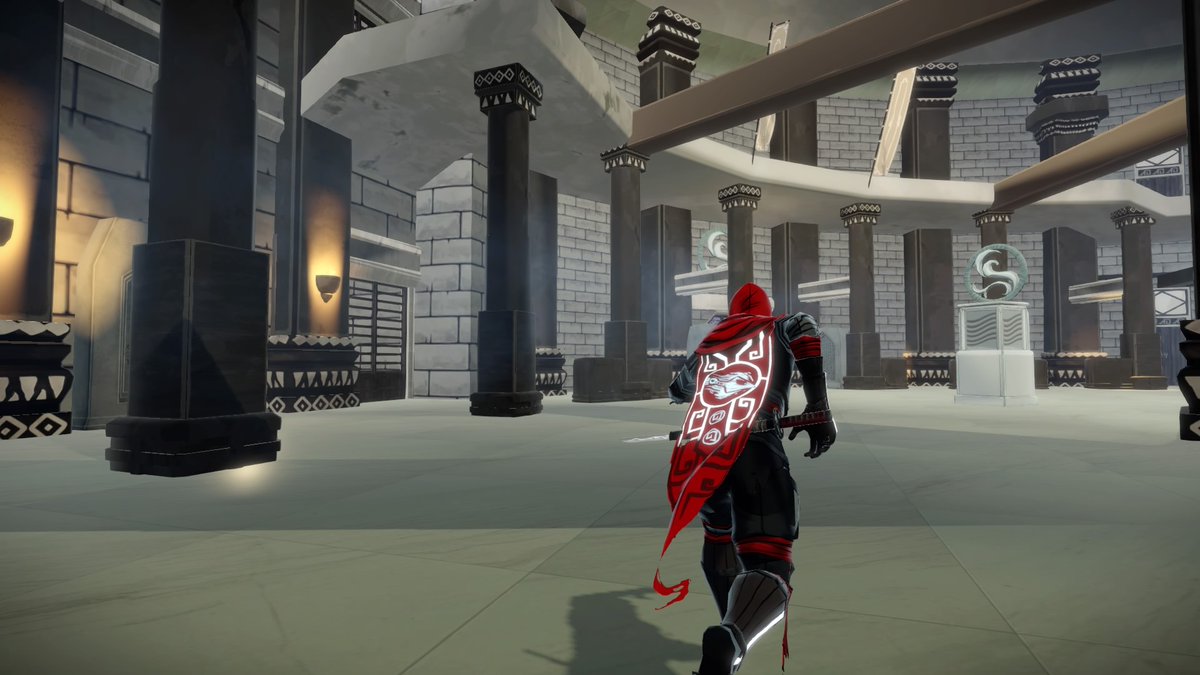 I ran into a few AI issues in the early chapters, but by the time I was mid-game and facing off against dozens of soldiers, I began to experience these bugs pretty often. Some were harmless enough, I had a foe walk in place that wouldn't spot me even if I was standing right in front of him, but they still took me completely out of the game. I was supposed to feel like an incredibly powerful shadow assassin facing off against these powerful warriors of light, and instead I was facing off against rejects from 'The Three Stooges.'

It seems like developer Lince Works is aware of these issues as they've issued two sizable patches since I've been playing the game, but it's going to take a lot of work to fix the borderline broken AI. I eventually found myself more-or-less breezing my way through levels (at least when I knew where to go) by exploiting patterns, and it never felt like a really accomplished something like when I would successfully complete a mission in 'Metal Gear Solid V.'

Enemy AI being generally brain-dead might actually be a blessing in disguise, as 'Aragami' is otherwise pretty punishing. Even the most basic of guards can cast  agiant beam of light from their sword that killed me in a single hit, and death is pretty punishing here. Some areas are pretty huge in the game, and it wasn't uncommon for me to lose 20 or 30 minutes worth of work due to dying. I wasn't usually upset by it, but when I died wandering around an area for the 50th time because I had no clue where to go it just feels unfair. 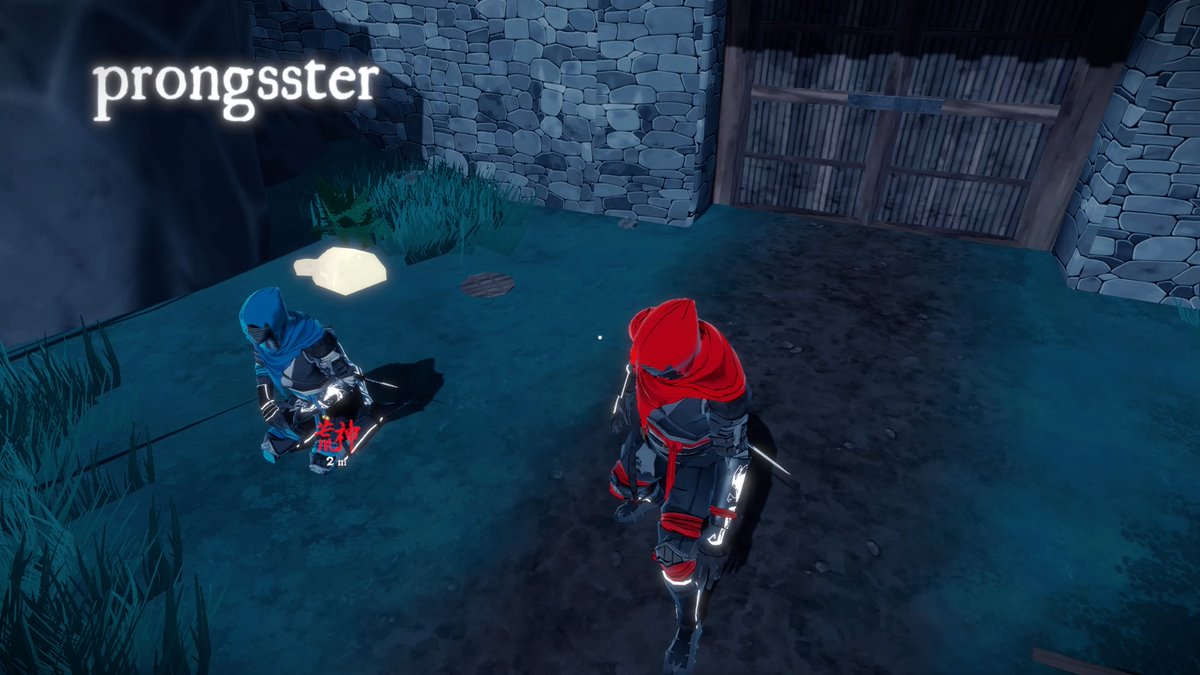 A lot of the issues are slightly lessened when playing cooperatively online, though, and that became my favorite way to play. Having two heads to figure out where to go when the raven is being unhelpful is nice, and the game becomes a lot more manageable from a difficulty perspective. The only disappointing aspect of cooperative play is that once my partner died, they had to stare at the screen until I hit a checkpoint or met the same fate as them. Considering how long areas can be, this isn't exactly an engaging way to handle the issue of death. Still, if you can play it with a friend then I recommend doing that from the very start. It's absolutely the best way to experience 'Aragami,' as nothing is really gained by going solo.

One issue that isn't made anymore fun by the presence of a friend is the game's strange platforming sections. I'm not sure why Lince Works thought that 'Aragami' needed more variety (the stealth sections can be downright amazing), but the developer has inserted some rather unpleasant sections that have players teleporting from one area to the next as if they were playing a 3D platformer. It's not a good one, though, as a section that had me climbing up a revolving tower was thoroughly miserable. Thankfully, these sections are rare and the game mostly sticks to what it's good at, but they still popped up enough to infuriate me.

In spite of its many flaws, I still enjoyed my overall time with 'Aragami.' It's frustrating that it felt like the game was trying to get me to hate it at times, but the core gameplay was too fun for me to ever give up on it. The magical moments where I would use all of my powers to take out an entire base unnoticed was thrilling, and I'd gladly put up with some terrible AI to experience it again. 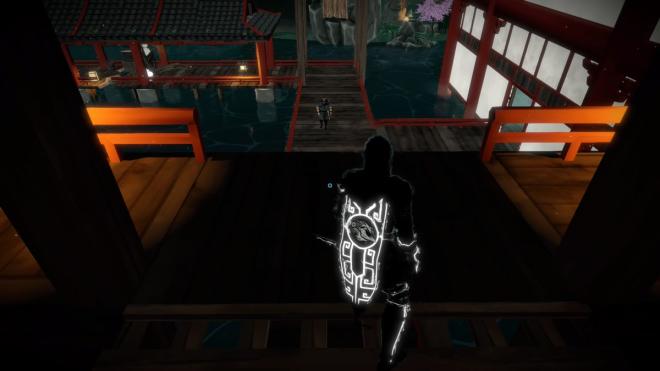 While 'Aragami' has its shortcomings, style is not one of them. Everything from the cutscenes to the in-game HUD (which is all seen on the player's cape) looks fantastic, and it's one of the most striking games I've played all year. Sadly, some technical shortcomings such as a poor frame rate ('Aragami' has been built on Unity) and some clunky animations keep it from being a visual tour de force. Still, Lince Works have managed to create a game that manages to impress the majority of the time. 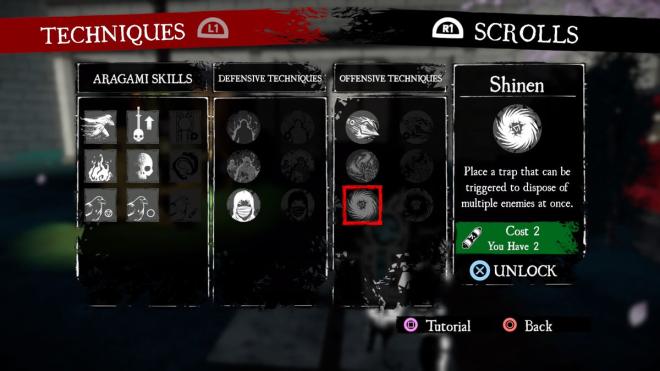 Featuring some good, yet ultimately forgettable, Japanese-inspired music, 'Aragami' has a soundtrack that complements the rest of the game. It's not as memorable as 'Okami's OST, but its classic music still manages to make players feel like they've traveled back in time. The gameplay is also strengthened by a great use of sound cues, that help players know when they've been spotted and where enemies may be. The sound may not be phenomenal on its own, but it really helps the overall package.

Hidden scrolls are hidden throughout each of 'Aragami's 13 levels, and they aren't just collectibles. These scrolls end up unlocking new abilities to use, and they really morph the entire gameplay experience. That gave me an incentive to replay levels I had completed, and look for the items that I missed. The trophies are also creatively earned, so anyone aiming for a platinum will have to replay levels multiple times (even having to change their play style from killing everyone to killing nobody). Throw in online cooperative play (although I do have to note that I, a North American player, wasn't able to match up with players from Europe for whatever reason), and there are plenty of reasons to come back to 'Aragami.' 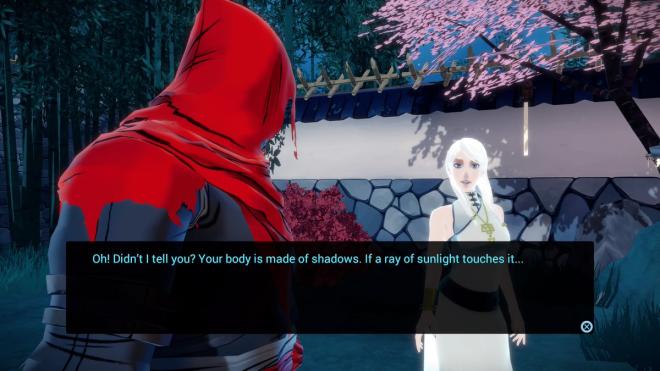 'Aragami' is an ambitious stealth game that occasionally brushes shoulders with greatness. A poor frame rate and sub-par enemy AI really hampers the experience, but stalking from the shadows remains fun throughout. Hopefully some patches will make this fulfill more of its potential, but until then players will have to settle for a heavily flawed, yet entertaining experience. It's especially worth playing if you have a friend to play with, as so few stealth games feature cooperative play, and it's simply more fun that way.