The 'Warhammer Fantasy Battle' tabletop gaming series began in 1983. It was popular enough to spin off several other franchises, including 'Blood Bowl' and most notably 'Warhammer 40,000', a blend of fantasy and science fiction. 'Warhammer 40K: Eternal Crusade' is developed by Canadian company Behaviour Interactive and published by Bandai Namco. The PC version is currently in full release, with PS4 and XB1 editions planned for later.

'Eternal Crusade' is an arena shooter where two teams of up to 16 players each fight one another to hold objectives. There are four races: Space Marines, Orks, Chaos Marines, and the elflike Eldar. The player prepares loadouts before matches with different weapons and gear, and the loadouts can be swapped out in between spawns. The gear can be grouped into broad classes to delineate classes on the battlefield: heavies, melee specialists, healers, etc. In every match I played, my only goal was to take and hold one of three different points on the map against the enemy team, king of the hill style. I earned more points when killing an opponent near an objective marker. It's the same basic premise as 'Planetside 2', but with a third-person perspective and fewer MMO elements.

Combat in 'Eternal Crusade' is rough. Bullets fly out wildly in a spray-and-pray formation, even in a more accurate weapon. Turning is slow, almost tankish. Melee attacks can easily clip through walls. Worst of all is the friendly fire. It has always been one of my most reviled gameplay "features', as punishing as it is to co-op gameplay, and here it makes teamwork nearly impossible. When attempting to help my battle-brother take down an enemy, I had just as much chance to knock him down as the bad guy. Should the downed brother feel salty afterwards, he could initiate a kick of me to be voted on by the other teammates. I understand that friendly fire is realistic, but realism should never get in the way of a good video game. Not that I'm saying 'Eternal Crusade' would be a good video game without friendly fire, but it wouldn't hurt. And this is just the accidental friendly fire deaths. Griefing is not unheard of, and it can be slow to kick a troll when other players are engaged in combat and can't be expected to vote immediately.

I hesitate to describe 'Eternal Crusade' as a shooter. The shooting itself is sloppy, and it's accompanied by a very powerful melee game. It's very easy to dash in with a knife and two-shot an opposing player who is struggling to hit you with even a few shots. This results in many players foregoing guns entirely and spamming cheap melee attacks. I can't blame them for it because they want to win and melee is the key to victory, and Behaviour is apparently perfectly fine with this arrangement. Even though they spent a lot of development time on guns, cover mechanics, animations, etc. New players are at a severe disadvantage because the matchmaking is so abysmal. They're either going to be up against experienced players with lots of expensive gear, or wealthier players with lots of expensive gear (received from microtransactions instead of play). Both are capable of mowing down noobs in short order.

This game is also not an MMO, contrary to anything you may have read or even the genre tags on its Steam page. If it is an MMO, it's only an MMO the way that 'World of Tanks' or 'Overwatch' is, in that all of the content is multiplayer only. There's no open world and no persistent maps. Each fight is instanced on large, unwieldy levels that are difficult to get around. Respawn times are relatively long and it can be a hike to get to the nearest objective from the spawn point.

As if all of that weren't enough to dissuade a new player, the tutorial is thin and inadequate. I hopped into my first fight with barely a nod from the game, ignorant of the mechanics and advancement framework. The shooting/stabbing controls are self-evident, but things like secondary equipment and skills could really use more explanation. 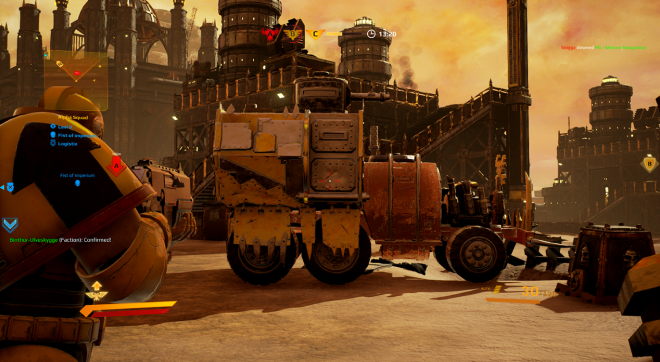 'Eternal Crusade' runs on Unreal 4 but the visuals are dated. Technical issues include clipping and strange hitboxes, as well as persistent lag. Textures and animations are lackluster. On the upside there is success in the 'Warhammer 40K' art design, which in general is an accurate depiction of the Space Marine supersoldiers and their distinctive armor. 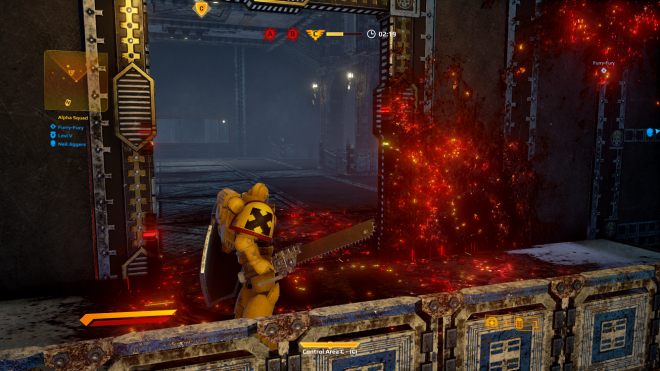 There is a decent audio suite, at least in the voice acting and sound effects. However, all of the audio has a muffled quality, like it's coming from far away. The game is relatively free of audio artifacts and bugs.

There is no campaign or single-player material, which would be fine if the PvP was up to snuff. As it stands it is difficult to get into or have fun with. 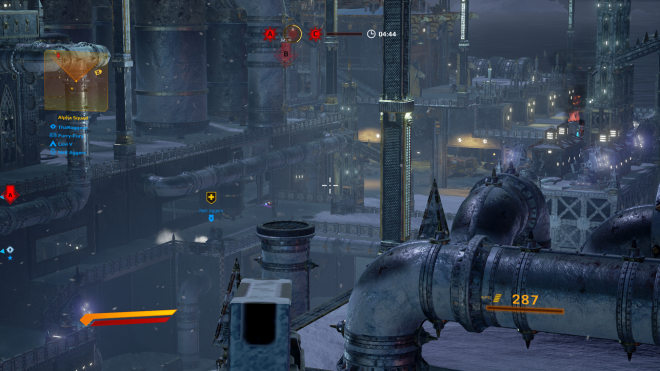 'Warhammer 40K' is a great franchise on paper but has struggled in video gaming, and 'Eternal Crusade' is on the lower end of the spectrum. It has the trappings of a freemium pvp game but asks for $50 just to get in the door. From the shoddy controls to the inscrutable mysteries of equipment, this is one shooter we cannot recommend, even for the most dire of 'Warhammer' fans.