The Game Itself
3.5 Stars
The Video: Sizing Up the Picture
4 Stars
The Audio: Rating the Sound
4 Stars
Replay Factor
3 Stars
Bottom Line
Worth a Look

One thing that might be interesting about the collection is that these experiences were, in some respects, the first public and press demonstrations of Project Morpheus, and then later, PS VR.

The only way to properly get into what's on offer with 'PlayStation VR Worlds' is to break it down into its five different experiences. But before I get into the meat of what's there, I can say that I'm very glad that this disc was included in the PlayStation VR Launch Bundle. I'm even more glad that all PlayStation VR owners have access to the 'PlayStation VR Demo Disc,' and certainly, these five experiences are, on the whole, less game-like and more VR expose-like than the greater PS VR launch library.

'PlayStation VR Worlds' has a fancy 3D menu, which beyond its attractiveness, does a nice job of explaining what to expect in each sub-title. Specifically, what is needed to control each experience (headset only, DS4, or PS Move) is made clear, which is a great bit of info to have prior to loading into

Like most of 'PlayStation VR Worlds,' playing 'The London Heist' was like revisiting a game that I had already played before. 'The London Heist' breaks down into a story mode and a shooting gallery, and I had played roughly half of the story mode before and even watch several other people do the same when previewing the PS VR. I mention this because it's helpful in illustrating some important things to know about 'The London Heist,' the story section is pretty short, and it's short on certain game elements. 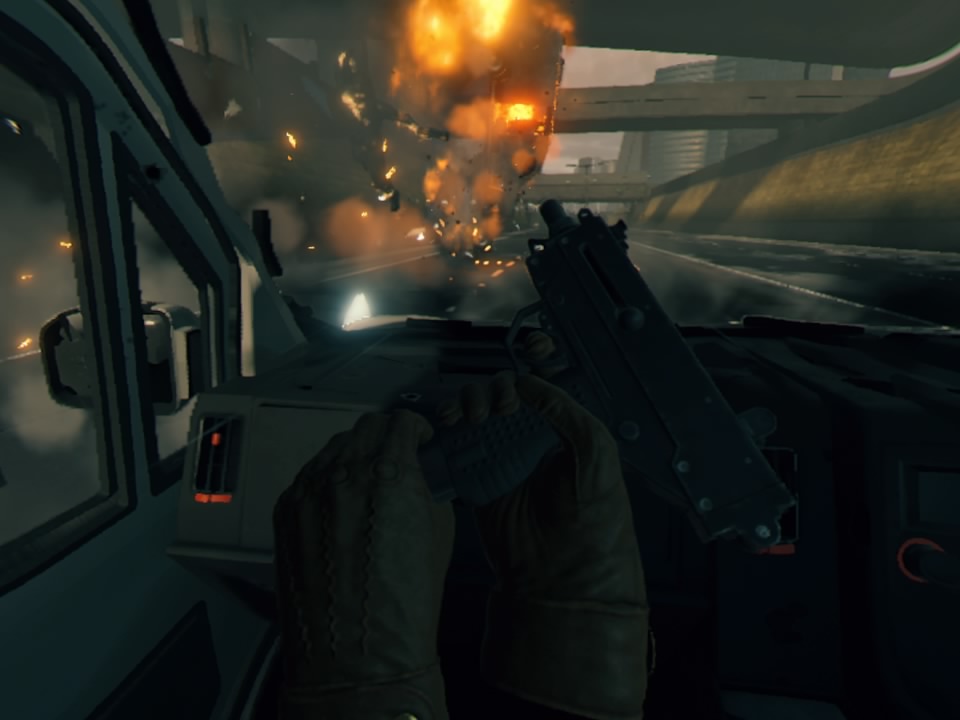 But what 'The London Heist' does have is style (in a Guy Ritchie kind of way) and it has gunplay. Using pistols and submachine guns along with a few interactive spaces is where the PS Move controllers come in. They aren't required, but they were key for me. There are a handful of scenes in the story, and I both enjoyed the pulp little interactive story and was also disappointed that the gameplay wasn't taken a bit further. The story can be played with health (and thereby death) or with invincibility (full-on demo mode really). I wanted the pressure of health, and I even died at one point. That was during one of the shooting sections, which are the most fun. The more passive story bits are pleasant enough (and even a little interactive), but I found myself making lewd hand gestures and throwing things while I was supposed to be having a one-sided conversation.

It's a fun, demo-like experience, and the extra shooting gallery mode is both diverting and challenging.

The first time I played 'VR Luge' using Project Morpheus on a Sony provided beanbag, I made some concessions to how terrible I found the game/experience part. Playing the now slightly larger version on finished hardware, and I dislike it to a greater extent than I expected. 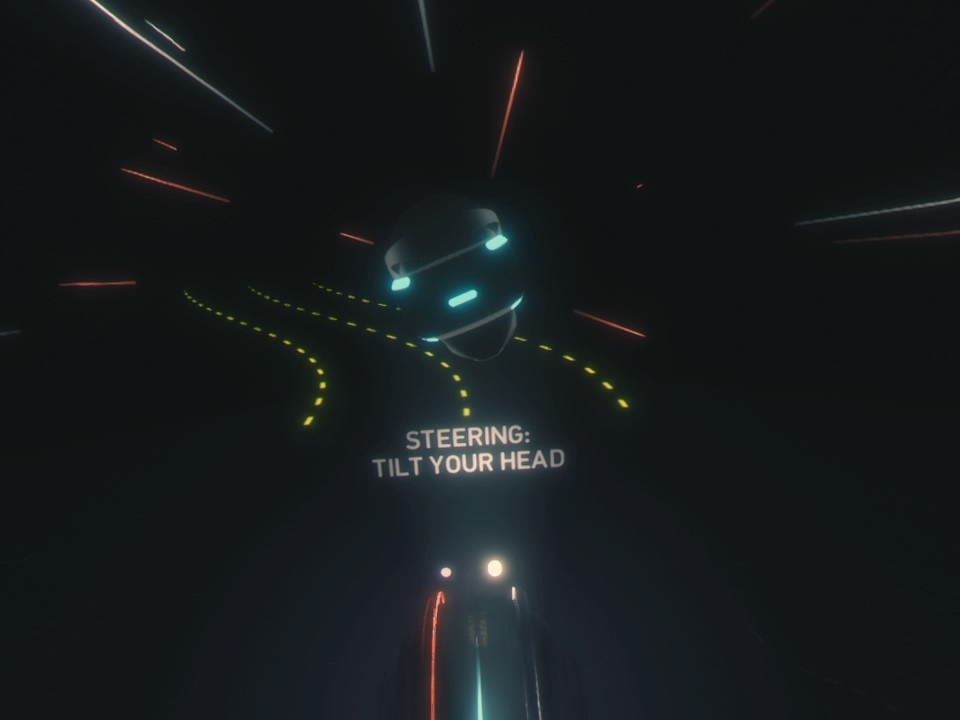 As its title suggests, this is a luge run, or set of runs. No controllers are used, and the only input by the player is made via tilting and turning their head (picked up through the headset). I have no idea if an actual luge is controlled this way, but if so, then that's quite unappealing.

The game elements that were tacked-on to this extremely shallow end of a thing include a time bank and obstacles that, for the most part, such as the running traffic, don't have traditional collision, instead rolling through an 18 wheeler results in a speed penalty. Mostly, I still tried to avoid the cars and similar obstructions (rocks, construction vehicles). An over correction or violent tilting of my head would cause me to bounce off the side of the route (and careen back and forth getting slower and slower). There are four runs, but it's really just the same environment recycled a few different ways. This one is crummy enough in my view to warrant going away forever.

While 'VR Luge' made controls via head-tracking seem criminal, 'Danger Ball' does nearly the opposite. There are some massive arena trappings which don't exactly make sense (it's a massive 3D arena, but you and your opponent play within a box the size of a cargo container and the audience can't see within). The main benefit of the big arena setting is that when I won, the opponent would briefly come face-to-face, writhe in electric pain, and then fall into oblivion. (These opponents come back readily enough for new matches, so again, the theatricality outweighs any sort of logic.)

The game is simple, get the floating ball past the opponent while it tries to do the same to you. First to 5 points wins. If this sounds a lot like air hockey, I'd say that's a clear inspiration. The difference here is that this is 3D (up and down as well as left and right), and that there is a variety of computer opponents that have different shapes and abilities. 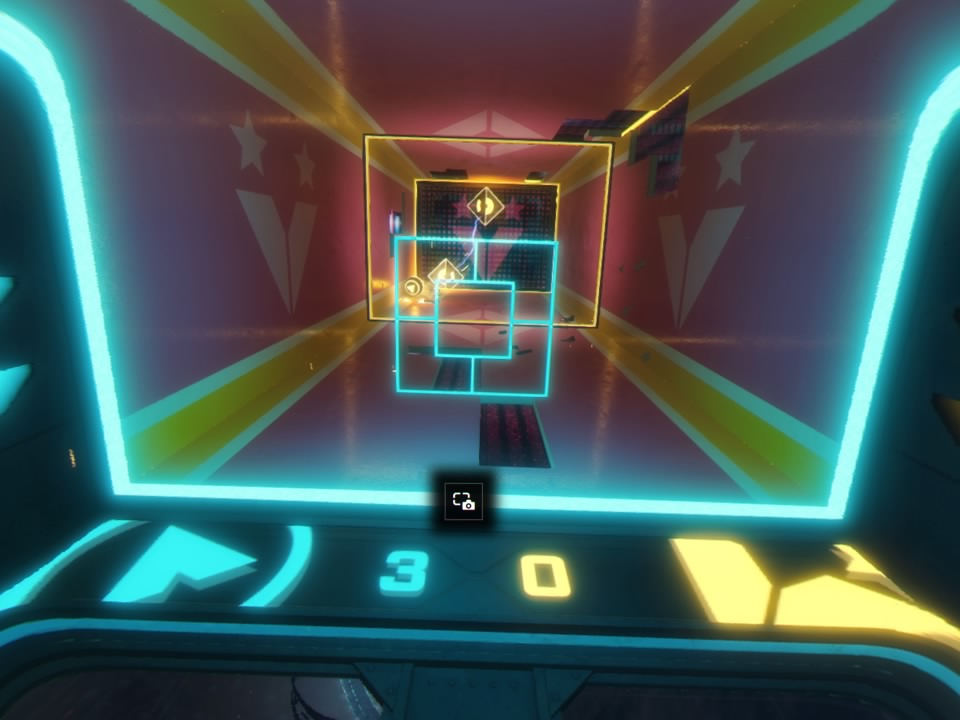 The six round tournament mode, with its mystery opponents and scaling difficulty is well worth playing. I found myself really taunting and cursing the AI, which is a sure sign of enjoyment. (I happen to enjoy air hockey in similar manner occasionally.) By way of a quick motion when hitting the ball, either power or a spin can be applied. It's not super deep, but there is enough there to get really into in a 'Wii Sports' kind of way. And yes, my neck did get tired out to a degree. 'Danger Ball' is fun enough that it should be its own icon in the PS4 library, installed and ready to go at any time.

There is a Score attack mode where the ball is constantly returning against a wall with target zones, but this did not really engage me.

'Ocean Descent' was also one of the earliest demos for what would become 'PlayStation VR.' The experience puts the player in a diving cage descending down into the depths of the ocean. There is a little story to this coming via a comm line. The events are linear, and the user can only really look around. 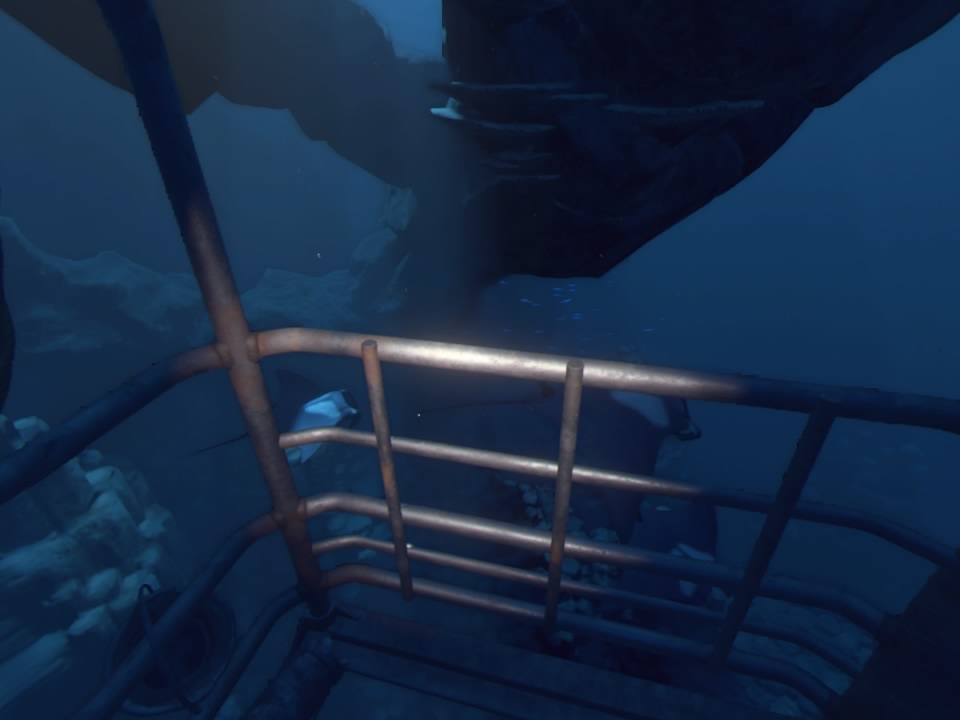 The story descent is a little fun, and its true purpose of getting the user to gaze around at shiny things is never far off. There are two other, non-story dives, but these are just the same content as that first experience, but with even less going on.

'Scavenger's Odyssey' might be my favorite of the bunch as it combines many of the effective elements found elsewhere in 'PlayStation VR Worlds.' The player, being some sort of apparent genetic under caste, has been placed into a mech-like vehicle and given a directive to scavenge an artifact. 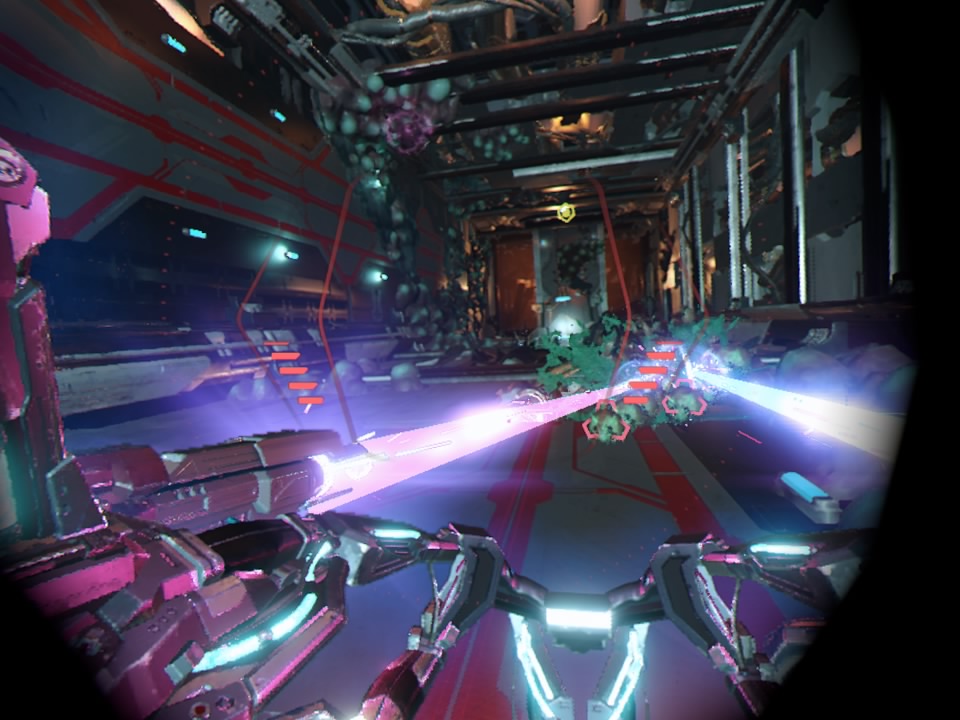 This controller-based affair was a blast for me. The mech can move, jump, use a set of twin guns, and grapple and throw stuff about. With the jump, it's of the VR-friendly kind where the player points to where they want to jump to and then executes the jump. An acceptable target is green, and unacceptable one is red. Not only does this allow for quick movement, which is great for fighting off the swarms of enemies of different sizes in tight spaces present throughout the chapters, but it also lets the player navigate easily through the shifting perspective of the rocky outer space ship wreck.

The story pushes the right buttons to engage a little drama and welcome narrative, but it's the control and the level/encounter design that make this experience fire on all cylinders. I first started out wondering if I would like the controls and if the jumping would give me a motion sickness trouble, but in no time I felt adroit moving around and engaging the swarms. 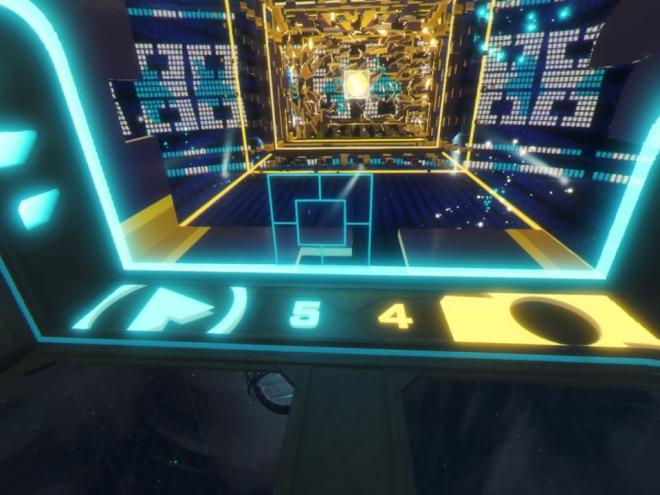 The visual quality here is a little all over the place, but again, it's mainly the crummy 'VR Luge' that lets down the side. The initial menu is very nice, and has a crumbled alcove to go with five intact ones. 'The London Heist' does well enough thanks to the mo-cap and character models, but it's no 'Uncharted 4.' Ditto for 'Ocean Descent.' 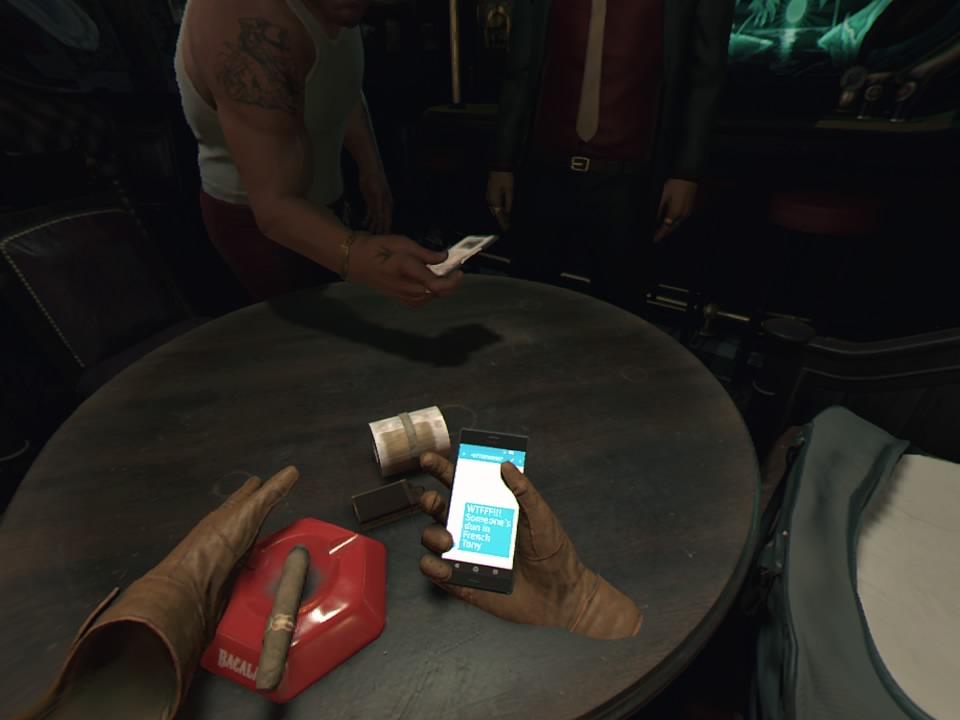 'Danger Ball' is simple but does well with that 'Tron' like look. The 'VR Luge' could really do with a second environment, but it still would be 'VR Luge.' 'Scavenger's Odyssey' has some great vistas and freaky VR character arms. It's a sexy pass on the enemy bug models away from finishing a great look. 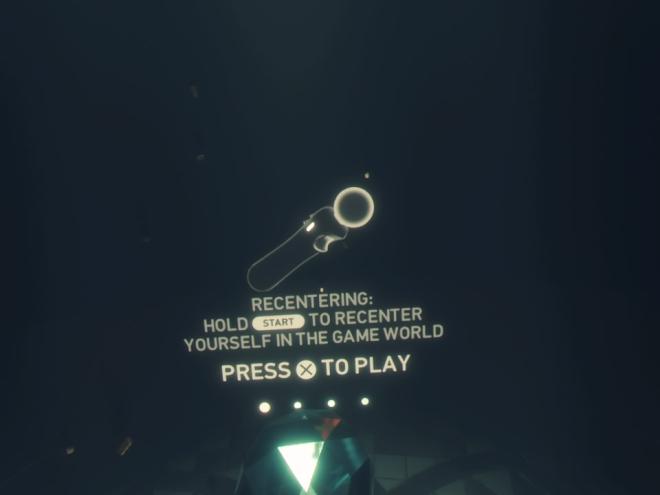 These experiences do pretty well with 3D audio. 'The London Heist,' 'Ocean Descent,' and 'Scavenger's Odyssey' do nicely carefully mixing in dialog and sound effects without going bombastic. 'Danger Ball' is more basic, but again achieves a sense of 'Tron.' The 'VR Luge' has rolling sounds to go with the scraping and car honking.

The menu has a funny ambience that surprises when looking at each specific experience. 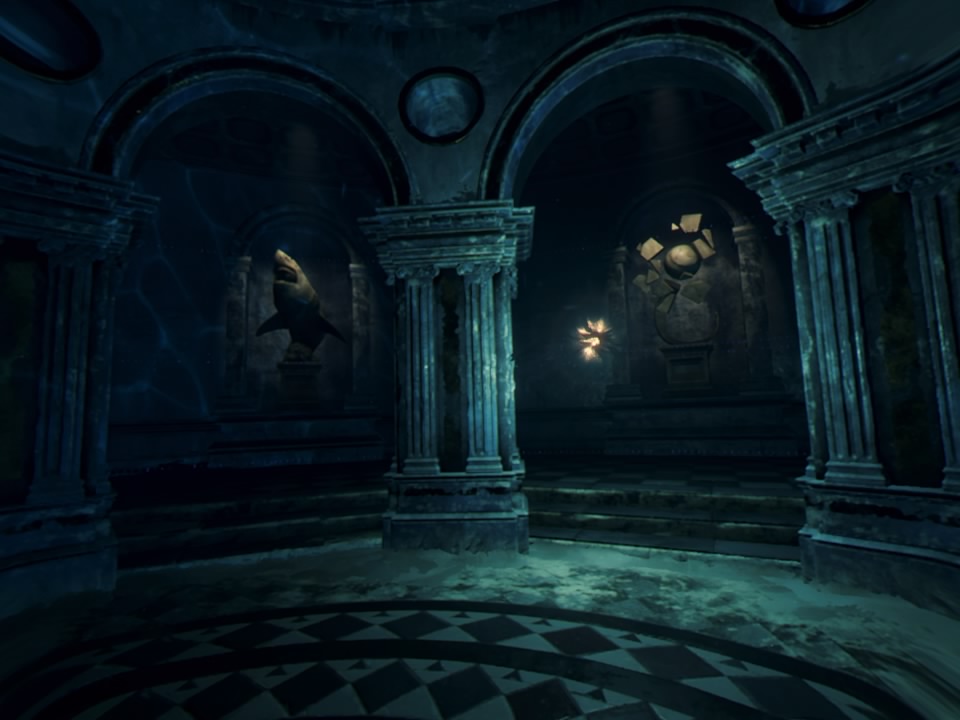 As with many such VR experiences, 'PlayStation VR Worlds' is kept short and sweet. There are Challenges for each experience, and some of those can compel replay. The entire game will prompt the user when taking off and putting the headset back on to possibly change profiles in case the headset has been passed on to another person. The thrust of this disc can be played in just a few hours, but owning it makes sense as a launch showcase. Even so, I'm prefer having gotten it in the Launch Bundle rather than as a $40 title. 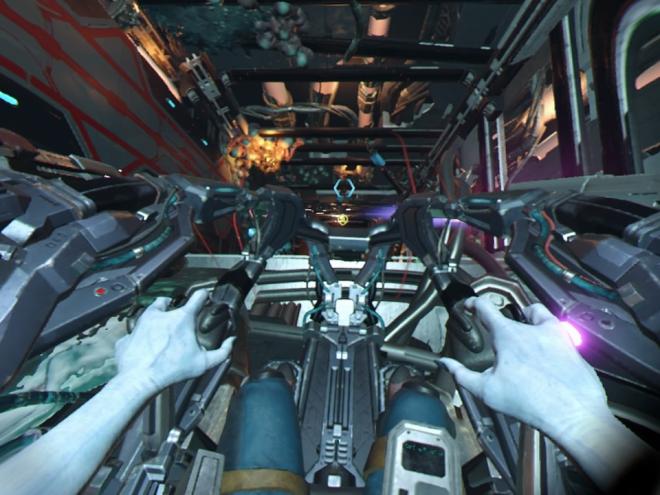 The meekly named 'PlayStation VR Worlds' rarely escapes its origins as brief demonstrations, but it is certainly worth checking out as part of the greater 'PlayStation VR' launch experience. Some of the five experiences bundled here could make for great fully-realized titles, and failing that, this disc version is ready for any time I might want to show 'PS VR' to others. Plus, the game case makes for a smart place to keep the PlayStation VR cleaning cloth.