The Game Itself
2 Stars
The Video: Sizing Up the Picture
4 Stars
The Audio: Rating the Sound
3 Stars
Replay Factor
2 Stars
Bottom Line
Skip It

This new 'Battlezone' is a successor to the 1980 tank-battling arcade original, which might be considered the first-ever virtual reality game. That version, developed and published by Atari, had a special "periscope" viewfinder that players looked through to get a view from inside their tank — which makes Rebellion's revision 26 years later seem like the perfect introduction to VR in the home. Now, the PlayStation VR headset puts players directly into the cockpit as they engage in cooperative and solo campaigns.

This new 'Battlezone' adds a few layers to the arcade action of its predecessor. Taking on a bit of influence from roguelikes, the campaign features procedurally-generated maps composed of hexagonal "nodes." On each of these, a different challenge or opportunity awaits. The vast majority contain missions for the player to complete, while others offer the ability to purchase new weapons at supply points or unlock special rewards.

The general idea is to move from one end of the map to the other, weakening foes and strengthening allied forces through various missions, with the end goal of withstanding the enemy's final assault. Players can choose to tackle the campaign online with others, or they can opt to play in Offline mode by themselves. 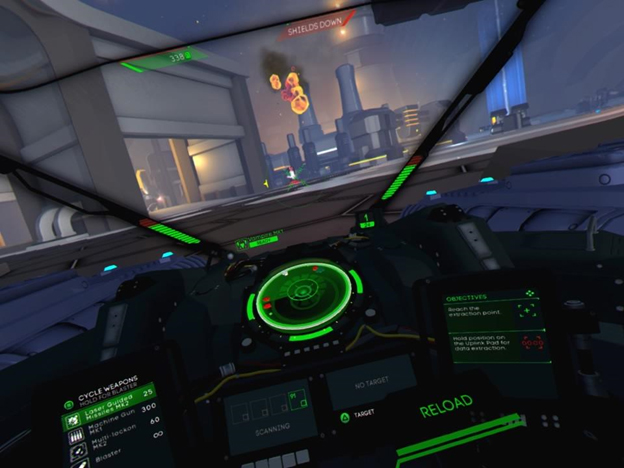 Just like the individual nodes on the map, the actual missions are randomly selected once engaged. There's a good variety of them — just to name some examples: annihilating all enemy forces, escorting computer-controlled allies, defending an allied base and destroying an enemy generator all sprung up during my time with various campaigns.

I found that controlling my tank was a pretty simple, intuitive process (or at least it seemed to be at first). Like any shooter, one stick aims and one stick moves the player around. Important information, such as available weapons and ammo counts, is visible on various displays scattered around the tank's cockpit. Dealing with different types of foes often requires switching between weapons, which is easily done with the press of a button. Experiencing the rush of battle is initially a thrill.

Unfortunately, completing the aforementioned mission types is often easier said than done. Firstly, the game doesn't do a great job of explaining everything on the HUD (simple labels would have helped a great deal), and it makes some odd choices in the gameplay department. It wasn't until I did a bit of research online that I discovered using the "boost" button to make the tank go faster actually uses up its shields. 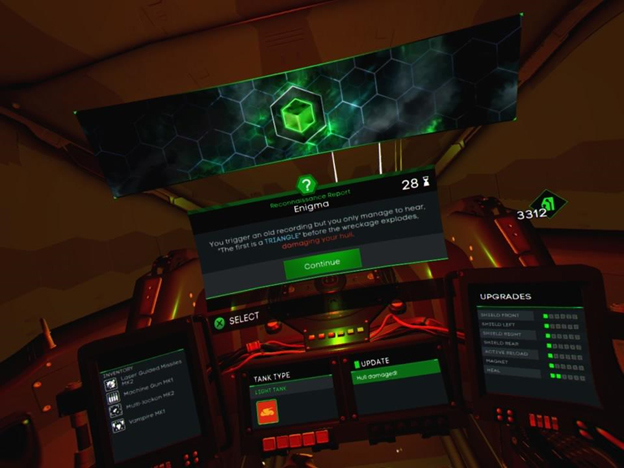 This problem is compounded by the brutal, unrelenting difficulty. The one valuable metric of progress seems to be the data collected upon defeating enemies, which can then be spent on extra lives, stat upgrades and new weapons. Sadly, even when playing on the lowest difficulty, I never seemed to have enough money to compensate for the increasing challenge of the enemies — I felt like I was behind the curve, and falling back further with every mission.

That feeling was undoubtedly caused by just how nasty the missions are to complete in the first place. Enemy tanks fire with frankly maddening precision; no matter how much I attempted to strafe left or right, I seemed to be damaged more often than not. These tanks don't hold up to much, either — just a few hits and I was toast. At one point, out of pure frustration, I switched to a "heavy" unit in hopes that it would provide me with better protection. Instead, I found that its sluggish movement speed only made it more difficult to maneuver away from incoming enemy projectiles. Worse yet, I didn't notice any significant improvement in the damage I could take.

Along with the other issues I mentioned, such as the developers' strange choice to have faster movement eat up the tank’s shields, this difficulty just adds to an overbearing sense of futility. It's bad enough that player units can hardly take any punishment at all, but to punish them further for the luxury of somewhat faster movement seems downright sadistic.

Ultimately, it didn't matter whether I was playing cooperatively or all by my lonesome. Attempting a mission was often met with swift and inexplicable failure — and since it was difficult to figure out what went wrong, it was even more difficult to work out a game plan for improvement. This led to me getting very discouraged very quickly, and I found that I didn't really want to play the game for more than 30 minutes or so at a time. 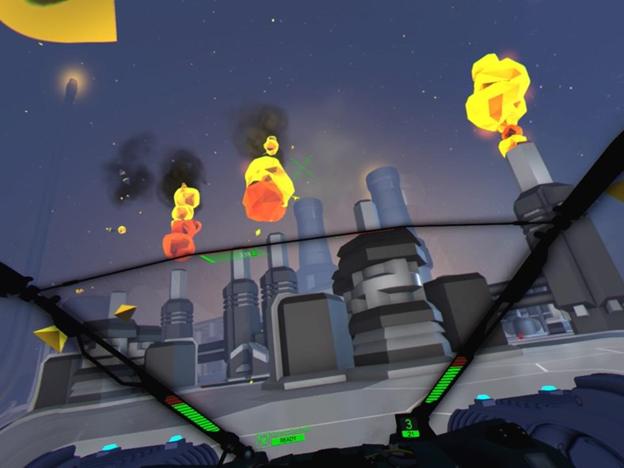 The visuals in 'Battlezone' are easily the best part of the package, making the player feel as though they're actually seated in the cockpit of a tank. It's interesting to physically look down and see the various information on displays littered around the bottom of the screen, like ammo counts and remaining lives. The colorful, hyper-stylized polygonal visuals of the battlefields and enemy units are a wonder to behold in stereoscopic 3D, and I particularly enjoyed peering up to see the towers and generators extending into the sky. I don’t generally have motion sickness problems in VR, so others' mileage may vary, but Battlezone's controlled pace and relatively straight camera angles were pretty easy on the eyes for me. 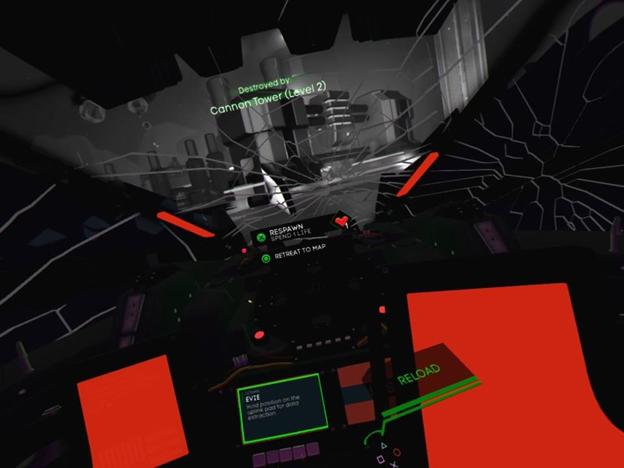 This is one to play with headphones on. The 3D audio makes for a much more immersive experience, surrounding the player with the booms of gunfire and explosions as battles rage on. The electronic music that accompanies the sound effects isn't particularly inspired or memorable, but it's energetic enough to capture the spirit of fast and frenetic tank combat.

Players who are able to ignore 'Battlezone's flaws will find great replay value. The procedurally generated campaigns mean they'll never go through the same adventure twice, and the online co-op seems tailor-made for repeat visits. Unfortunately, due to many of the problems outlined before, it can be tough to get into the action in the first place. Unforgiving difficulty — even on the lowest setting — will discourage many players before they have a chance to finish one campaign, let alone several. 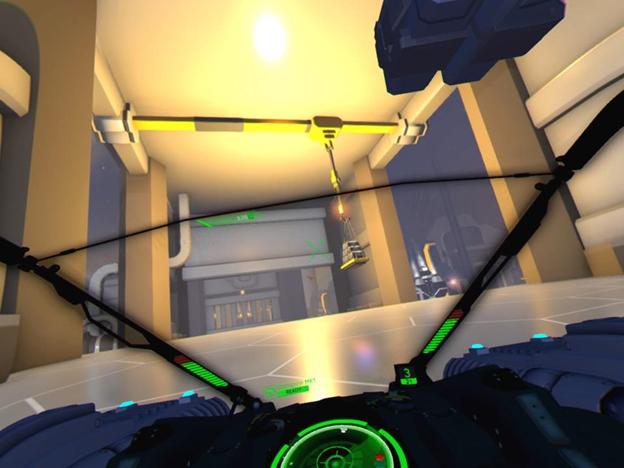 'Battlezone' feels like a serious missed opportunity. As the successor to what many consider the original virtual reality game, I expected Rebellion's revision to be an accessible arcade battler — the sort of game that would make a great introduction to home-ready VR. Instead, this new version takes its influence from more modern inspirations, including roguelike elements and procedurally generated maps.

That's not a bad thing on its own, but the implementation of these elements is incredibly frustrating. Whether I was playing with a team of other tanks or going it all by my lonesome, the brutal difficulty and lack of direction often crushed my motivation to give it another go upon failure. That's far from the addictive, infinitely replayable experience 'Battlezone' seems to have been aiming for, leaving it firmly in "disappointment" territory.