HyperX Cloud Stinger headset reviewed using a variety of devices, including the PS4, Xbox One, and PC.

Everyday, millions of people of people put on headsets for work and for play. And when it comes to gaming headsets, the reputation hasn't always been great. But with HyperX, there is respect.

Over the past few years, Kingston's HyperX brand has done an excellent job of delivering the kind of wired gaming headset that everyone should want. I'm referring of course, to the Cloud and Cloud II. More recently, HyperX has begun branching out in interesting ways. The latest incarnation is the HyperX Cloud Stinger.

The Cloud Stinger is a lightweight headset with a boom mic, but its flat black, fold-flat body promises more than meets the eye.

Few things are more indispensable in gaming than a headset, but there is a catch. Said headset must be useful in a variety of situations, it must be dependable, and it must be wearable while still being durable.

At $49.99, HyperX is entering the Cloud Stinger into an extremely competitive price bracket. That's with good reason, after all, the first stop once players decide to move up from $15 earbuds is the sub $50 range.

But like with video games themselves, the price point only takes you so far.

And speaking of video games, let me diatribe here in my review, and offer a little insight. Whenever something really successful and grand, like say 'Deus Ex' or 'Grand Theft Auto' is ported over to a weaker platform, the developer doing the port has to make certain choices. A good port of a game contains the boiled down essence of original experience.

So where the HyperX Cloud II (easily one of my favorite headsets) does it job so well, the less expensive Cloud Stinger does its job well, but in a slimmed down package. 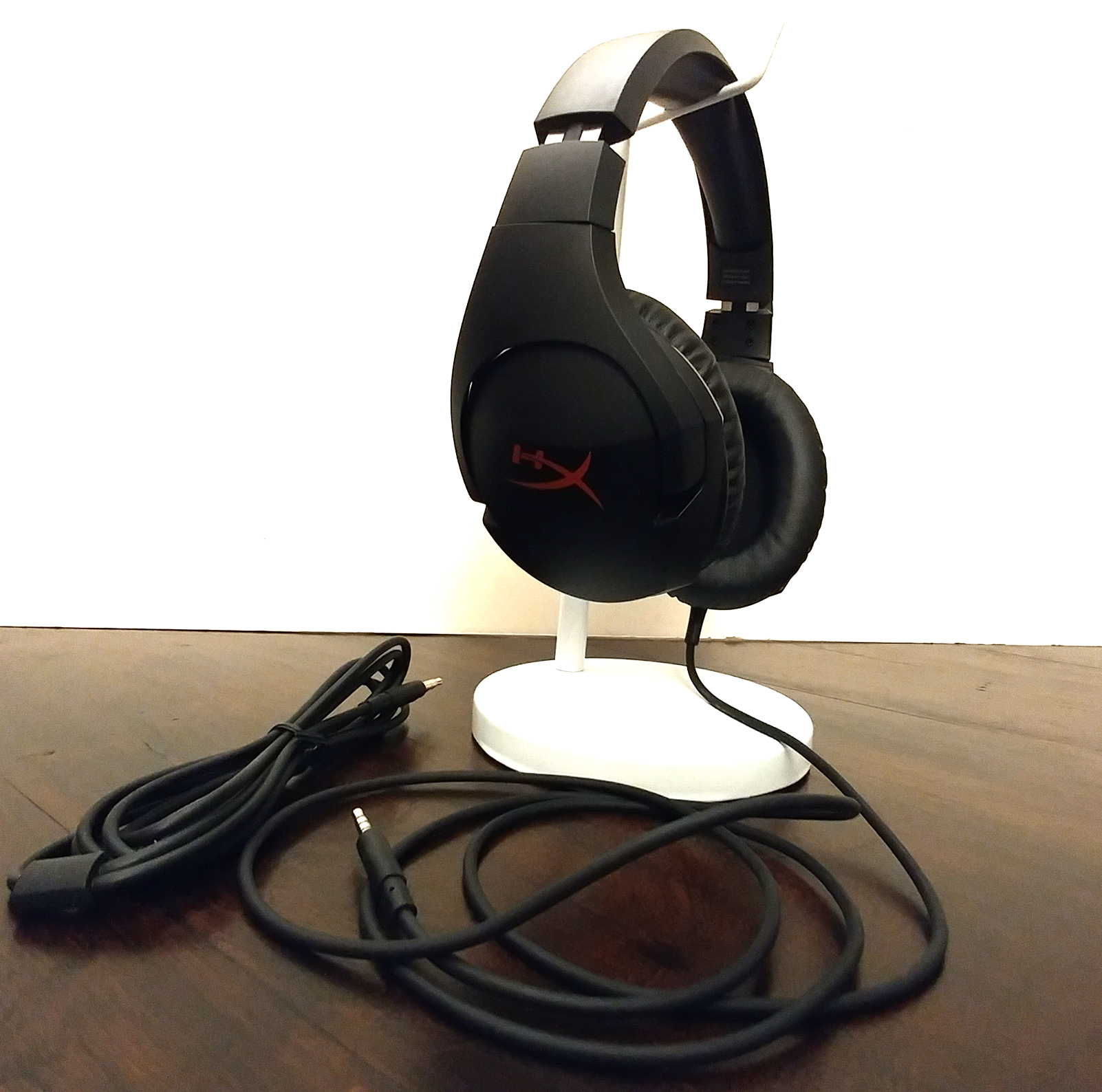 But the sound isn't so slim. The Cloud Stinger uses 50mm drivers, which when combined with the plush but taught memory foam in the earpads does an excellent job of making the most the of the 3.5mm port on the PS4's DualShock 4 controller. Firing up both 'Call of Duty: Modern Warfare Remastered' and 'Call of Duty: Infinite Warfare' on the PS4, and it's immediately obvious that the Cloud Stinger sounds excellent. The stereo presentation is clean, and the lightness of build, and the way that the ears rotate just enough to orient the drivers toward the ear while allowing the fit to be comfy, all make for a stellar headset offering. 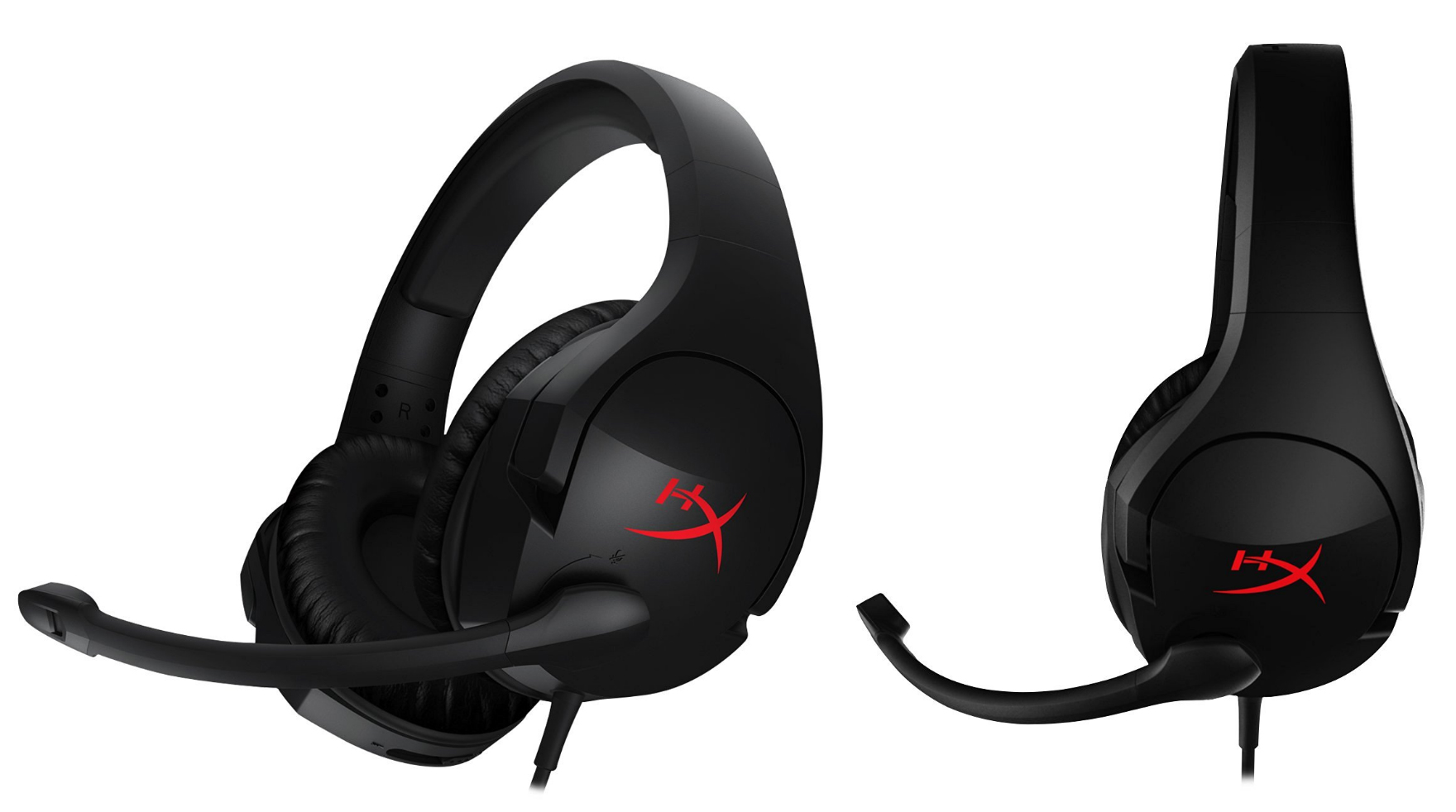 It's not just lightness and fit that helps the comfort level, the Cloud Stinger has a volume slider which is essential, especially on the PS4 or on the new Xbox One controllers, including my beloved Elite Xbox controller. That volume slider is on the bottom of the right ear (opposite the mic on the left ear), and that leaves the cable free of any inline controls (which can normally wind up tugging in some way).

The cord has a nice rubber texture and mercifully is not covered in nylon. Nylon cables are really in vogue right now, and unfortunately most of them transfer noise. (But you know, only when anything like the wearer's shirt rubs on the cable.) 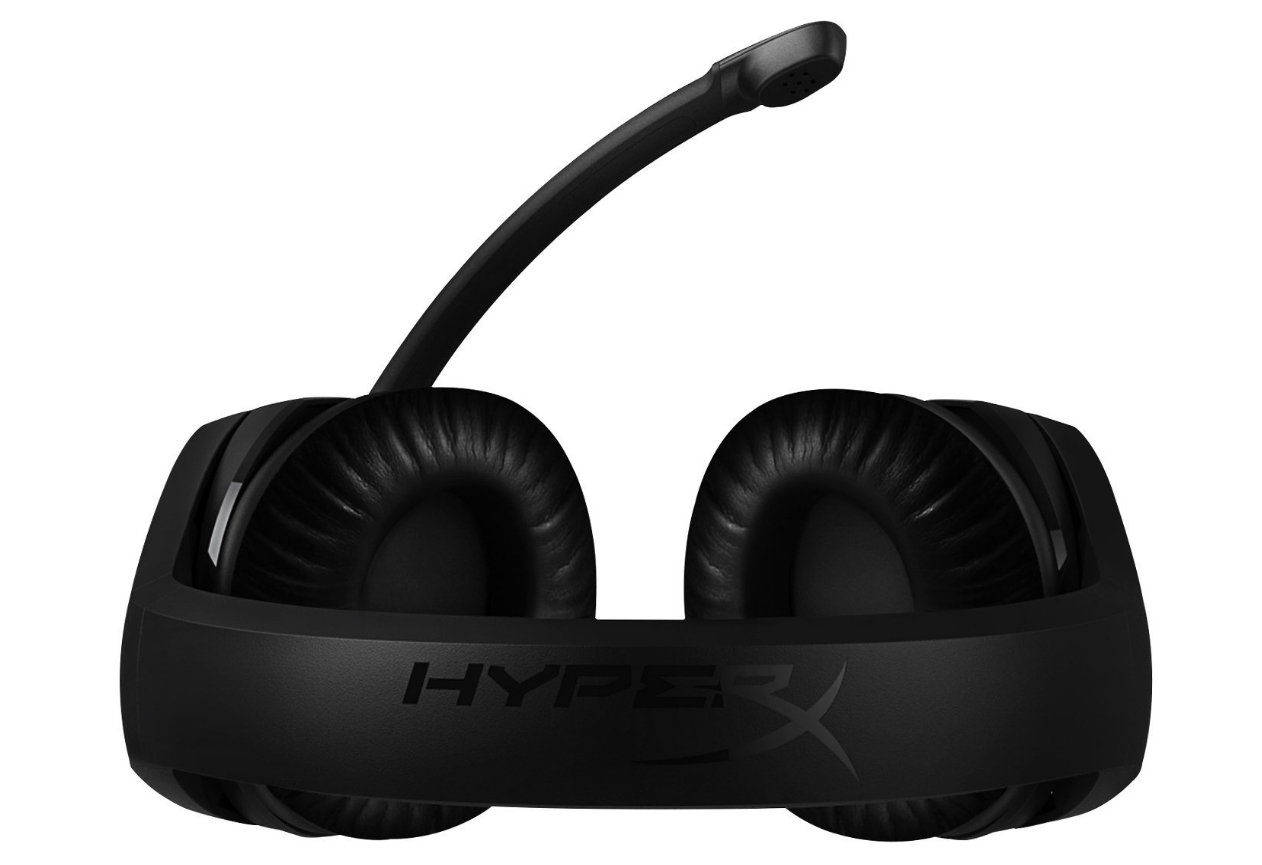 Adding the Cloud Stinger to the Xbox One S (via controller) and playing 'Forza Horizon 3,' and It would be easy to wonder why you need a better sounding headset. Once again, the Cloud Stinger makes the most of the stereo sound coming out of the controller.

The boom mic on the left ear pad flips down, and its rubberized casing holds whatever angle I choose for it. This flipping up and down motion has an audible click which signifies when the mic gets muted and unmuted. This feature and mic shape is quite reminiscent of the ASTRO mics, but the feel is tighter here. Again, I like that having the mic mute not on an inline control leaves the cable free to just be a cable and not an anchor.

The cable ends in a four pole 3.5mm that mates with everything with a headphone jack. (So not an iPhone 7 unless using an adapter, but everything else.) There is a combination audio and mic splitter and extension for use with a PC (or a least a PC with mic and audio separated in the classic fashion). This is a nice inclusion and a great bonus, and I like this particular cable better than many other, shorter adapters. With 'Civilization VI' right around the corner, having a new comfy headset that I can use while getting sucked into my first run is nice a pairing. On my main PC, I have an external DAC, soundcard, and headphone amp, and so that extra cable included with the Cloud Stinger is necessary. 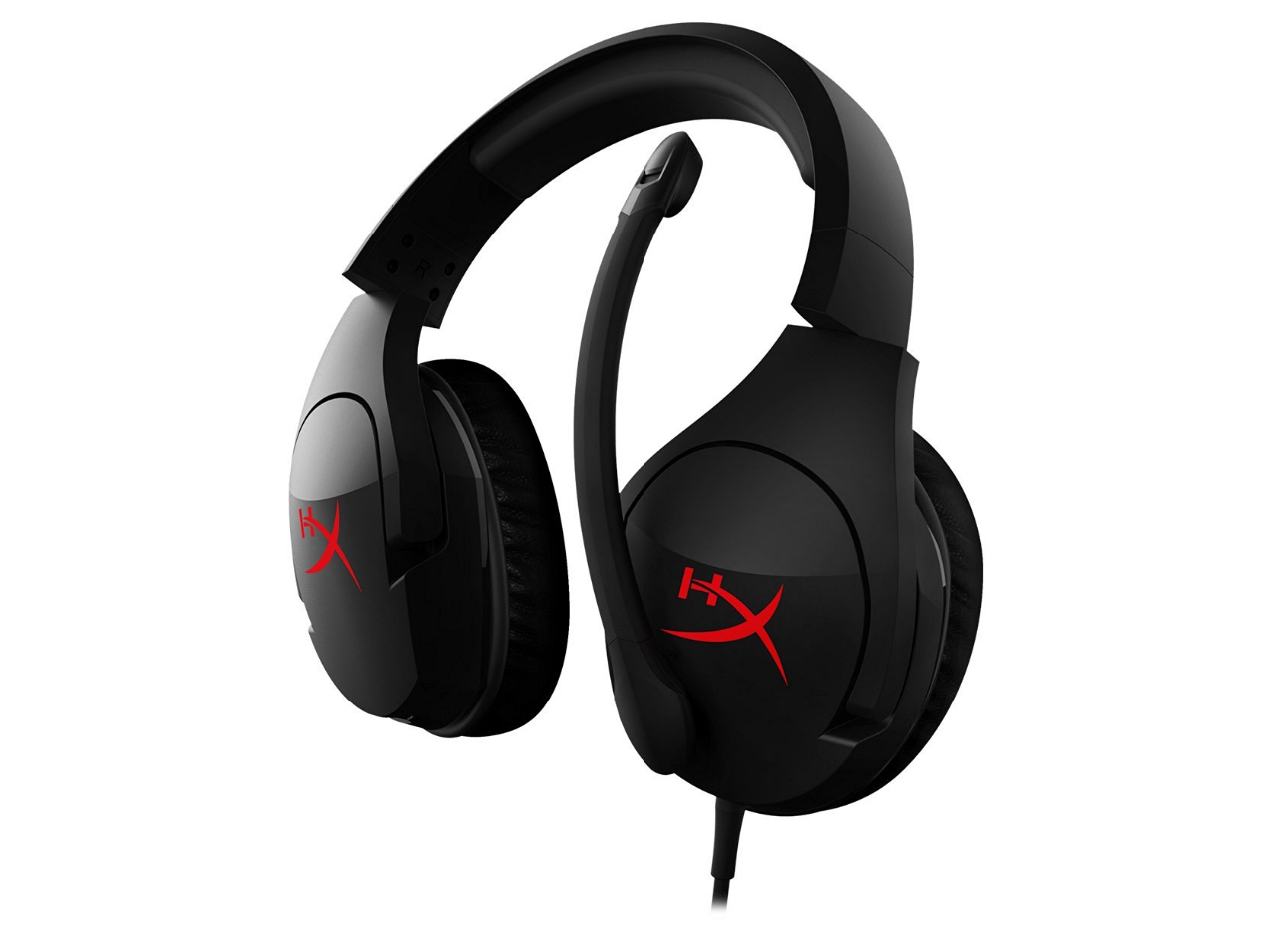 This headset checks in under 10 ounces, and those ten ounces are distributed carefully. Underneath the matte plastic casing, (there's a dark red logo on each ear, which keeps the look sedate) there is a steel band, which gives the light headset a stout feel. The ears of the Cloud Stinger fold flat which is a feature that really makes wearing the headset on the neck and packing it away much easier than a fixed design.

The cable is fixed and feels smartly made, but this is one area of concern. A detachable cable, though still a potential failure spot, would have been nice to have. 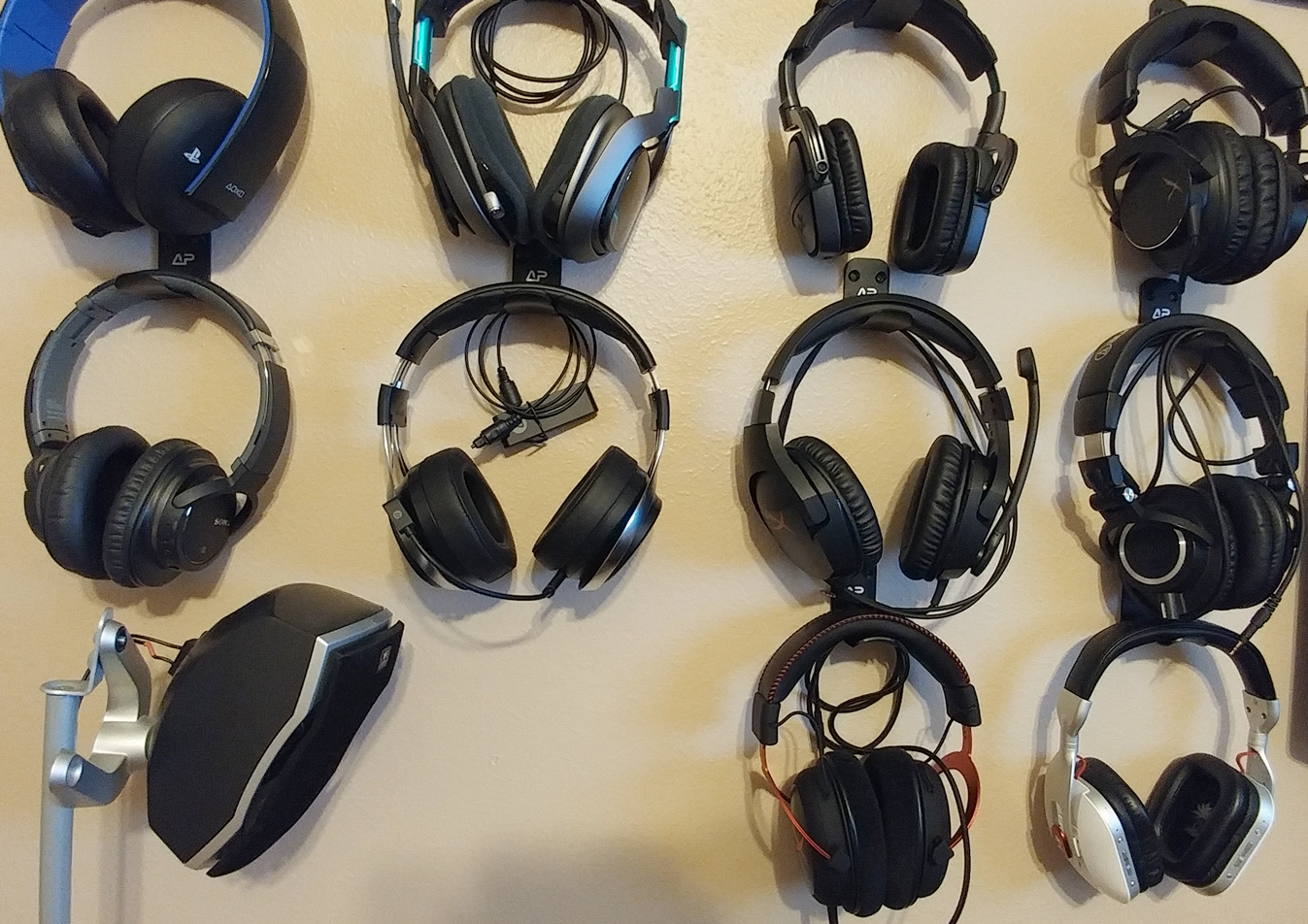 The HyperX Cloud Stinger is one of the best headsets that I've used or handled this year. The fixed cable is the one thing that gives me pause, but the Cloud Stinger basically nails each area of concern for a $50 headset and elevates the category. It's great with the premiere platforms like the PS4, but will work with anything based off of a headphone jack.