Creative Muvo 2 Bluetooth speaker (Metallic Blue) reviewed with a variety of devices, including a Windows 10 PC and a LG G5.

After spending much of 2016 (and 2015) on the road and in hotel rooms, I began thinking that I wanted a new Bluetooth speaker, one that was light, splash proof, and versatile. Basically, whenever I pulled out my laptop, iPad, Vita, DS Lite, and even my phone for gaming, I wanted the option to get good sound without necessarily being confined to headphones.

My first candidate in this search is a new entry in the Creative Muvo series, the Muvo 2. This compact, twin-driver water and dust resistant speaker supports Bluetooth 4.2, but it also supports 3.5mm, an internal microSD card, and a USB PC connection.

Right off the bat, the Muvo 2 came across with a style factor that doesn't necessarily come through in pictures. Creative has elected to use some elaborate hard plastic casing for the product box, and the speaker's Metallic Blue looks good under the clear plastic. After extracting the speaker from the plastic box, its light 11.71 ounce weight (weighed with the microSD card) is surprising, especially compared with the boxed weight. Along with the nice color, the Muvo 2 has a slightly rubberized texture which is cool to the touch as well as good in a space age type way. 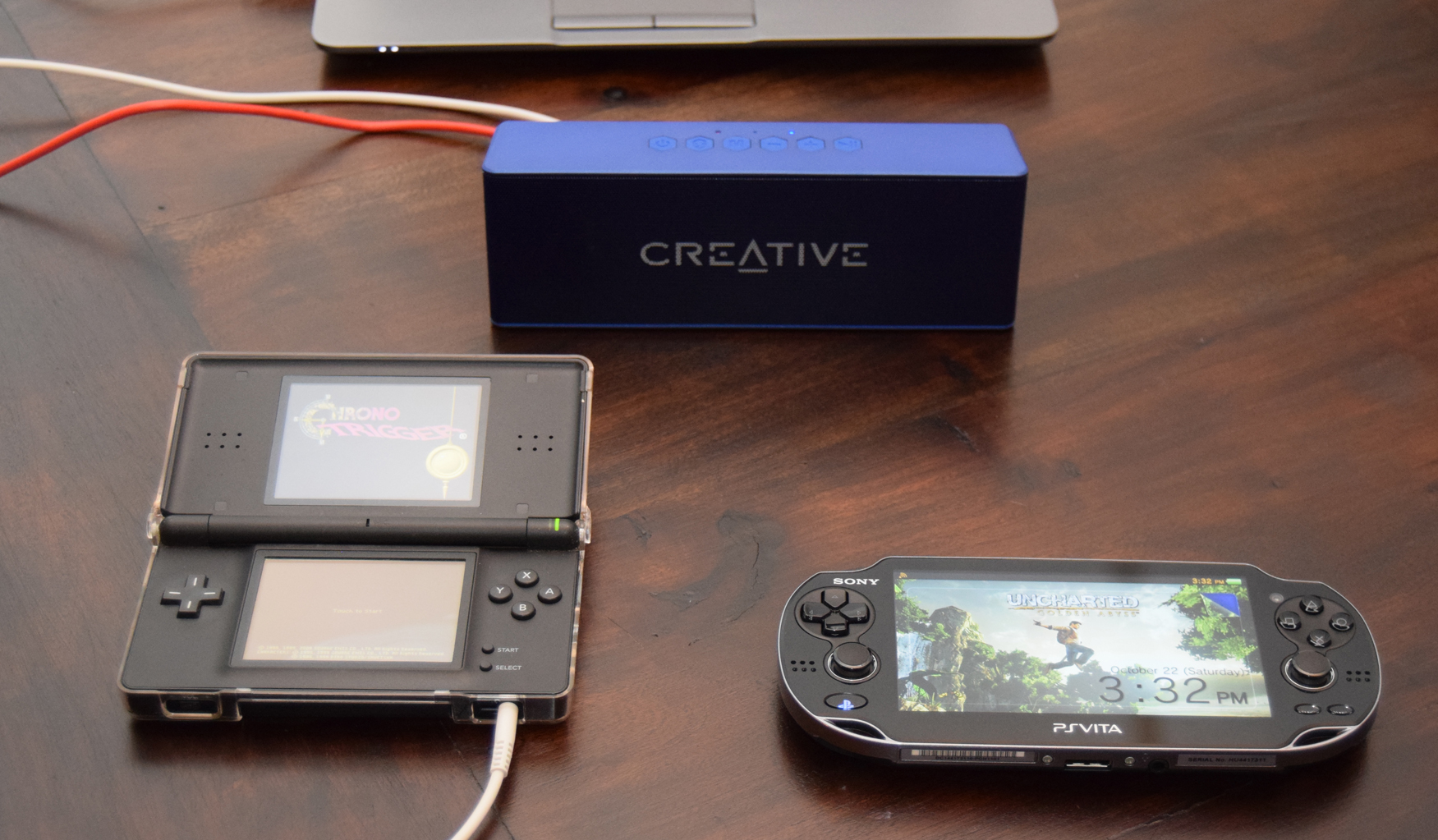 The Creative logo on the speaker grill is the only non-blue aspect to really be visible on the speaker, and the effect pops and makes it seem like everyone should be putting their logos right on the grill. Under the grill, the Muvo 2 houses two drivers and a center radiator, which lets the speaker have some balance to go with its punch while at the same time keeping everything protected. (I always cringe with other speakers when I accidentally sink my fingers into the radiators or drivers, or else pack them away badly.) At one point during the review, I even ran this speaker grill under a faucet while listening to a podcast and later while playing tracks off of the microSD card. No trouble to speak of.

So the style, feel, and weight make for a great first impression, and one that holds up well for the most part. On the back there are ports for the micro USB, Aux, and microSD card, and these are kept safe from water by way of an attached rubber insert. This little can be tricky to open up, but it's easy enough to close. 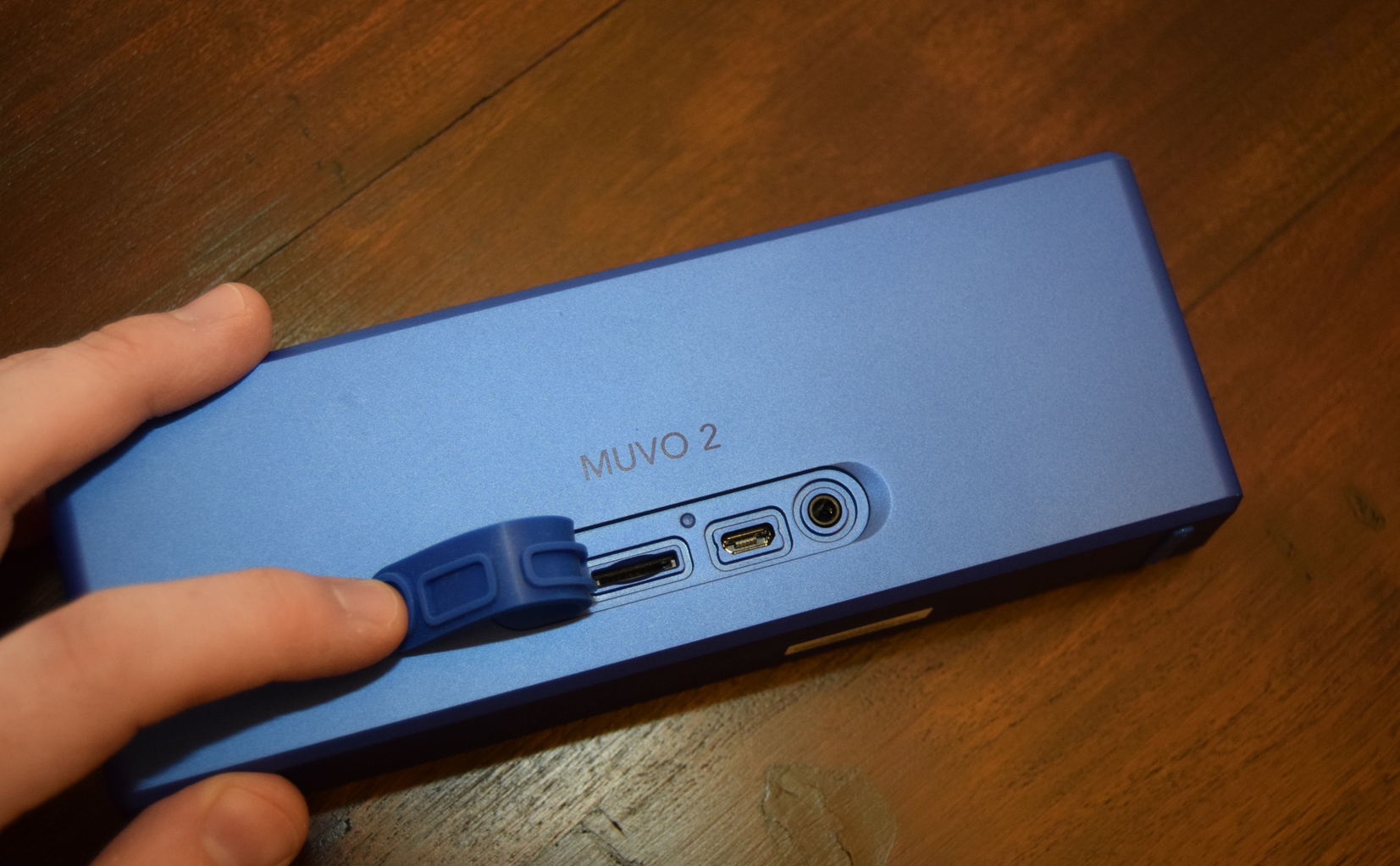 Playing 'Deus EX Go' on my phone as one example, I can connect to the Muvo 2 using Bluetooth, or I can connect using a 3.5mm cable. I can also use my phone speaker play the game sound while I let the Muvo 2 play back something else altogether. These options likely sounds either a little elaborate or a little basic, but this flexibility makes for excellent gaming on the go. In the pictures I've taken, I actually have the Muvo 2 connected by Bluetooth to a PS Vita, by 3.5mm cable to a DS Lite, and by USB to a laptop. Cycling between these sources is as easy as pressing the M button. 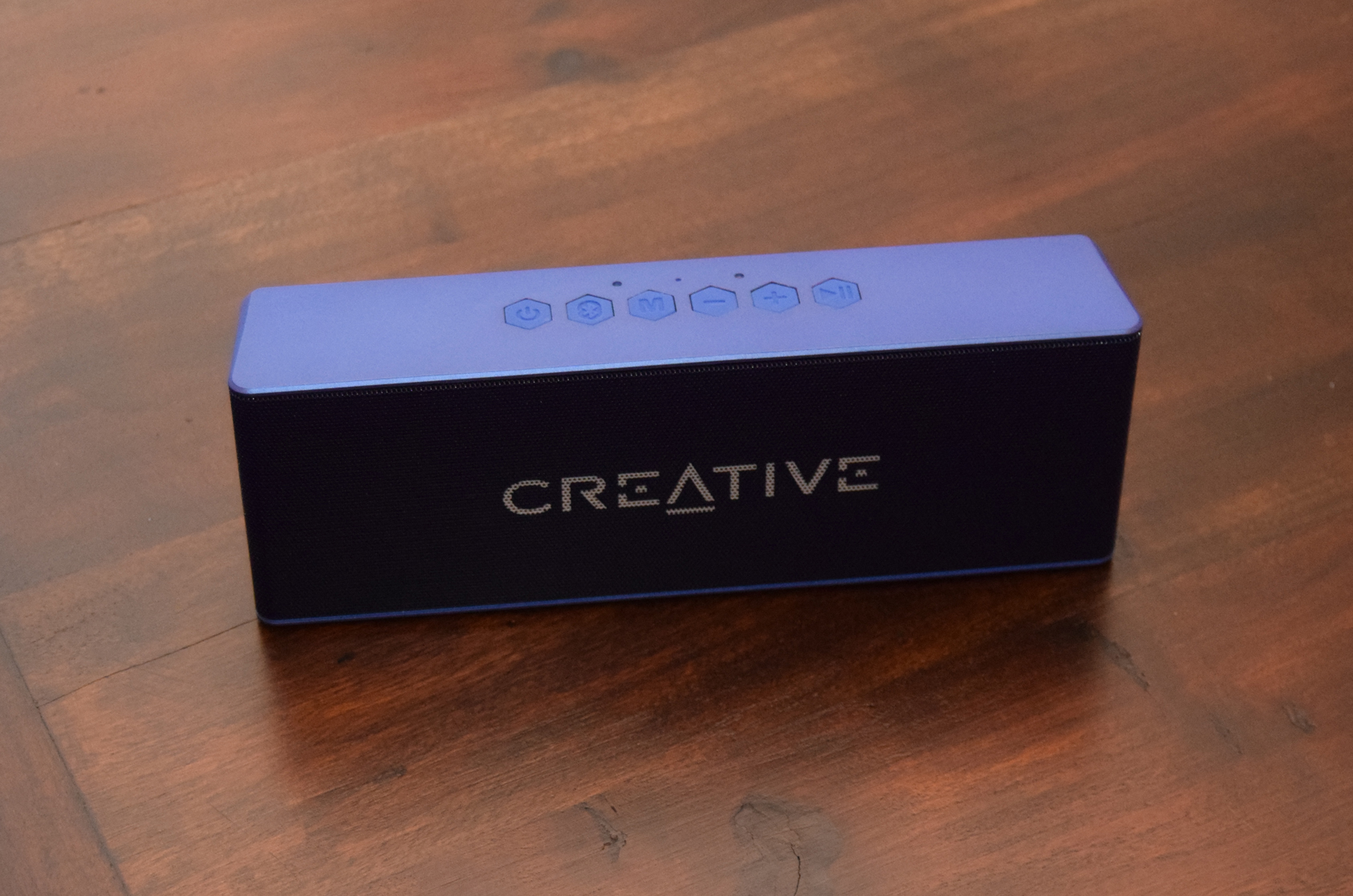 I've found that the Power button, followed by the Volume Up and Volume Down buttons are the most commonly used controls on the Muvo 2. There is also a dedicated Bluetooth button (good for pairing and for answer and ending calls) and a Play/Pause button which is great for Bluetooth media control and when using the microSD card.

The Muvo 2 supports a 128GB card, but I was plenty happy using a 16GB. In addition to MP3, the speaker supports internal playback of WAV, WMA, and yes, FLAC.

Sadly, the Muvo 2 lacks a dedicated Next and Last track buttons. There is a macro for this. Pressing the M button and the Volume Up/Plus button will advance and the track, and a similar combo will do the opposite. There's even a way to navigate folders on the microSD card using such commands. These are very workable controls, but I would have really liked a dedicated Next button. Another function that appears to be missing altogether is a shuffle button. Tracks play in order, and even seem to go through each folder in an orderly fashion.

The first time I fired up the Muvo 2 with a microSD card full of music, it started out playing these game sound effects which were in a sub folder that I forgot was even on there.

The Muvo 2 works as a wired USB sound card with a PC, which is great for when PC Bluetooth doesn't want to work well. There is also some optional Creative software that works with the USB mode. From what I can tell, this software is useful for two things, updating the speaker's firmware and applying one of three SBX sound profiles, Music, Movies, or Games. 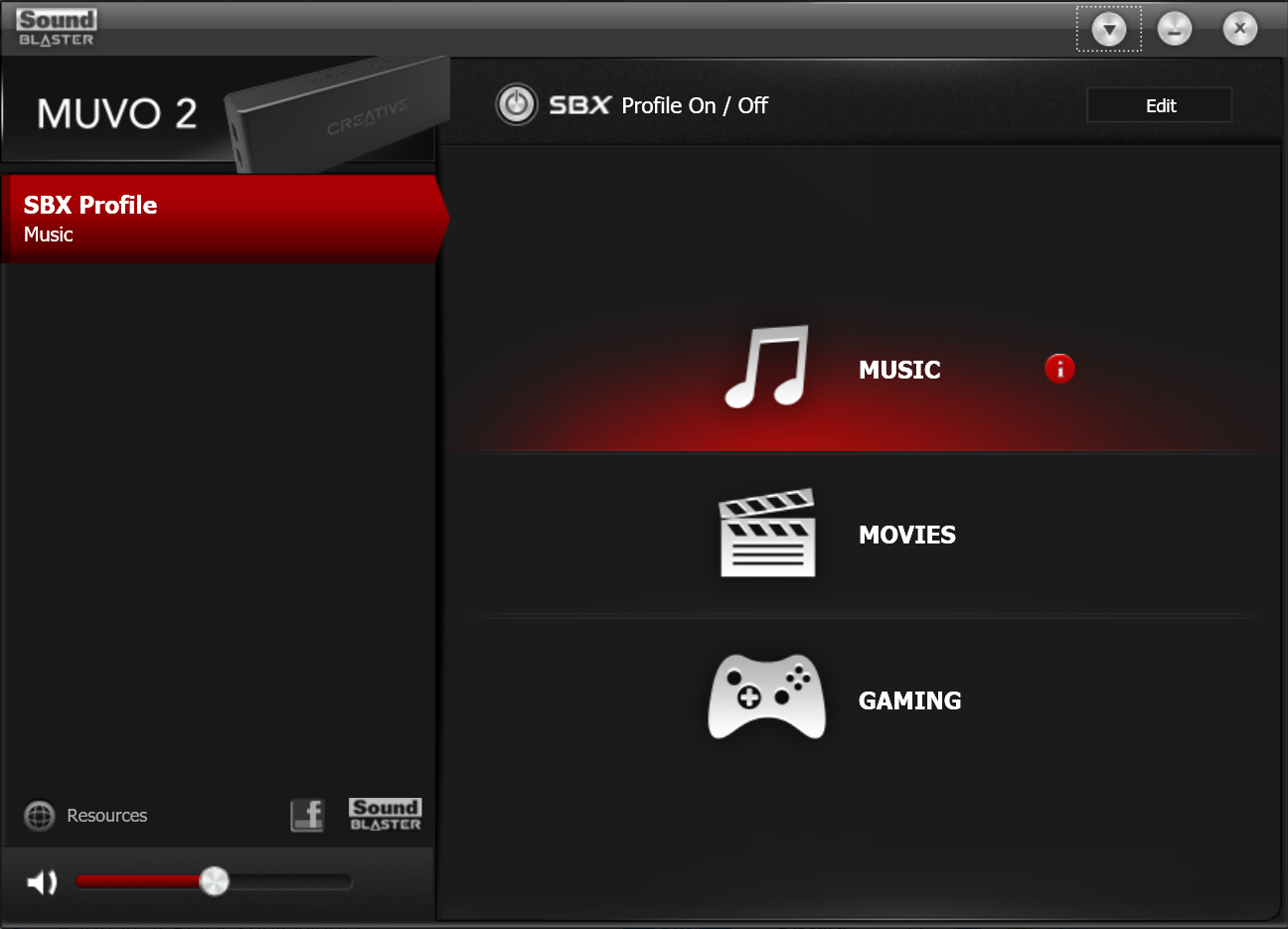 Since I use the speaker for a multitude of entertainment needs, I elected to leave the SBX off. Still, I think this PC software would be a great place to add a shuffle microSD media option. (Come on firmware update!)

One feature that is easy to forget about after hours spent in hotel room isolation is the speaker phone. Even while I'm playing 'The World Ends With You' on a DS Lite hooked up by 3.5mm cable to the Muvo 2, my phone is still connected by Bluetooth. A phone call will ring on the speaker, and I can take it there, using the built-in mic, or toggle on my phone that I want to use the phone's mic and speaker. This is a feature for not wanting to miss calls while dialed into the Muvo 2's sound. 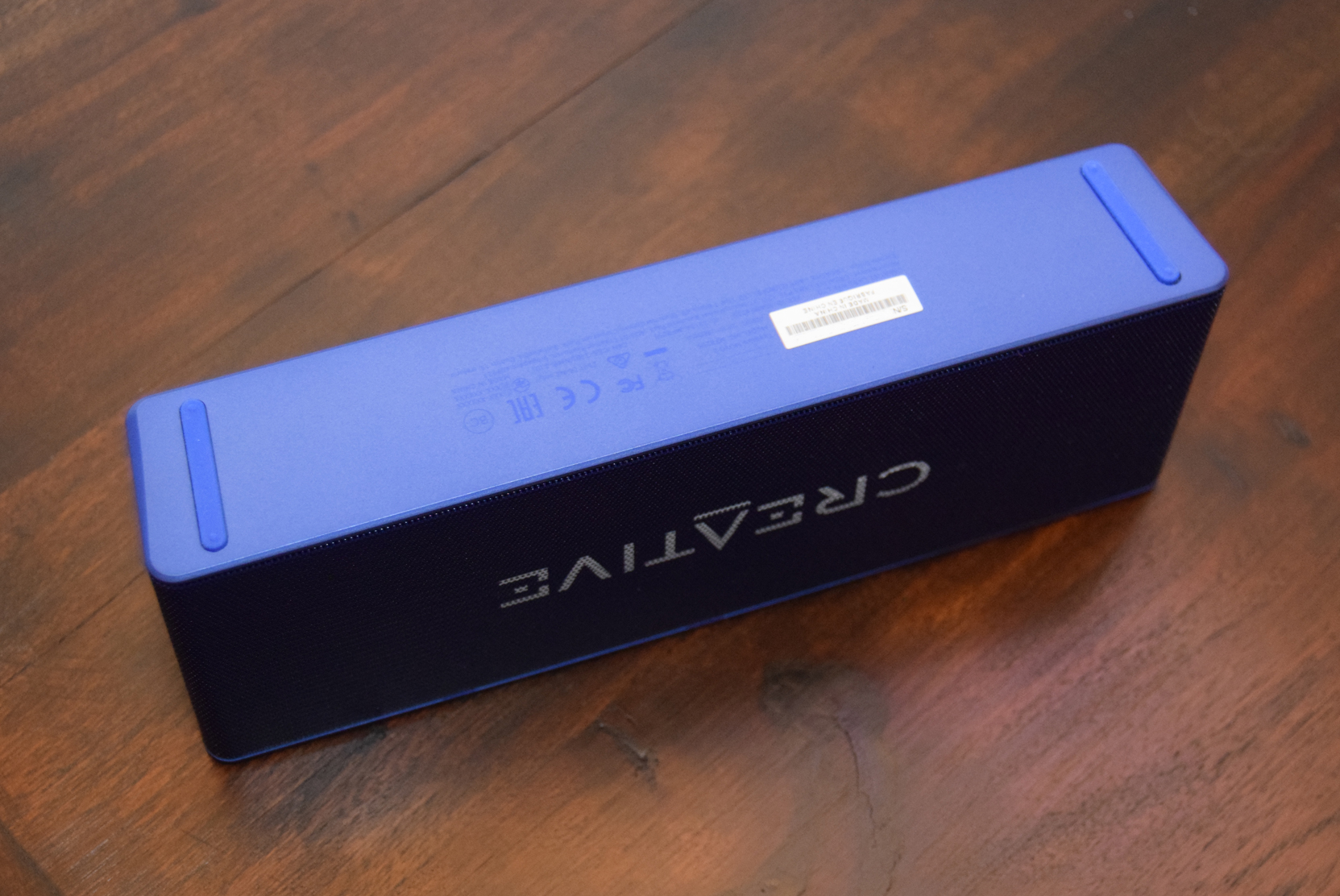 A 10-hour battery life is promised, and seems right. The battery light is not great, but I can check the battery level through my phone. Via USB, it's also easy to recharge the Muvo 2, which is not always true with bigger Bluetooth speakers. Taking the Muvo 2 out of a hotel room and out into a hotel garden during a light rain speinkling, say while sharing food during a Con, really couldn't be easier.

The Muvo 2 supports Wireless Link, which means that two Muvo 2 speakers can be paired together wirelessly and play the same source back with the host speaker being the left channel and the other speaker being the right channel. I didn't have two Muvo 2s on hand, so I couldn't test this. Still, it's probably more useful than I initially thought, especially if multiple people in the same household own Muvo 2s.

Another aspect that makes the Muvo 2 good for gaming and other entertainment is that is has proper Left/Right front orientation. The drivers are still somewhat indirect, but with stereo imaging, there is an obvious front to point at the listener. The speaker has two smart rubber feet on the bottom, but its angular nature makes it easy to use in different positions.

The Muvo 2 has a lanyard anchor but does not come with one. It does come with a micro USB cable and some documentation. Aside from the Metallic Blue one reviewed here, the Muvo 2 also comes in Metallic Gray, Metallic Red, and Black. All good choices. 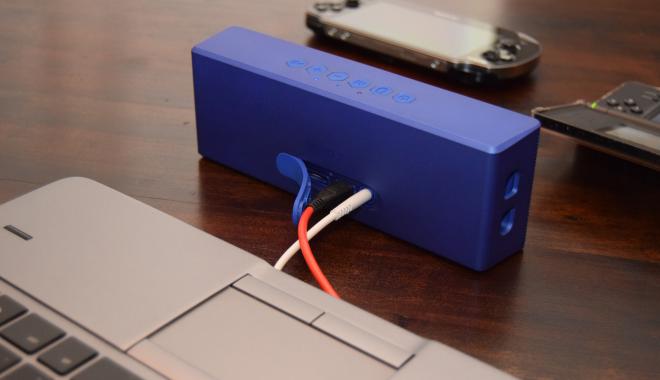 The Muvo 2 Bluetooth speaker is a great option for gaming on the go. The light weight, the water resistance, and the connectivity pair well with the stereo sound and nice looks. Some tweaks would make the Muvo 2 even more indispensable. While there are many Bluetooth speakers on the market, few manage what the Muvo 2 can manage.