Xbox One disc version reviewed on a standard Xbox One. Review copy was provided by the publisher.

'Dishonored 2' is set fifteen years after the events of the first game. Emily Kaldwin has reigned as Empress under the vigilant eye of her father Corvo, since reinstated as Lord Protector following his betrayal at the hands of first the Spymaster's conspiracy and then the loyalist's own conspiracy. The Empire of the Isles, made up of four islands off the coast of the Pandyssian continent, has been enjoying peace for most of Emily's reign and has also staved off the rat plague. However, the duke of the southernmost isle of Serkonos has been slowly building a scheme to depose Emily and dispose of both her and Corvo, and at the beginning of the game, arrives in the capital city of Gristol to do just that. 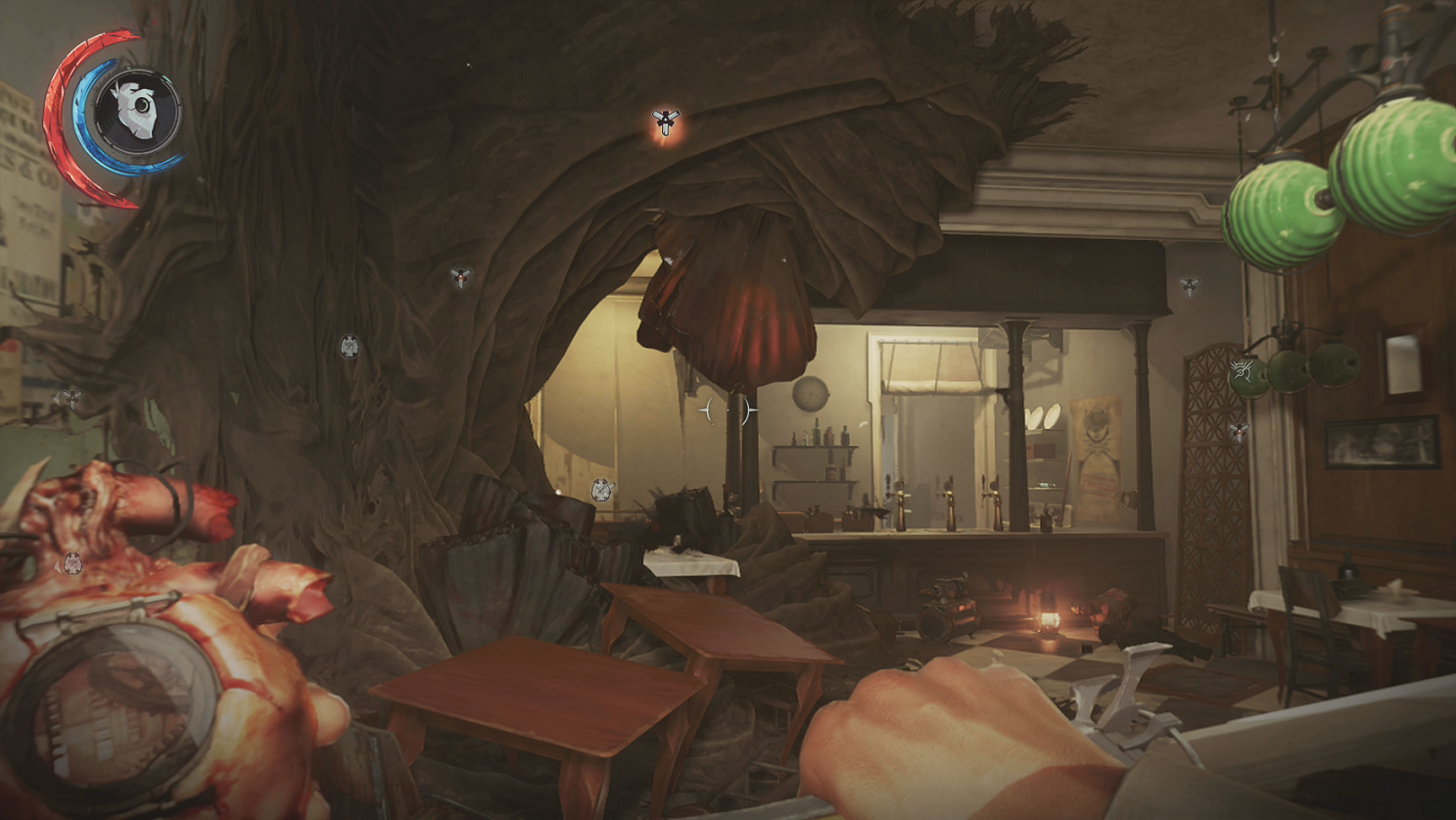 The campaign let me choose to play as either Corvo or Emily, a decision that cannot be changed later, as the non-chosen character becomes supernaturally indisposed for the rest of the playthrough. For my first run I chose Corvo and decided to do a stealth/magical/high chaos run, which was my favorite way to play 'Dishonored'. Except for the selection of magical powers, playing as either hero is very similar. Players who want a higher degree of challenge or are gunning for certain achievements can choose to forego the Outsider's mark at the beginning of the game, which means no magical powers are available at all, including level one Blink. Once I got the paperwork out of the way, Corvo and I began our business of quiet murder. 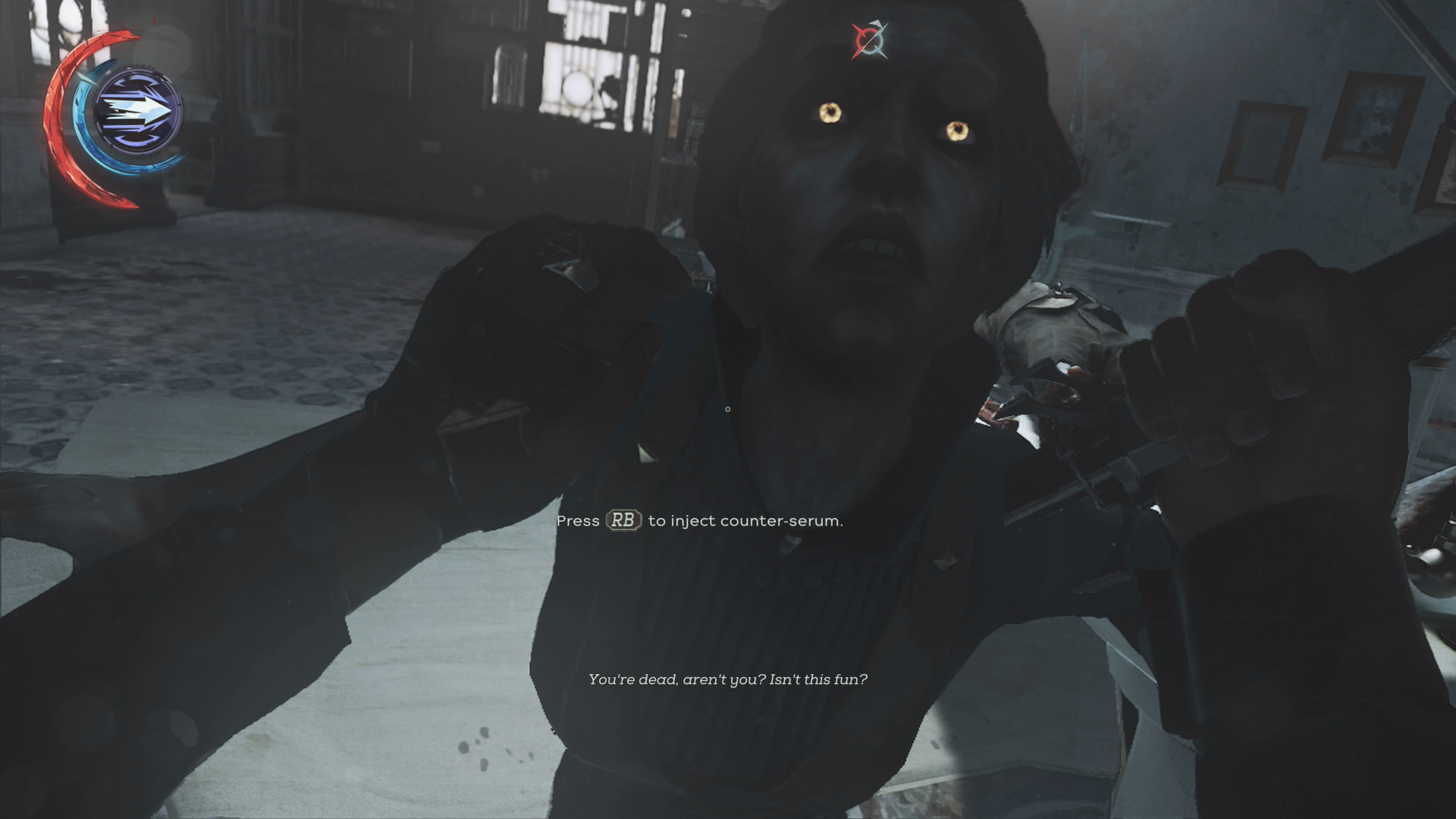 Even the first mission impressed me. These are typically reserved as slower, quasi-tutorials during a game's campaign, but in 'Dishonored 2' it's a trial by fire. Enemies are smarter, tougher, and more numerous. They can't be fooled by wall peeking or elevation, and have incredible peripheral and long distance vision. They notice things like doors being opened or objects out of place, or when a guard goes missing from their patrol route - an AI not unlike the critter from 'Alien: Isolation' who, as stealth titles go, was difficult to fool. Thankfully, Arkane saw fit to include quicksave/quickload mechanics on the console versions, making a stealth run less painful. I screwed up a lot, especially in the early missions where I expected stealth to be a breeze.

It's not just the smarter enemies and overall higher level of difficulty that make 'Dishonored 2' so entertaining to play, it's the level design. Each mission is an open world of its own. Sewers, basements, rooftops, and alleyways have all been carefully included and spread around the maps for enterprising players to exploit. On the second mission, instead of trying to get through the heavily guarded front door of a sanitarium, I took the scenic route by skirting along the outer wall to the rear dock area. It was more lightly patrolled and wasn't even locked - they were just asking for me to come in and burgle the place and kill everyone. Other entryways can be reached through magic, like possessing rats and scuttling through tiny little vents (not the massive and overdone air vents in 'Deus Ex', where technology has allowed for bionic armor and retractable tesla knuckles but apparently not efficient central heating). This school of map design is not uncommon in stealth titles, but 'Dishonored 2' takes it to an artistic extreme, building on the successes of the first game. Every building is essentially a block of Swiss cheese, and each hole can be used for dramatic entrances and escapes. Just as importantly, these nooks and crannies have been laced with lore of all kinds. Notes, graffiti, conversations, suspicious corpses, and more await explorers, all steeped in the lowlife steampunk pomp of the Isles. 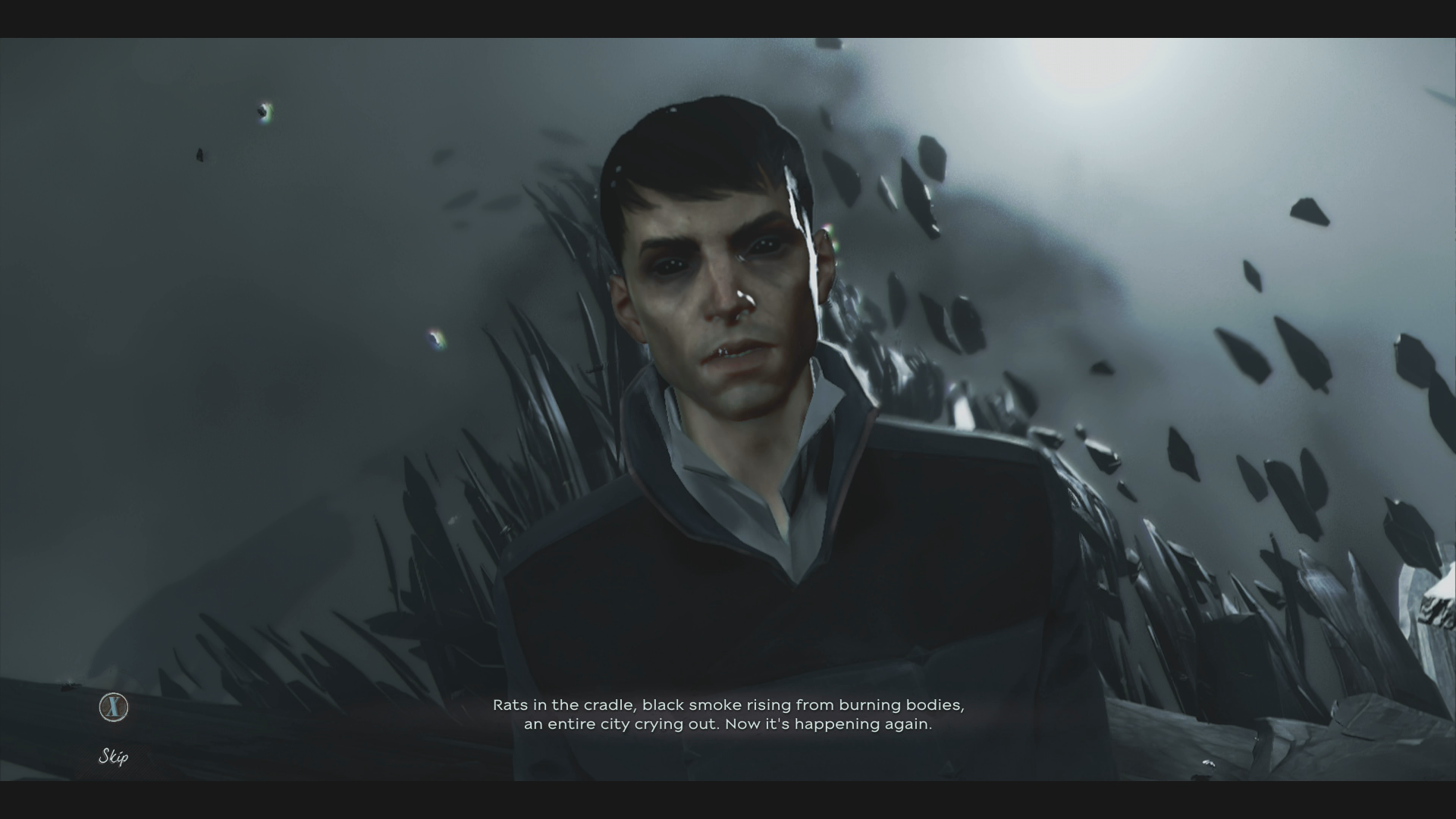 Corvo has more or less the same set of Outsider powers he did in the first game, with a few new selections like bone charm crafting and the addition of small skill trees. Daud's ability to stop time while Blinking can be purchased with runes, for instance. Emily, on the other hand, has a whole new set of outlandish, dramatically awesome powers. Her Far Reach is kind of like Blink mixed with Daud's Pull, able to translocate both her and enemies alike. Domino links the fates of several opponents, so that something that happens to one of them happens to all of them. Linking two guards and then shooting one with a sleep dart makes them both pass out. Lopping off the head of one kills both, and so on, up to four targets at a time for very efficient room clearing. She can create a double of herself with Doppelganger to distract guards, and with upgrades it can fight and even kill guards on Emily's behalf. Doppelganger, Domino, and her other powers can all be used in tandem in fiendishly clever combos, setting off chain reactions of destruction. Because of this, playing as Emily is quite a bit easier, further justifying the increased guard AI.

I'll discuss the storyline only briefly. It isn't terribly different from the first game; many of the same characters and elements have been reused. It's about betrayal, dishonesty, corruption, family, and player choice. Frequently killing people leads to a darker storyline, more venomous dialogue from the player character, and plenty of bloodflies, the giant mosquitos that have replaced the rat plague. Using a softer touch is more difficult but has its own rewards. Chaos is handled differently per dispatched enemy - the more evil the character, the less chaos is generated by killing them. I could use the Heart to determine if an enemy was worth killing or not, although I tend to refrain from harming civilians when possible. As before, almost every person can be killed or spared at the player's discretion, even main characters, and the game makes it clear that mercy is not always the same as forgiveness. 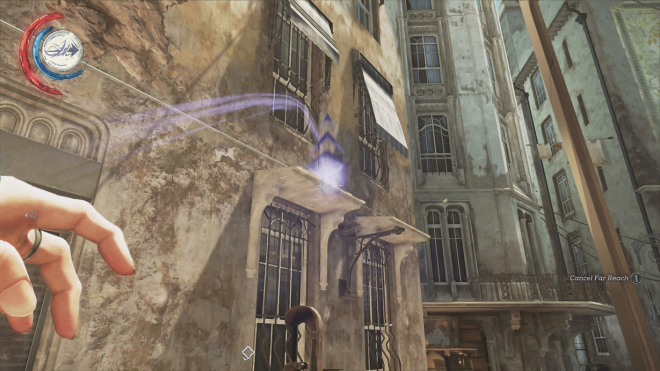 'Dishonored 2' has amazing art design, trading heavily on the dystopian steampunk theme that worked so well for its predecessor. The game takes place in the southern city of Karnaca, quite different from gray, sad Dunwall. It's brighter, sunnier, more exotic but still has a sprawling, seedy underbelly just waiting to swallow up the entire city. The characters look sharper than ever and still have a bit of the distinct grotesque style. There are a few instances where the framerate has issues, but these are typically limited to cutscenes and not actual gameplay. 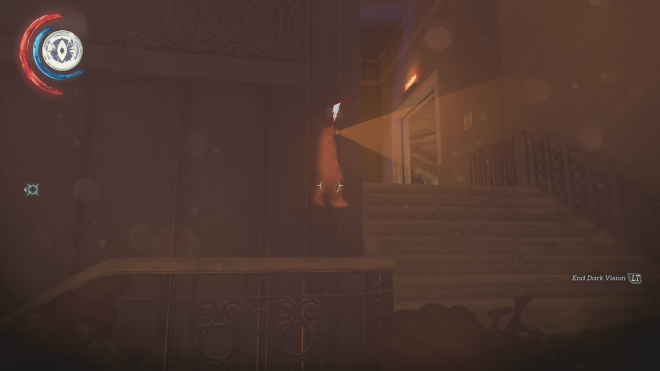 The Victorian soundtrack and sound effects are better than ever, mixed with the occasional nautical cues that permeate the Isles. All returning characters have been recast with different actors. With the exception of the Outsider, who is now less intimidating and judgmental, these actors do a good job. Corvo having a voice takes some getting used to, but his actor (Stephen Russell, who played Garrett in the 'Thief' series until the most recent release) gives him an old, gruff tone that seems to fit.

'Dishonored 2's dual protagonist system and its collection of stealth, pacifism, and magic allow for several different ways to play. Dialogue does change over time depending on the chaos level, but otherwise Emily and her father have many of the same lines. The mix of powers and thoughtful level design permit many opportunities for emergent gameplay and experimentation. 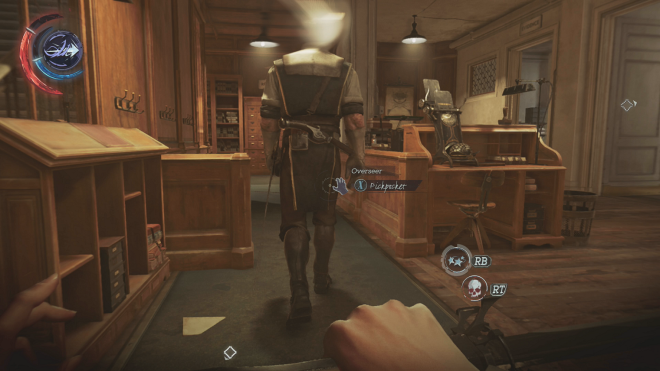 Like before, 'Dishonored 2' isn't just a great story. It's actually the same story, but hasn't lost any luster in the retelling. It has some of the best stealth we've seen this generation, buffeted by empowering, extraordinary powers, peerless level design, and intriguing characters. Arkane did the same thing this time around, only better.