The Game Itself
4 Stars
The Video: Sizing Up the Picture
2.5 Stars
The Audio: Rating the Sound
4.5 Stars
Replay Factor
3.5 Stars
Bottom Line
Recommended

When a group of students perform a strange ritual, they all find themselves whisked away to a school trapped in an alternate dimension filled with the spirits of the dead and must seek an exit or die trying. In this port of the 2011 cult classic horror title 'Corpse Party', players will control each of the students in turn and solve puzzles, avoid enemies, and hunt for the truth in order to unravel the mystery behind Heavenly Host Elementary. This port features 4 all new bonus chapters, shedding light on many of the game's characters, as well as high-res artwork, touchscreen inventory management, and more.

When it first released on PSP back in 2011, 'Corpse Party' was something of an obsession of mine. I was on a major Japanese horror movie kick at the time, and along came a humble little game that seemed so perfectly suited to my tastes that I couldn't help but fall in love with it almost instantly. At the time, I'd not been particularly scared by a horror game since 'Fatal Frame 2', but 'Corpse Party' terrified me, giving me more than a few restless nights. Unfortunately, as seems to be the fate of most great horror franchises, 'Corpse Party' received sequels that, at best, felt like unnecessary footnotes, and at worst, destroyed much of what made the first game so special. With 'Blood Drive' on the Vita, I had such an awful time playing it and hated the storyline so much that it made me retroactively like the previous games a little bit less. That's why I had such a pleasant time with this port, which served as an excellent reminder of why I loved 'Corpse Party' to begin with. 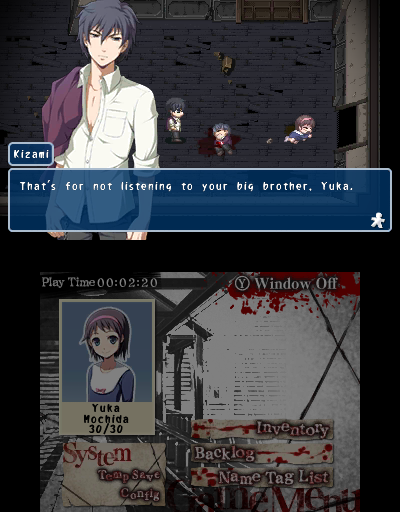 A group of students, along with their teacher, perform a ritual called Sachiko Ever After to cheer up a classmate who is about to transfer to another school, as it will supposedly make their friendships last for eternity. Something goes wrong and as soon as the ritual is performed, a massive earthquake swallows them up and transports them to Heavenly Host Elementary, a school that has been long since demolished due to a string of grisly murders, yet somehow exists in an alternate dimension. The students must find each other, unravel the mysteries of the school, and seek an exit at all cost.

I really love how, after a fairly brief introduction, 'Corpse Party' throws players into everything headfirst without much explanation. Players are left feeling as disoriented as the characters themselves, seemingly trapped in a place where nothing makes sense and everything is out to kill them. The game reliably goes through just about every Japanese horror cliché it can, but does so with such strong execution that, even if it doesn't feel terribly fresh, it's always tense and unsettling. The developers have a clear understanding of how to keep things scary, and never show or explain too much. By keeping the characters and players unaware of the true nature of their situation for much of the game's runtime, there's an air of mystery that only makes things scarier.

Mechanically, 'Corpse Party' is essentially just a sprite based adventure game, seeing players jump from character to character to try and get them all to safety. There's no combat of any sorts, largely relegating encounters with enemies to chase scenes or tasking players with hiding away, so the majority of the game focuses on puzzle solving. Thankfully, the puzzles never really fall into adventure game non-logic, and everything is simple enough to figure out without much frustration, but difficult enough that they require a fair bit of thought to get right. Unfortunately, due to the game having multiple endings, it can often be tricky to discover what exactly triggers each ending or failstate, but nothing's ever terribly obtuse, and there's a ton of satisfaction to be gained from seeking out each path the story can take. I almost wish the game had solely focused on puzzle solving, as the chase sequences either take practically zero effort or end up feeling frustrating and artificially challenging. Thankfully, these scenes are brief, and don't hamper the overall game nearly as much as they could have. 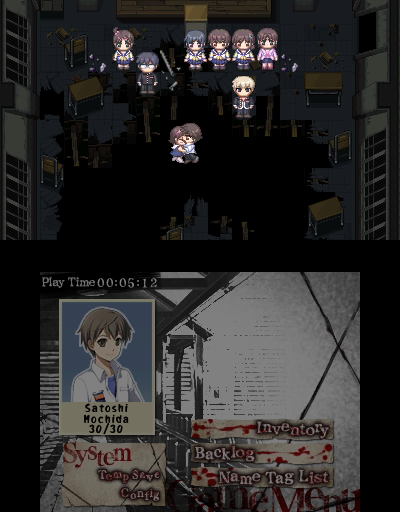 The 3DS version is largely identical to the PSP game released back in 2011, but it adds in a few new bells and whistles that make it a more enjoyable experience overall. Artwork has been slightly touched up, though it's not a terribly noticeable improvement. Inventory management is now relegated to the touchscreen, which makes things far snappier and more convenient, and there are four exclusive bonus chapters. These chapters aren't terribly lengthy, and bafflingly lack the voice acting of the main story, but they flesh out some of the game's less developed characters rather nicely, and they're worth experiencing for series fans, even if they don't feel terribly necessary. Strangely, a bonus chapter that was in the recent PC release is absent here, which is a particularly unfortunate omission given how widely acclaimed that chapter is, but otherwise, this is possibly the best version of 'Corpse Party' to dive into thus far. 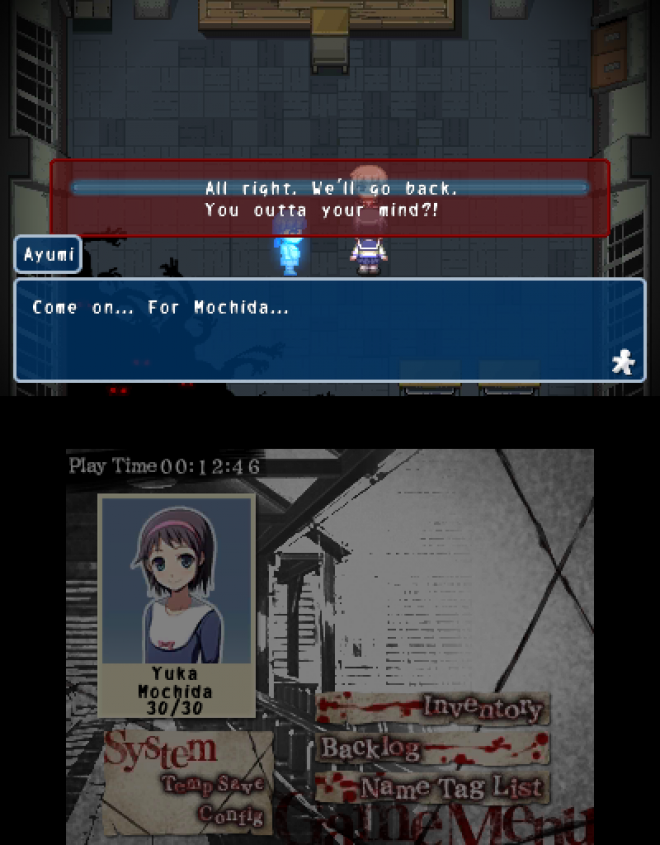 While the 3DS port boasts of having high-res artwork, it's really only a small step above the PSP version in this regard, and isn't terribly impressive to look at, save for some genuinely excellent art in the more graphic scenes of the game, which does a great job of making the game even scarier. Outside of that, the game's origins as an RPG Maker project shine through, with adequate at best spritework and largely dull environments. 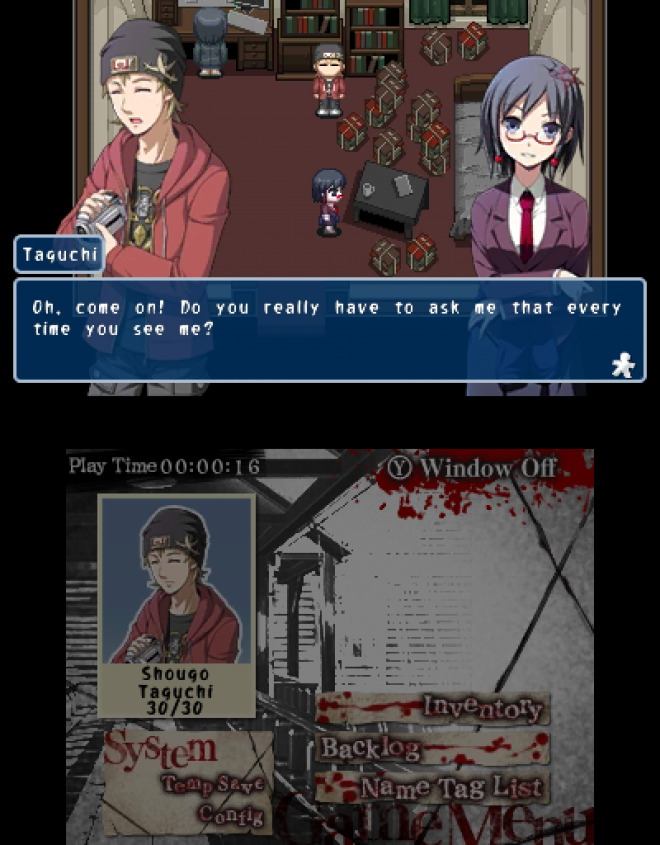 If 'Corpse Party' is largely unimpressive visually, it's more than made up for by the frankly excellent sound design that terrified me in places. It's one thing to be shown exactly what is going on, but Team GrisGris and 5pb understand just how important it is to not let the player see everything, and by relying largely on audio cues, an effectively spooky soundtrack, and terrific voicework, the game does a tremendous job of forcing the player to visualize its horrors themselves. It's a masterclass in how important sound design is to horror games. Unfortunately, there's no voice acting in any of the bonus chapters, which does dampen the mood somewhat, but otherwise, the audio here is terrific.

With 10 base chapters and 4 bonus chapters that are exclusive to this version of the game, there's a fair amount of content in here to begin with, but couple that with multiple endings and plenty of secrets to find, and 'Corpse Party' has enough content to easily double the playtime required to simply reach the ending. 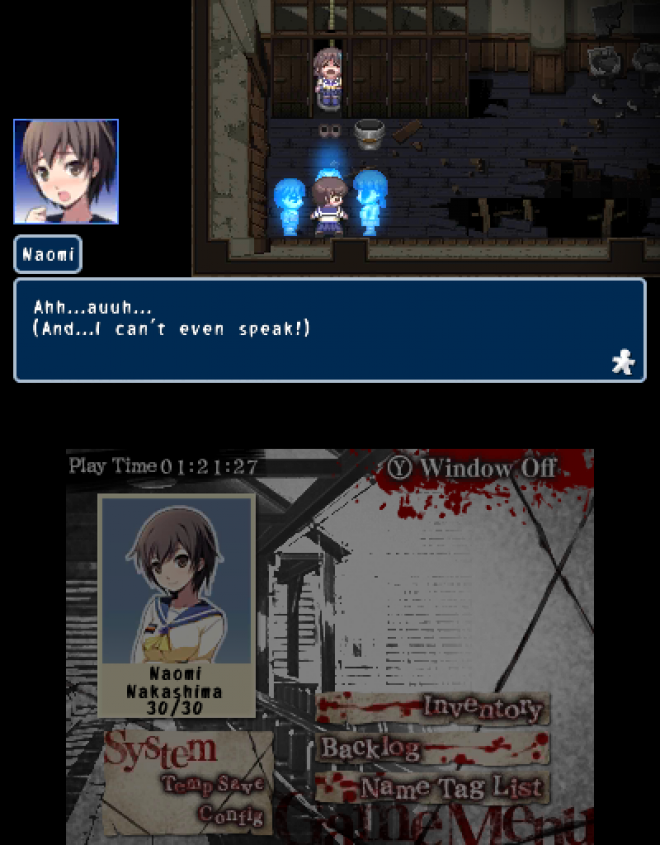 While it's a shame it's lacking the exclusive bonus chapter from the recently released PC version, this is otherwise the most content rich edition of a great horror game. The new content here is definitely nice, but it's the kind of side content that doesn't necessarily justify double dipping for those who own any of the other releases, but absolutely makes it a great entry point for anyone who hasn't yet delved into the horrors 'Corpse Party' has on offer. With a clear understanding of how to do a lot with very little, and just how to keep things scary, 'Corpse Party' still feels just as terrifying as it did five years ago, and is well worth checking out for any horror fan.