The Game Itself
2.5 Stars
The Video: Sizing Up the Picture
3.5 Stars
The Audio: Rating the Sound
3.5 Stars
Replay Factor
0.5 Stars
Bottom Line
Skip It

'The Assembly' reviewed using PS VR on a standard PS4. 'The Assembly' offers some different control schemes by way of the DualShock4, and this review utilized both extremes as noted.

Developed by nDreams and built using Unreal 4, 'The Assembly' is a VR-focused title that promises to explore both moral dilemmas and a massive, secret organization. It's not just VR at work here, but two different perspectives.

"Word that kill" is a line from the 'Metal Gear Solid V' title song that has stuck with me, as it happens to impart something interesting from that game's meager plot. And that sliver of an interesting notion is a good place to start with 'The Assembly.' The high concept of the game challenges players to unravel a sci-fi thriller from within the bowels of a secret "the ends justify the means" organization and headquarters, from which the game derives its name.

Naturally, the perspective of VR in its current incarnation is meant to heighten those conspiratorial aspects. 'The Assembly' rotates players between two perspectives. The first is a new and unwilling initiate who must undergo trials (room-sized puzzles of different types) in order to earn her unasked for place in the Assembly while the second playable character joined up long ago, but has decided to go rogue. 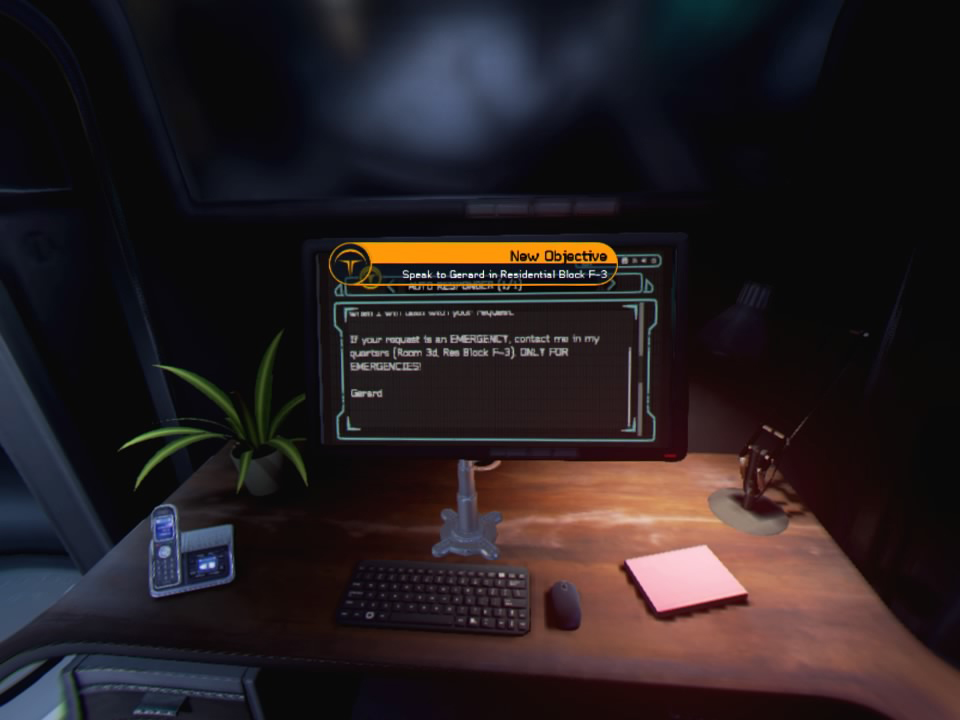 This is isn't a shooter, but a sci-fi yarn. With a center-stage initiate and a more worldly cog free-roaming behind the curtain, it could be said that the player is getting two different stories, or as I suspect was intended, that the full intrigue of the Assembly is revealed chapter by chapter.

Unfortunately, the high concept, which dabbles with the idea of doctors without ethical (or even budgetary) limits, amounts in terms of gameplay mainly into contrived puzzles. I'm not referring to the trials, which feel like candy after being stuffed with canned food, but the constant desk and terminal rifling "puzzles" of the rogue within a rogue org doctor. 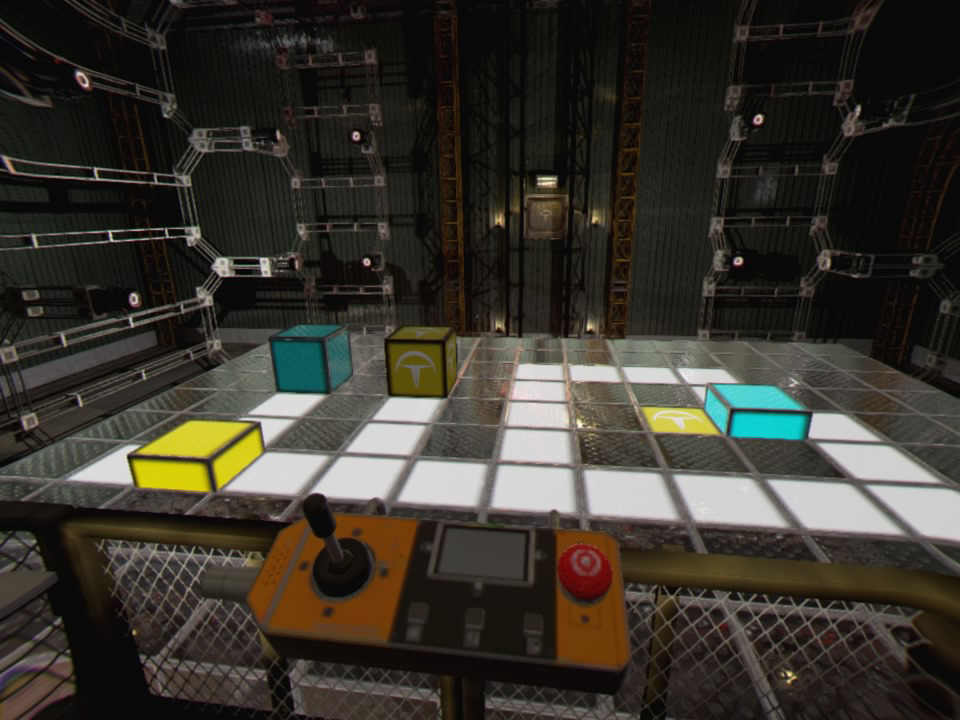 I'll attempt to explain without spoiling too much. At one point, I had collected some incriminating information via video and needed to either send it out via web or put it in a hard copy form. Instead of using one of many, many, terminals that I had used to get the info, I was summoned to another floor for a big task. Once there, on the new floor, I suddenly got a time reprieve on that big task (there's no real reasoning here), and again, the many terminals around were ignored as I decided that I needed a hard drive instead. Although there were likely hard drives in almost every room, it was explained that I needed one that was kept under strict control in Tech Maintenance (you know, because they don't want incriminating info going out). After attempting to talk the lone IT person into foregoing procedure and giving me a hard drive/flash drive right there in then, my task became distracting the IT person. As it happens, the various rooms that I had already gone through prior to talking to IT happened to contain such a distraction.

Creating the distraction required that I gather three ingredients, and mix them remotely. That in turn created a small fire inside one of the lab spaces. The extra heat overloaded the already taxed A/C, which meant that the IT person had go to the A/C unit for a manual reboot. With the lone IT person distracted, I waltzed into Tech Maintenance and picked up the hard drive. 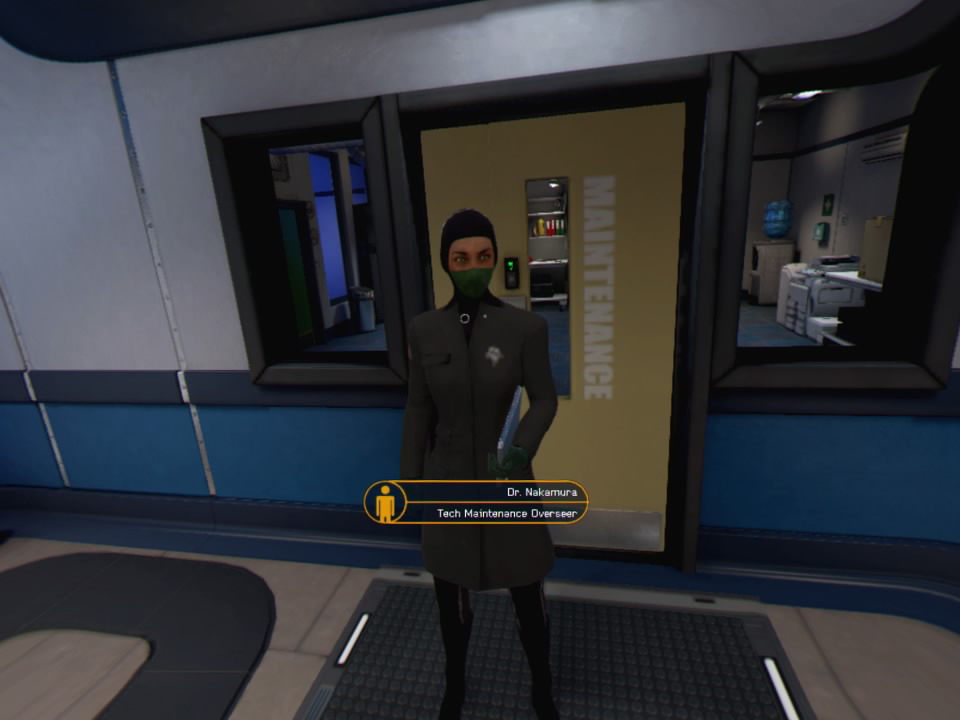 In case it isn't obvious, this little puzzle lacked for interesting elements. That I had already encountered all the pieces I needed prior to reaching Tech Maintenance really didn't help, but I feel like this entire episode just didn't work. The game had already established that this character needed to read every terminal and white board and check every drawer and table to be able to progress into the next lab or office, but even so, this just felt like unpolished filler that moved me further and further away from that promising high concept.

And that brings me to an even more important shortcoming. Because so much time and energy is spent rifling through empty rooms in order to find the next item needed to proceed, the game has an adventure game feel. But where a poorly designed adventure game can feel slow and boring, 'The Assembly' adds in fatiguing controls.

There were moments, mainly when playing the brief trials that are so infrequent when set against the rifling desk part of the game, when the VR aspects worked. A sense of wonder hovered nearby as I examined some massive puzzle, and though the puzzles were pretty straightforward, that sense of scale remained.

But sadly, the other part of the game, in which I typically had to poke around six or so empty rooms at a time made me dislike the VR aspects altogether. The game's standard controls had me pull down on the left trigger and point to teleport my character. I could look around using the PS VR headset, but I also needed the right stick to help with all of the turning around and around in the little rooms. 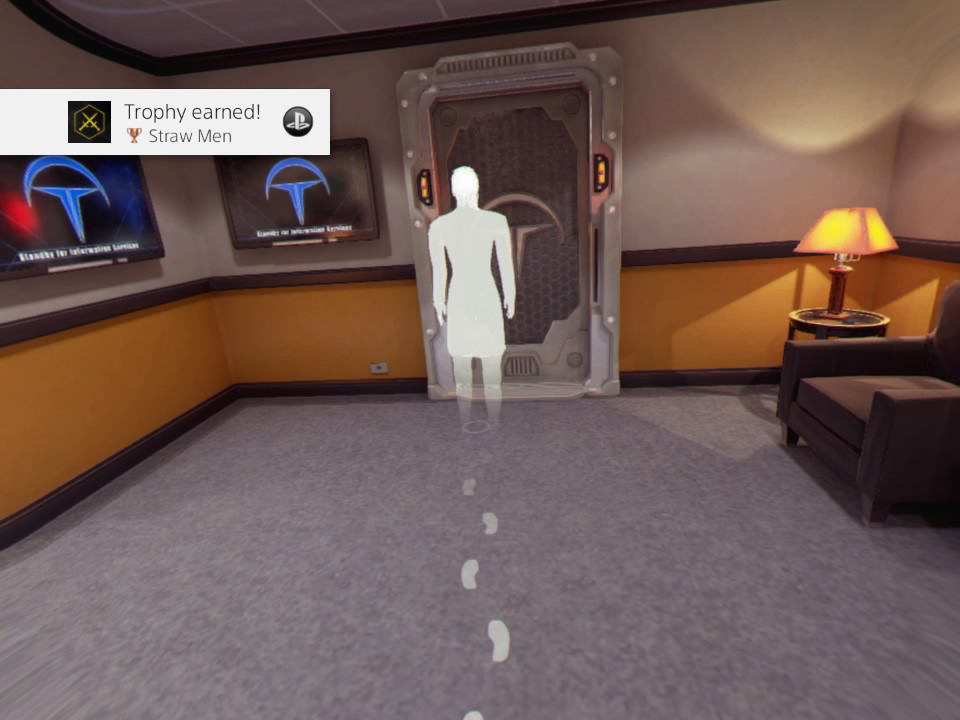 This default control scheme is ok, but progression is slow. After I had used it for a few chapters, I decided to try the Classic control scheme, which is basically a conventional dual-analog way of controlling the character. At first, I loved this. It felt natural, and I was able to move so much faster. Also though I still had to crane my neck down to search for quest items, I felt less likely to miss stuff. 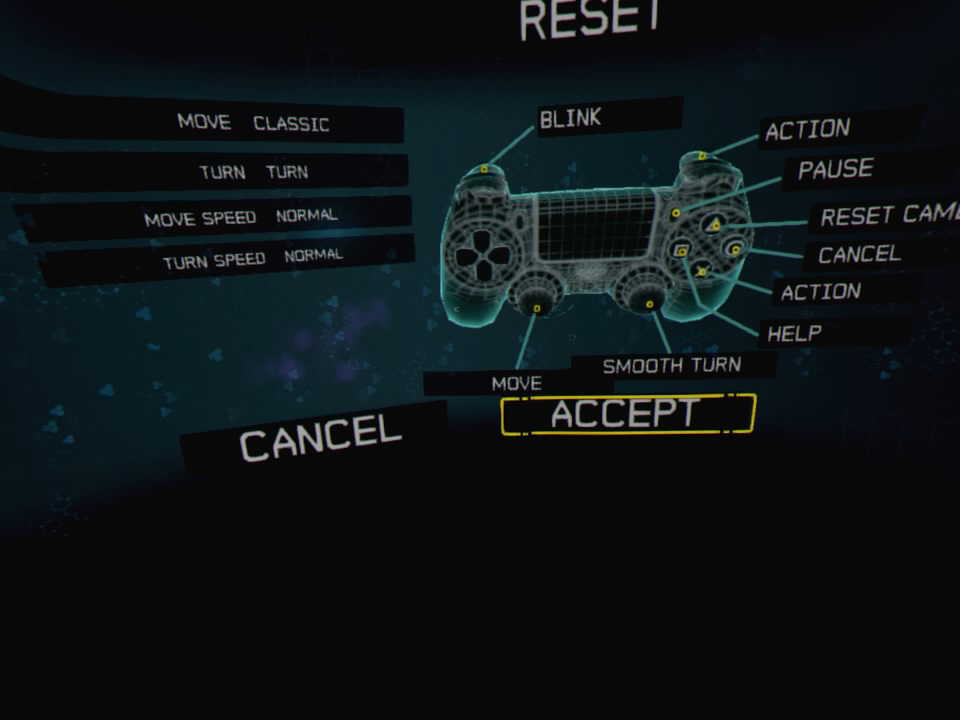 This great feeling of mobility did not last. I found that moving both sticks at the same time, FPS style, activated a hitherto unknown sensitivity. I powered on, but later I really regretted it. After having to quit for the day and spend some time recovering, I was forced to go back to the original control scheme.

'The Assembly' isn't a long game, but playing it for even two hours at a time is a real stretch. It's this last issue that crushes the game's value. Very early on, it felt like completing one chapter of desk-rifling was a tall task. With the puzzles often putting the cart before the horse, and never seeming to have more than one solution, I was left reading the petty emails of the other doctors/workers. It's not a great fit for VR. 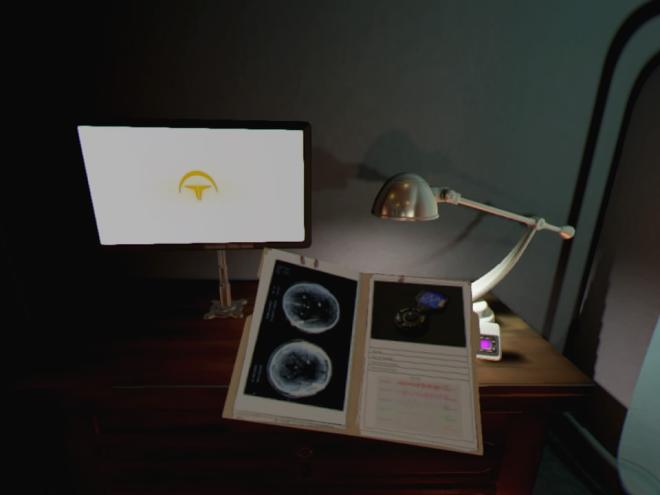 The art design of 'The Assembly' does a decent job of balancing out a potential 'Dr. No' lair with a more grounded workplace. The flip side of that is that there is very little to be impressed by in the breakrooms and washrooms, etc. Overall, another polish pass was needed to fix some weaker textures (which get very close is first-person VR) and simple-looking puzzle objects. Based off of screens from the PC version, the lack of visual polish might also be part of the porting process. 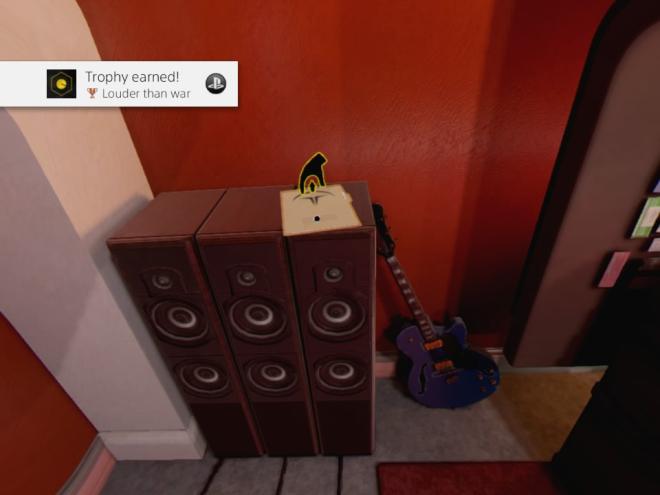 I'm going to call this a minimalist design. It's a thriller type story and setting, but the music is not that. The voice-acting probably does the best with the script that it can. 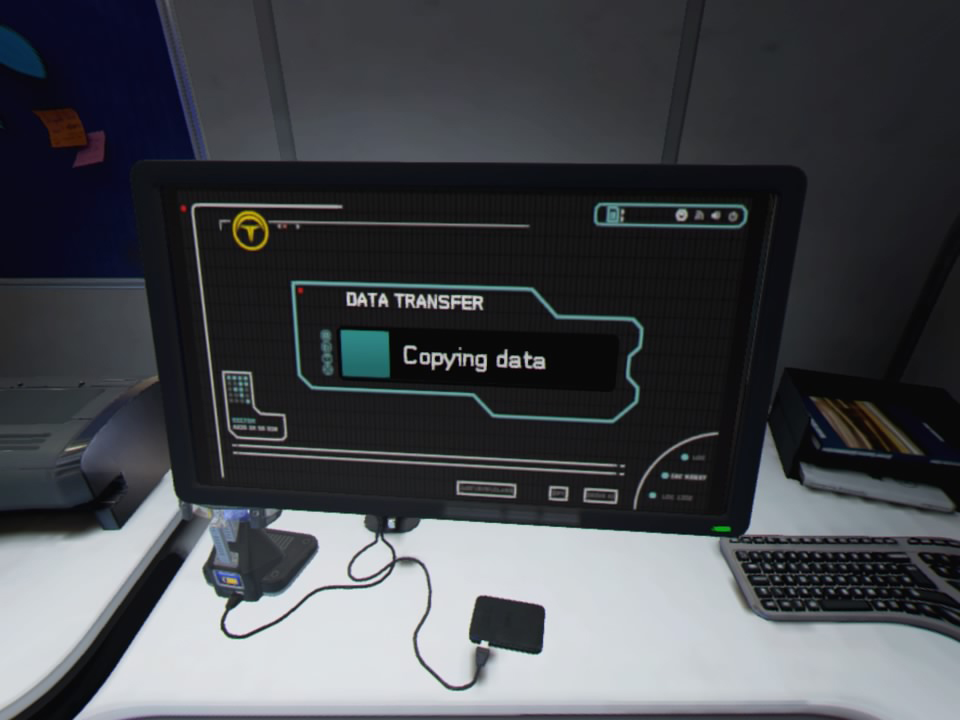 On some level, I feel like the sense of being trapped in a drab workplace full of Type A personalities with poor social skills infected the game. That isn't something to revisit unless really necessary. 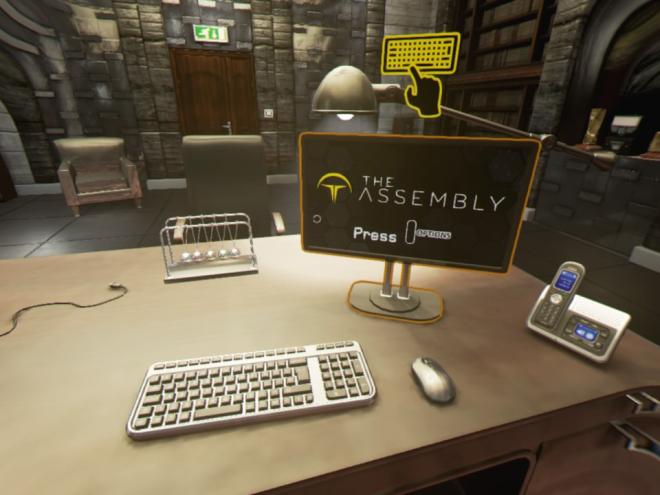 I went looking for Michael Crichton in 'The Assembly,' but I got stuck on the lowlights. As with many ambitious projects, there is some good stock here. As VR advances, another take 'The Assembly' could realize the promise. What's here, however, just isn't thrilling.