The Game Itself
4.5 Stars
The Video: Sizing Up the Picture
3.5 Stars
The Audio: Rating the Sound
3.5 Stars
Replay Factor
3 Stars
Bottom Line
Recommended

'Hide and Shriek' is a PC title from Norwegian studio Funcom, which has also worked on things like 'Age of Conan' and the 'Dreamfall' series.

'Hide and Shriek' is a 1v1 game set in a school. There are four classrooms and a hallway in between, or at least a part of a hallway. The map is very small but there are lots of nooks and crannies in each room, and in these hidey holes can be found all manner of orbs and skipping stones. The skipping stones are runes, each colored with a particular sigil, and the sigils provide magic powers on their own or when combined with other runes. Orbs are the equivalent of a soccer or basketball and can be carried to frequently teleporting altars for big point boosts. Each match is 10 minutes and the goal is to either scare the other player 3 times in a row or hit them with enough spells, traps, and orbs to win through sheer point value. Oh, and the kicker: both players are invisible under normal circumstances, hence the game's name. 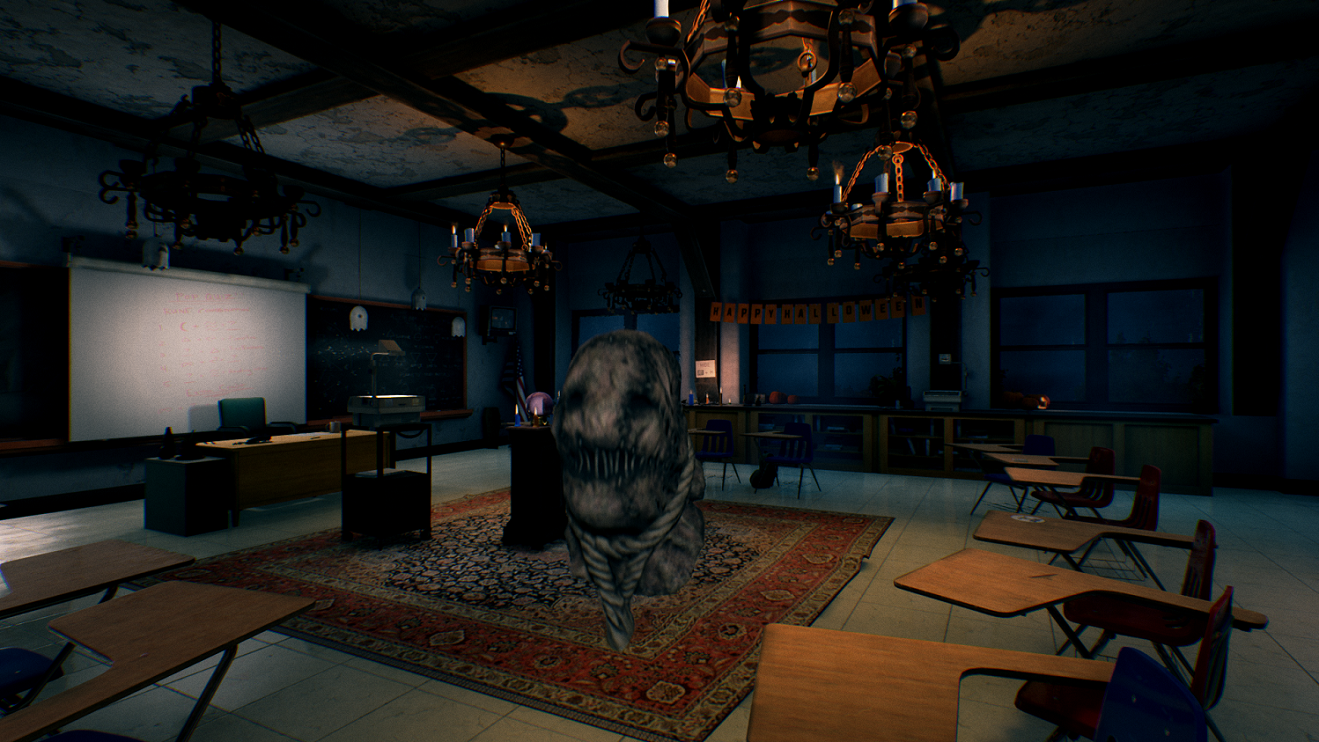 I played 'Hide and Shriek' mostly with one gaming buddy, Brendan, in different physical locations and with voice communications so we could continually heckle each other. There is a large pool of rune abilities, especially when combinations are taken into account, so the repertoire of traps is daunting. He enjoyed dropping floor traps in between rooms where I was likely to walk, like vortexes that would pull me into an alternate dimension, or gusts of wind that would knock me down and scatter whatever orb I was carrying (damn him). He could turn out the lights on me with the right combo, or hide a chime trap that would continually ring as I walked, alerting him to my location for an easy scare. 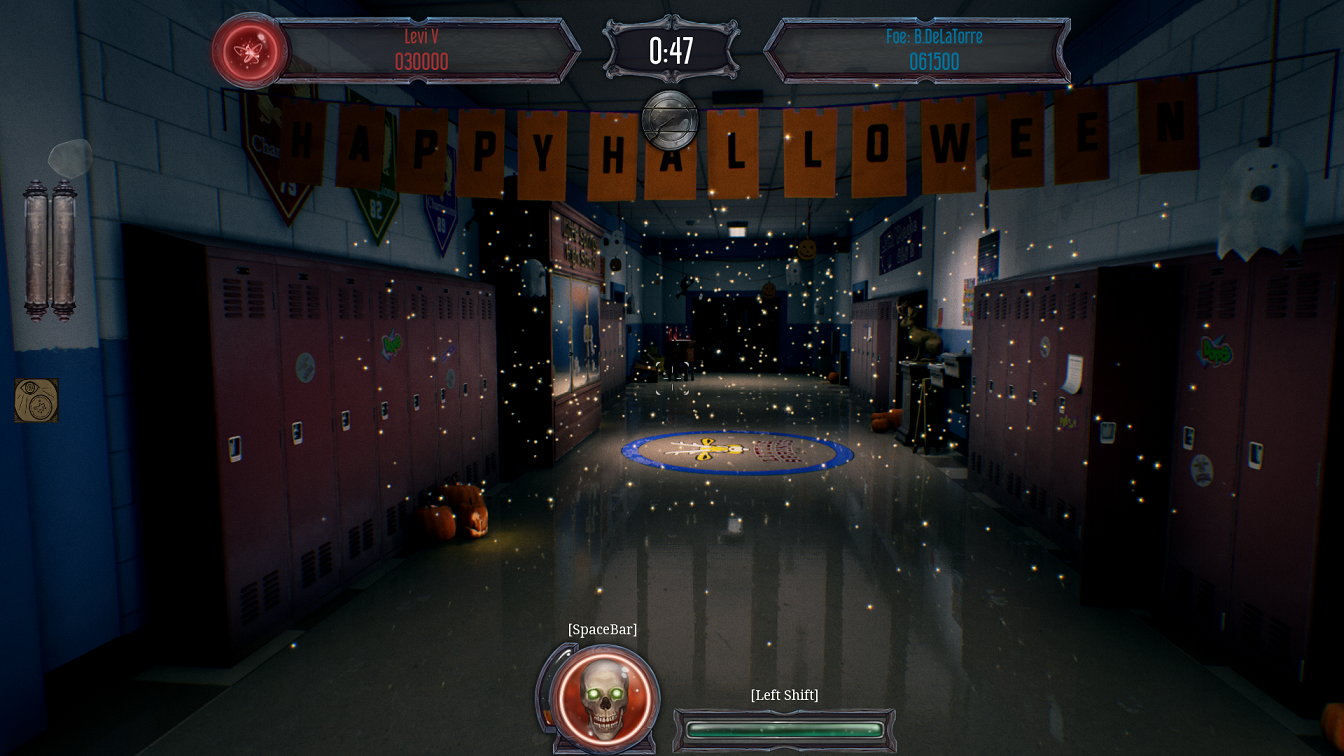 The runes I received were more devious and played on Brendan's expectations. I could often lock doors, so I hid his blue orbs behind a glass cupboard and locked it. He can see the 10,000 points right in front of his face, but he can't open the door to get at it unless he crafts a dispel rune. I could also fabricate a fake orb out of thin air and put a magic bomb on it, then hide the little delight in a drawer (Brendan was too smart to go for orbs left on the floor, but he got blown up by drawer orbs every time). I left clouds of pixie dust in the hallway, then waited for him to appear and scared him. He won the first few games by spamming orbs, but after I earned better runes I could make him have trust issues every time he approached one. 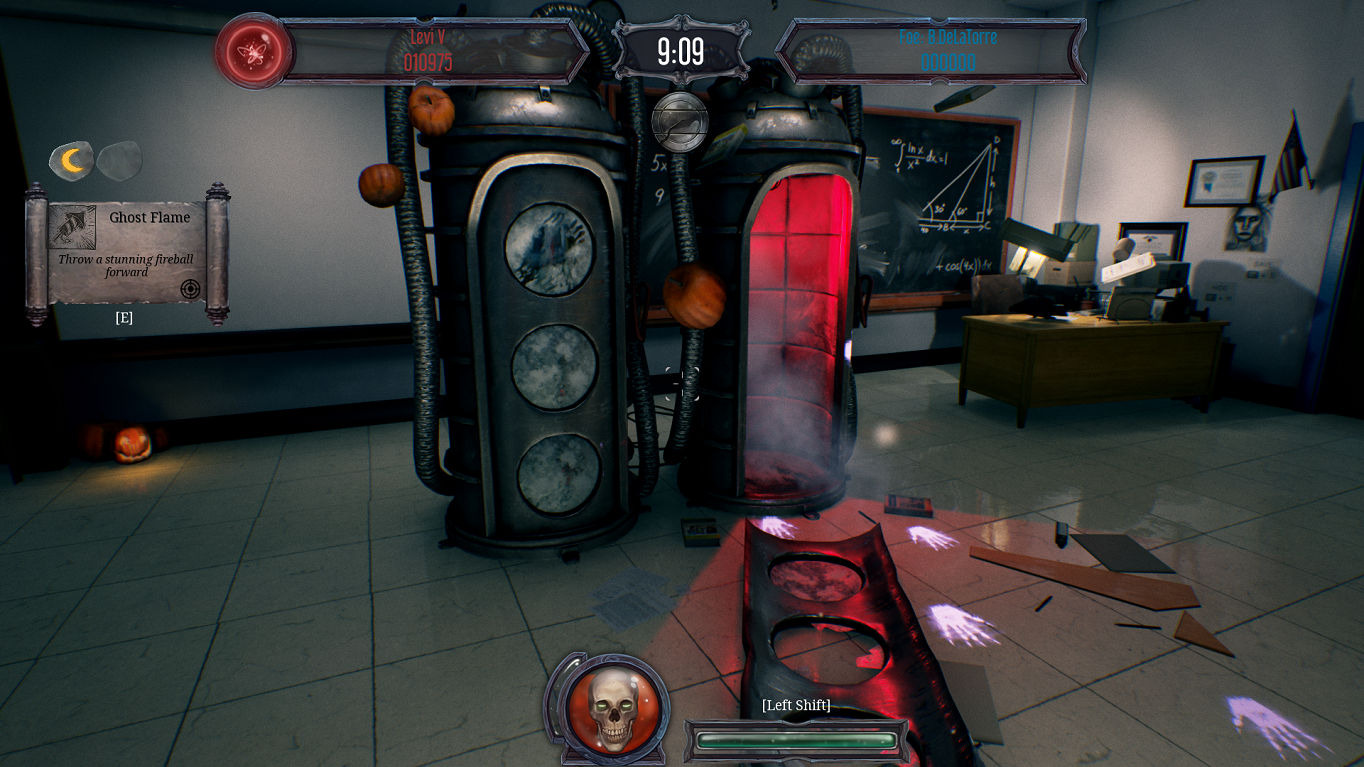 'Hide and Shriek' is a tiny game but it is almost perfectly developed. The traps and abilities are devilishly clever and the level design is flawless. Every strategy has a counter, like an arms race of magical weapons. Camping an altar to scare approaching opponents is a viable strategy for a time, but the altar teleports often enough to force both players to keep moving. Dunking an orb earns a lot of points but carrying one is extremely risky, as they do not turn invisible along with the player. Nearly every action the player executes gives away their location, forcing them to be quick and sly or risk being nailed with a fireball. 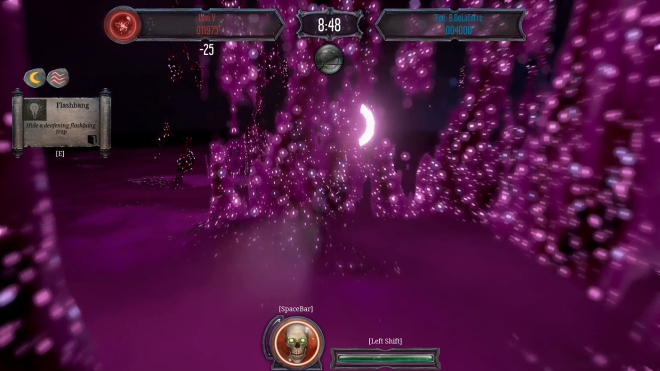 There aren't a lot of levels, models, or other assets on display here, but what it has looks very good. The classrooms are familiar and a little bit spooky, with floating backpacks and other decorations that high school students probably wouldn't be able to come up with sans magic. The traps are more of the jump scare variety, and they mix well with the "you got me" style of competitiveness. 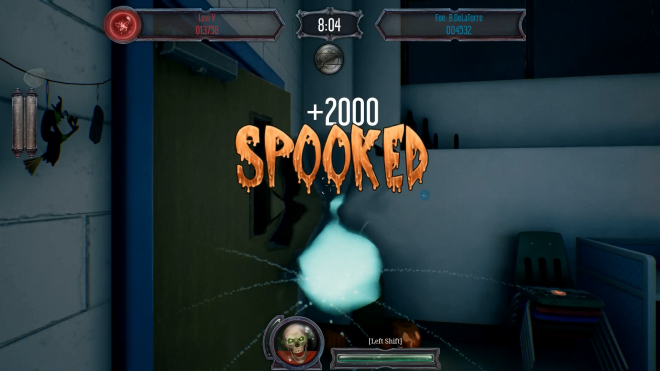 Audio is sparse but purposefully loud and jarring to pull surprised laughs out of tricksters. They are standard Halloween effects like cryptic laughter, creaky doors, and suspicious bells. Music is rare and voice acting is limited to screams.

'Hide and Shriek' is only experienced in one format: 10-minute 1v1 matches in the same school map and the same victory objectives. It's a one-trick pony but a very well-trained pony at that. With the right friend, this is a game you could potentially play for many hours beyond what the $6 ticket price would normally suggest (and at the time of this writing, it's even on sale). New runes unlock as each player earns points, and every game has a random assortment of them for a bit of variety. 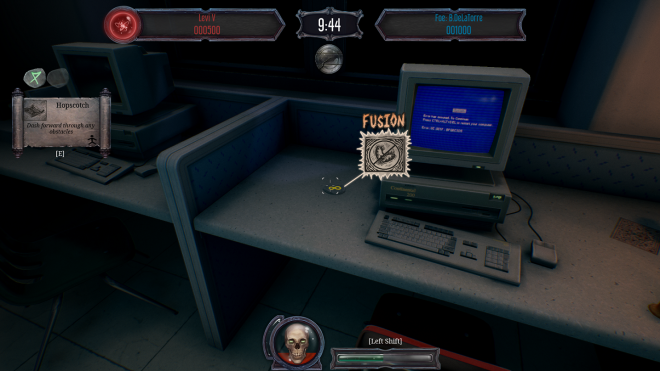 At such a low price and with such a capacity for emergent gameplay it is hard to not recommend 'Hide and Shriek'. The fun is situational, though, and is best played with a friend, with comms, and with only a few matches at a time so as to not dilute its magic. Under these circumstances it's a riot.