The Game Itself
3.5 Stars
The Video: Sizing Up the Picture
3.5 Stars
The Audio: Rating the Sound
3 Stars
Replay Factor
4 Stars
Bottom Line
Recommended

Koei's 'Nobunaga's Ambition' strategy game series began in 1983, and has seen over 25 different releases on a wide array of platforms. The latest entry in the retelling of Japan's feudal history is 'Nobunaga's Ambition: Sphere of Influence - Ascension,' an enhanced version of last year's 'Sphere of Influence.' It brings a number of new features to the series including the ability to play as an officer and new combat scenarios that take place in castles.

Considering Koei Tecmo's love of yearly installments, I wasn't expecting much in terms of new content in 'Nobunaga's Ambition: Sphere of Influence - Ascension.' I figured it would simply be more of the same strategy gameplay that fans have come to expect from the series, but I was pleasantly surprised once I sat down to start 'Ascension.' While the game does feature all of the same content as 'Sphere of Influence,' it has enough new ideas to fundamentally change how the campaign is structured.

The big change is that players no longer take control of a clan as a whole. Instead, I got to choose what officer I wanted to be and played as them. These officers range from lowly-ranked retainers (who can only build infrastructures in their small domain), and go all the way up the chain to lords (who get to boss around their own retainers) and the clan leader, the Daimyo. Picking someone at the bottom of the totem pole allows 'Ascension' to tell an inspiring story of triumph as a lowly soldier making it all the way to the top. This is awesome, as it allowed me to mirror the real life story of Toyotomi Hideyoshi, who went from having no family name to becoming Japan's second unifier. 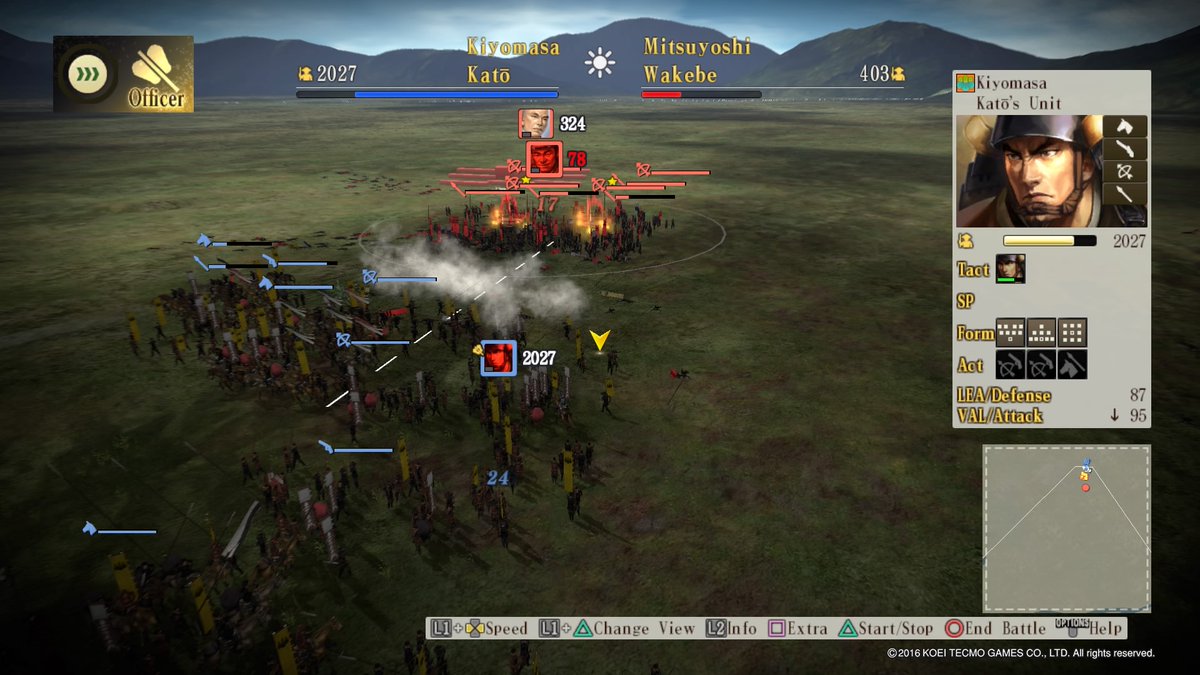 While starting from a lower position makes each campaign last longer, due to significant progress slowing to a snail's pace for the first few months of gameplay, it also makes 'Nobunaga's Ambition' more accessible than ever. By limiting what the player can do, and by giving them simple goals such as collecting lumber and iron, it gives new players a much needed sense of direction. This is important since 'Ascension' is a very complicated strategy game, and its text-heavy tutorial can seem overwhelming since it packs an incredible amount of information into a 30-minute span.

The best part about these additions is that they are completely optional. If a player doesn't want to deal with rising up the ranks, they can simply select a clan's Daimyo, and then have complete control. That's perfect for long-time fans that don't want to deal with change, or just want all the tools at their disposal from the get-go since life as a retainer can be pretty slow moving. 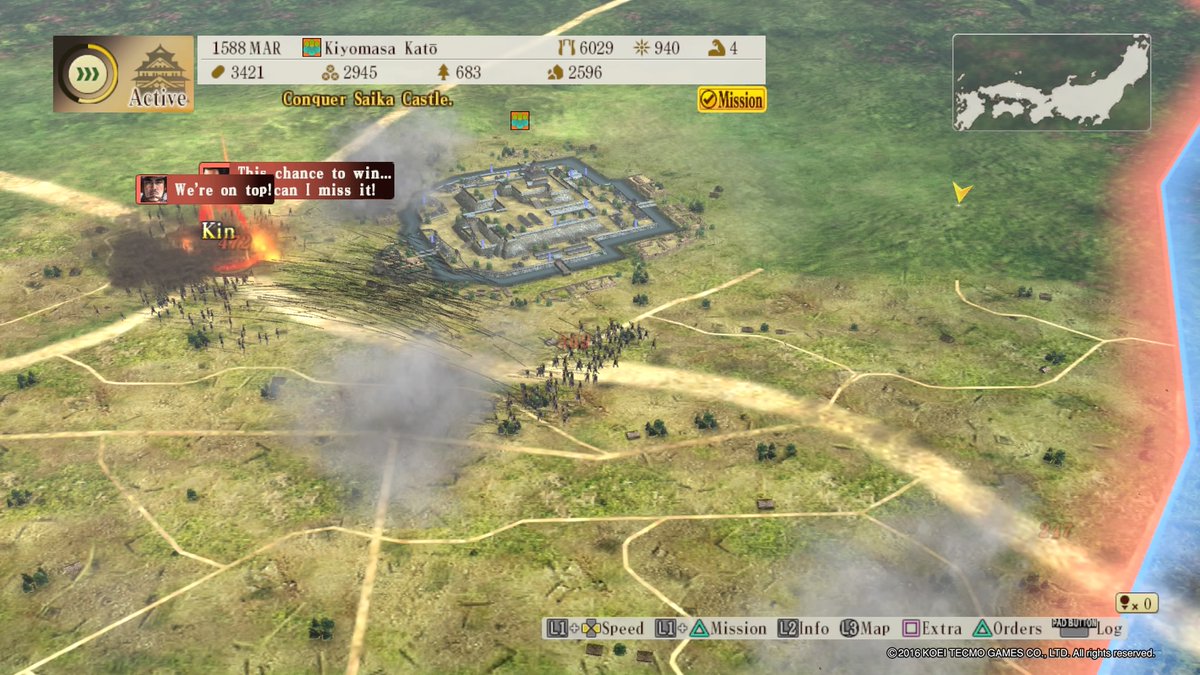 The other big additions to 'Ascension' is how Koei Tecmo has freshened up the game's rather simplistic combat. Instead of taking place on open fields, these battles can now take place within castles and on the ocean. The castle combat is particularly interesting since it adds an extra layer of strategy to the proceedings, as the end goal is to bring down a building called a tenshu. Oftentimes, I was able to sneak my way to where the tenshu was and destroy it while the enemy army was distracted by other groups of soldiers. It's so much more interesting than the standard battles.

Since the castle sieges are such a cool addition, it's a shame that they end up falling a bit flat since battles begin to be automatically simulated once the player is higher up the chain of command. While the player can choose to participate if they wish, it doesn't make much sense to command over every battle as several happen on each turn. This meant that I rarely got to see these smart additions to the gameplay since it's much quicker to just let my delegates handle it. I'm not sure how Koei Tecmo can really fix this issue, but it definitely is a bummer that they put a lot of work into something that a lot of players will just sim past. 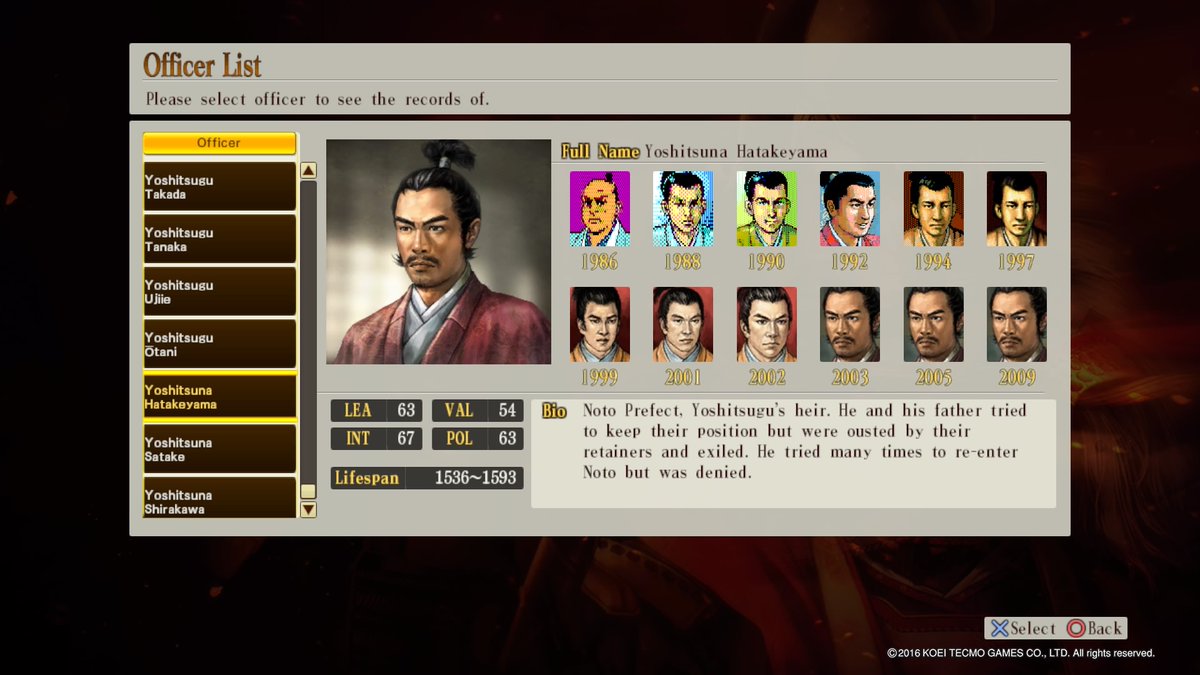 While I really am impressed with a lot of the changes that 'Nobunaga's Ambition' offered, it still suffers from a lot of flaws that were apparent in 'Sphere of Influence.' Koei Tecmo attempted to fix some of these issues, such as the clunkiness of the UI, but it's still awkward to navigate despite the game's best attempts to streamline things (although the ability to pause the action at any time keeps this from becoming too frustrating). Plus, the addition of being able to play as a low-ranking soldier has made the game's long campaigns even lengthier. A single campaign often took me over six hours, and while I find the gameplay enjoyable, the task of taking over castle after castle starts to get repetitive. I really wish that 'Ascension' offered some more bite-sized offerings in its twenty different campaigns (ten of which come from last year's game).

I was also disappointed to see that out of the twenty new campaigns, there were only two that take place in a fictional timeline. Furthermore, these fictional campaigns are still very much rooted in reality, and they didn't feel like much of a change of pace. I definitely admire how historically accurate the game is, but Koei Tecmo could've used these campaigns to offer up something different and fresh instead of what is mostly more of the same. So, yes, there are a ton of scenarios to pick from, but the core gameplay never feels very different. 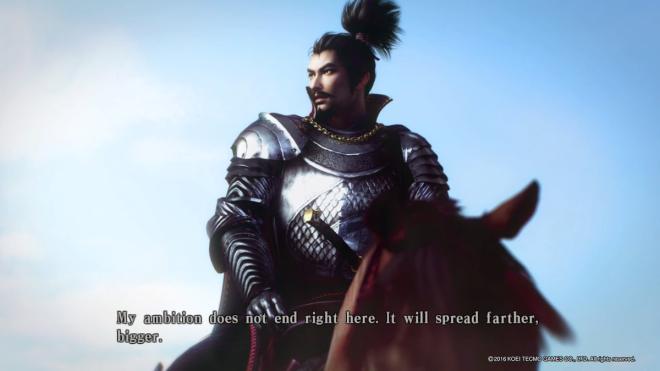 As expected, 'Ascension' looks virtually identical to 'Sphere of Influence.' That means it creates a decent looking virtual of Japan, although one that fails to be spectacular in any regard. Nothing aside from a few CGI cutscenes will impress players, and the art style is much more realistic than Koei's 'Samurai Warriors' depiction of the same Japanese soldiers. The game isn't really enhanced nor hampered by the visuals, as it looks good enough to avoid major complaints, but can't garner much praise by the same token.

It also should be noted that the game's user interface, just like 'Sphere of Influence,' is ridiculously small when booting the game for the first time. This can easily be remedied in the options by checking the "Increase UI Size" tab, and then the game is actually playable. I'm kind of surprised they kept the super small version as the default as the text is simply unreadable on a television. 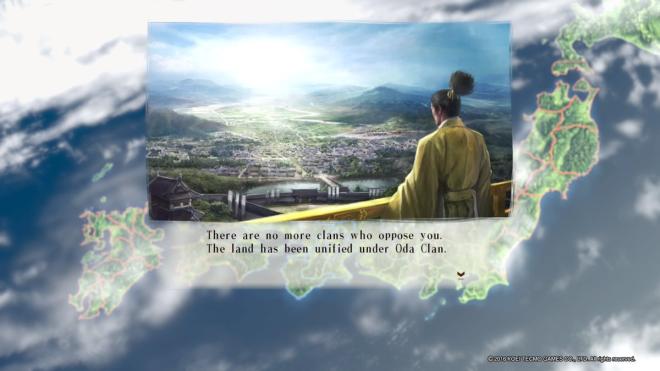 Much like the visuals, not much really stands out about 'Ascension's audio. The overworld features the relaxing instrumentals one would expect from a strategy game, and there are some more upbeat tracks for battles. Other than a pretty standard musical score, there are a few brief lines of English voiceover that get re-used to the point of tedium. Every month players will have to hear the same voice tell players about the past month's income and that they are "reporting in!" The options allow players to change the voices to Japanese, but that doesn't solve the repetitiveness.

The 'Nobunaga's Ambition' games have always been highly replayable, but 'Ascension' manages to take it to a whole different level. It features twenty different campaign scenarios, each of which can be played from so many different viewpoints. Simply choosing two different officers within the same clan can lead to wildly different experiences as playing as a non-famous Oda retainer was like night and day from playing as Nobunaga Oda himself. There is also a wide range of difficulty options, so I was able to begin playing on easy and work my way up to a custom difficulty setting that struck the perfect balance for my play style. All that said, the gameplay does start to feel like a grind, and I doubt I'll ever make my way through all of the campaigns since they rarely feel different enough. 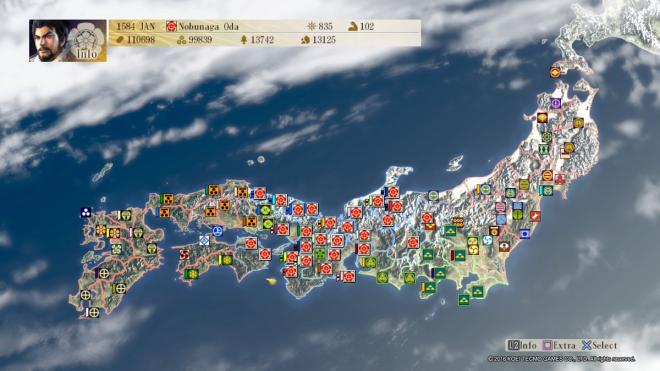 Despite largely being a repackaging of last year's game, 'Nobunaga's Ambition: Sphere of Influence - Ascension' makes smart changes to the formula that immediately pay off. The new game still controls a bit wonky using a controller, but the revamped user interface does make the strategy title more accessible. The future looks bright for Koei Tecmo's strategy series, and its new focus on individual officers is definitely the way to go.