The Game Itself
4.5 Stars
The Video: Sizing Up the Picture
4.5 Stars
The Audio: Rating the Sound
4.5 Stars
Replay Factor
2 Stars
Bottom Line
Recommended

The latest in a trend of dark, dystopian games, 'Beholder' comes to us from Warm Lamp Games out of Siberia. Before its release in November it managed to win several awards from the DevGAMM conference covering indie games in Russia, Belarus, and Ukraine.

Carl Stein is a typical man living in the "State", and has been given a new job. He is to report to a dilapidated apartment building that has been seized by the government and turned into public housing, and he is to be the landlord. The previous landlord, as the introductory cinematic shows us quite grimly, was incapable of carrying out his duties and forcibly removed from the premises. To his residents, Carl's tasks include renting out the units when they're available and fixing things that need fixing. Privately, however, Carl has another profession: government snitch. He is expected to peep on his residents, film them with hidden cameras, write reports about their activities, and when needed, call the police to arrest them for subversion. 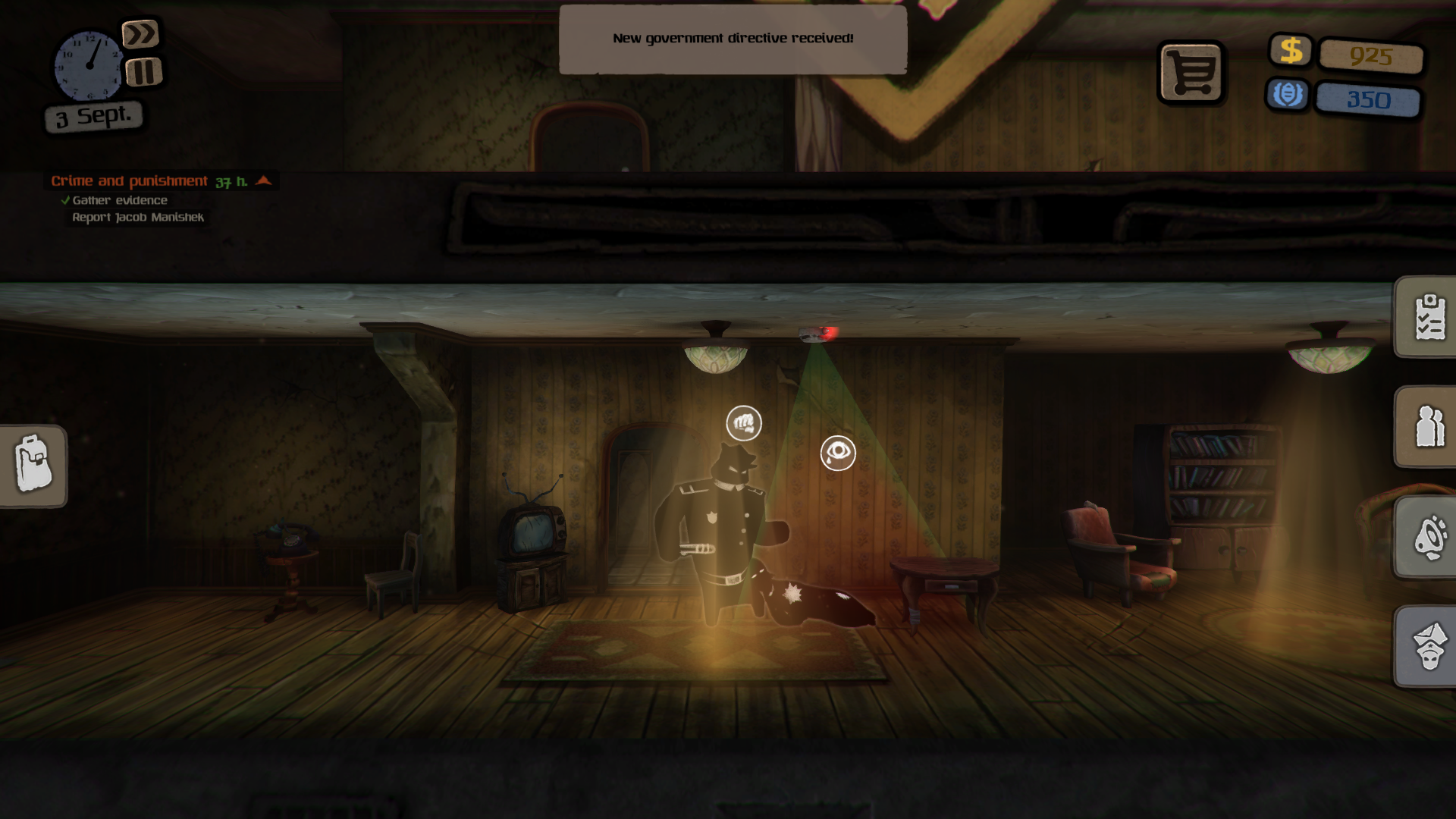 The State is a depiction of deeply authoritarian governments from the likes of Aldous Huxley and of course the real life Soviet Union, and routinely passes arbitrary directives that citizens violate at their peril. I am only too happy to do their bidding, as completing objectives offers me more money and reputation with which to buy supplies and better cameras. My first job was evicting a drug dealer from apartment #2, which didn't seem so bad. Drug dealers are easy to demonize in any country, after all. But after that, the Ministry of Order became more demanding. They wanted to arrest anyone owning foreign currency, anti-government propaganda, even fish and apples. 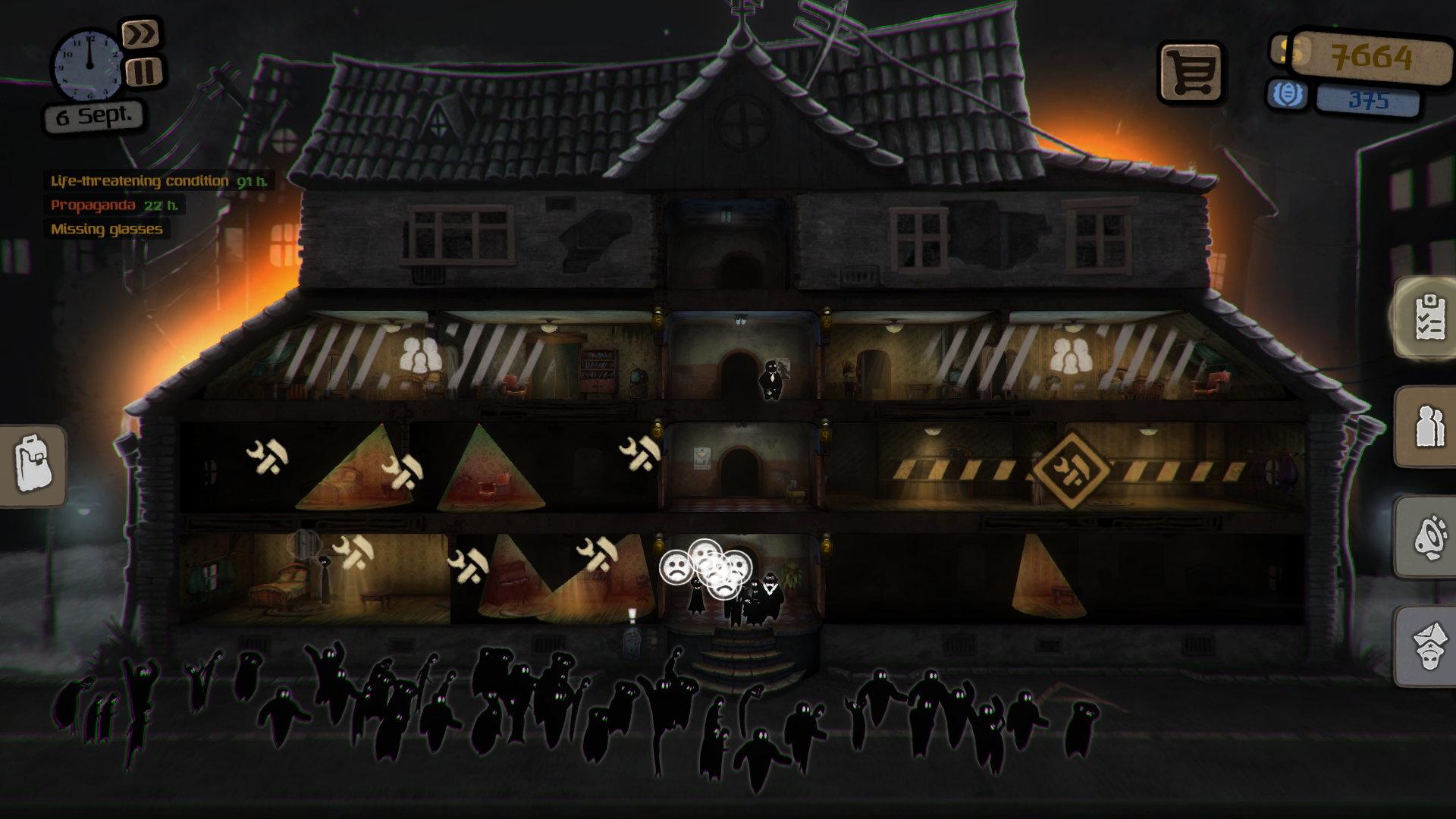 I would have been easy enough for Warm Lamp to stop there, making a dystopian sim where I simply peep on people and arrest them when I feel like it. But they went further and implemented a significant repertoire of quests that allow for interesting interactions and emergent gameplay. One of my first tenants, an esteemed doctor who was rather eccentric but otherwise an unimpeachable citizen, suffered from chronic loneliness and asked me to find him a girlfriend. I did so, and when my chosen call girl began to annoy him, he asked me to evict her. Maybe he shouldn't have moved her in after only one date, but who am I to judge? Despite her being an unemployed alcoholic, I had difficulty getting enough evidence for an arrest. So, I entered another resident's house when they weren't home, stole an illegal record from her armoire, and planted it in the call girl's things. From there it was just a quick phone call to get rid of her for good, receive my reward from the doctor, and take the original owner of the record out of harm's way, as she had done me a good turn in a previous quest and I would hate to see her go to jail. 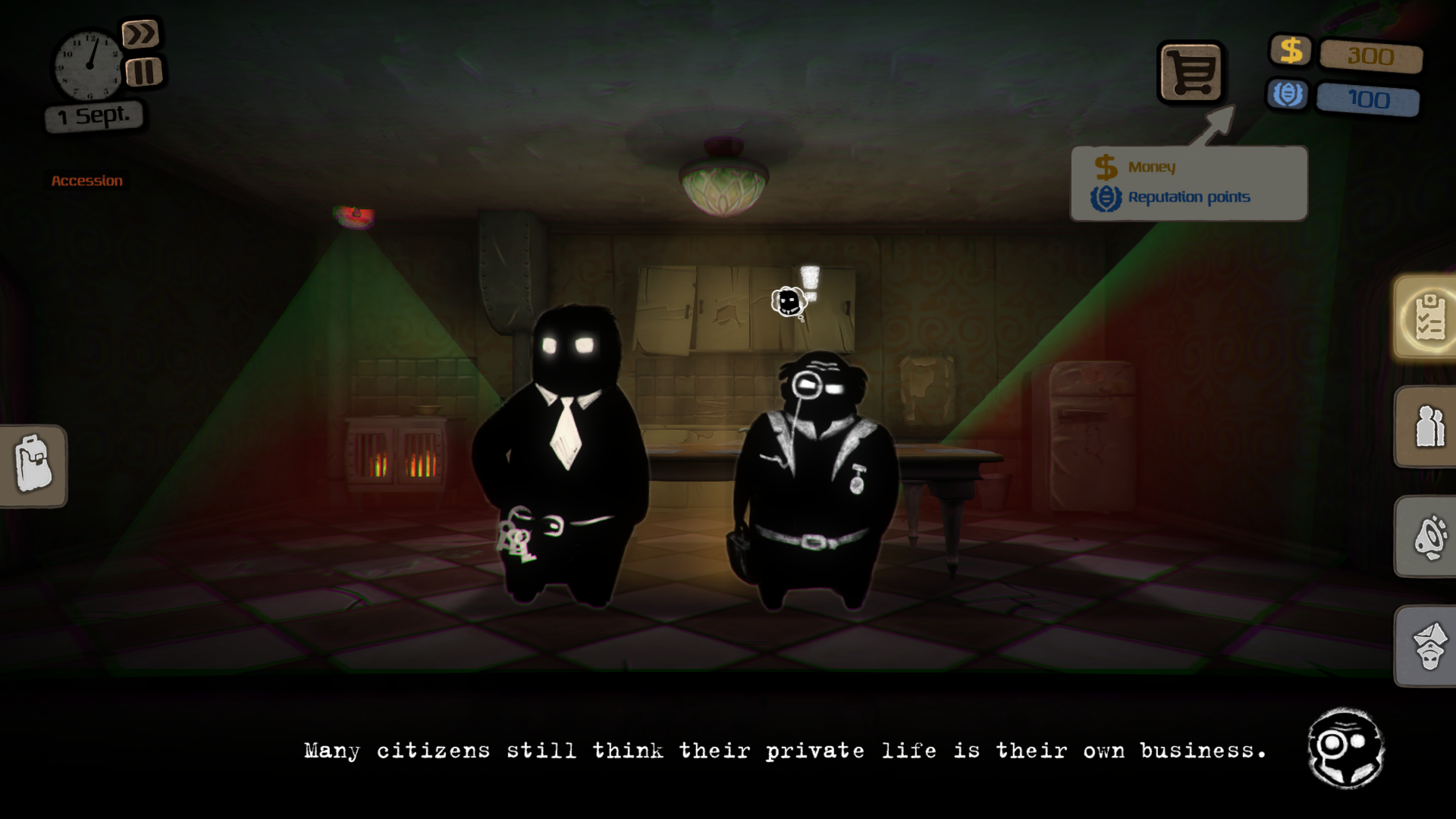 It's all quite dastardly, and I relish video games where the devs do a good job of making the player into a villain (even a sympathetic one). It reminds me a lot of 'Papers Please' in all of its bureaucratic, depressing glory, with similarities to 'This War of Mine' as well. A few things get in the way of perfection, like the overwhelming mission flow in the first half hour of the game. My own family members were the first offenders, bombarding me every few minutes with another selfish request. My son wanted college textbooks, my wife wanted a saucepan, my daughter needed expensive medicine to survive, etc. This might sound bad, but once she had passed away from her disease, and I had my wife and son arrested and thrown out for subversive activity (i. e., reading books), the game became much more enjoyable. I could dispense with the petty domestic issues and focus on my career - watching people in their bedrooms and writing profiles for the Ministry of Order. This is a very gloomy game, where failing questlines has serious consequences and not everyone is going to survive. Some of the quests lead to sudden game overs, like when I betrayed a resident who was receiving propaganda from a resistance group and he ungratefully stabbed me. The career of snitch is not without its occupational hazards. 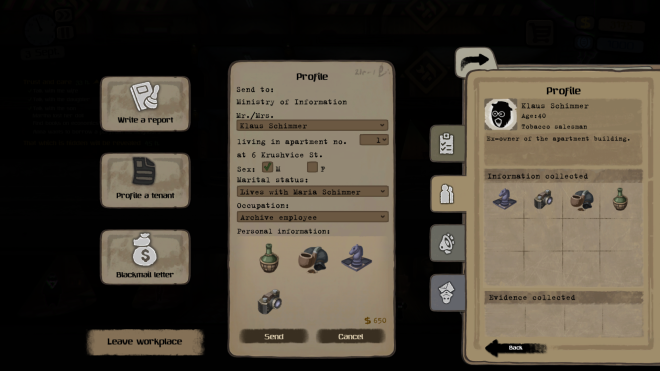 'Beholder' has a visual arrangement very similar to fellow dystopian game 'This War of Mine', where the action is on the 2D plane and the house is a cutaway ant farm. Carl gets around the floors by clicking around, and there's a level of stealth in avoiding residents who do not look kindly on having an uninvited landlord in their flats. The character models are pretty black and white cartoons, bereft of detail but still full of expression. Quests are done in text that is poorly translated, which is sometimes irritating and sometimes endearing, for its foreign quality. 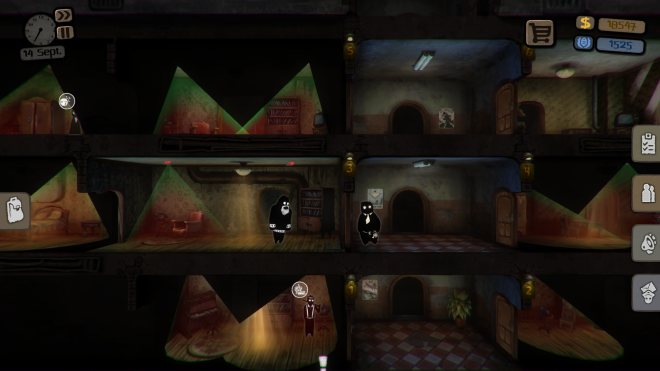 Voice acting is limited to short lines during cutscenes and a sort of Eastern Bloc simlish when the camera is zoomed in on individuals. The music is amazing; it's apprehensive and menacing with just the right amount of caricature, especially when the cops show up and start beating people into submission.

The main campaign is quite short at just a few hours and is perhaps the game's biggest failing. I would have enjoyed a sandbox mode that was lighter on the simple fetch quests and heavy narrative and more focused on the procedurally generated content, such as the randomized residents and their motivations and habits. 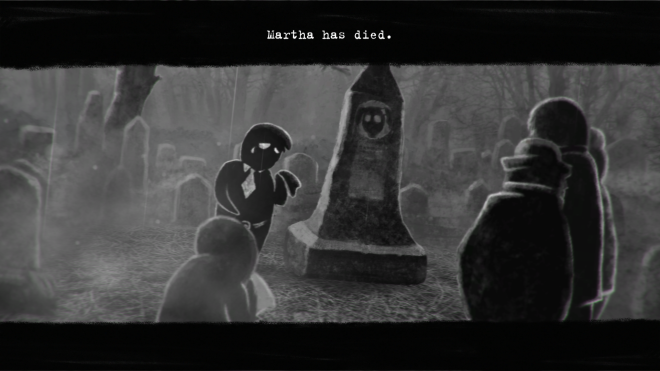 'Beholder' is a somber, harsh experience in terms of both its theme and its gameplay. The naggy and sometimes baffling routines of the residents can get in the way of a good story at times, and it's too short overall. Still, it's an interesting addition to the growing "authoritarian state" genre, and well worth its small asking price.