The Game Itself
4 Stars
The Video: Sizing Up the Picture
4 Stars
The Audio: Rating the Sound
3 Stars
Replay Factor
4.5 Stars
Bottom Line
Recommended

Disc version reviewed for Xbox One. Review contains some light spoilers for the 'Dragon Age' series.

The 'Dragon Age' franchise is produced by BioWare, a Canadian studio with a deep history of RPG development. They started in the late 90s/early 2000s with PC titles like 'Baldur’s Gate' and 'Neverwinter Nights' before releasing 'Star Wars: Knights of the Old Republic' with massive success. 'Dragon Age' began in 2009, with a sequel in 2011. It is a high fantasy series with a dark tone, as most of the problems the continent of Thedas faces begin not with evil monsters, but the hubris of men.

Thedas is a world (and continent - the two seem to be inextricably linked) populated by humans, elves, dwarves, and a race of tall, horned bipeds called Qunari. It has a level of technology roughly similar to Europe just before the Renaissance, and magic is common. Unlike many other fantasy worlds, magic is also a beacon to spirits and demons from another dimension called the Fade, separated from the mundane world by an ethereal fabric called the Veil. Because the use of magic can result so quickly in corruption or demonic possession, mages are tightly controlled, and in some cultures considered second-class citizens. Much of the politics of the series stems from the rivalry between the mages and the Templars, the military arm of Thedas’ largest religion, the Chantry.

'Dragon Age: Inquisition' is a third-person, party-based roleplaying game, much like its predecessors or RPGs of yore. Each member of the party has a class - warrior, mage, or rogue - which dictate the abilities of that character. During combat, a tactical interface is available that allows the player to stop time and give orders to each party member. One party member is controlled at a time by the player, and the other members behave in accordance with their AI when not controlled. The game permits a modest amount of tinkering with companion AI. Their preferred abilities can be changed, as well as their thresholds for using magic or drinking potions. 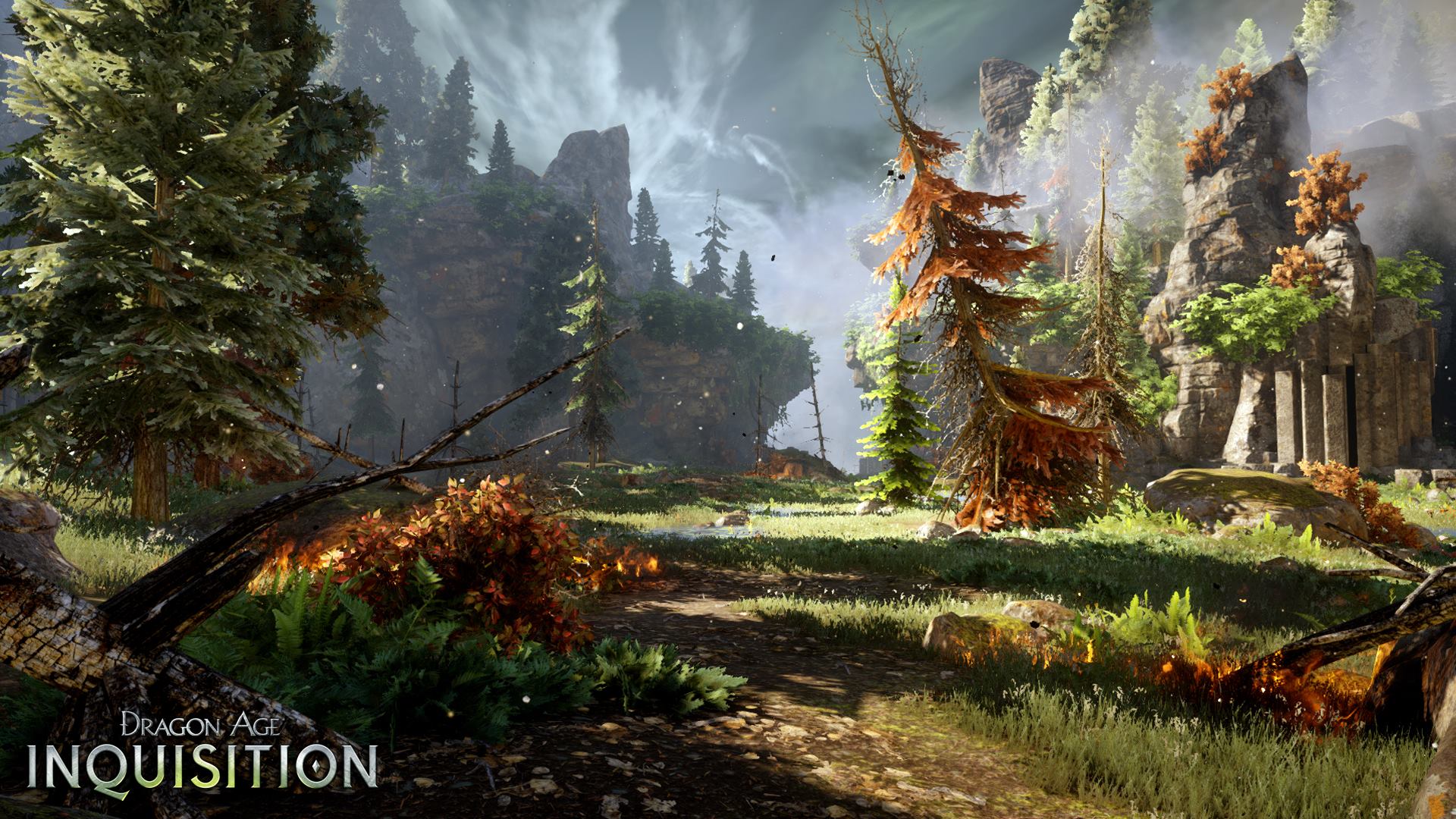 'Inquisition' takes place approximately ten years after the first 'Dragon Age', and three years after the end of 'Dragon Age 2'. The events of the first two game are salient to the plot of 'Inquisition', but the game is accessible to players new to the franchise. New and returning characters alike are explained, and the game’s massive lore database, the Codex, does a decent job of filling in anything else players have missed. The main character in 'Inquisition' is customizable, and unlike Hawke in the previous game, need not be human. Choices made in previous games and expansions can be carried over using an out-of-game interface called the Dragon Age Keep. The Keep requires an EA Origins account and is simultaneously elegant and clumsy. It is elegant because of its accessibility and production value, but clumsy due to forcing players to have to use an out of game service and link accounts up through EA. Because I had an EA Origins account linked while playing both previous games years ago, I noticed that many of my decisions had been successfully uploaded, including some very small missions and interactions I had completely forgotten about. Any of the choices can be changed, and completely new players can also utilize the Keep to personalize their 'Inquisition' experience, although they may not fully understand all of the choices they’re making without some context. 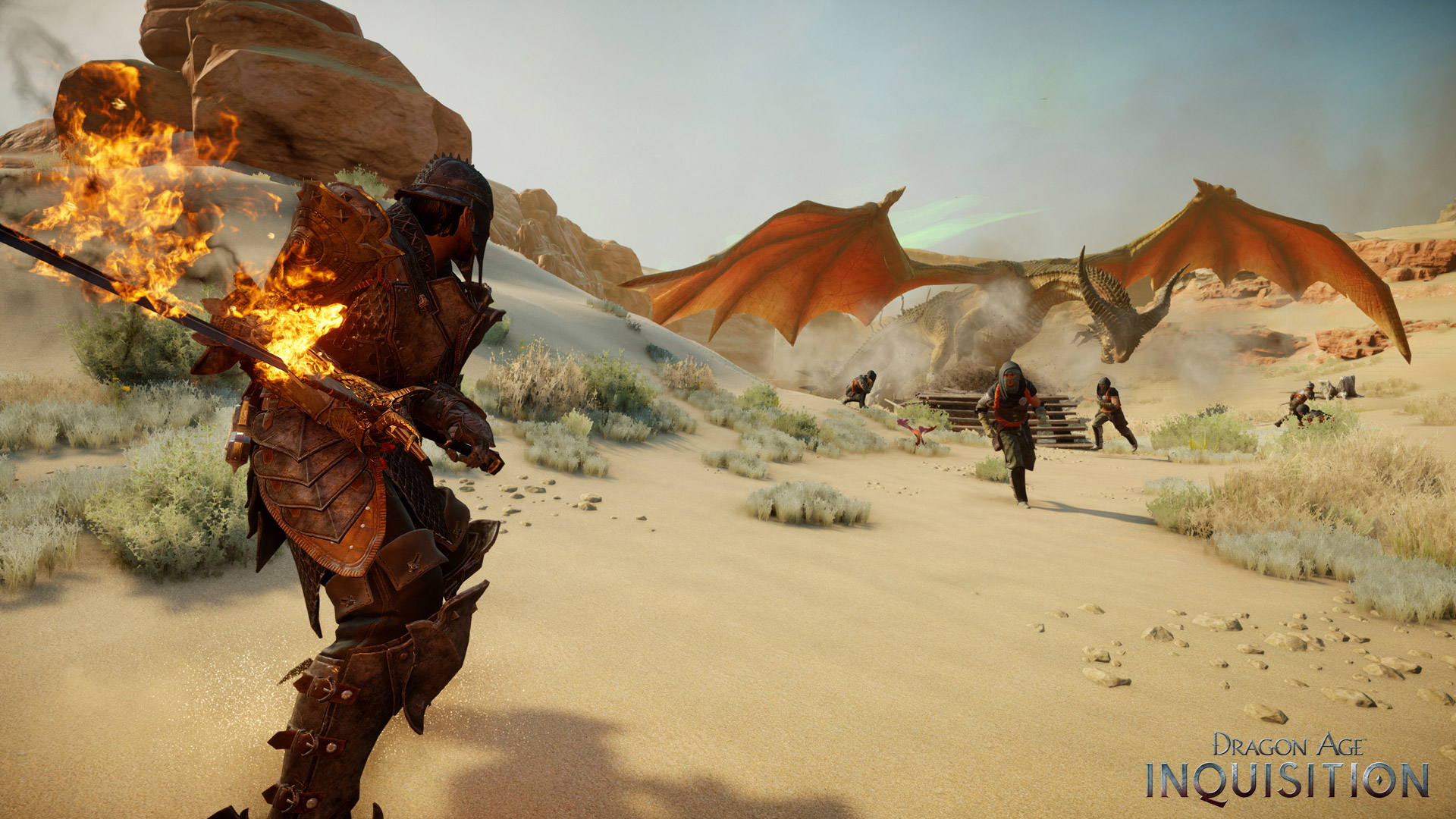 The game’s main character starts out as more or less a nobody, but is immediately drawn into the world’s largest conflict: the ongoing mage-Templar war. The two factions have agreed to meet to discuss a ceasefire, and it is at this meeting that a hole opens in the Fade and the main character is unceremoniously dumped into the physical world. This hole, called the Breach, also completely destroys the meeting and all attendants, some of whom were very powerful, except for the main character. The protagonist realizes they have lost all of their memories from immediately before the incident and, more alarmingly, have a magical mark on their hand that can control holes in the Veil. I will refrain from discussing the story in more detail, but suffice it to say that BioWare has done a good job with its narrative. The script is occasionally vague but mostly free of plot holes or paradoxes. The protagonist’s sense of amnesiac confusion and distress in the beginning of the game mirrored my own, and for once a complete lack of exposition was perfectly acceptable. There are a few surprises and plot twists throughout the narrative as well. The weakness of the story is the roster of supporting characters. Most of them are thin and their reactions to my decisions were relegated to text updates that would pop up on the side of the screen, noting their approval or disapproval. The straight-laced Vivienne, for instance, rarely voiced her opposition to my pro-mage agenda. The elf Solas couldn't be bothered to comment when I made decisions based on my elven heritage. Even Varric, who was a vocal party member in 'Dragon Age 2', seems surprisingly sedate here. 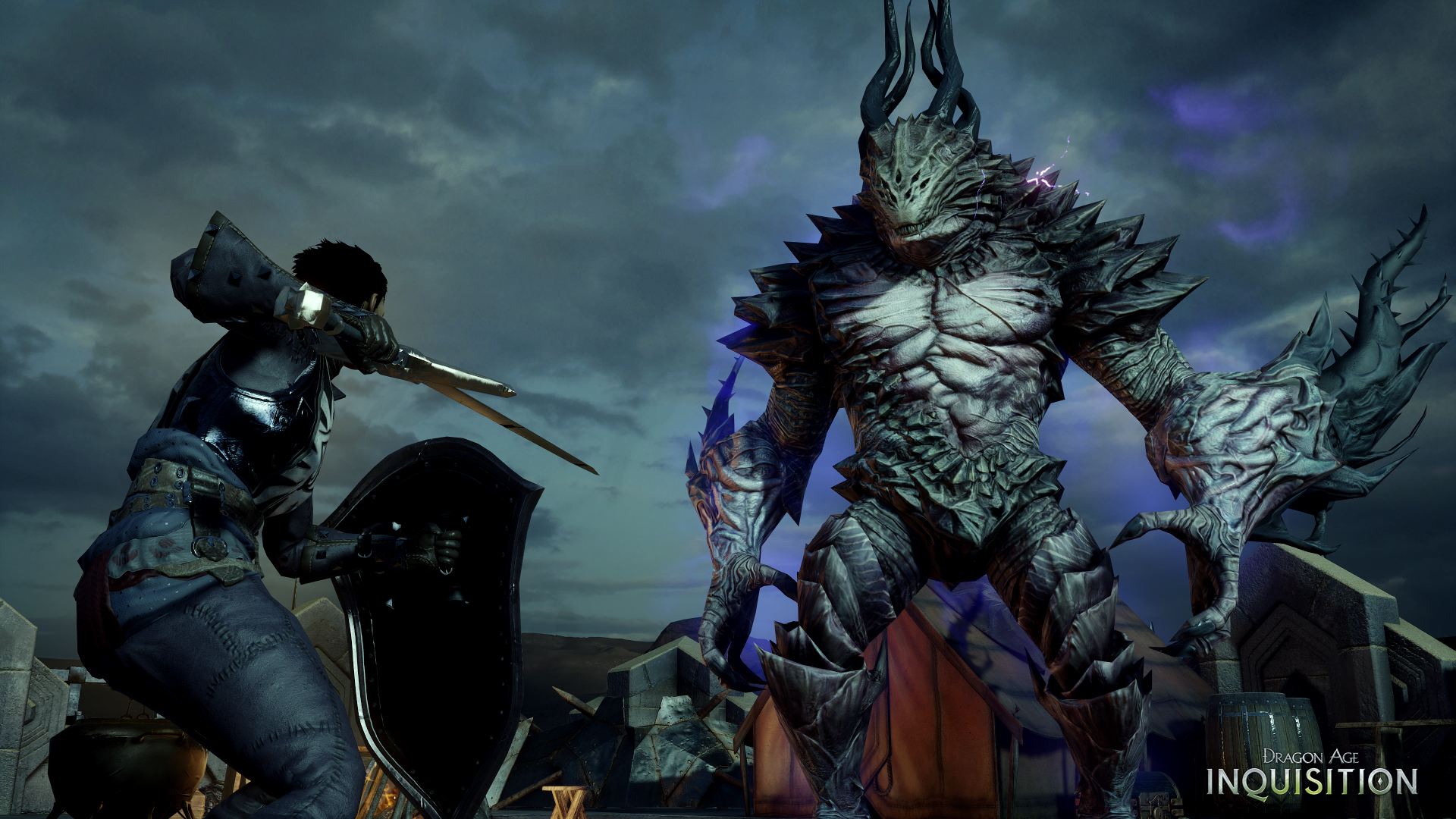 Combat is serviceable in 'Inquisition', but after 50+ hours of play can get a bit bland. This was especially true if I only controlled one character at all times. Switching out to different ones throughout each fight provided some diversity, and the cast of party members is large. I still miss the extremely detailed, micromanagerial tactics of the first game, and in 'Inquisition' the party AI is at a low point. Often my party members didn’t seem interested in combat at all, and I had to manually induce them to fight with frequent, directed commands. Outside of combat, 'Inquisition' is a beauty. The world of Thedas is more open than ever, and dozens of hours can be sunk into exploration, crafting, missioning, social interaction, base upgrading, and more. The amount of content here is extreme, and remains engaging through its long playtime. The mechanics of the Inquisition itself, which cast my character as would-be leader of an entire movement and not just a questing party leader, add another layer of depth. 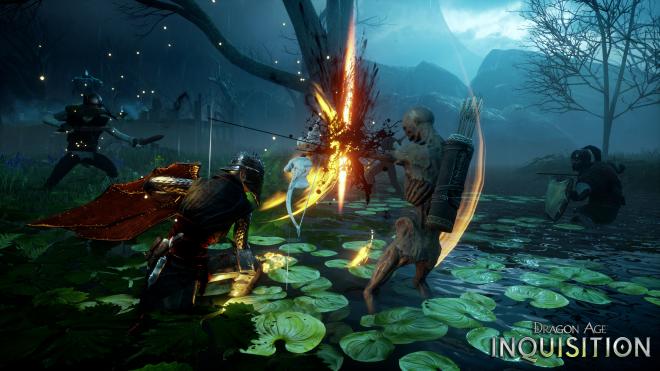 'Inquisition' looks like a fantasy epic set in a magical, medieval world. Because we’re still in a kind of in-between stage of gaming generations, it is important to remember that the next-gen versions of the game look much like the last-gen versions but with a high-def coat of paint. Still, BioWare has done well with the Frostbite engine, and the SpeedTree plugin that has been used to great effect in Hollywood adds striking legitimacy to much of the foliage and flora of Thedas. There are some bugs, like characters clipping into the ground and squirrelly animations during combat (my Inquisitor, a rogue bowman, often fired in the opposite direction of the target, although the arrows would still hit). The Xbox One version also has a resolution of 900p, noticeably lower than its PlayStation brother. 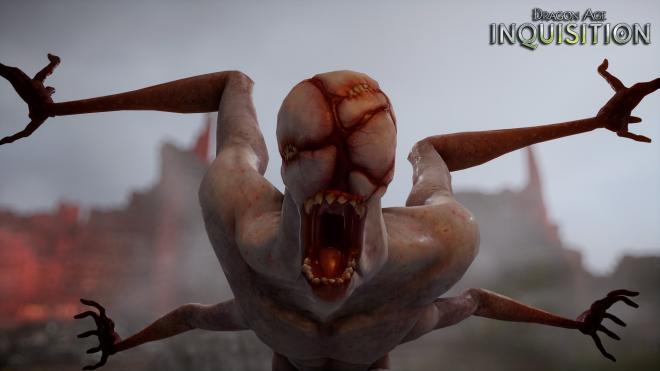 The music here is a high point, especially in the taverns where bards sing pieces that sound nearly as good as contemporary pop Celtic recordings. The score contributes effectively to the feeling of empowerment while playing the Inquisitor, although the strange BioWare tradition of awkwardly quiet cutscenes continues. Voice acting is on the lesser side of decent, with many of the performers just not getting into their parts, and bizarre imitations of the French accent abound. Most damning are the audio bugs that nearly shut down my game on a few occasions. Sometimes the sound would cut out completely. Other times a conversation would simply stop and I would have to skip forward through lines of dialogue, like trying to get through a damaged portion on an audio CD. This meant losing valuable story points and, at least once, forcing a game restart.

The liquid nature of the Dragon Age Keep, along with the many decisions that can be made throughout the game and the significant changes that can occur through the choice of the Inquisitor’s race and class, provide some replay value for those who do not mind experiencing the story again. Even one playthrough goes a long way. I spent hours just exploring, and there are items, puzzles, upgrades, missions, and other objects of interest in seemingly every nook and cranny.

There is a multiplayer mode, but it is a soulless thing with little appeal. Parties of four human players enter a dungeon, kill a bunch of AI creatures, and in my experience, get wiped out during the cheap final boss fight. This would then be repeated for as long as I remained in matchmaking. There is a lot of customization available, like unlockable characters, crafting options, and new abilities, but 'Dragon Age: Inquisition' is best experienced in the single-player. 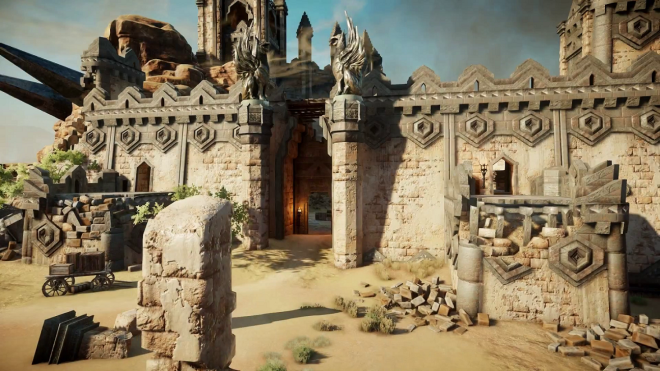 'Dragon Age: Inquisition' vies with 'Diablo' for the spot of best RPG currently available on the Xbox One. It avoids the grind endemic to games of its kind and has a good story on top of an even better open world. It is not without its problems, many of which BioWare has been criticized for in the past, but is nevertheless an important RPG that is both superior to its predecessor and certainly gives players their money’s worth.