3DS
Worth a Look
4 stars The Game Itself
4 Stars
The Video: Sizing Up the Picture
4 Stars
The Audio: Rating the Sound
3.5 Stars
Replay Factor
3.5 Stars
Bonus Content
5 Stars
Bottom Line
Worth a Look

There are a collection of Nintendo franchises that fans clamor for through long and arduous absences. Though HAL Laboratory holds the reins on a few of these infamous titles, the studio's most beloved character, Kirby, has still managed to appear in all of his pink, puffy glory on just about every Nintendo platform. He leaves no console untouched, and now it's the 3DS's turn. With so many Kirby games, there has been equal share of brilliant and so-so. 'Kirby: Triple Deluxe' appears to be a traditional Kirby title, meshing platforming, mild puzzlery and, of course, a bit of combat to accommodate that famous copy ability. That's all accounted for, which in itself is a relief when looking back at his recent history. The 3DS is a popular platform with some gaming gems, but is this new Kirby one of them?

The third dimension seeps deep into the very core of 'Kirby: Triple Deluxe.' Having basically gone into this game blind, completely unaware of if this was one of those mainline franchise entries or a weird offshoot that simply uses the well-known character as a front for some other kind of gameplay, I still never expected such a strong emphasis on 3D. Framed more in the traditional, technically two-dimensional platformer style that keeps Kirby a strong name in gaming today, he and all his surrounding elements, the levels and the enemies, are constantly pushing in and out, not just forward and back. Foreground and background are equally traversable and dangerous as a natural part of every level's progression. It's a wonderful step beyond the simple feeling of depth that most 3DS games offer. It's a real, tangible element to the gameplay. 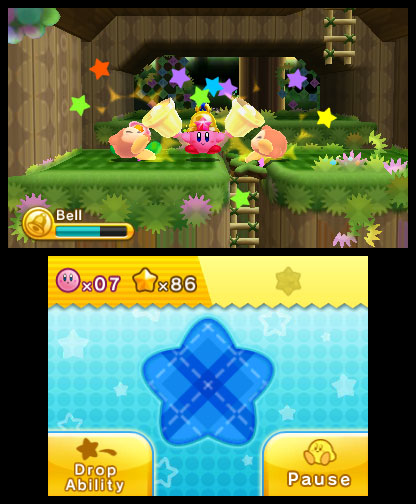 Kirby can also, on occasion, increase his sucking power to the point where giant snakes are engulfed entirely, boulders are siphoned through tubes and into his stomach, and tree trunks are but edible twigs, but only after a long and effectively disturbing sequence. They call it Hypernova, and it makes you think, really think, about what kind of horrible vortex exists in the pit of that innocent-looking puffball's body. But that's neither here nor there, as vortexes go. As a gameplay element, it's a welcome mix-up to what generally feels like a well-polished, low-risk assortment of levels. 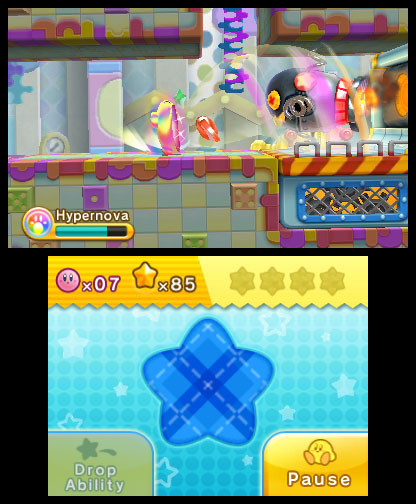 And it's a strong element of the game that grabbing onto a warp star and zipping to some new unknown in these colorful and densely packed levels is never anything short of surprising. Kirby might go Hyperrnova and suck down a hay house, then a wood one, but then encounter a brick-laden totem pole of canons.

Another strong suit, more so than past Kirby titles, are the abilities. As you should well know by now, Kirby takes in his enemies and pops out a set of themed attacks. Suck up a fire guy, gain a torched dash and red hot breath. Suck up a guy with a bow and arrow, gain the some ranged attacks. Duh. This time around, the abilities feel more complex than usual, more like 'Smash Bros.' movesets than just some extra damage or range. There's a lot of depth just figuring out exactly what you can do, and seeking out hard-to-find abilities. The little guy is more versatile than ever. 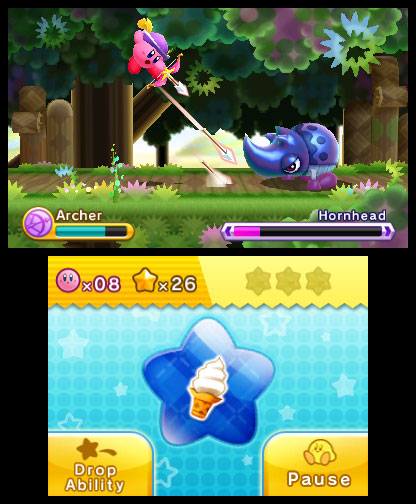 Skirting through levels, trying out new abilities and felling a generally wide cast of baddies, mid-bosses and level bosses, isn't so much a challenge as it is a flight of whimsy in a colorful and often humorous world. Nothing about 'Kirby: Triple Deluxe' begs a tasking of the mind, but every moment grabs your attention, whether it's a candy-colored tank spewing cannonballs at you from the background, or Kirby is once again zipping to and fro the foreground in search of Sun Stones, those being the requirement to unlock further levels.

Notably, I never strained to open up a new level, as the stones are never really hidden. Sometimes they'll require the solving of a puzzle or a specific kind of ability (usually acquired from a nearby enemy), but really the levels and Sun Stones are there to widen your eyes in childish glee, to lead you from one goofy thing to the next. Boss fights sometimes strain your endurance, and you might find yourself yearning for a more tactically sound set of abilities, but then it's over and you realize all you had to do was follow the pattern and exhibit a little patience. 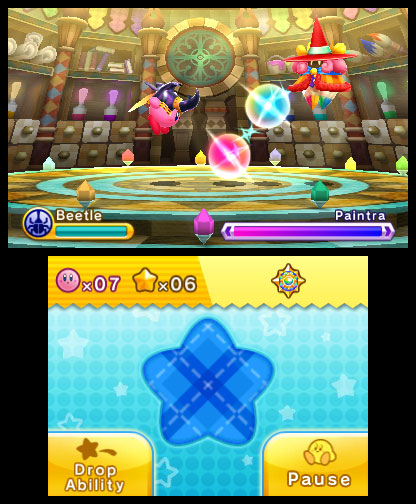 I've always enjoyed Kirby boss battles over most Nintendo platformer variants, as the system in place encourages an actual toe-to-toe standoff of health bars rather than an elaborate platforming sequence. That holds up well here, especially given the emphasis on plane jumping in enemy attacks. Again, not so much a challenge as a lightly engaging display of bewildering fancy, but enjoyable nonetheless.

Kirby's world has always struck me as both imaginative and wildly scattershot. While Mario, Donkey Kong and our other platforming friends zip through clear-cut thematic tropes, Kirby pops from one insane dream world to the next, always as bubbly as they are meaningless. 'Kirby: Triple Deluxe' stays the course, by which I mean there really is no course. Bookended by a short few gorgeously rendered cut scenes depicting some wacked out beanstalk-climbing tale, the worlds and levels within them make very little sense. They don't need to. You're a pink puffball with allegiances to a blue bird king, applying skills in swallowing to fell your mysterious foes.

If you ever wanted to see the back of any number of cereal boxes animated and rendered in three dimensions, this is your game. In concord with the level design, the visuals are well-layered and sufficiently popping, Kirby and friends animated with exacting exaggeration appropriate to the exceeding ridiculousness of it all.

The score is bouncy with a hint of zany, topped off with a creamy sense of childish urgency. Old Kirby classics mesh in perfectly with the new, so anybody with experience in dreamland shouldn't feel too surprised. In other words, it is Nintendo standard, palling in comparison to Mario and Donkey Kong while soaring well over the atrocities of the recent 'Yoshi's New Island.'

Though the main quest can feel a bit short, the entire package is fleshed out with a smattering of bonus modes. Most important among them are two. After completing the story, you can time attack the entire campaign as King Dedede, hammer and all, seeking out warp zones to skip ahead and save a few minutes. That in itself is worth another playthrough, as the experience is entirely different with a clock ticking away with the drive for collectibles and new abilities eroding to nothing. There's also a multiplayer mode, Kirby Fighters, which is basically 'Super Smash Bros.' light. Anyone looking to warm up before this summer's big release might find it amusing, but there isn't all that much to it. Sadly, it's local only. 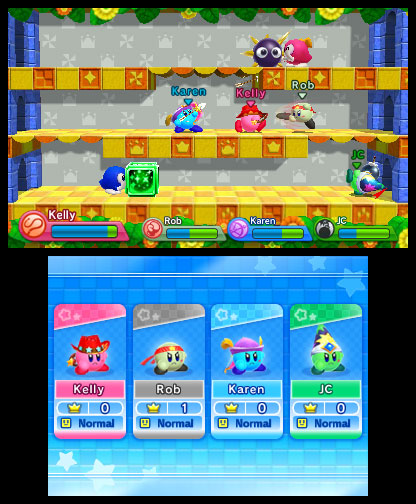 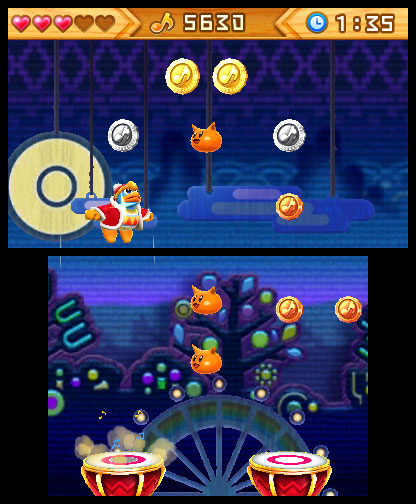 Rounding out the 'Dedede Tour' and 'Kirby Fighters' modes are a rhythm mini-game starring, again, King Dedede and 'The Arena,' a boss rush mode with similarities to 'Smash Bros' All–Star mode. Limited healing items act as your reprieve in-between randomly assorted boss fights. Kirby can switch powers in between as well. All in all there's an impressive arrangement of extras and goodies. The collectible types even have a catalogue of adorable pixelated key chains they can find throughout the campaign and extra modes. HAL Laboratory has a knack for stretching any kind of gameplay into as many modes as possible. 'Kirby: Triple Deluxe' is no exception.

Nintendo is on a bit of an odd streak lately. Donkey Kong and Mario wowed us on the Wii U, while Yoshi on the 3DS was a disappointment. Strong franchises are making more appearances than ever as the company seeks to stay strong in the wake of the struggling home console, so it's a fear that the once-foregone high quality of any Nintendo-bred title might dip. 'Yoshi's New Island' seemed to add weight to those fears, but Kirby's latest foray would seem to swallow them right back up.

As any game on the console should be, 'Kirby: Triple Deluxe' was built explicitly with the 3DS hardware in mind. Intelligently implemented 3D effects, an evolution of Kirby's abilities and the occasional wackiness that comes along with a Hypernova sucking powerup all work well to keep you engaged in spite of the lacking challenge. And the plethora of bonus modes fill out the package nicely. It's no revolution, but it's Kirby at his best. 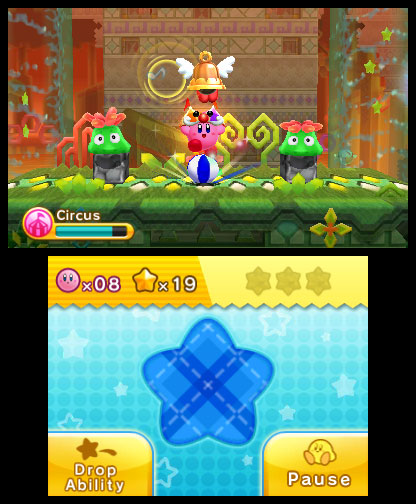