The Game Itself
3 Stars
The Video: Sizing Up the Picture
2.5 Stars
The Audio: Rating the Sound
3.5 Stars
Replay Factor
1 Stars
Bottom Line
For Fans Only

Back to the Future: The Game

Before garnering critical acclaim and Game of the Year buzz with 'The Walking Dead,' Telltale Games was a company with the reputation of releasing modern day incarnations of such popular properties as 'Monkey Island' and 'Sam & Max.' In 2011 though, the developer tackled two big movie franchises, 'Jurassic Park' and 'Back to the Future.' For 'Back to the Future: The Game,' Telltale set the story after the film trilogy, and yet it was always clear from the original announcement that the game is meant to touch upon what made the films so enjoyable. Reviewing this game three year after its release provides the unique opportunity to revisit one of Telltale's more overlooked titles, especially in the wake of 'The Walking Dead.'

It would be hard for anyone to make an argument for ‘Back to the Future’ not having solid status as an iconic piece of pop culture. While there may be debate when it comes to the quality of the second and third installments in the film series (I personally love both), there is absolutely no debate that the film's two biggest actors, Michael J. Fox and Christopher Lloyd created memorable, appealing characters: Marty McFly and Emmett 'Doc' Brown. With Michael J. Fox's diagnosis of Parkinson's disease and year-after-year passing by, the hopeful rumors of a fourth film in the series were all but dashed. Enter Telltale Games and their critically positive track record of revitalizing the graphic adventure genre; add in the Back to the Future series including Christopher Lloyd and an astonishingly great Michael J. Fox impersonator and maybe, just maybe, the hunger for a fourth movie could be satiated. 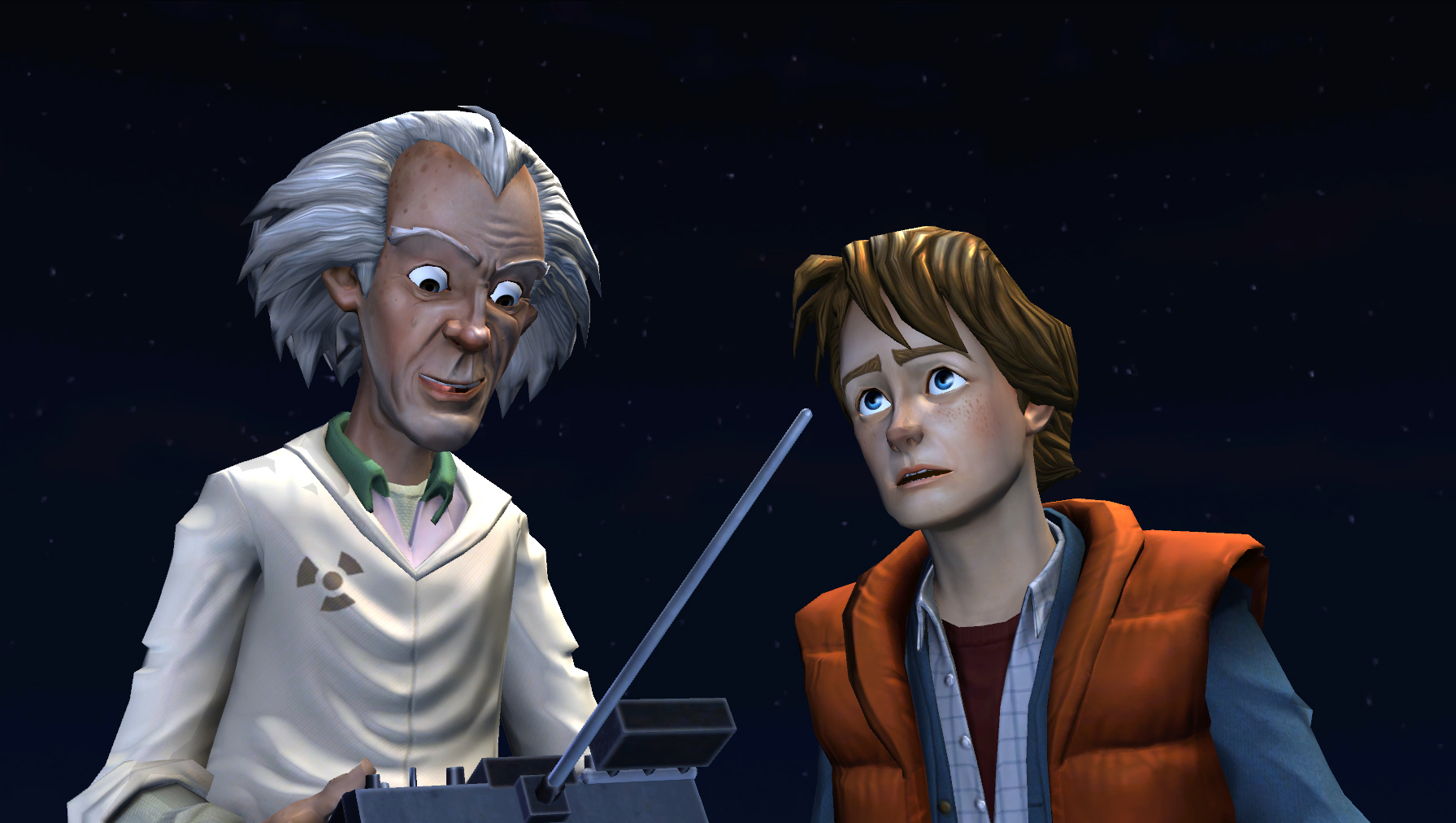 'Back to the Future: The Game' plays much more like Telltale's handling of 'Sam & Max' or 'Monkey Island' than their more ambitious work moving the genre forward in 'Jurassic Park,' 'The Walking Dead,' or 'Fables.' Following the tried-and-true episodic delivery method, the game picks up in very familiar territory, recreating the famous testing of the DeLorean from the first film; it's a great nod to fans, the iconic scene, all while being a great narrative launch pad to play with the series' central plot device of time travel. It's not long before Marty is facing series antagonist Biff Tannen to get his hands on Doc Brown's notebook and hop in the DeLorean to discovery where Hill Valley's resident mad scientist has disappeared. 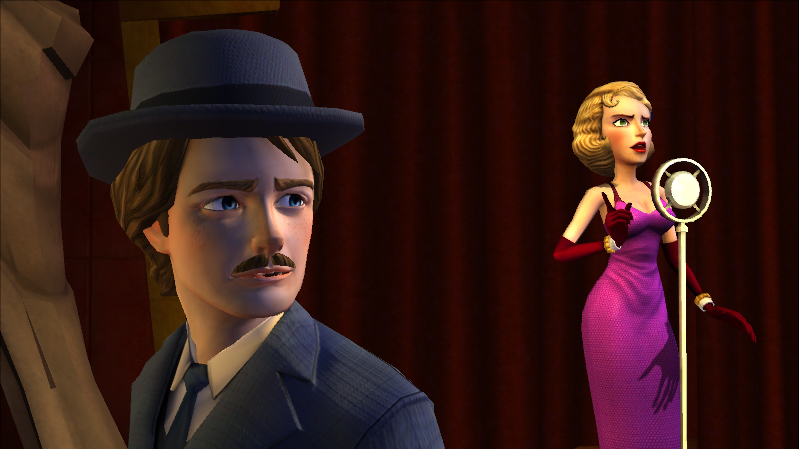 Over the course of the game's five episodic entries, the player is tasked with restoring balance to the timeline yet again, journeying back to the early 1930's and enlisting the help of a younger, but far less personable Doc Brown, all while experiencing a drastically altered 1986, a la 'Back to the Future II's' dystopian Biff-centric alternate timeline. Speaking strictly as a fan of the film series, 'Back to the Future: The Game' does somewhat satisfy my fond dream of a fourth film, but nowhere near the levels that 'Ghostbusters: The Game' did the same for it's own series. Instead of exploring a radically new direction, 'BttF: The Game' falls into a glut of lazy plotting, and its healthy dose of nostalgia quickly comes off as weak, hackneyed scripting. It's definitely full of the 'Back to the Future' vibe, but when put in the grand scheme of things, the end result feels inconsequential; to make a long story short, each new episode exemplifies the law of diminishing returns, to the point, that a final voice role by Michael J. Fox himself, rings a tad hollow. 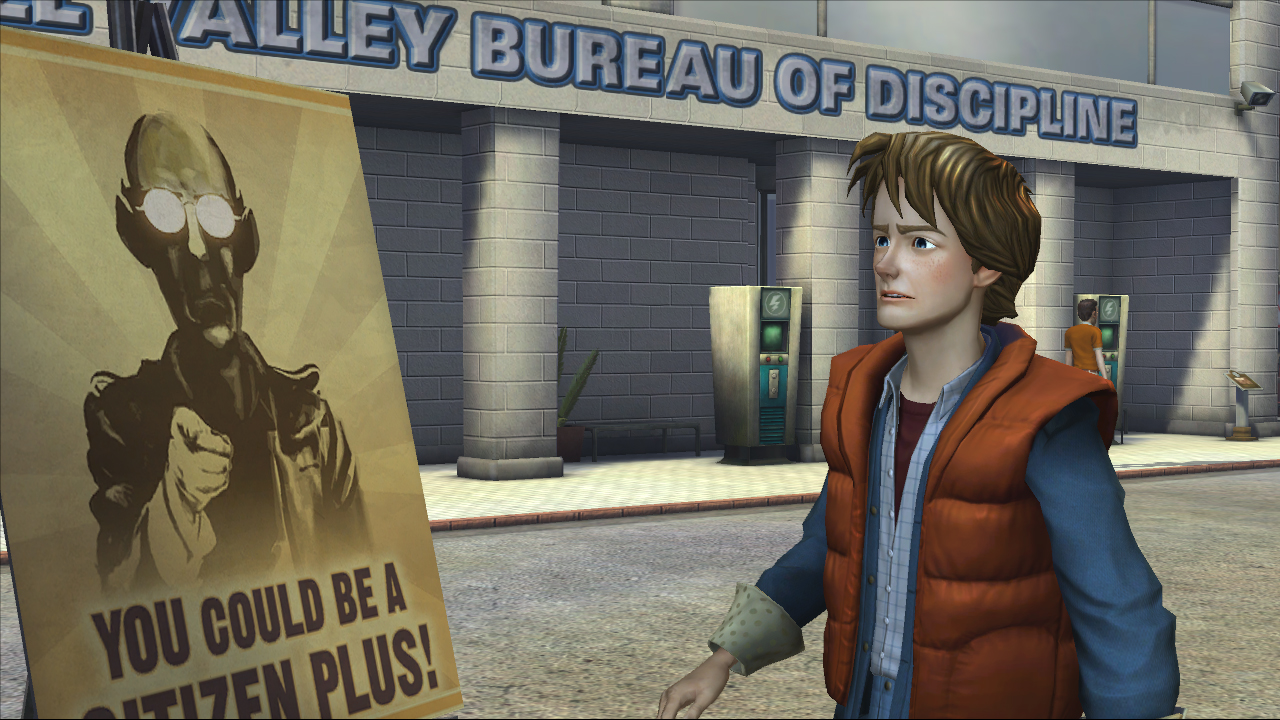 On a gameplay front, 'BttF: The Game' hits generally consistent marks. It's your standard graphic adventure, well adapted from its point-and-click origins on the PC to the PS3 gamepad. You can look at things, use things, grab things, and most importantly talk to other characters with general ease; what's not always easy is figuring out the puzzle-centric heart of the game and frankly while I see the necessity for a hint system in this day and age, the sheer idea of it goes against what I and, I'd argue numerous other gamers loved about the genre during it's mid-90s heyday. Visually, 'Back to the Future: The Game' suffers from many chronic issues gamers familiar with Telltale's offerings expect. The visual style is highly exaggerated, although the likeness of key characters is greatly appreciated. Colors are bright and snappy, although the overall resolution and detail is lacking. There's occasional issues with stuttering between sequences or to and from cutscenes. It's nothing jarring, especially when compared to the most technically buggy Telltale game, 'Jurassic Park,' but the lack of seamlessness is what reminds fans that it's a game and not meant to be a substitute for a film. 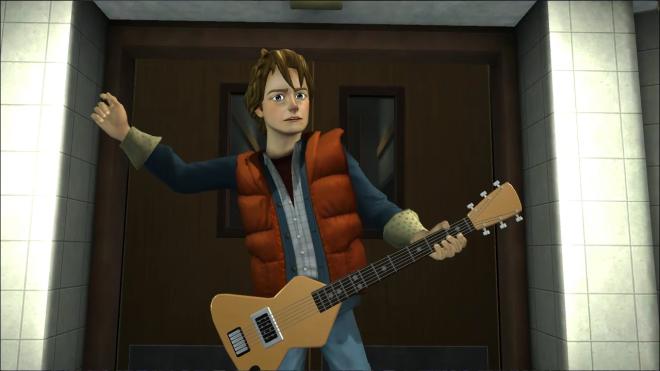 Aurally, 'BttF: The Game' hits it out of the park. AJ Locascio is an amazing substitute for Michael J. Fox and capture's the youthfulness and likable personality of the character, while Christopher Lloyd is naturally brilliant as Doc Brown. James Arnold Taylor deserves a quick mention as the 1930's version of Doc Brown, completing a tough vocal performance, that Lloyd is incapable of pulling off at his age. Dialogue is the driving force behind the game, but the sound design and soundtrack all come together in the end, quite nicely to provide a quality gaming experience.

Replay value in 'BttF: The Game' is highly limited. Given the weaker storyline and lack of branching narrative, the game itself is really a one-and-done experience for most gamers. I could see mega fans revisiting this a year or two later, perhaps after binging on the original film trilogy, but even that may be a stretch. While Telltale delivers a generally accomplished graphic adventure in the strictest sense of the term, 'Back to the Future: The Game' is a title that ultimately, fails to live up to its pedigree. It's very consistent in what it does; yet it's overwhelming lack of ambition and general tendency to skate by on good feelings shortchanges its core demographic. In all reality, someone less familiar with 'Back to the Future' may find more pure value out of the title; fans will definitely want to give it a crack though with the warning that nostalgia only goes so far.