The Game Itself
4.5 Stars
The Video: Sizing Up the Picture
4 Stars
The Audio: Rating the Sound
4 Stars
Replay Factor
4 Stars
Bottom Line
Recommended

Game developers began flirting with scary titles in the 1980s, but it wasn’t until 1996’s 'Resident Evil' that "survival horror" became a thing. Published by Capcom for the PlayStation, 'Resident Evil' was the brainchild of Shinji Mikami, who took pages from earlier games like 'Alone in the Dark'. Mikami has since left Capcom but is still working on scary stuff like 'The Evil Within.'

Survival horror has fallen by the wayside in recent years, supplanted by the more commercially viable action horror. In a true survival horror game, lots of scary things happen to the player, who is often incapable of fighting against them. The inventory must be carefully managed (if there is even an inventory at all), as supplies are scarce. In earlier 'Resident Evil' titles, puzzles were common, and players were often encouraged to flee from combat rather than spend precious resources that would be better used later against powerful bosses who were otherwise inescapable.

Now, nearly 20 years after the original PlayStation debut, Capcom has elected to return players to the mansion that started it all. This isn't the first time that the original 'Resident Evil/Biohazard' has returned in a big way, but with all the HD remastering going on, why the heck not bring 'RE' out for a new generation of gamers?

This game is not technically a remake of the original PlayStation title. Rather, it is a remake of the 2002 GameCube version, which was quite different than its predecessor. The premise of the game is mostly unchanged, however. Several elite police officers from the fictional Raccoon City are dispatched to a forested area to investigate a series of grisly murders. In the woods they are attacked by mutated dogs and forced into a creepy mansion, where the officers split up and begin to explore the secrets of the mysterious Umbrella Corp and its "pharmaceutical" program. 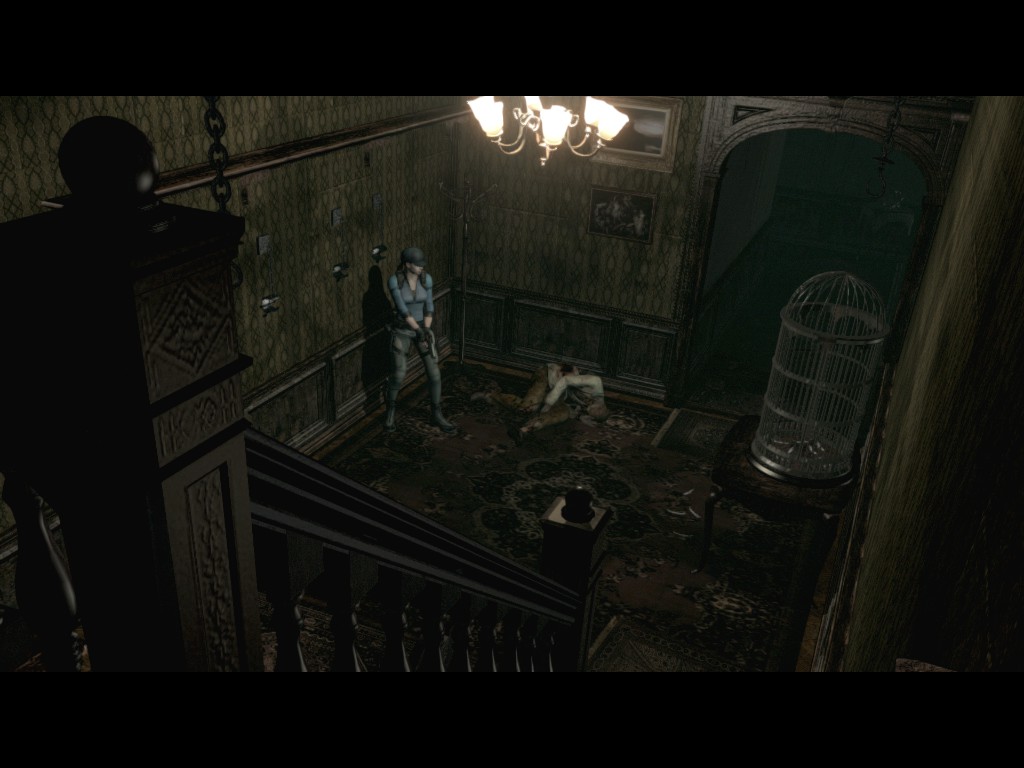 'Resident Evil' is presented in the third-person with fixed camera angles, not the over-the-shoulder format popularized in 'Resident Evil 4' and beyond. Two characters are offered for play at the beginning of a new game: Jill Valentine and Chris Redfield. Jill takes more damage from attacks but her many pouches and pockets give her a larger inventory, and her lock pick makes her the master of unlocking. Chris is sturdier in combat but lacks the inventory space and lock pick, requiring more item management and exploration for keys.

As I explored the massive Spencer Mansion, I was reminded that slow and steady wins the race in 'Resident Evil'. The cameras and enemies are placed in such a way that charging forward is usually rewarded with a surprise zombie kiss or some other scary business. Supplies were a bit more common than I remembered, however, and my item boxes were soon filled with surplus medicine, ammunition, and weapons. The 2002 version introduced defensive items, which are daggers, tasers, and other small weapons that can be used automatically by the player character when grappled to release themselves and cause some damage. 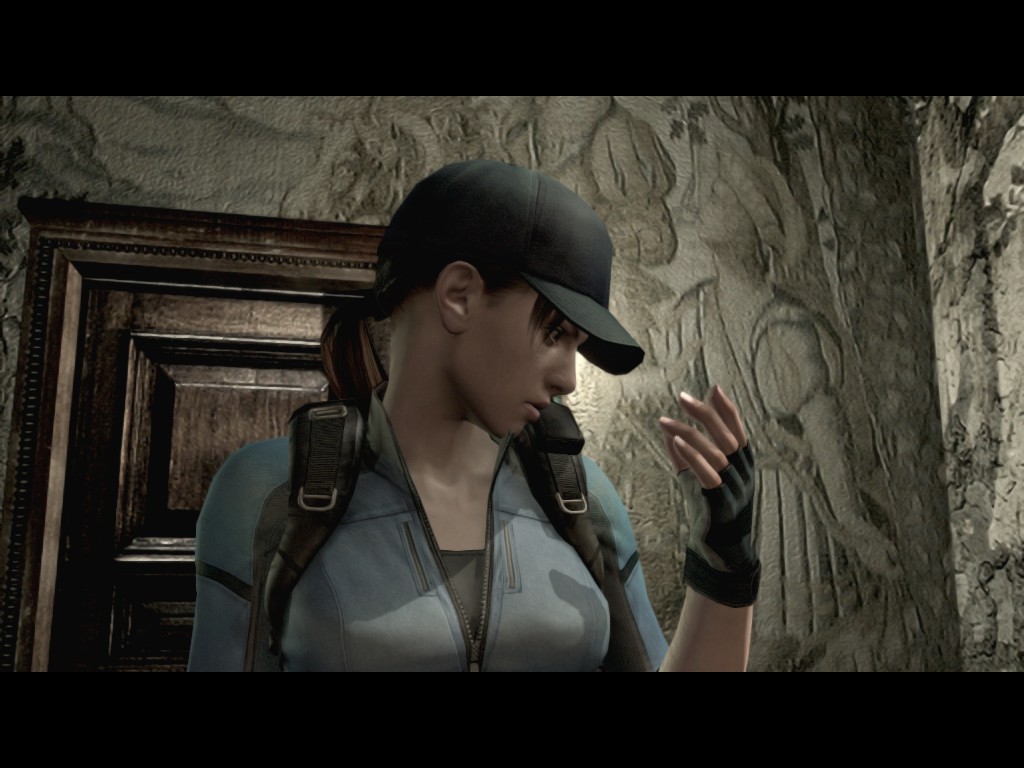 The save system is still as punishing as ever. Unlike the automatic checkpoints and save-wherever-you-want format that the kids enjoy today, in the old days we had to look for typewriters and then hope we had enough ink ribbons to make a save. Then we would forget to put the ribbons back in the item box and curse our poor planning later when we had too many green herbs to collect. The amount of ink ribbons technically limit how many saves can be made in a playthrough, but even lazy explorers should be able to find enough ribbons to save frequently. The worst case scenario is making good progress, solving puzzles, collecting a lot of goodies and killing a lot of monsters, and then dying on the way back to the save room. It might sound tedious on paper, but in the game it can be extremely rewarding. Good planning and conservative item management are the keys to success.

The PC version has the old tank control scheme that early 'Resident Evils' were famous for as well as an alternate "modern" control scheme. With the keyboard and mouse, movement and aiming are a chore. There is a 180-degree spin button, but otherwise it alternately required finesse and awkwardness to make the character do what I wanted. I highly suggest playing with a controller, as the PC version has full controller support. With a controller I could use the modern control scheme, where pushing in a direction on the stick moves the character in that direction. Sometimes the old ways are good, but I for one am quite happy to move past tank controls. 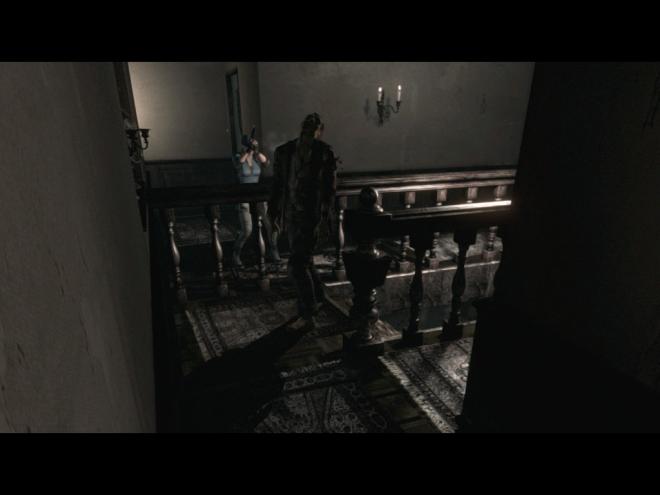 'Resident Evil' is presented in both widescreen and the original 4:3 aspect ratios, which can be switched at will. The PC version runs at 1080p and 60 fps, but the framerate does experience mild to moderate dips on occasion. The game retains the GameCube’s 3D models on a static background. The models have been upgraded with higher texture detail (geometry uptick) with more contrast in coloring, and particle and lighting effects have been improved considerably. Character movement looks quite natural for a 14-year-old remake of a 19-year-old game. Some of the backgrounds are enhanced, but others look ancient and shabby. 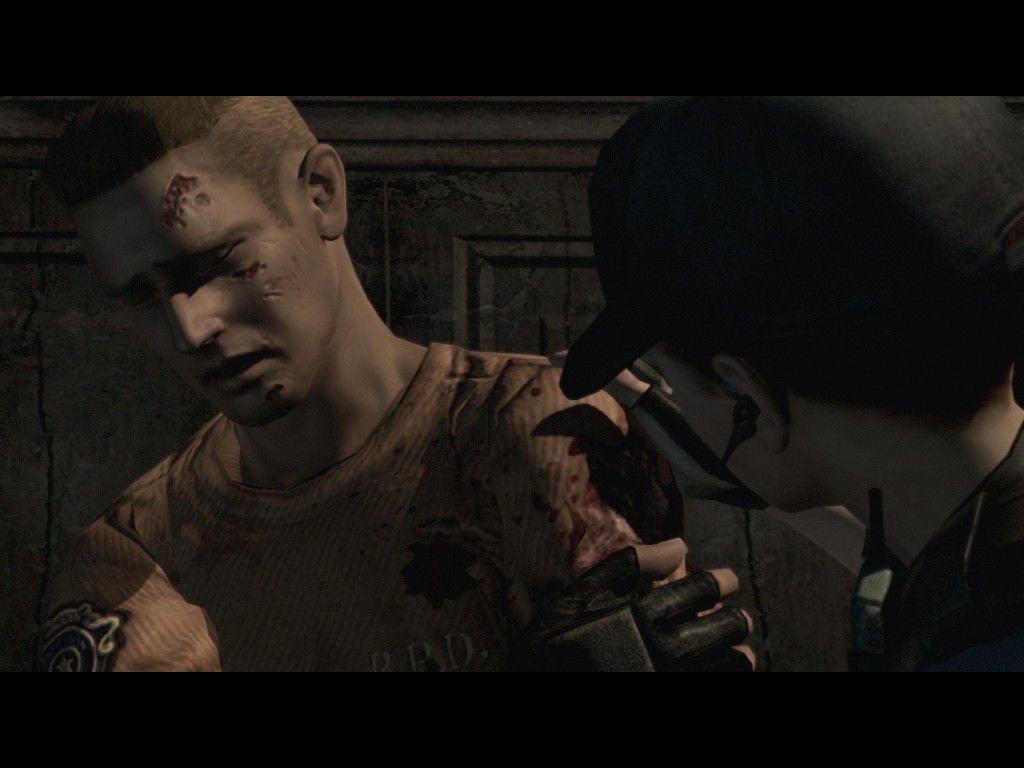 It is with great sadness that I report that this remaster uses the Gamecube’s voice tracks, which makes sense but also leaves out the awesomely bad translations and acting from the PlayStation version. There is a silver lining. Much of the "new" dialogue and acting is still very cheesy in a classic B-movie kind of way. The tirelessly cheerful Barry Burton is the best.

This remake has cleared up and improved the audio channels for a clearer sound as well as added proper 5.1 support. The music is minimalist and only picks up for jump scares, cinematics and the like. Usually the mansion is very quiet, with only the character’s footsteps and the occasional haunting screech, hungry moan, or perfectly timed blast of thunder to remind me that the house is not abandoned. I highly recommend playing in the dark and with the volume turned up, preferably with decent headphones.

Completing the game offers up new playthrough options, like Real Survival that disables auto aim and the teleportation abilities of item boxes. One Dangerous Zombie mode has a zombified police officer following the player around with grenades attached to his body. Beating the base game on Hard mode unlocks Invisible Mode, an even scarier variant where enemies cannot be seen, only heard. The Steam achievements also offer rewards for the "game within a game" lovers, such as speedruns. 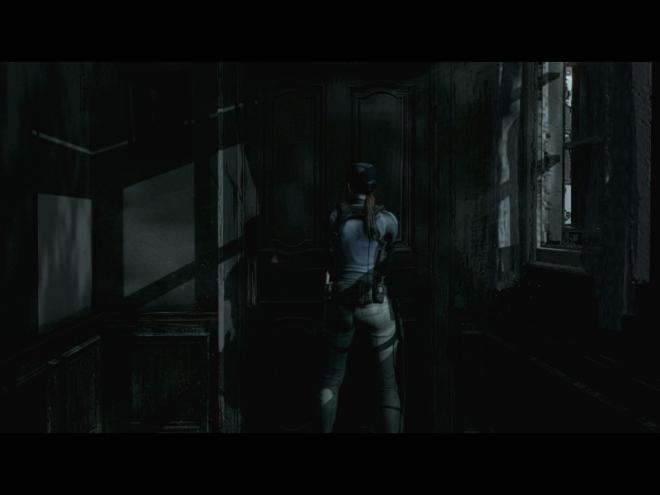 As we retire old consoles and with them our beloved old games, I can appreciate the re-releases that spring up with every new generation. Well, some of them at least. Some are well done, others are rehashed cash grabs. This 'Resident Evil' remake is more of the former. First-time players won't know what's changed, but will get an education on an enduring classic. For veteran 'Resident Evil' players, the lack of new content prevents the game from becoming a must-own title, especially at its relatively high price point.