The Game Itself
4 Stars
The Video: Sizing Up the Picture
4 Stars
The Audio: Rating the Sound
3 Stars
Replay Factor
4 Stars
Bottom Line
Recommended

Xbox One disc version reviewed.  Some portions of this review appear in our review of the PS3 version.

From the early days where a "a winner is you" on the NES' 'Pro Wrestling' to the breakout success of the N64's 'WCW/nWo Revenge' the wrestling game has been its own sub genre and for nearly two decades now fans of the sport get in a buzz each year in anticpation of the next game and year of pro wrestling. For quite sometime, Yukes had the monopoly on the WWE license with their long running 'Smackdown vs. Raw' series, until 2K Sports took over with the buzz worthy 'WWE 13.' For all the complaints of the Yukes entries growing stale, 2K managed to counter with an enhanced game engine and more importantly, a story mode built on nostalgia. 'WWE 13' featured a great recreation of the Attitude Era highlights and last year's 'WWE 14' was a trip through WrestleMania's greatest moments. With so much going in its favor, to call the PS3 version of 'WWE 15' a crushing disappointment is the understatement of the year; adding up to little more than a roster update, with slightly less than stellar graphics and numerous established features stripped out with no regard, the best aspect of the PS3 version of 'WWE 15' as a game was not being as monumentally bad as the old ECW games from nearly two decades ago. Enter the next-gen edition of the title; released a month later and promising to utilize the Xbox One and PS4 to do what the 360 and PS3 no longer could do. With a tall order to fill, are gamers burned once already willing to give it another shot?

While familiar in many parts, the controls of 'WWE 2K15' are, visuals aside, the first thing gamers will notice out of the box when stepping into the virtual squared circle. The addition of the chain wrestling mini-game pushes the focus more on recreating an authentic experience; at its core, it's little more than a rock-paper-scissors mechanic that quickly morphs into an analog stick dependent mini-game that is very similar to the lock picking mechanic of almost any stealth title: move the stick to the sweet spot and hold it as your grapple meter fills, but with the added twist of beating your opponent to the punch. From there it's business as usual, although the completely revamped stamina system changes the flow of matches for the better. 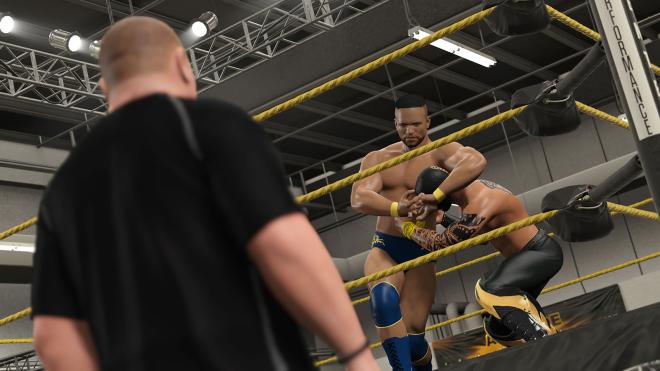 Gone are the days of merely hitting high impact move after move, trying to get your opponent into the red zone. Each wrestler has a stamina level and the flashier or powerful your move is, the bigger chunk of your stamina bar it will eat up. Couple that with the momentum system that rewards variety more than repetition and you'll find yourself in some very realistic scenarios. As I was progressing through 2K Showcase, I found a point in a match where I gathered the momentum to give John Cena the GTS; while my move was a success, it ate up the last notch on my stamina bar and CM Punk dropped to one knee to catch some wind before crawling to make the pin.

Jumping over to this year's story mode, 2K Showcase, and you'll quickly find a game crumbling at the seams. Gone are the hearty trips down yesteryear; in its place are two paltry offerings of John Cena and CM Punk's 2011 feud and an early 2000s era feud between Triple H and Shawn Michaels. The overall number of matches in each Showcase is noteworthy, but it quickly becomes a slog given the so-so production value. There's never a sense of urgency or importance to the matches presented and the historical context is paltry at best; only by knowing the significance of key matches from actually watching them unfold, did I find myself invested. Likewise if you don't care for Cena, Punk, HHH, or HBK, than 2K Showcase is going to leave you feeling very cold, as it lacks the breadth of Road to Wrestlemania or the Attitude Era from year's past.

While the last-gen systems got Who Got NXT to make up for a lack of career mode, on the Xbox One, 'WWE 2K15' comes with a fully formed, albeit generally simple, career mode dubbed, 'MyCareer.' Spend some time creating your wrestler (more on creations in a bit) and you'll find yourself at the WWE Developmental Center vying for a coveted WWE contract. From there, you'll work your ranks up through NXT to Superstars to Smackdown and finally Raw, with the option between events to earn some easy XP via training. The XP is used to increase your wrestler's stats as well as to earn in-ring specialties as well as managers. It's most definitely worth playing at least once, but isn't quite necessarily the greatest career mode I've seen in a pro wrestling game. 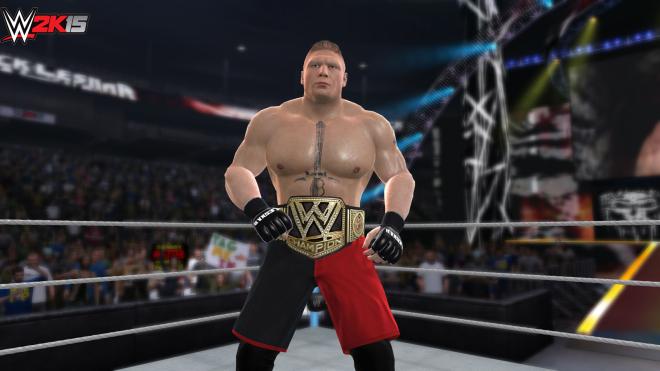 On the subject of career mode and created wrestlers, it's strongly advisable to create wrestlers separately. The creation suite is still a step-down from a few earlier installments on the prior generation systems, however it's nowhere near as anemic as the last-gen edition of '2K15.' Overall creation mechanics have been simplified, although when it comes to custom entrances, I found this year's offering to be much more manageable. Sadly, the inability to bring in custom music is still a bummer. To really get a created wrestler ready, it's going to take a few hours. When the wrestler is ready, it can be imported into the separate career mode. When doing so, users should expect to spend some more time redoing the move set, as the career mode requires progress in order to get access to flashier moves and abilities.

On a sheer eye-pleasing factor, 'WWE 2K15' is a marked step above its last-gen relatives. The improved scans really have a chance to shine on the new hardware and while not all wrestlers in the game were built off these new scans, even the updated models from years past have more of a 'wow' factor than the PS3. The physics engine has its occasional glitches, but visually, things are more a step in the realm of true realism. The game runs at a steady framerate without any noted hiccups or slowdowns and the vibrant colors are the icing on the cake that make this a notable experience. 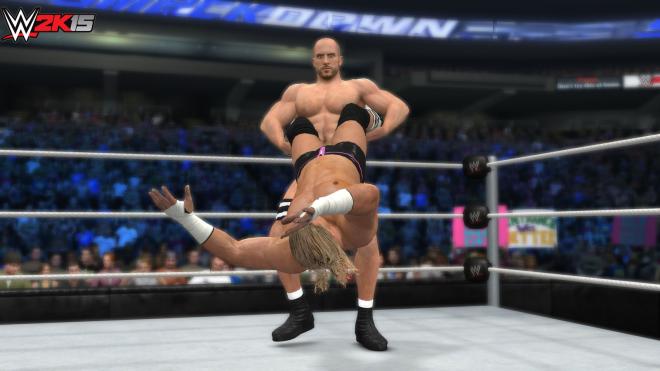 Audio wise, 'WWE 2K15' is still all over the place. I've always had personal issues with sound mixes in wrestling games and this is no exception. General exhibition mode matches features a finely balanced aural experience, from entrances themes, to crowd noise and commentary, it's a great replication of a WWE event. The 2K Showcase on the other had, seems like it draws from archival footage at times, and the newly recorded commentary from Michael Cole and Jerry Lawler feels disjointed and separated from the action. Speaking of commentary, another feather in the cap for '2K15' is commentary that is far less repetitive than year's prior, but after tuning this necessary but inconsistent feature out for years, players might not notice the more natural delivery and production value. As previously mentioned, one of the key sound features of year's prior, custom soundtracks, has been removed, and frankly the generic custom music options don't even begin to come close to having free reign.

While the 2K Showcase and MyCareer will get a decent number of hours of gameplay out of most players; those not content with making fantasy matches against the computer will want to venture online. This year's offering is no more refined than year's past and there are still issues with lag; bottom line, it's no substitute for local co-op or competitive play and without the ability to create custom storylines, carrying out exhibition matches on a game that doesn't feel quite as robust as it should be or past entries have been, is going to wear thin, fast.

As in years prior, the DLC offerings promise new characters to bring into the game and insultingly, more 2K Showcase offerings. In all three new 2K Showcase entries are slated for release as DLC, including one focused on the career of the Ultimate Warrior. With such an anemic offerings to begin with, I'm not entirely sold on shelling out $25 to get more. That said, the Xbox One version of 'WWE 2K15' is a huge improvement over the PS3 offering and while it won't completely replace 'WWE 13' or '2K14' due to their stellar rosters and single player historical modes, this edition will be staying in my collection for at least a year. 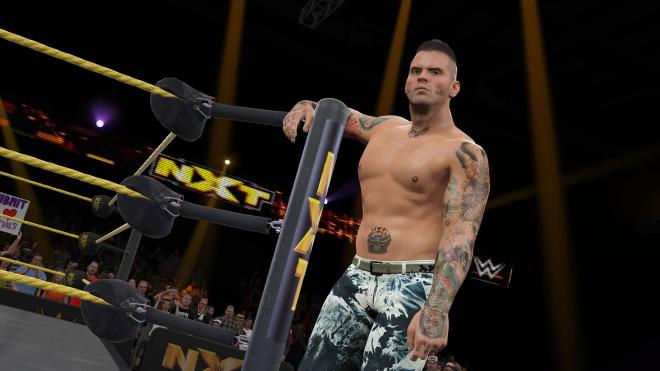 'WWE 2K15' might not be the best installment in the franchise, but for it's Xbox One debut, it's definitely a worthy entry. From the enhanced graphics to the very impressive stamina system, the series finally feels more authentic to the sport of professional wrestling. 2K Sports definitely needs to up their game next year by adding in missing features and expanding the creation suite, however for the next year, 'WWE 2K15' is going to do just fine in scratching the pro wrestling itch. If you've already been soured by the last-gen offerings, do yourself a favor and give this edition a whirl; it's the real deal and is recommended.