iOS
For Fans Only
3.5 stars The Game Itself
3.5 Stars
The Video: Sizing Up the Picture
3.5 Stars
The Audio: Rating the Sound
3 Stars
Replay Factor
4 Stars
Bonus Content
3.5 Stars
Bottom Line
For Fans Only

Converting physical board games to digital versions is becoming more and more common. Considering the functionality and portability of a tablet, this marriage seems like a near perfect fit. Integrating the rule's intricacies and nuances into a package that accommodates for quick play sessions is an option that I expect owners of iPad devices will continue to see more of in the future.

The past few years, board gamers have seen a number of video game titles hit their tabletop. From 'Gears of War' and 'Bioshock: Infinite', to 'Civilization' and 'Starcraft', this transformative popularity continues to rise. One recent addition is based on CD Projekt Red's forthcoming release of 'The Witcher 3: Wild Hunt'. Appropriately titled 'The Witcher Adventure Game', this digital board game is based on the physical version recently developed by one of the more notable companies in the industry, Fantasy Flight Games. As popular as this method has become, I'm fairly certain that 'The Witcher Adventure Game' is the first iPad game to be based on a board game, which is based on the award-winning video game series, which originated from a series of best-selling novels that began in 1992. Although the concept of 'The Witcher Adventure Game' may have deep roots and a long development path, is the final product worth the effort?

'The Witcher Adventure Game' accommodates for 1-4 players and provides an opportunity to assume the role as one of a variety of popular characters from the franchise, including Geralt of Rivia – Monster Hunter, Triss Merigold - Sorceress, Dandelion – the Roguish Bard, and Yarpin Zigrin – Dwarvin Warrior. Establishing a game is simple and intuitive and allows for local pass-and-play, as well as online multiplayer. However, as of the writing of this review, my repeated attempts to experience the online functionality have gone unfulfilled; searching for other available players has consistently been met with failed results. 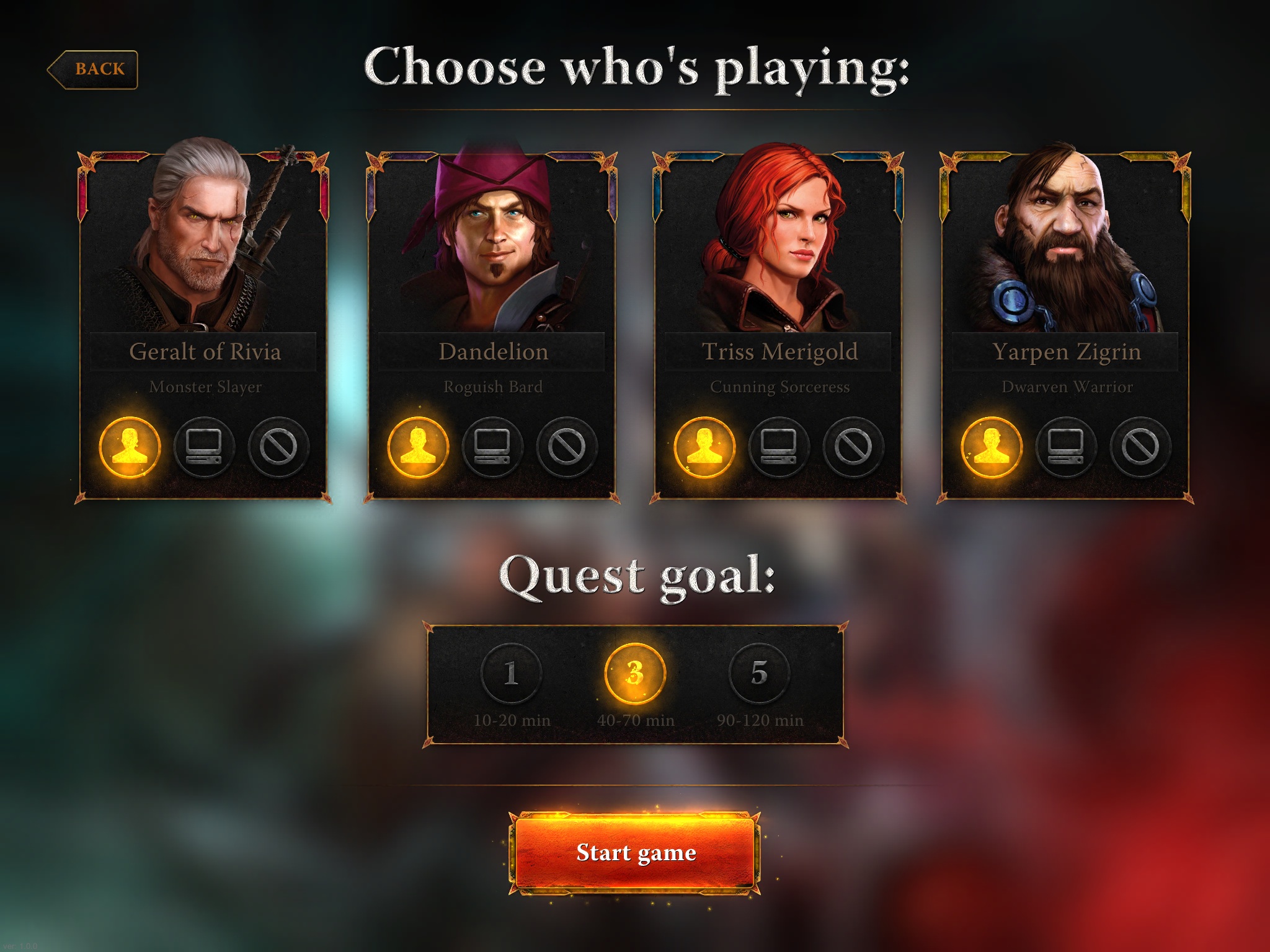 That's not to say playing 'The Witcher Adventure Game' offline has been any less interesting and enjoyable. Beginning a new game is as simple as selecting the character(s) you would like to play as, and assigning any number of the remaining characters as computer-run AI. It provides a nice opportunity to experience each of the four characters – and their unique skill sets – separately.

At it's heart, 'The Witcher Adventure Game' is an RPG that tasks each player to gain victory points, manage resources, and be the first to complete a predetermined number of main and side quests. Depending on the number of players, as well as the selected number of main quests – one, three, or five - dictates the length of the game. An average playthrough of a two-player game with three main quests to complete can last between 45 minutes and an hour. 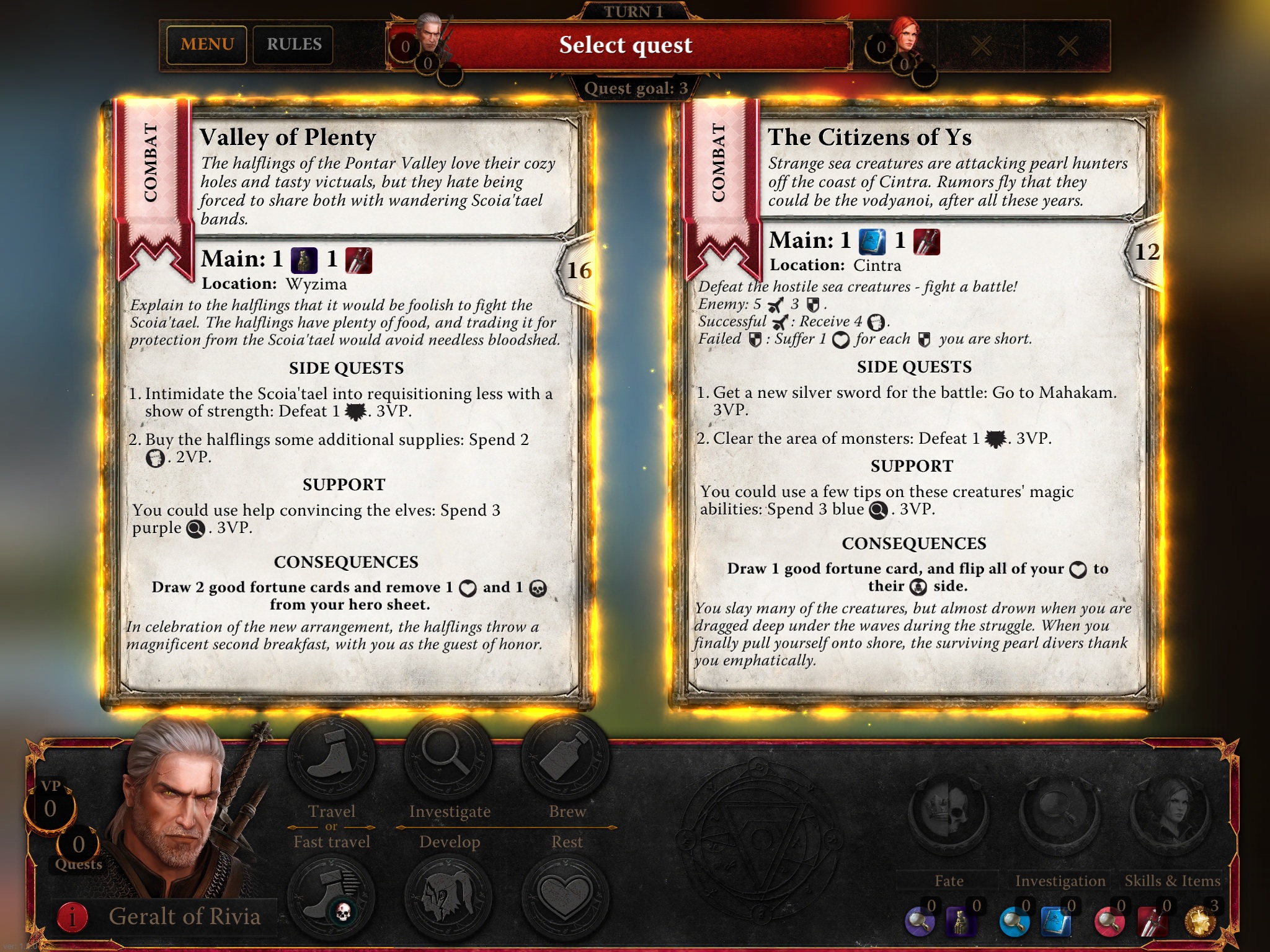 But how does the game play?

In an attempt to avoid becoming too rules heavy, 'The Witcher Adventure Game' allows each player to select two actions during their turn: travel, investigate, rest, develop, or prepare. No single action can ever be utilized more than once per round, and each action can become blocked by wounds that will inevitably be received from battle and the Foul Fate that spreads across the land.

During this extremely thematic journey, players travel across various regions, conduct investigations, gather evidence, earn gold, fight creatures, and develop characters. During creature encounters (of which there are many), virtual dice are rolled using the game's three action dice, in addition to the unique set of dice that each character has available to them. Choosing the right path to travel and selecting the most appropriate quests to undertake comes down to understanding and playing to the selected characters' strengths: Dandelion is an entertainer and is better off avoiding conflict at all cost, while Geralt faces combat head on; Triss relies on magic to succeed, and Yarpen has a band of fellow travelers to help him along his journey. 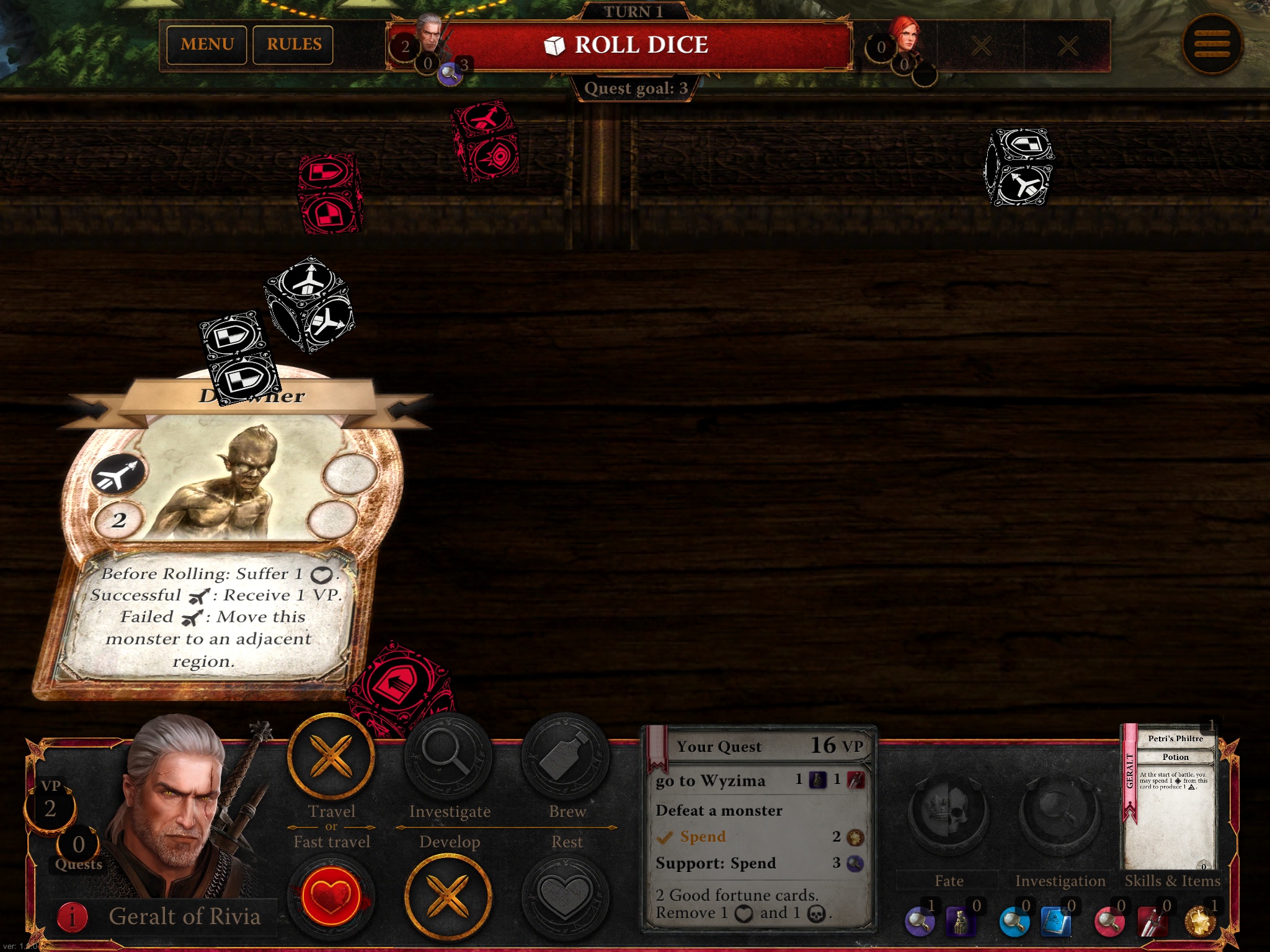 Initially, 'The Witcher Adventure Game' may come across as a bit overwhelming to the uninitiated board gamer. By the end of the game, strategy easily overcomes uncertainty, and the thematic nature of the characters and their adventures will fully immerse willing players into the world of 'The Witcher'. 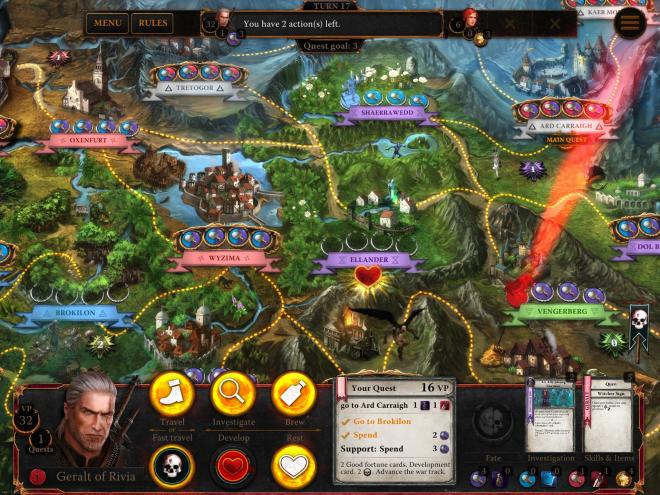 As is the case with most of the titles developed by Fantasy Flight Games, 'The Witcher Adventure Game' is exceedingly well presented in terms of both the artwork and overall layout. The board is grand in scale, nicely detailed, allows for rotation through standard swiping gestures, and highlights objectives for easy identification. Simple animations overlay the board – snow blows from the mountaintops and winged creatures watch over a variety of regions - adding to the overall fantasy theme.

Unfortunately, during every game session I encountered at least one instance of a severe drop in frame rate, making the graphical presentation slow to a crawl. While never inhibiting gameplay, these instances only lasted for a few seconds before the game smoothed itself out. 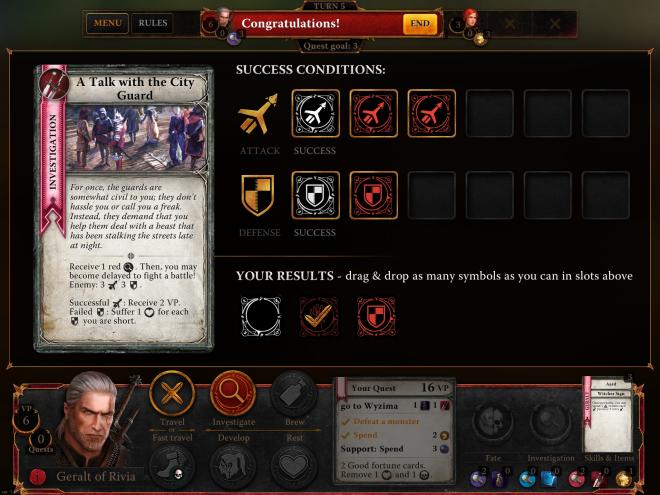 'The Witcher Adventure Game' could have benefitted from a dramatic voice-over option for the numerous flavor text cards. I imagine Ian McKellen (in his best Gandolf) lending his voice and adding an even greater amount of theme to an already thematic game. However, even without a proper voice-over, the renaissance-like musical score and repetitive sound effects for when a wound is taken or a creature comes into play, was used to average effect and prompted me to continually use my headphones with each game.

Any tabletop gamer that has experienced a game by Fantasy Flight Games understands that the amount of care and attention to detail provided with their titles almost always accommodates for a great deal of replayability. The high number of individual quest and character development cards, as well as the randomness of the dice and monster tokens, is reason enough to keep 'The Witcher Adventure Game' close at hand. Whether playing alone, or pass-and-play with up to three others (I'll eventually luck out with the online component), this digital board game has a great deal to offer. 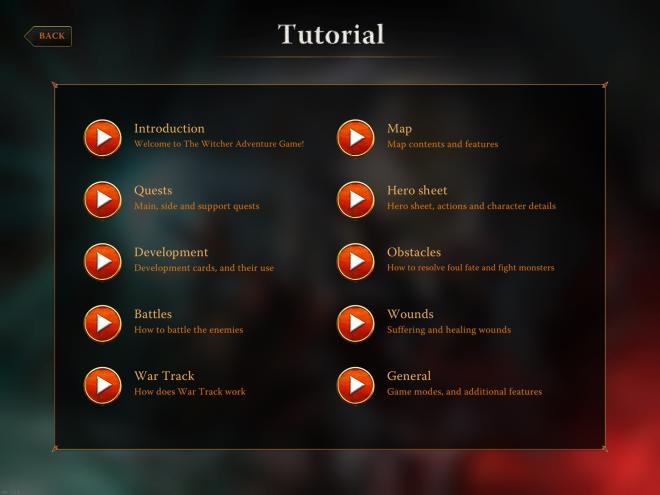 Fans of thematic (aka, Ameritrash) board games will feel right at home with 'The Witcher Adventure Game'. Those players new to the experience may initially feel overwhelmed. However, the iPad app allows for instant access to the rules, as well as highly detailed step-by-step video presentations of each stage of the game. Anyone that has ever visited Fantasy Flight Games online will instantly recognize this tutorial format.

Additionally, there is an in-depth list of possible achievements that can be gained during repeated playthroughs of the game. I suspect that this is another thread linking to the forthcoming video game by CD Projekt Red and should make video gamers feel a bit more comfortable with the format.

Experienced board gamers will find a great deal to enjoy when playing 'The Witcher Adventure Game'. The art, flavor text of the many cards, and virtual rolling of custom dice all scream tabletop gaming. Those less inclined to sit down for a grand tabletop adventure might find this game somewhat slow and repetitive. Giving in to the theme and immersing yourself into the experience is a quick way to overcome any such reactions. Anyone averse to reading an abundance of flavor text to complete this objective should avoid this game at all costs. Those that can appreciate a grand adventure requiring a bit of player investment should give 'The Witcher Adventure Game' a look. Hopefully, it can tide series fans over until the new 'The Witcher 3: The Wild Hunt' release date of May 2015.