Xbox One disc version reviewed. Review was conducted using the day one patch.

Swedish developer Avalanche Studios made their name with the first two 'Just Cause' games before forming a second studio in New York a few years ago. While the main studio worked on 'Mad Max,' this new studio took up the reigns of 'Just Cause 3.'

'Just Cause' once more sees the free-wheeling, free-falling Rico Rodriguez enter the breach, dead set on removing an island despot. This time out, Rico is squared up against the forces or General Di Ravello. At stake is the freedom of Medici, which happens to be the home of Rico's youth.

This being 'Just Cause,' the key factors appear to be Rico's ability to traverse and cause chaos using not just guns and vehicles, but his trusty grappling hook (with tether ability), parachute, and wingsuit. Nicknamed 'Firestarter' in pre-release marketing, playing as Rico means causing explosions for reasons that could almost be described as "just cause."

As much as any year in recent memory, 2015 has seen a constant stream of openworld games. Writing as a player who tends to get openworld fatigue on a regular basis, this barrage of big maps and "player freedom" can be trouble. The term "sandbox" all too-often means running through a checklist of missions, sidequests, and collectibles.

With 400 square miles of Medici to play with, the world of 'Just Cause 3' is a hell of a lot bigger than say 'Batman: Arkham Knight.' 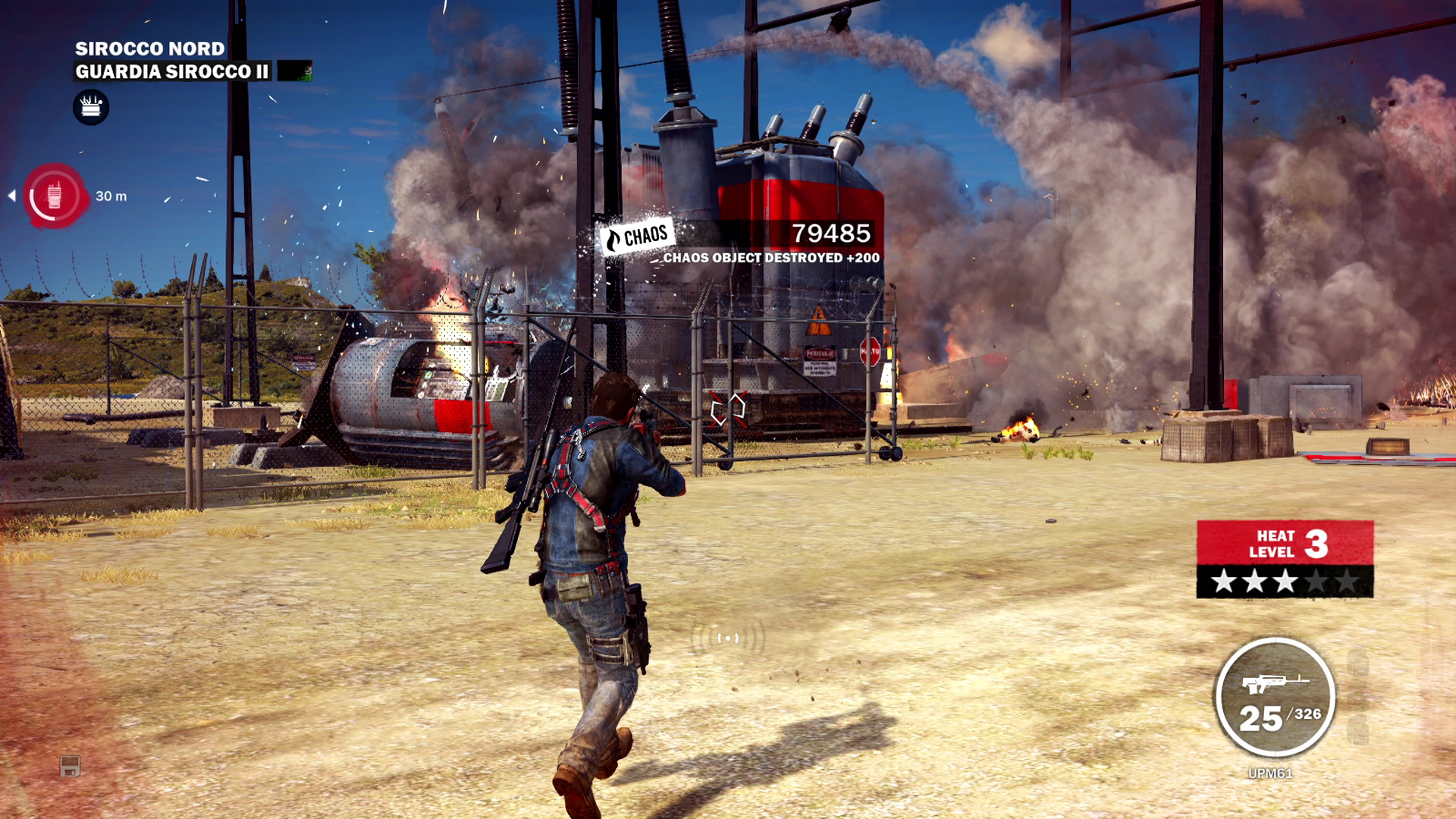 But before the player can even think about all of this largess, the game saddles the player with one of the worst tutorials/game beginnings I've played this year.

Here's where the intro fails. The load times are long in some situations (like the cutscene heavy intro mission), frequent. The story, as told by said cutscenes, is pretty forgettable. Finally, the intro is even poor at demonstrating how to control Rico. Rico Rodriquez isn't a stand-in for a 'GTA' character, or even for Ezio from 'Assassin's Creed II.' Rico is savvy enough with guns and with vehicles, and extremely durable to boot. (In contrast to my normal preference, I found full auto guns the way to go with Rico.) But to be successful with Rico, the player must learn the art of grappling and tethering. 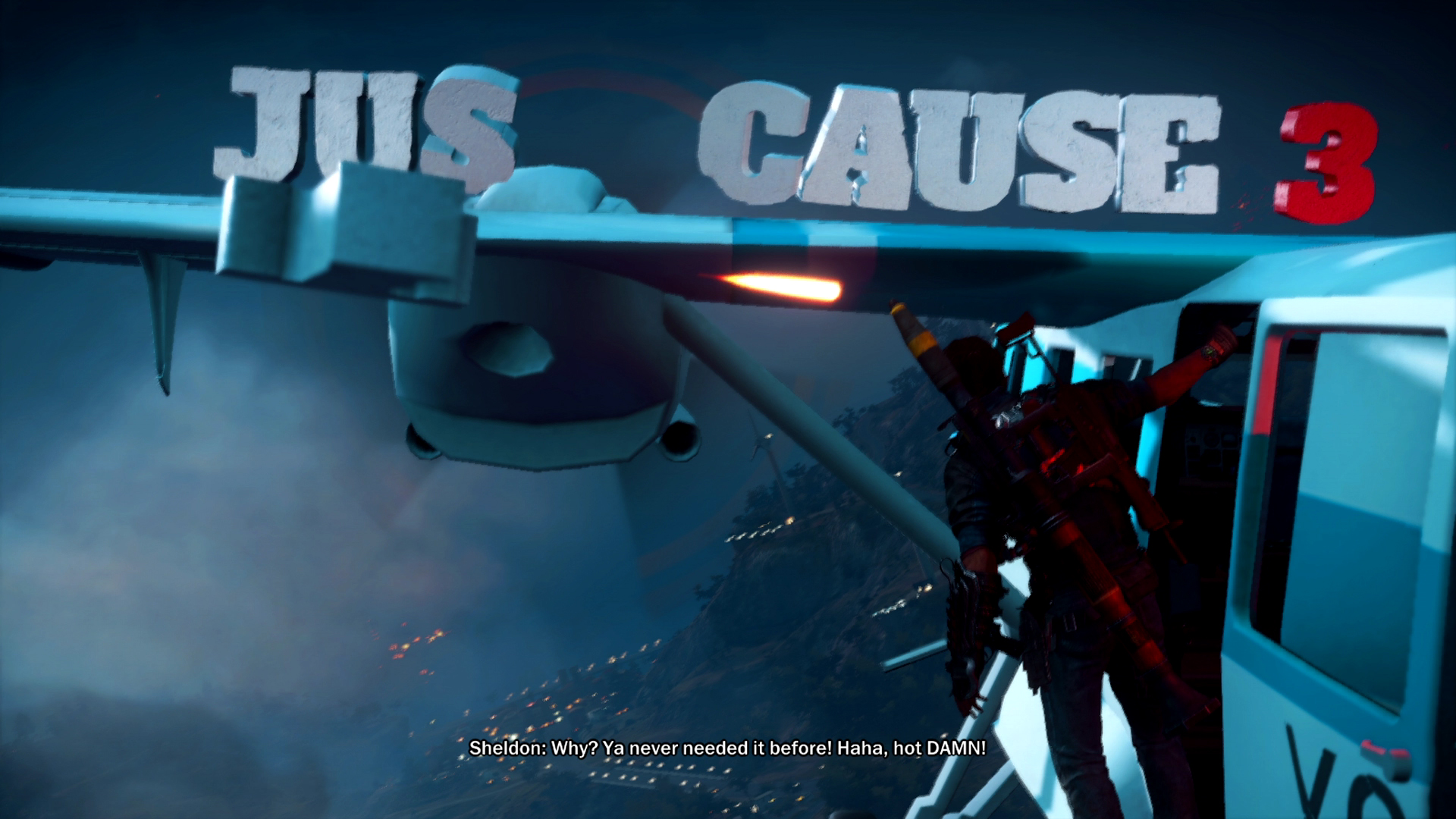 Rico can grapple (via his left arm and the left bumper) better than Spider-Man, and he can also tether things together. In an early mission, I decided to destroy some full tanks by dropping a truck trailer on them. All I had to do was use tethers to lift the trailer off the ground via an adjacent structure, move it over the tanks, and then let it go. This was pretty extreme (unnecessary on my part) and took some effort. A simple way would have been to tether an explosive barrel to the big fuel tank. Once reeled in, the barrel goes boon, the fuel tank goes boom, the tank next to it goes boom, as do any nearby bad guys.

Tethering takes some doing and can make the controller feel like it's short a few much-needed buttons. In an early encounter, a citizen asked me to move his car, which had run out of gas, to a nearby, but high up, gas station. Using tethers, I promptly flipped the car over and blew it up (by accident).

Indeed, this is a world in flames, and ridding Medici of anything tactically controlled by General Di Ravello (for war of propaganda) is always job one. Doing this creatively is up to the player.

Early on, I got access to a helicopter with twin fixed guns, which I could call in via supply drop on a cooldown basis. 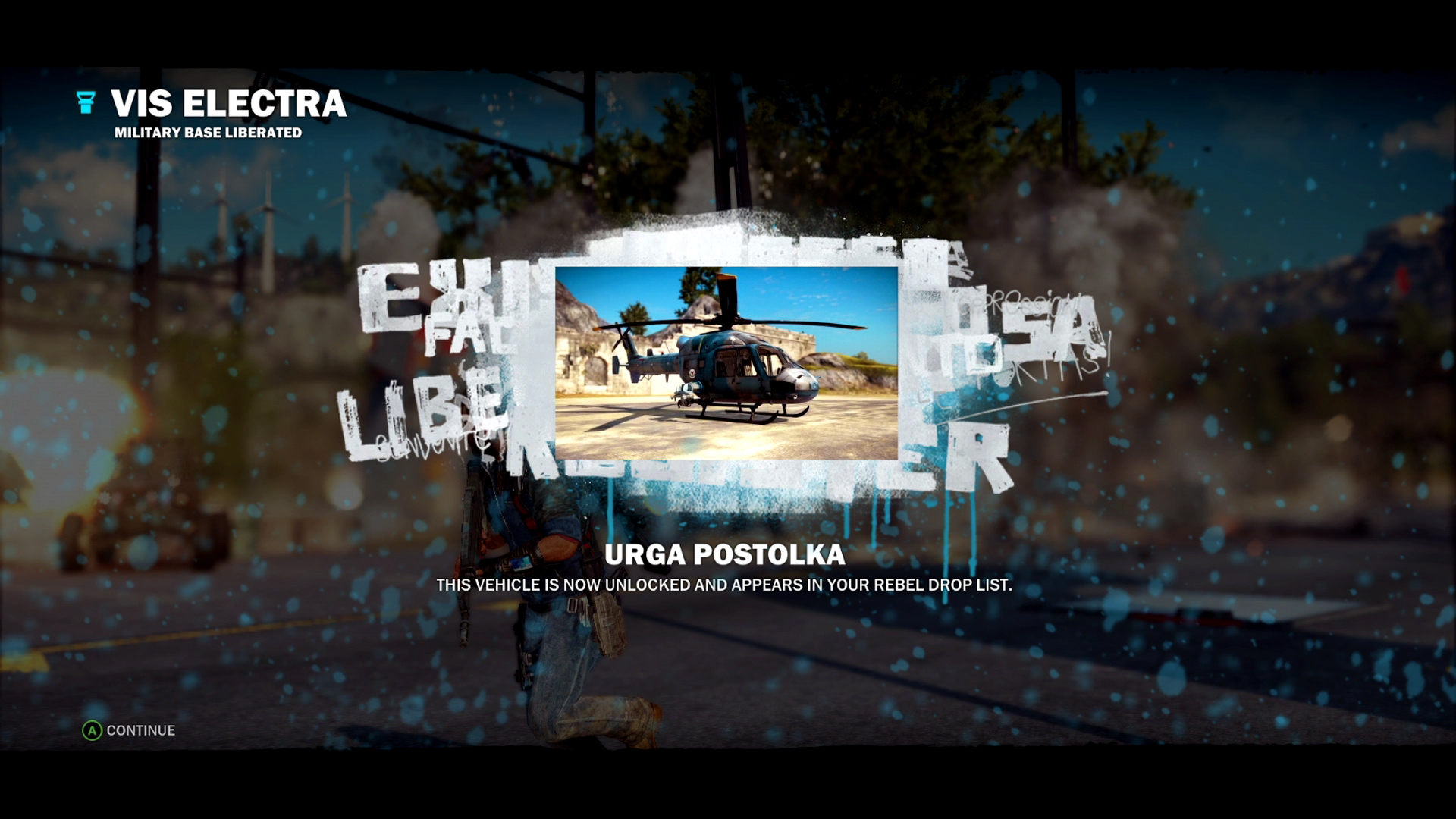 Thus, I could slip into a base, take over the SAM launchers one by one (which then dutifully attack and destroy enemy aircraft), and then pilot my chopper and blow up all of the chaos objects. Of course, taking over the SAM sites meant having to run around the base, and just as often, I would elect to use Rico's infinite C4 supply to destroy everything while on-foot.

Rico's mad grapple, parachute, and wingsuit skills are useful for getting around, especially before I unlocked fast travel. 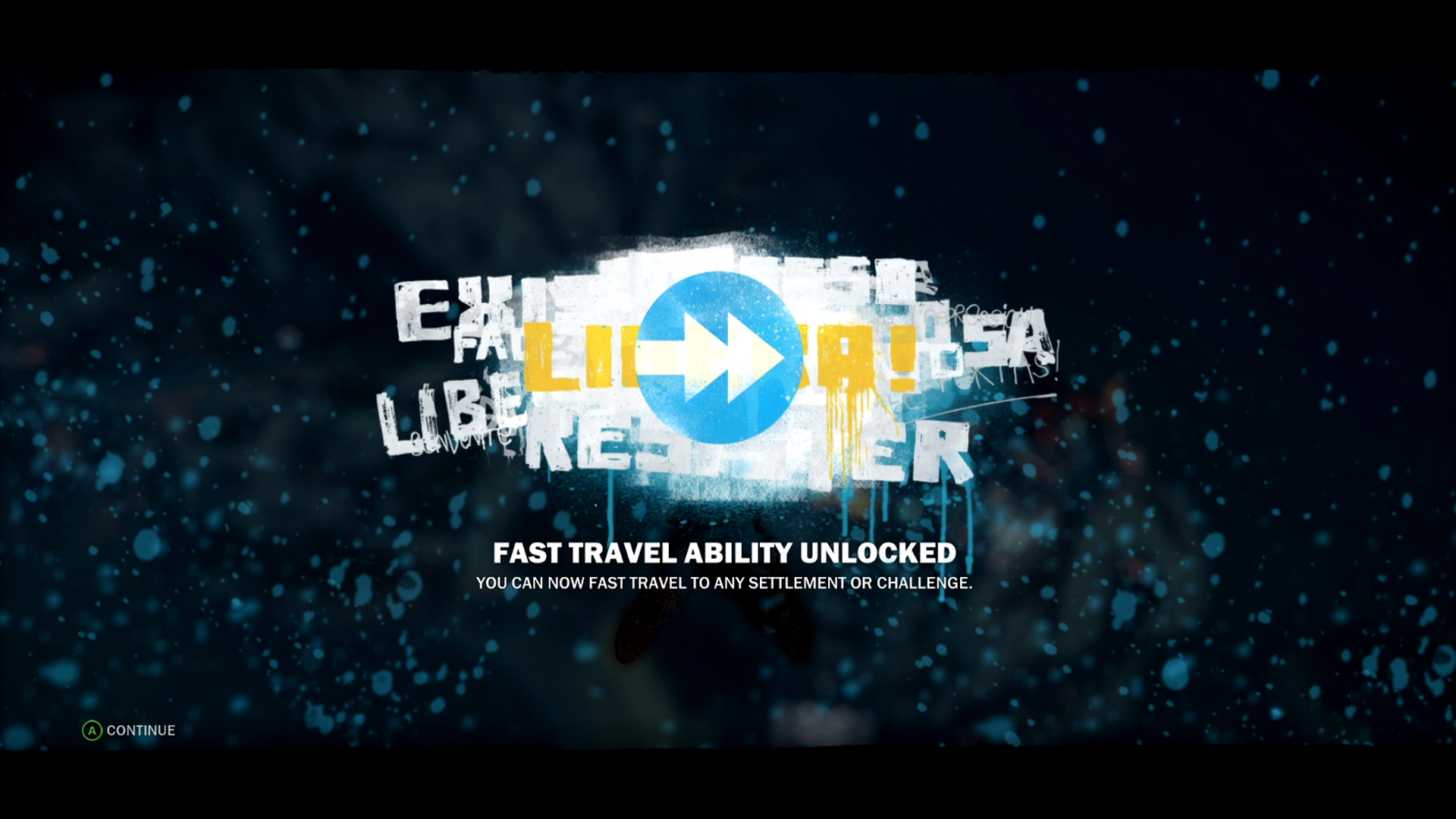 The wingsuit wasn't easy for me to grasp, but going into the various challenges and really learning how to control the wingsuit helped loads. Thus, I was able to do things like face a Corvette ship that was fixed in on me with its big deck gun. By grapple/fly/parachuting to the ship and to the cabin, I took control and turned that big gun onto a fleet of choppers. Next was a whole port. I hopped out to open a road gate for my rebel buddies, and then hopped back in to take on the base's commander. 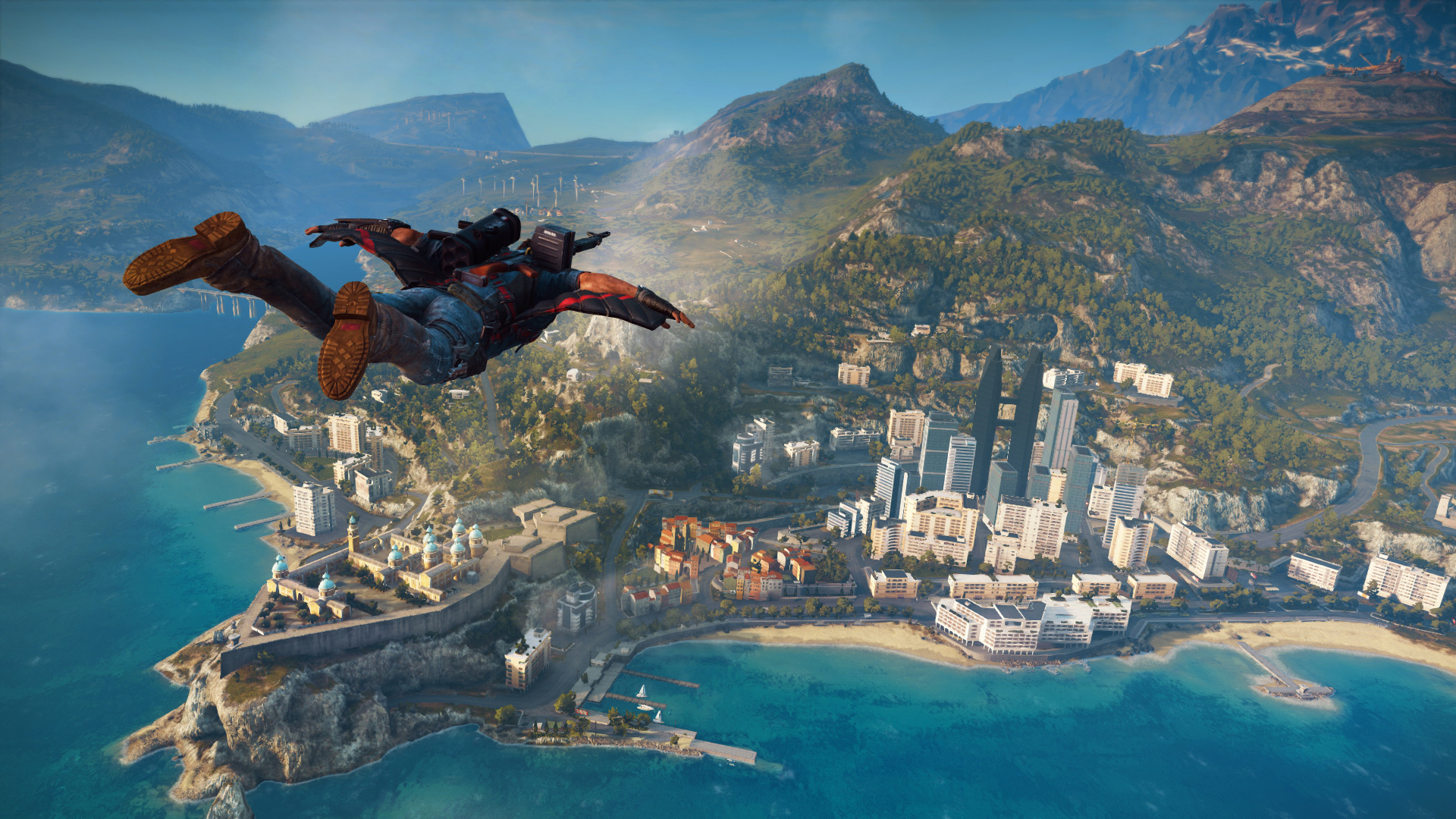 The combination of grapple and cover-based health is pretty amazing, if unpredictable. Plenty of times I meant to grapple into a soldier, only to aim just past him and thereby arrive ready to be shot. Jumping fences, balconies, and multi-tiered towers was essential for me. Even main missions had me grappling from vehicle to ground to vehicle to keep up with convoys. I enemies, vehicles, and fixed guns surrounded me, I could just grapple away and catch my breathe.

I had no problem grappling to an enemy tank, taking it over, and destroying the other mission target tanks. (This left me to C4 the tank I had taken over initially to finish the mission.) There were times when flying enemy vehicles freaked me out (I tend to carry a sniper rifle instead of an RPG), only for me to remember that I could just hijack them and bailout.

For better or for worse, however, making the most out of Rico requires getting Gears, which are rewarded for completing challenges. Doing so will unlock a few things that players might have been right out the gate. Likewise, many of the base vehicles are horrendous to drive. And yes, the main missions are important for unlocking things as well. I can see how many players would quit in the first hour or else, set out to free the whole of Medici using very vanilla cover-based shooting. 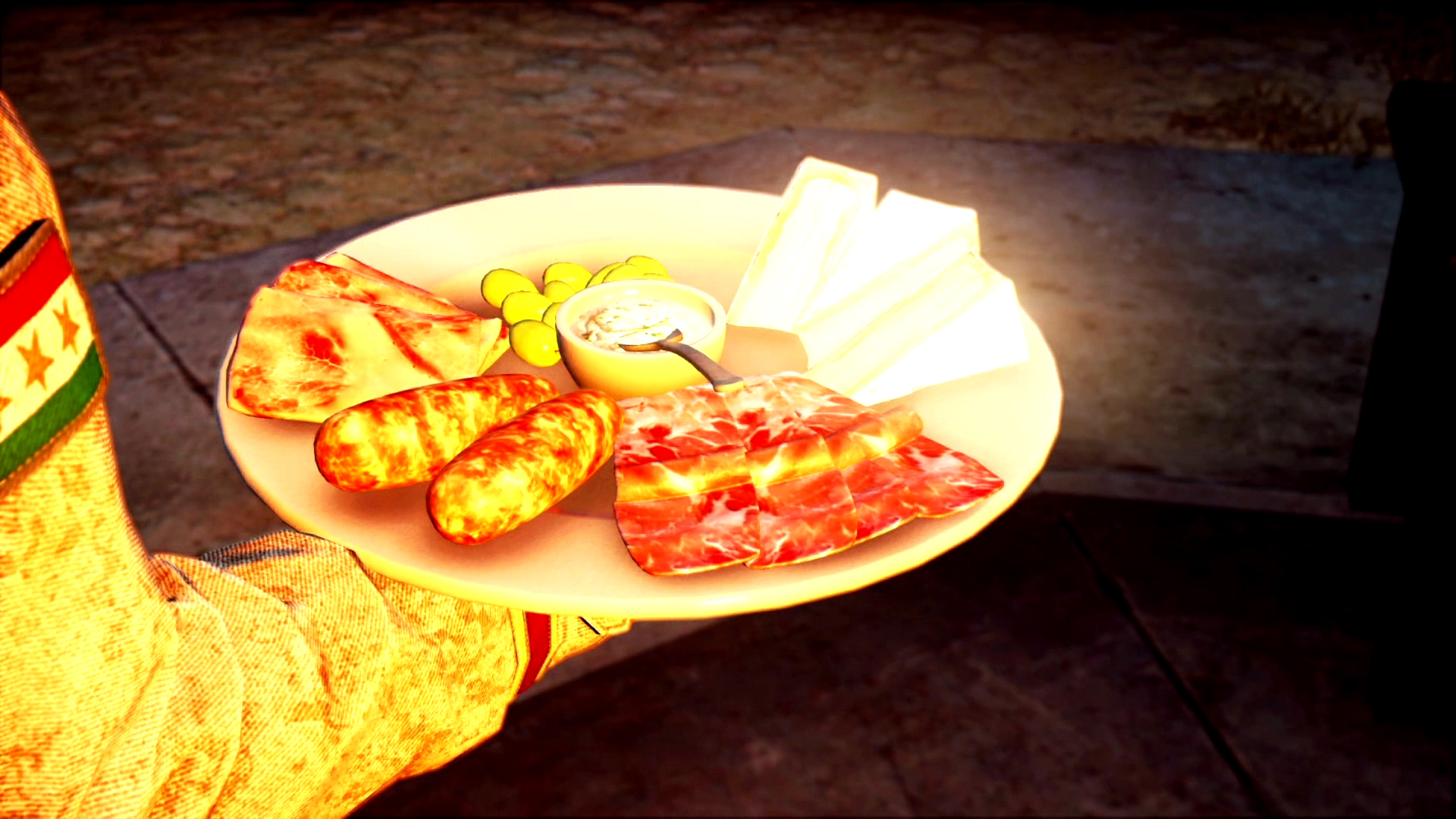 Although I found the story to be mostly throwaway, I found the game's physics to be never-ending fun. Even when a collapsed water tower hid an objective, or I grappled into a telephone pole, or when doing laps I smashed into the vehicle I had abandoned on the previous lap, I was smiling at the B-movie essence that pervaded. In a world without 'Mercenaries,' this series is a bit more appreciated. 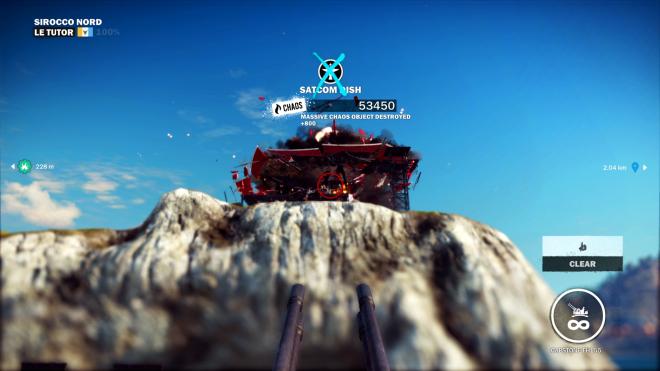 On the Xbox One, 'Just Cause 3' is very two-faced. There are artifacts of one sort of another in every combat zone, and all of those military installations tend to have a muted color scheme outside of the chaos red stuff. Framerate is unsteady, but I didn't experience hitching. The map isn't just big; it's also very tall.

Still, the game can look good, and happily, accessing the map and other in-game menus is a snap. It's too bad there's now dedicated photo mode.

When I began my review, the Square Enix servers that backed the game's leaderboards were unstable and caused some gameplay issues, prompting me to play offline. Fortunately, these problems were eventually corrected. In the early mission with the Heat Exchanger doors, I managed to grapple into some box collision. 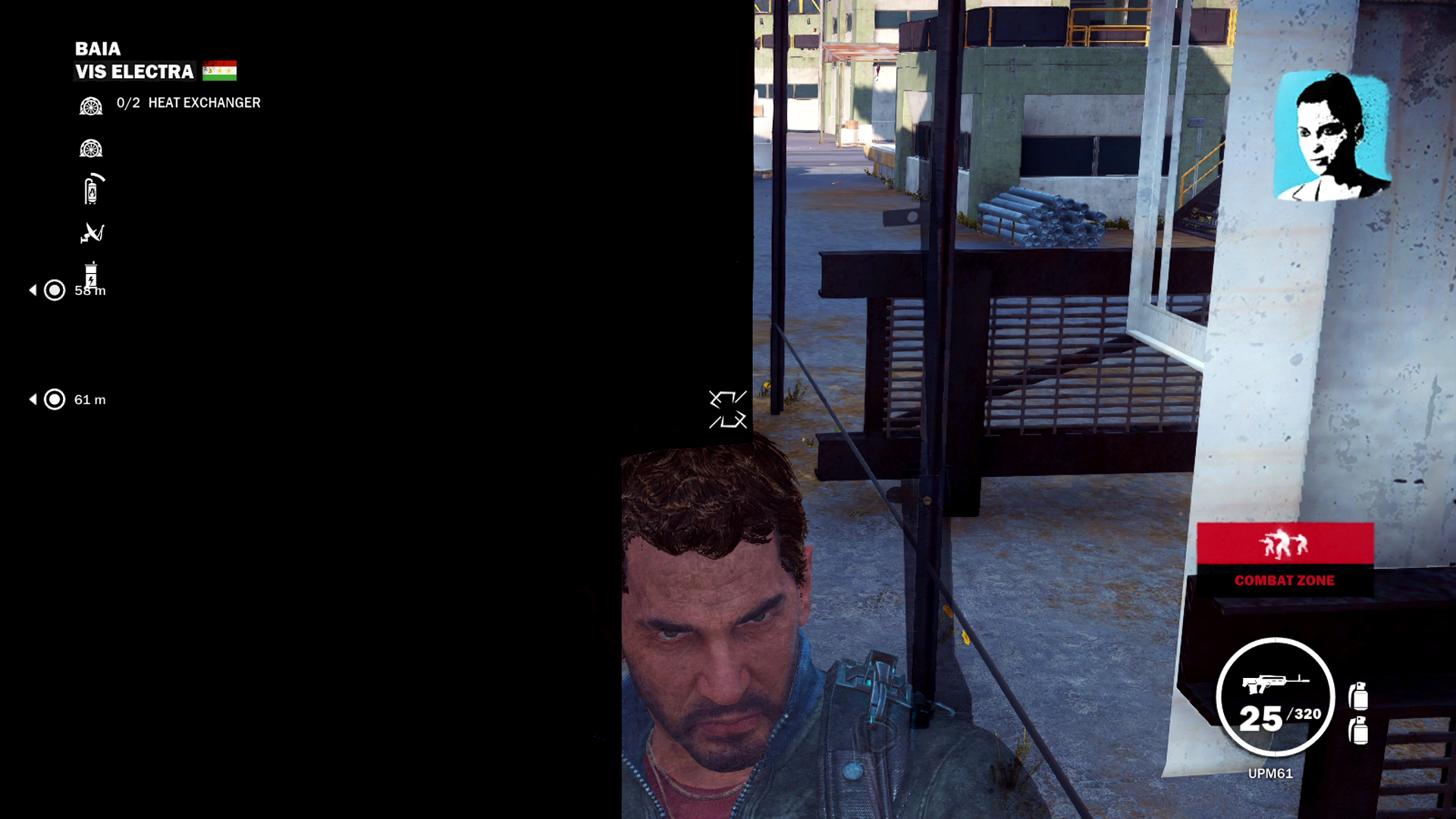 After some struggle, I was able to escape. All in a day's work for Rico. 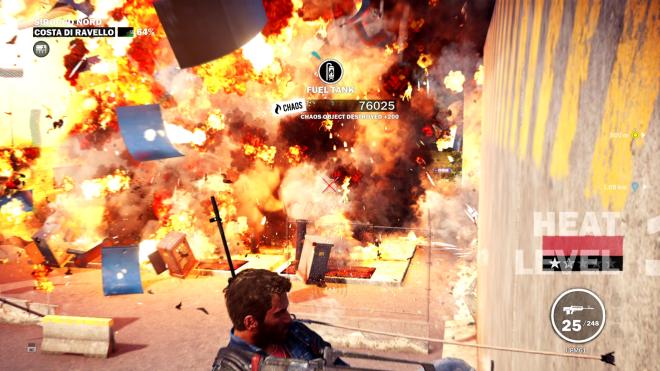 Medici has pleasant ambience to it which is only occasionally sullied by a cutscene. The voice acting overall is fine, with the individual characters being more endearing than the plot. The in-game radio broadcasts, which feature a wonderful stilt on the destruction caused by the player, are voiced by David Tennant, and he nails the perfect ridiculous tone.

The sound field is pretty tame, which is fine, what with all of the destruction, but surrounds are engaged. The citizen chatter, which sees people praising Rico in response to his hijacking of their personal ride, is light and hearty. 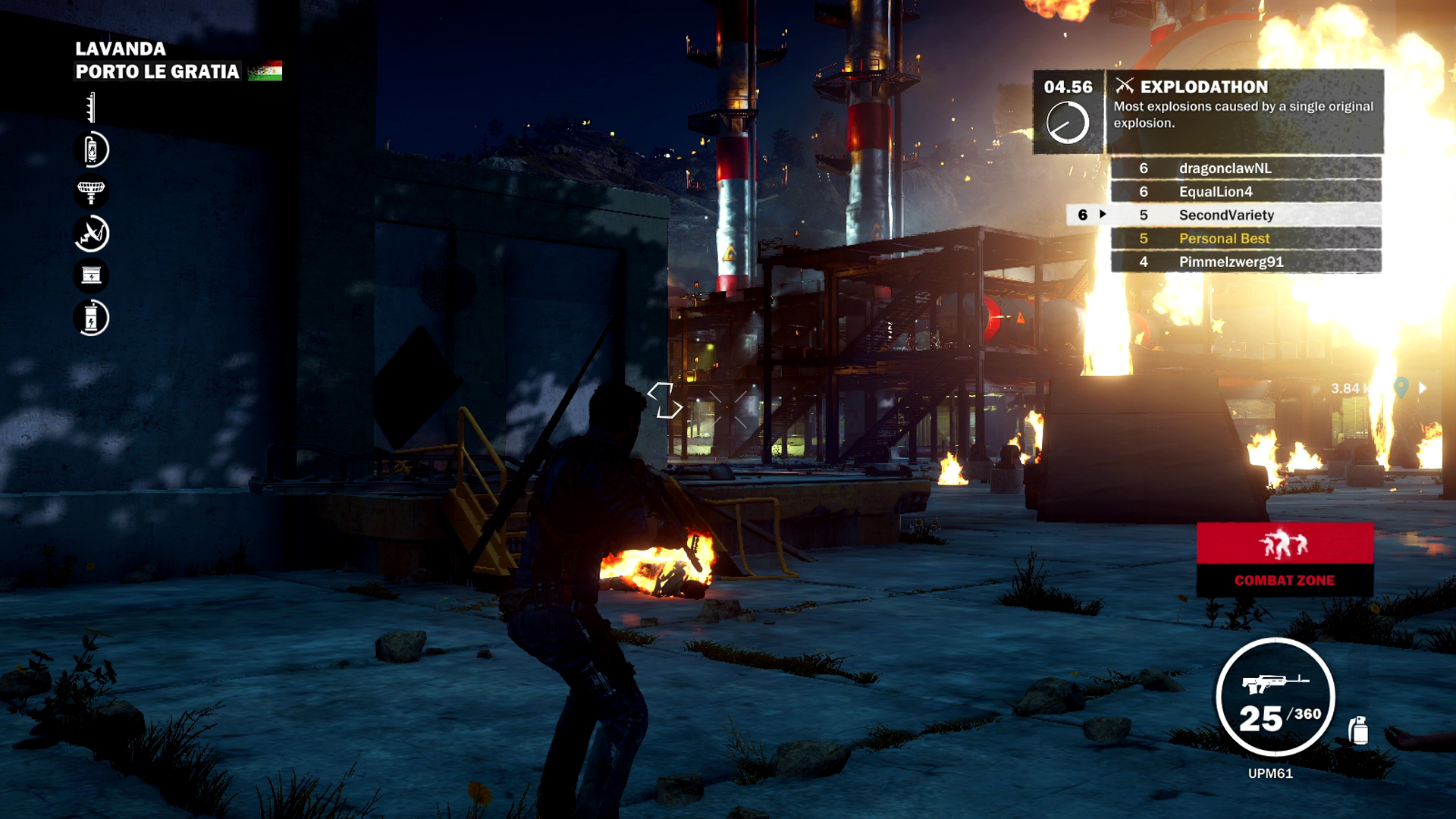 Again, I think a lot of players will check out early, possible after driving a terrible car, but those who stay will find a streamer's dream game. The game actively encourages the player to say grab a car, floor it on a ramp and bail out as the vehicle collides into a guard tower. That can all be done without a hint of scripting or splines. Rico's tendency to bounce away from would-be fatal collisions is helpful for me, but I expect dedicated players to do crazy things like stack up cars for island-sized dominos.

The leaderboard that accompanies any measurable action is a novel distraction. There is also a ghost feature for the challenges that I wasn't able to use during the review. The idea is to see and best a friend's ghost at a given challenge, which seems promising, but it is puzzling that there isn't any other multiplayer component to the game. 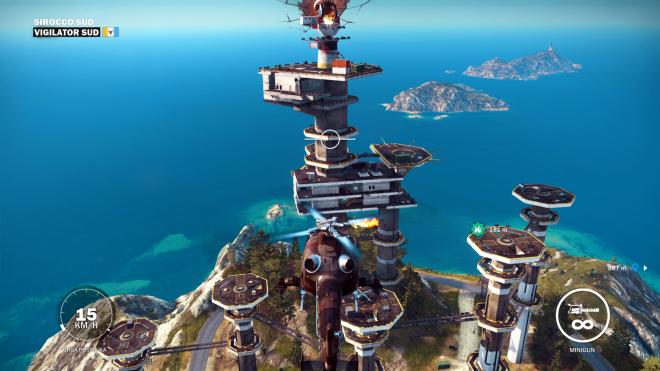 'Just Cause 3' does a few things that are just ok, but it also does explosions and crazy physics on a big scale very well. By easing up on some of the restrictions typical to openworld games and dialing up Rico's special abilities, 'Just Cause 3' survives its early rough opening to become a worthy diversion for many and an endless playground for others.