Defiant Development is a newer Australian company with some interesting titles under their belt, including 'Warco', a game intended to train journalists who are considering working in active warzones. In late 2013 they successfully funded a Kickstarter campaign for 'Hand of Fate' with a promise of Steam Early Access and a release in early 2014. The release was pushed back a year but we now have the genre-straddling 'Hand of Fate' on the PC, Xbox One, and PS4.

'Hand of Fate' is as unique as it is whimsical. It is a grab bag of tarot cards, collectible card game (CCG), board game, choose-your-own-adventure books, try your luck gambling (not with real money), and real-time action. Before each playthrough, the player puts together a deck of cards. CCG fans will recognize the different card types - weapons, armor, magical effects. Many of the cards are encounters with monsters, or with NPCs who may help or hurt the player. (The game also has a pretty smart Recommended Deck function.) Once the deck is ready, the dealer shuffles, then lays out several of the encounter cards face-down in a grid on the table. The player is represented by a little piece that may move one card at a time across the grid, uncovering each card as they proceed and dealing with its encounter. Once the grid is complete, a new grid is dealt, and this happens until the dealer’s boss card is discovered. 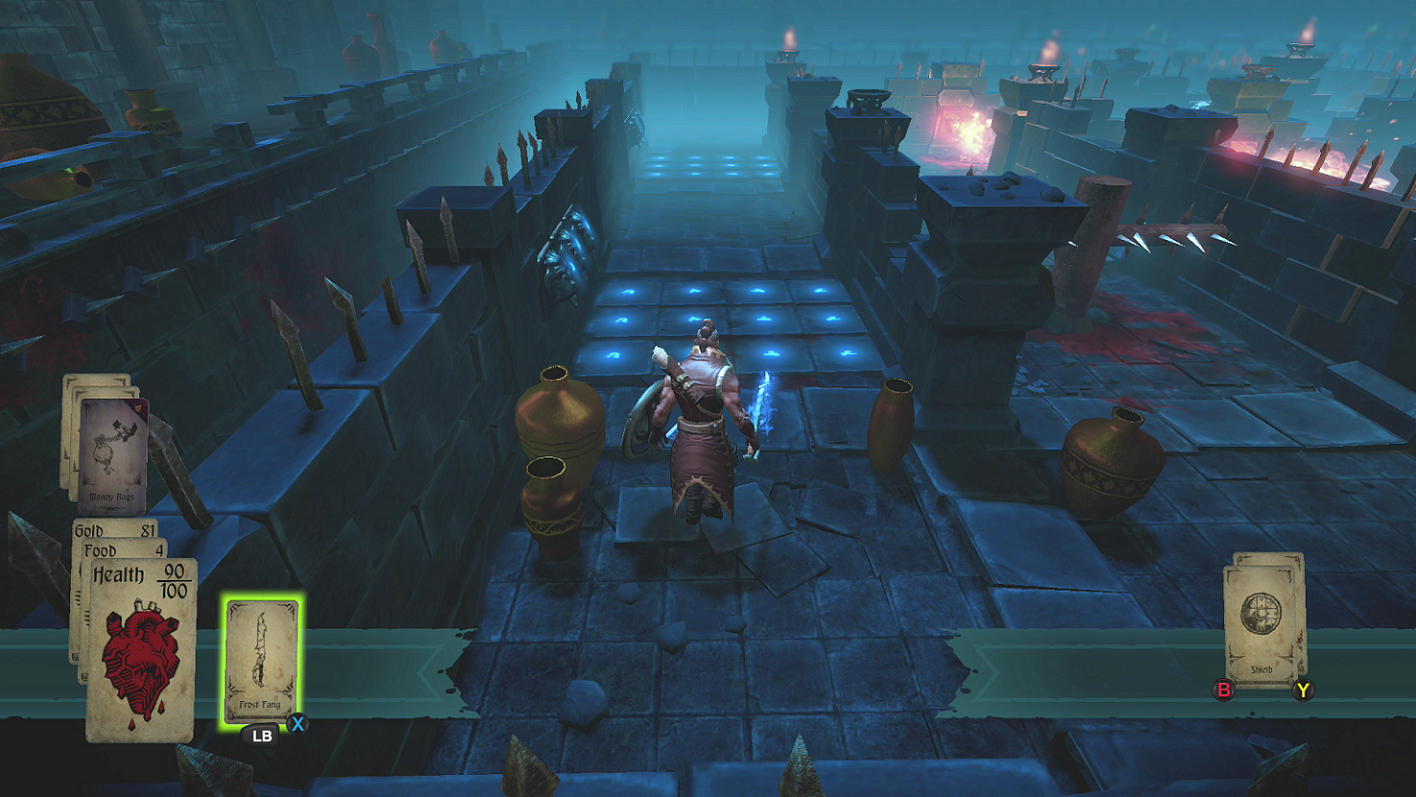 The encounters vary wildly. Early cards offer small risks for small rewards; a gulch appears with a shiny weapon at the bottom, for instance. The player has a 100% chance of collecting the weapon, and a 25% chance of being injured in the process. To resolve the probabilities, I have to select a card from four cards that are initially displayed face up, then turned down and shuffled, shell game style. I like to think that I’m quite good at selecting the "success" cards, but I probably select the "failure" or "super terrible game-losing failure" cards just as often.

This makes 'Hand of Fate' a game of chance, albeit one that can be heavily influenced by proper deck selection, smart grid movement, and mastery of the rudimentary combat. Some encounters require a fight between the player and monsters, and the game shifts from the table to an actual freeform environment. Combat is a stripped-down version of modern fighters like the 'Arkham' series or 'Sleeping Dogs' - press X to attack, Y to counter when an enemy has an icon over their head, etc. Card bonuses come into play during these fights. When I had a magical, cold-infused sword card in my weapon slot, I got a magical, cold-infused sword in my hand during the fights. Stacking the deck with primo weapons and armor, obtained in greater frequency as the game moves forward, makes these fights much easier.

Every playthrough has a modifier based on the final boss. Early modifiers are easy to cope with, but the later ones can become quite nasty, and there are dealer added cards to my deck to cause me further distress. Whenever the dealer hammered me with a bevy of painful cards, my frustration dissipated a bit when I remembered that my last playthrough had bequeathed me with strong equipment cards early on, and I had trounced him. The extreme influence of luck on each game makes it exciting, maddening, and addictive all at once.

The dealer, whose name I never discovered, is really the only character in 'Hand of Fate'. The player’s character is silent and nameless, and all of the summoned opponents are nondescript. The dealer is some kind of mystical, masked shaman with Romani and Arabic influences. He has a sadistic and dry sense of humor, and alternately offers great rewards and delivers scathing abuse. He is a great character who invoked a kind of Stockholm syndrome in me over time, as I felt compelled to keep playing, but always forgave him when he dealt me a terrible hand. 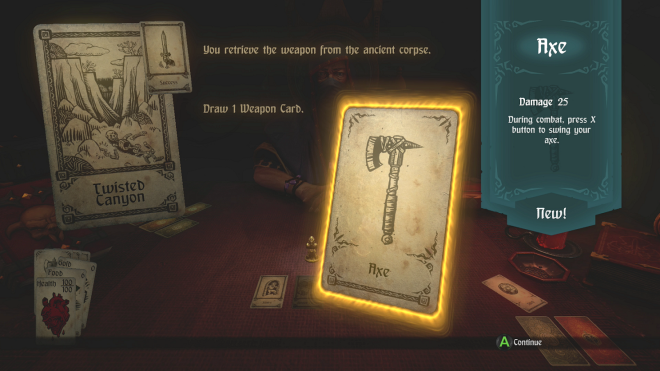 'Hand of Fate' suffers a bit in the video and technical departments. It’s not bad-looking, but the textures and special effects are underwhelming, especially for a game with a price on the higher end of the indie spectrum. More importantly, the framerate can get pretty bad during combat. It’s not game-breaking, but can get irritating when the stutters interfere with the character’s movement. 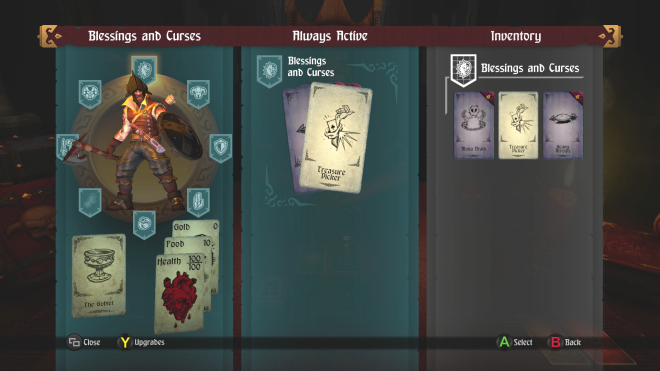 The game has a great soundtrack, with an hazy and exotic flavor that helps carry it through the slower moments. The dealer has a good voice actor, although the accent becomes a bit fuzzy at times, as though he’s trying to sound like he’s from somewhere he’s not. He is the only voiced character.

As previously mentioned, 'Hand of Fate' has that "just one more turn" quality. There are 12 arranged playthroughs, which comprise the Story Mode. These can become quite difficult after the first 3, depending on the player’s luck. They often require multiple attempts to clear. After finishing the first 3 or so, Endless Mode opens up, and works just like it sounds, adding much in the way of replayability. 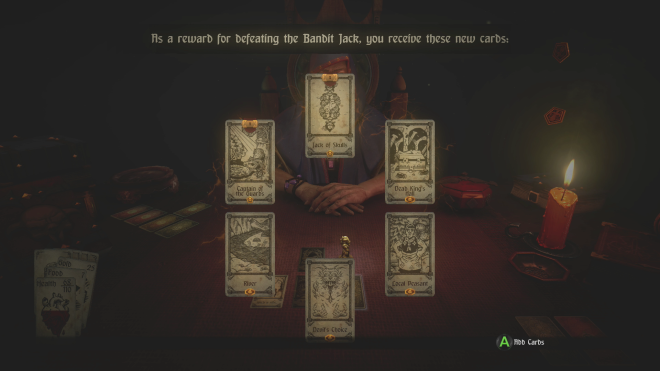 'Hand of Fate' is the kind of deviously addictive game that doesn’t come along very often. It is innovative, easy to learn, and rewarding. It is also complex and punishing, but keep in mind that you’ll never lose any of your cards permanently - if the dealer defeats you, you only lose progress against the current boss, and can restart anytime. The deck-building is fiendish fun, and all those hours spent fighting in the 'Arkham' games pays real dividends here. The real-time combat lets the player make their own luck in many situations. At launch, 'Hand of Fate' has some noticeable problems on the technical side, but is still a great play, especially for card fans disappointed by this year's Magic.