The Game Itself
3.5 Stars
The Video: Sizing Up the Picture
2 Stars
The Audio: Rating the Sound
3 Stars
Replay Factor
4 Stars
Bottom Line
Recommended

'Tower of Guns' was created by one guy - Joe Mirabello of Terrible Posture Games. Mirabello was laid off during the 38 Studios debacle of 2012 when the state of Rhode Island tried to fund a video game company that had been created by a professional baseball player, and the studio then went bankrupt. I’m not making this up. Mirabello decided to go on his own, and released 'Tower of Guns' for PC back in 2014. Now it has been ported over to the Xbox One.

'Tower of Guns' is a first-person shooter tower offense bullet hell roguelike. There are only a few levels, but each one is procedurally generated so the effective number of maps is far higher. Before each level, I was allowed to pick one gun and one ability. The guns include such things as a sawblade launcher, rapid-fire plasma shooter, and a painfully slow but very destructive grenade launcher. Once the fun begins, a dizzying array of turrets materialize out of thin air and shoot clouds of projectiles towards the player. As its name would suggest, most of the maps are vertical in nature, and so I made my way up each floor towards the top. 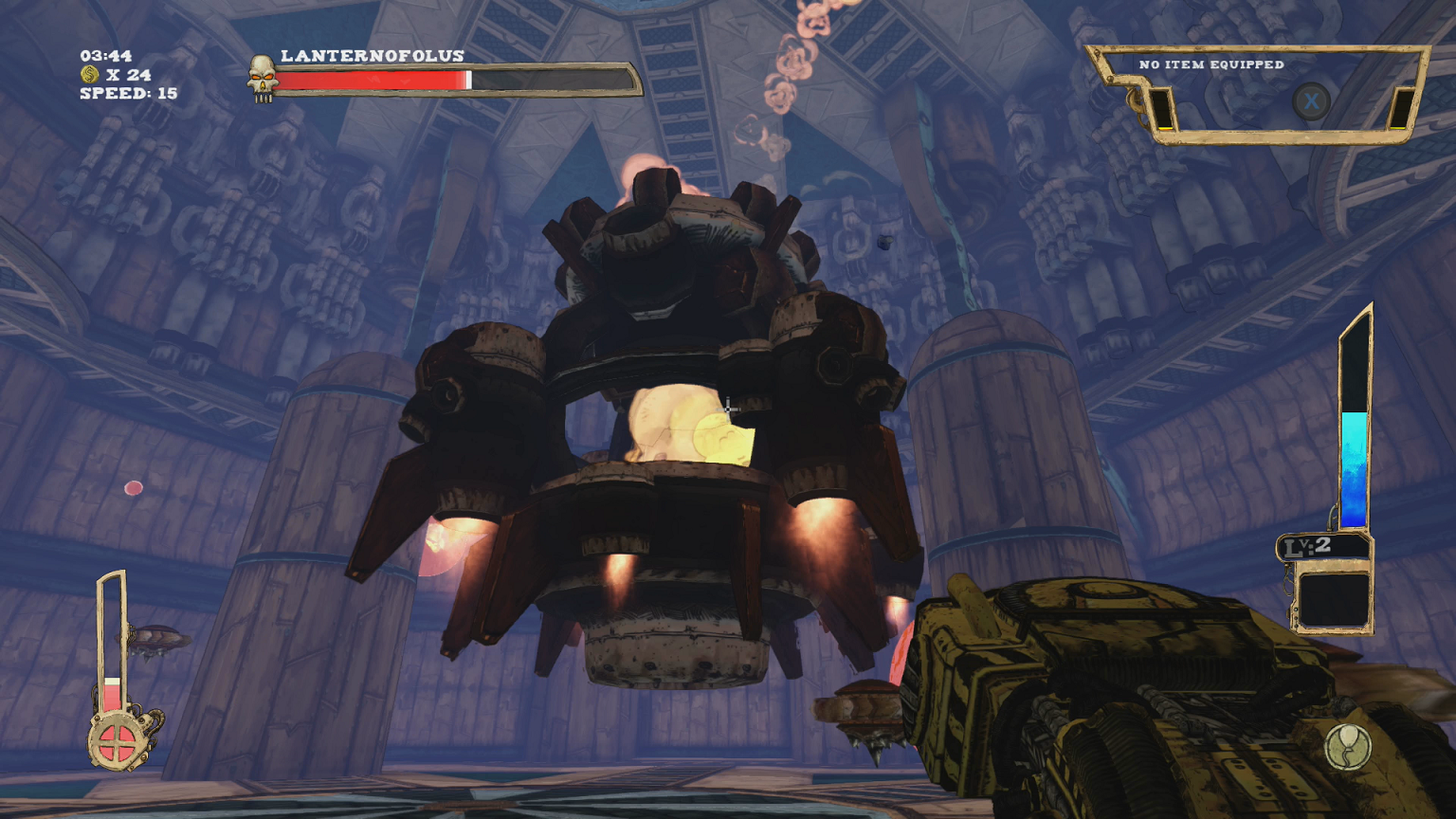 Besides the turrets, some of which are stationary and some that are not, each room has power-ups, coins, little storefronts where said coins can purchase more power-ups, and weapon experience points. The guns themselves can level and become more powerful, but taking hits reduces the experience in turn. Some platforming is included, like floating sticky blocks that slow movement and warp blocks that speed it up. After going through a few doors, a random boss descends from the ceiling and then the screen becomes saturated with sawblades, exploding bullets, lasers, and other terrible things. The bosses are quite clever, such as the amoebabot that disintegrates into smaller versions of itself when shot.

The game was frustrating at first, but after I let a few deaths wash over me, I got into the masochistic roguelike groove. The rhythm of strafe, shoot, collect huge piles of loot, and look for secrets grew on me after a few playthroughs. The clock is always ticking, threatening to meddle with my level score, but I often let it run up so I could search for secrets in the form of bonus rooms and hidden caches of loot (and the elusive "uber-secrets", which are even better). I enjoyed the game more when I moved through the levels at an organic pace instead of obsessing with defeating every single enemy.

There isn’t much story to speak of except for random bits of dialogue that pop up at the beginning of each level. These are non-sequiturs that are pretty funny, like threats traded between imaginary mafia bosses and pithy recycling reminders. Every fifth death rewarded me with a cakeroom where I was given words of encouragement and some loot. No reason is given for why the player needs to get to the top of the tower, or who the protagonist is, and no reasons are needed. 'Tower of Guns' is all about the gameplay, pure and simple. 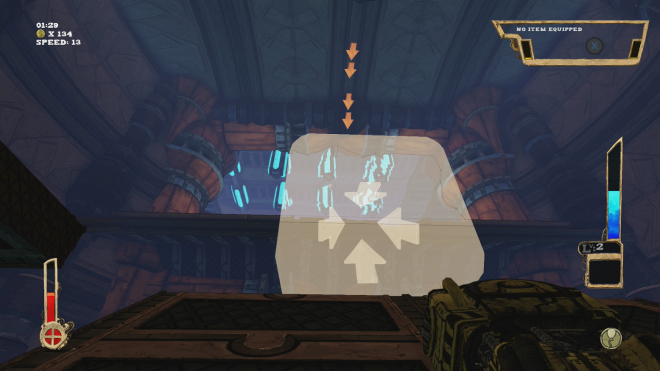 Perhaps it’s mean-spirited to pick on budget indie games for not looking good, but 'Tower of Guns' does not look good. It has a wet, cel-shaded look with an industrial/steampunk theme, with lots of gears and pistons all over the levels. It looks like a cheaper version of 'Borderlands', itself not renowned for its great visual quality. Backgrounds and textures are muddy, effects are simple, and, most frustratingly, the hitboxes on the turrets often do not match the models. That said, the game runs smoothly. 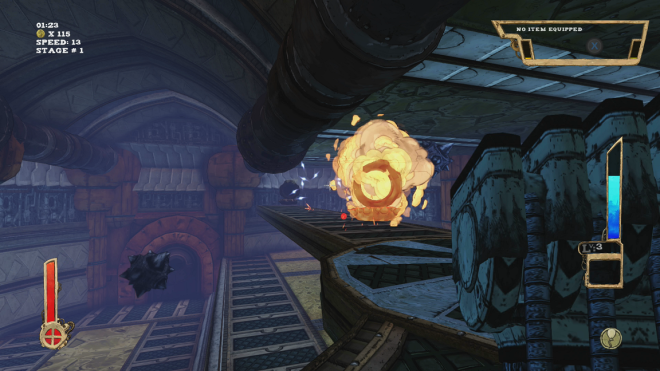 The sound effects are weak and repetitive, but the music is much better. It has a riffy 80s glam rock feel, with the occasional electronic segment. A spooky melody plays in the background, just in case you forget that you could die at any moment.

Unlocking new guns and abilities isn’t too difficult, so between the randomized levels, bosses, enemies, and weapons, the game could keep me entertained for a few hours at a time. Its creator describes it as a "lunch break game", and that is an accurate statement. It is best enjoyed in relatively small doses, like a level or two per session. Marathons burned me out, as the content can wear thin. Besides the standard mode, there is an endless mode (works just like it sounds, keep going until you die) and a dice roll mode. In dice mode, a random modifier is applied to the player at the beginning of each room, like an automatic quintuple jump. A leaderboard provides vindication for those in love with high scores. 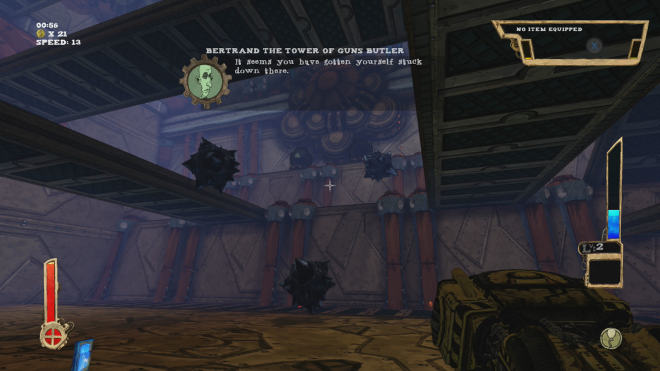 'Tower of Guns' is a decent game, but its price at launch is just a bit too ritzy for the amount of content it offers. There is fun to be had in its procedural levels, for those who enjoy the challenges of roguelikes and who like to be tested over and over.