The Game Itself
4 Stars
The Video: Sizing Up the Picture
4.5 Stars
The Audio: Rating the Sound
4.5 Stars
Replay Factor
2.5 Stars
Bottom Line
Give it a Rent

It is the year of 'Star Wars', and along with the movie that is sure to break many records, gamers have a new 'Battlefront'. The original series, developed by Pandemic (since shut down), was well received, with the last release in 2005. A PSP spin-off series by Rebellion Developments concluded in 2009. This multiplayer-centric reboot was developed by EA’s DICE studio ('Battlefield', 'Mirror’s Edge'), with help from Criterion and Visceral.

'Star Wars Battlefront' is a multiplayer shooter with a variable perspective. Players can switch back and forth between first- and third-person as their hearts desire. In true 'Star Wars' fashion, the battlefields are awash in blaster fire, thermal detonators, X-wings, walkers, and even lightsabers. At the beginning of the match, players are assigned to the Rebel or Imperial side and proceed to mercilessly gun each other down while protecting some objective (except in the case of the Supremacy gametype, which is standard deathmatch). 'Battlefront' is more light-hearted in style than many modern shooters that try to focus on edginess and technical acumen. Pick-ups litter the maps and award a player with gadgets or other goodies, and each side can periodically field a hero character, such as Han Solo or Boba Fett. 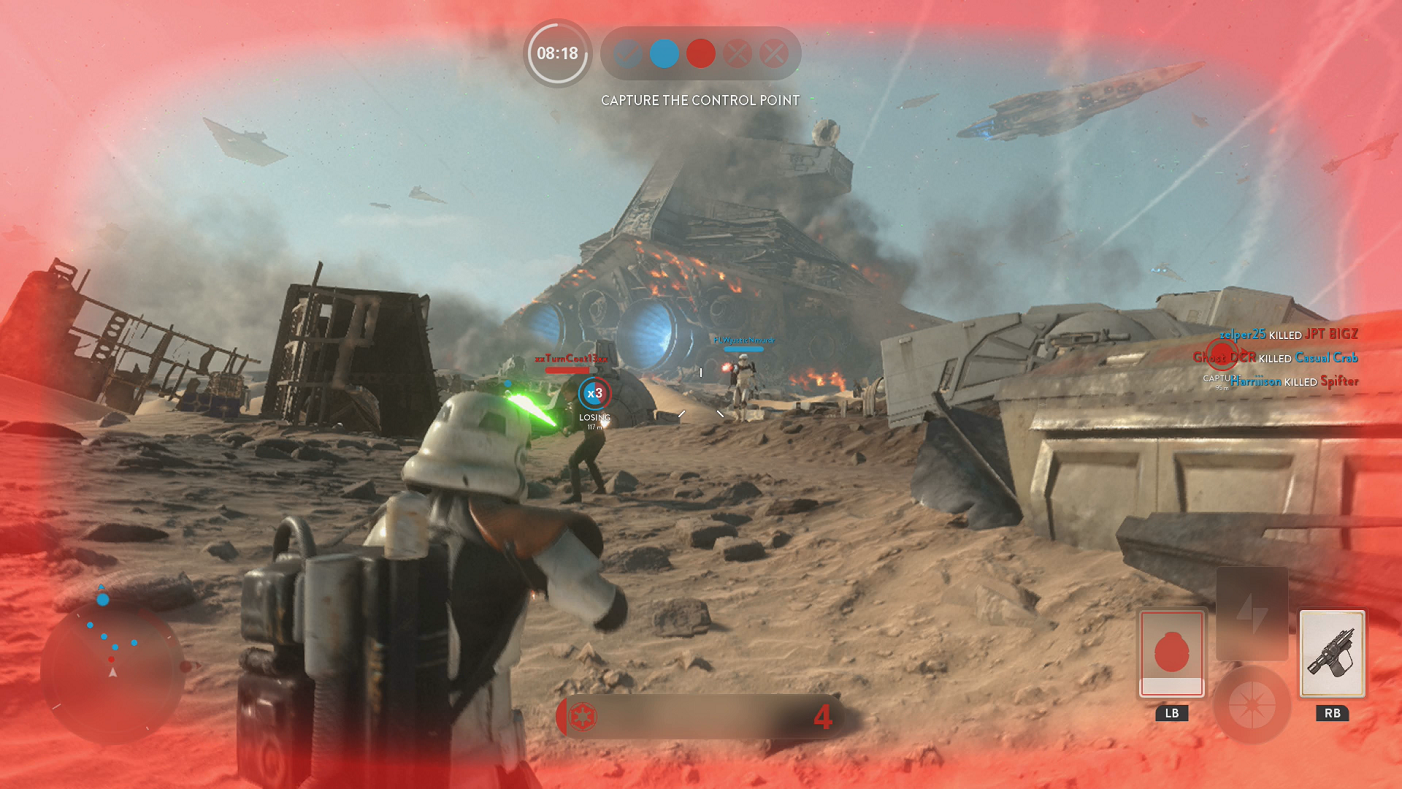 I really enjoyed the sweeping, epic space opera feel that the 'Star Wars' license brings to the table. In multiplayer (which is really the only way to play this game - more on that later), games can field up to 40 players, which is absolute bedlam. There is so much happening on screen that it can be overwhelming, but the radar is a huge boon. Some maps tend to squeeze both sides into a central bottleneck, especially during king of the hill matches, and that was when the fun factor was highest and the lives were shortest. Health regenerates quickly and respawns are instantaneous, so death wasn’t that painful unless I was carrying a nice power-up, which I was keen to use as quickly as I could.

The controls and gunplay are not as technical as other shooters, but they don’t need to be. Combat is fluid and intuitive, and even though all of the basic blaster rifle variants are pretty similar, I was rarely frustrated by sticky reticles or latency issues. The vehicle and spacefighter segments are equally light and responsive, particularly X-wing dogfighting. The Walker Assault gametypes is one of the strongest, although it often feels as though the brick tanked AT-ATs overpower the meager Rebel forces. Other gametypes are the usual multiplayer shooter suspects. I liked Supremacy just for the sheer spectacle of it - even though the maps are huge, action is easy to find. With so many players available, there are several small battles scattered across the level at any given time.

Characters are pretty customizable (although I’d like to see more stormtrooper variants), with the nicer skins and equipment available only after playing for awhile and earning lots of credits. Each character starts with only a blaster rifle to their name - other equipment comes in the form of cards, also purchased via credits. Cards recharge throughout the battle, and account for grenades, sidearms, heavy weapons, and so on. 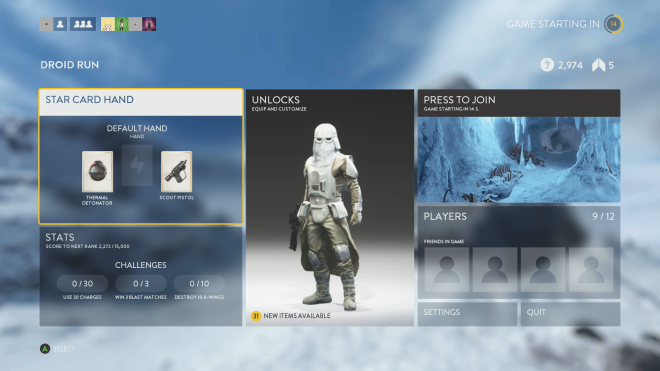 'Star Wars Battlefront' is one of the best looking Frostbite games to date, even with performance and visual quality that has been scaled back on the Xbox One as compared to the PS4 and PC. The terrain is rich and beautiful, effects are dense, and animation is realistic. Framerate stays at or near 60 most of the time, but the big battles slow down a tad. Another issue I noticed was a late draw-in when the camera was moving at high speeds, such as during the dogfights. First- and third-person views are both well implemented, but I much prefer third-person for the slightly better situational awareness.

Endor, Hoth, and even the new Jakku are identifiable and memorable. If there was a stream of free maps, they would be very welcome.

On the connectivity end there is little to complain about. I had no dropped matches, host migrations, long lag stutters or anything of the sort, even with 40 players involved. Matchmaking is quick and accurate, as the players involved were mostly equal in skill level. 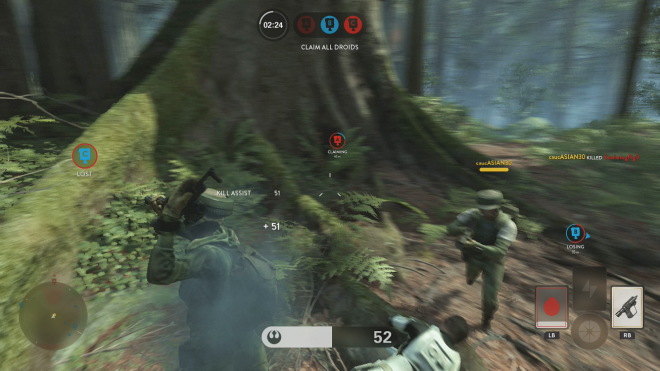 The sound design is also of a high quality. The blasters, thermal detonators, lightsabers, and spaceships sport the perfectly imitated film sound effects that fans have come to know over the years. John Williams’ score is as wonderfully recognizable and iconic as ever. It is a tough act to follow for the voice acting, which is decent but not revolutionary - not surprising, given the lack of any real storyline.

The tutorial missions are of course single player, and there are a handful of co-op missions that can be done offline and even in split-screen. There is no campaign to be had. The single player content is all anemic and I had little desire to keep playing it. The multiplayer is far better, although it also has problems with its staying power. People who are playing this only for the license might not get as much out of it as dedicated shooter fanatics, as there is a heavy dose of rinse-and-repeat style gameplay. Walker assault is novel, however, and may prove to be the most popular gametype if I had to guess. 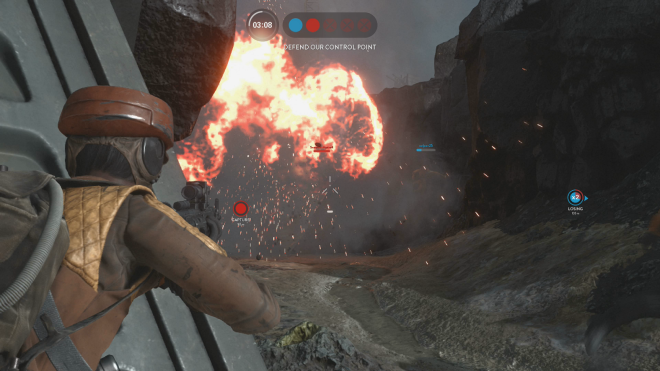 The reboot of 'Star Wars Battlefront' rises above the mediocre level of many licensed games to be something quite enjoyable. But as I play, and the energy level slowly wanes, I can’t help the feeling that it could have been more. Like 'Evolve' and 'Titanfall' before it, 'Battlefront' has a great premise and strong initial gameplay, but a short honeymoon period.