The Game Itself
4 Stars
The Video: Sizing Up the Picture
4 Stars
The Audio: Rating the Sound
4.5 Stars
Replay Factor
2 Stars
Bottom Line
Recommended

Steam version reviewed. The review was conducted with an Xbox controller.

Back in August 2014, Tic Toc Games, a new studio formed by a small group of ex-WayForward developers, funded a Kickstarter for a PC and Wii U platformer: 'Adventures of Pip'. It was the project’s second Kickstarter - the first one was unsuccessful, so they tried again with a more modest target. The game spent some time in Steam’s Early Access program and is now available for wide release.

'Adventures of Pip' resembles the platformers and action games of yore, like an 8- or 16-bit Mario or Zelda. Pip starts the game as a featureless red pixel, in a kingdom where an evil queen has determined that everyone is going to live as just a pixel. Naturally this will not do, and so Pip sets out to defeat the queen, save the princess she has captured, and restore everyone to their normal spritely selves.

Pip has three forms available. The first is his default pixel self, who can land the longest jumps of the three. Second is an 8-bit form, who is the fastest of the three, can wall jump and hang endlessly, and punch things. The third form, the 16-bit form is the heaviest. He can’t move around very well, but he does have a cool sword. The player can downgrade the forms at will, and can upgrade by defeating ubiquitous, fragile, crystal monsters.

Changing forms is the key to navigating 'Adventures of Pip’s' ledges and puzzles. When downgrading, nearby blocks are destroyed, freeing up new areas. However, it also means that Pip no longer has access to the abilities in the form he just downgraded from. There are entire rooms consisting of a single jump, where Pip has to change forms multiple times (often in mid-air), clear obstacles, and avoid bad guys and bottomless pits, with little room for error. The difficulty swings back and forth wildly, but even during the most egregious spikes, I still had a good time trying to figure out the puzzles and nail the sweet jumps. 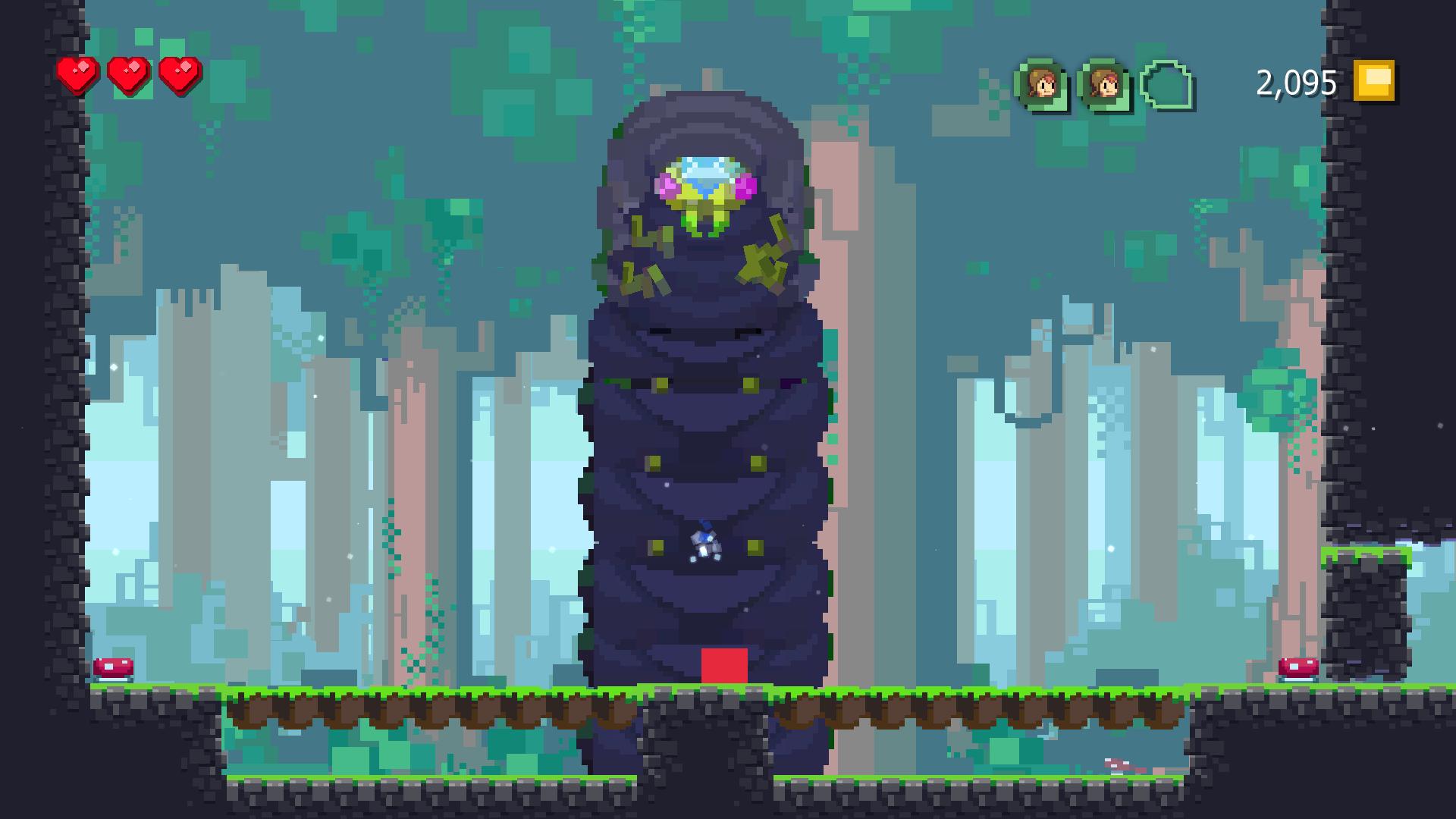 Scattered around the levels are a variety of monsters. Some are harmless, content to walk back and forth in a tiny area, like a goomba. Others are more aggressive or shoot harmful projectiles all over the screen, or are spiky and cannot be jumped on. Smartly, many of them fit into the level design, and as such they tend to respawn a few seconds after they die, just like the collapsible ledges. If I whiffed a jump and somehow didn’t die, I just had to jump back to the start and wait for the monster/hostile jump box to respawn. Defeated monsters drop pixel gems, which can be used in town to buy upgrades and items. 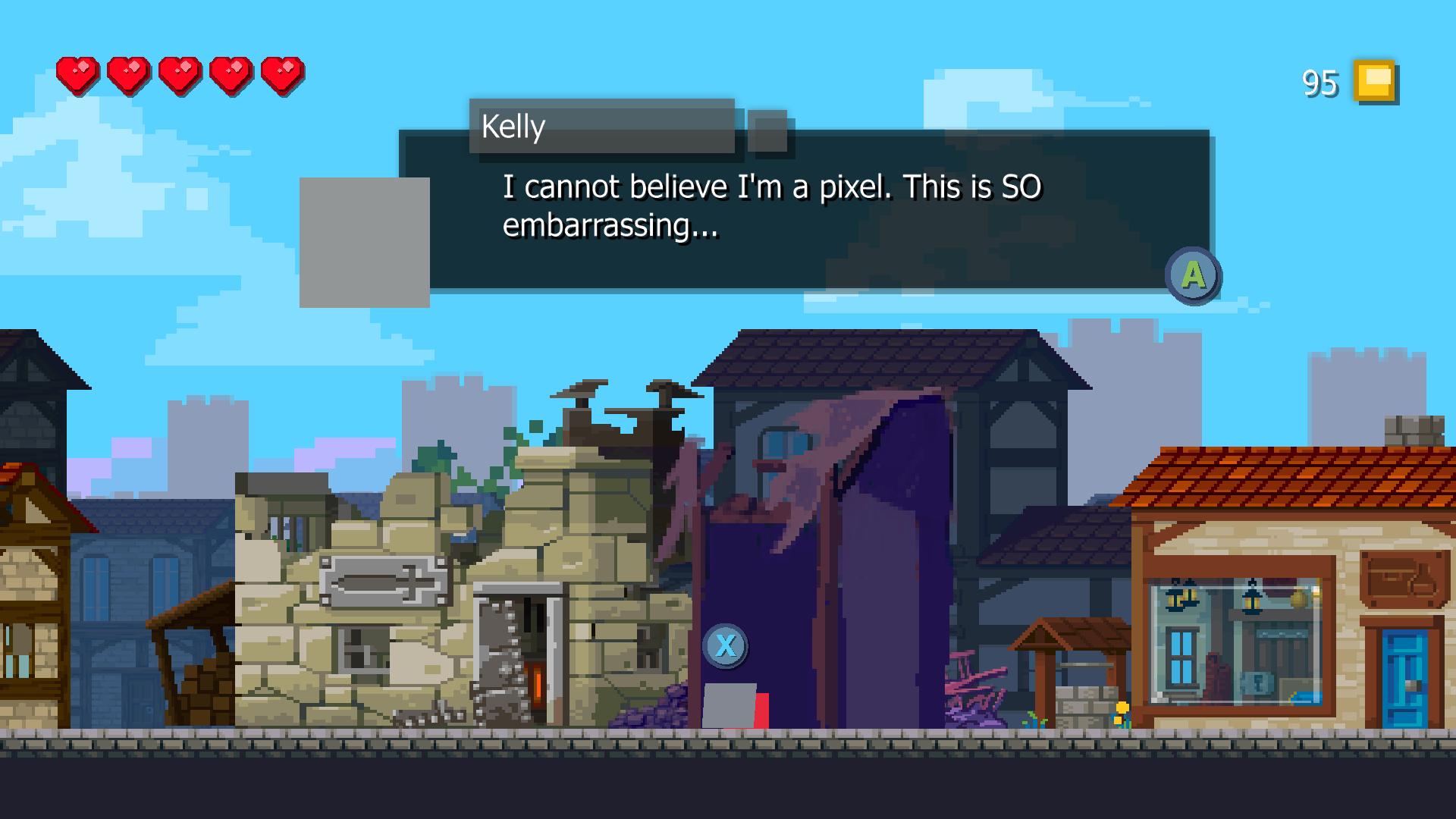 'Pip's story doesn’t take itself too seriously. All of the characters are aware that they are sprites and their biggest fear is being converted into a pixel, except for perhaps Pip himself, who is quite happy to hop around in pixel form and save the day. There are a few short cutscenes during the levels, especially where bosses are concerned, where the characters quip with each other about many things, most of which are completely unrelated to Pip’s quest. The script is smart, simple, and conversational. It offers just enough to provide some smiles without getting in the way of the gameplay, and doesn’t have any delusions of grandeur. 'Adventures of Pip' is about good old-fashioned, nostalgic platforming, with some modern adaptation. 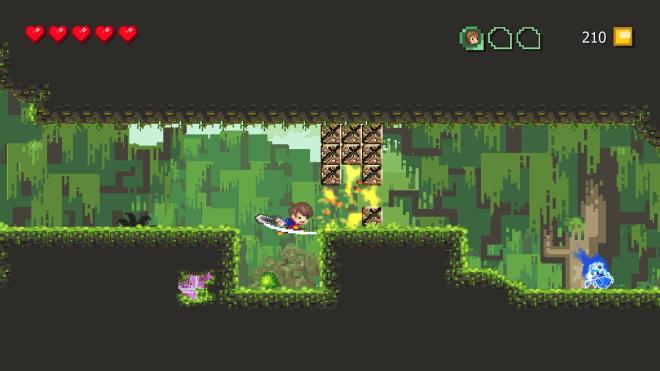 Whenever an indie game comes down the pipe that embraces an old school visual aesthetic, I am tasked with explaining how said older tech can still look nice. We have become quite spoiled with our 4K resolutions and HDTVs and all of those other toys, but pixel art is still making strides in the background. 'Adventures of Pip' uses a mixture of pixels, sprites, and a kind of pixel-sprite combo. Some of the lighting and animation effects look very beautiful. Most admirably, the controls are perfect. Pip always goes exactly where I move him without any slipperiness or wonkiness, even if that’s straight to his death. 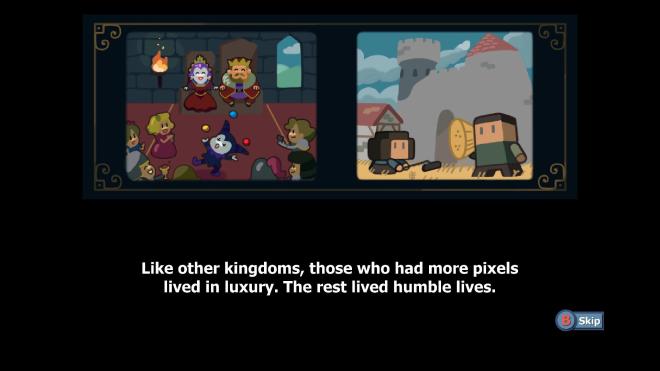 'Pip' has a great soundtrack, courtesy of prolific composer Jake Kaufman ('BloodRayne', 'Red Faction', 'Shovel Knight'). It is light, refreshing, and doesn’t get old. The sound effects follow the same nostalgic theme as the visuals - expect lots of plinks and beeps and other retro noises.

The levels are short, but there are quite a few of them. They are scored solely on how many villagers are collected (there are three in each one). Sadly, the Kickstarter didn’t collect enough pledges to garner a new game plus, challenge mode, or co-op, so you’ll have to make do with the single-player campaign. 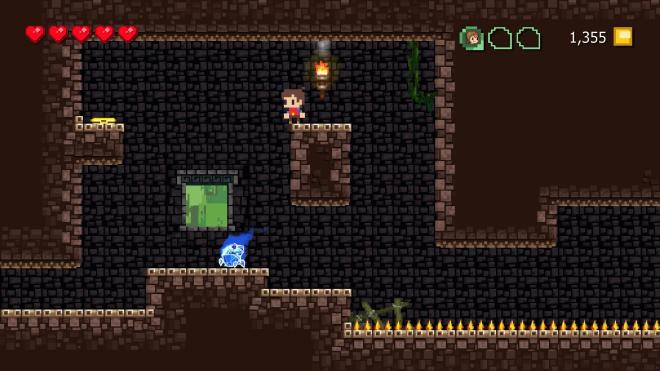 The indie platforming scene is thriving, and the 'Adventures of Pip' is another example of why that’s happening. It tells a light and fluffy story but does it with panache, love, and great controls and mechanics. It’s perfect for platform fans who want to take a trip down memory lane, or anyone who enjoys jumping on the heads of bad guys.