The Game Itself
3.5 Stars
The Video: Sizing Up the Picture
3.5 Stars
The Audio: Rating the Sound
4 Stars
Replay Factor
4 Stars
Bottom Line
Worth a Look

Badland: Game of the Year Edition

'Badland' was released on iOS about two years ago, where it received critical acclaim and many awards. The Game of the Year edition on consoles includes all of its DLC, a visual touch-up, and co-op and multiplayer modes.

'Badland' is a side-scrolling puzzle platformer, but it’s rather different than something like 'Limbo' or 'Braid'. The main character is a collection of strange little critters, called Clonys, that live in a highly mechanized and dangerous forest. In each level Clony needs to get from the left to the right while avoiding horrible death at the hands of chains, pistons, saws, and other mean machine things. Time is also an enemy - once the level starts, the screen continues moving to the right, on its own accord. If Clony gets stuck or takes too long, he is swallowed up and the game ends. This lends a certain urgency to gameplay, as each level is essentially timed.

Clony can fly if the A button is held, and can awkwardly hover if the button is tapped instead. This mechanic, used in moderation, is key to quickly moving Clony and his bros through the tiny passages in the forest quickly enough to avoid being screened. It also has to be done slowly enough to avoid the torture devices that liberally coat each level. The translation from mobile touchscreen to console controller isn’t perfect, and control can be clumsy and frustrating. It can also be very satisfying.

When I learned a level (after a few consecutive deaths, of course) and would then fly at top speed through it, narrowly avoiding destruction, the elusive satisfaction would take hold.

Clony can pick up power-ups along the way that speed up or slow down time, alter his size, make him sticky or jumpy, and multiply 'Gremlins' style. The clones are very expendable cannon fodder that block for the main Clony and nobly sacrifice themselves to saw blades and the like. The vast majority of them die almost immediately after spawning, because the levels were crafted so tightly that getting through some of the puzzles requires the death of 20 poor Clonys just to let one through. The level design is superb, but definitely restricts the player in a challenging way. I did enjoy trying to figure out the puzzles, which often involve bumping a Clony against a pile of rocks or needles and blowing up mines to clear a path. 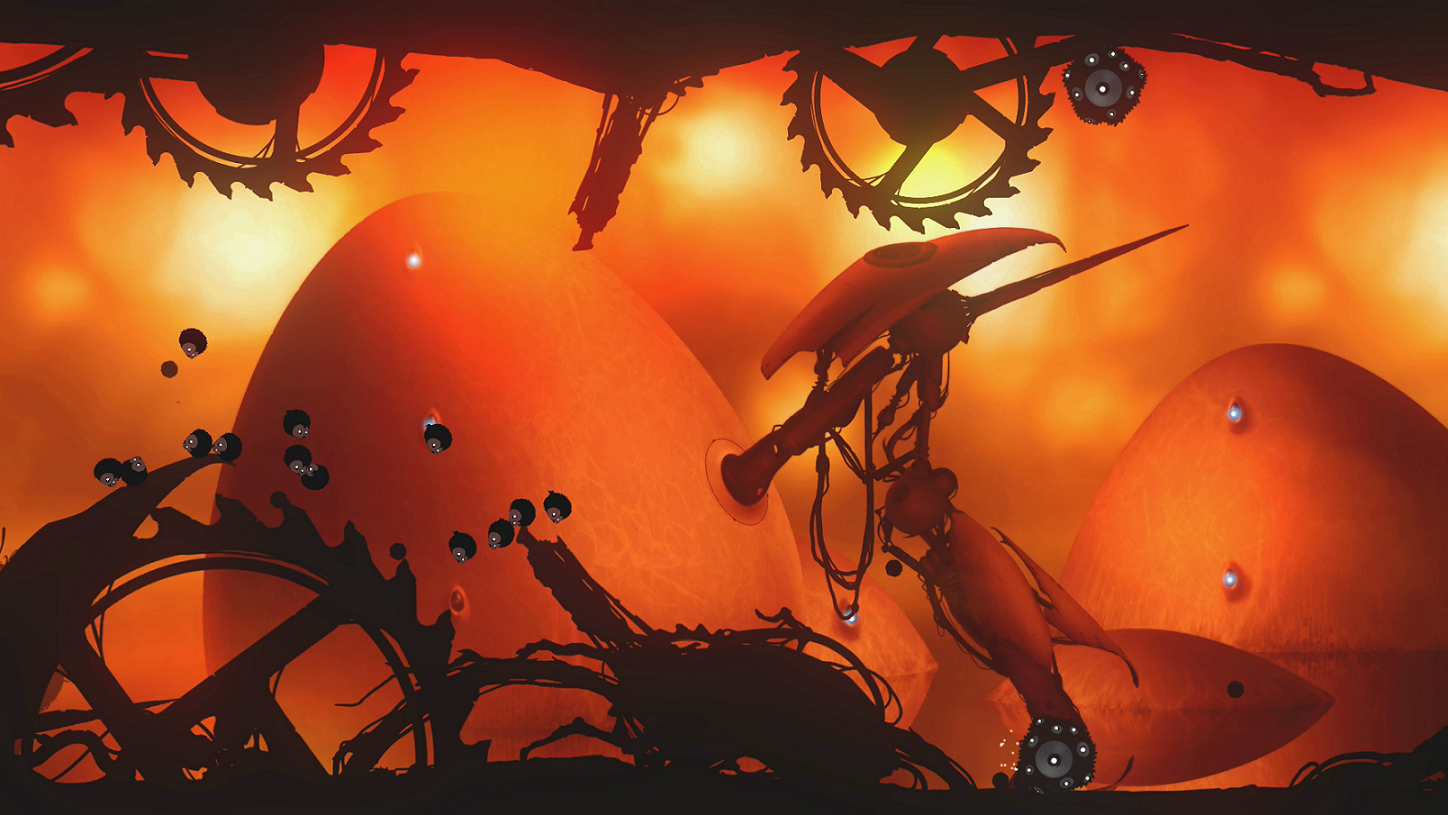 For every success I have in threading my way through the obstacle courses, there are a dozen failures. Often this would mean spending several minutes in the same area, watching with a mute, mildly complicit shock as my Clony would inexplicably destroy itself in the exact same manner, over and over again. I can’t help but wonder if this is what the designers intended, or if touchscreen players of the older version had more luck. Still, this is a common feature of indie platformers, perhaps rebelling against the low "difficulty" of mainstream games, and not entirely unwelcome. It makes the successes much sweeter. 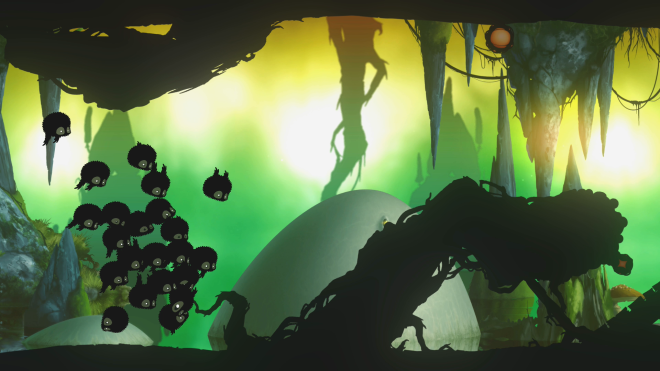 'Badland' has been ported to the Xbox One with marked HD improvement in its simplistic, beautiful forest palette. The subdued, artistic backgrounds remind me a lot of 'Ori and the Blind Forest', along with the cutesy models of 'Angry Birds' or 'Patapon'. Despite its minimalist presentation, the machines and thorn bushes which serve as the enemies still manage to look suitably sinister. They are all in black, and contrast sharply against the more colorful background environments. What little story 'Badland' has is doled out through those backgrounds. As the machines slowly invade the forest, fewer animals can be seen. 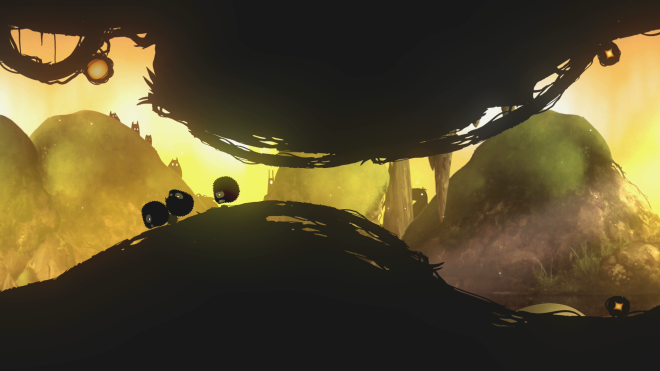 What 'Badland' lacks in music it makes up for with its charming, eerie forest sounds. Between the desolate plinks of rainwater, distant wildlife, and grinding machinery, it’s like a nightmarish version of Sounds of the Rainforest.

There are over 100 levels in single-player, with each one taking between one and four minutes, depending on how good/lucky you are. The vast majority of them are a blast, with some cruel difficulty spikes popping up here and there. The GOTY edition also includes co-op and multiplayer, both of which are local only (the developers have mentioned that with twitch-based games such as this, even small doses of lag are enough to kill gameplay). Despite this restriction, the multiplayer content is worthwhile, particularly the co-op. 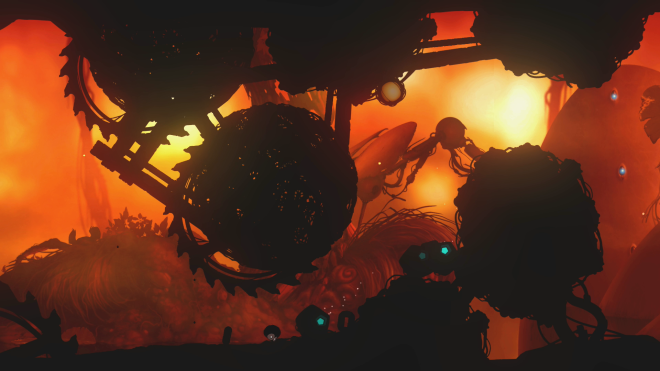 The conversion from the smartphone to the Xbox is not perfect, but 'Badland: GOTY Edition' brings a decent, inexpensive, and fun platformer to the table. It is addictive in spite of its eccentric and sometimes maddening tics. While the single-player is the best part, the co-op is no slouch.