Double Fine Productions is where 'Monkey Island' and 'Grim Fandango' developer Tim Schafer has hung his hat since he parted ways with LucasArts in the early 2000s. Double Fine has successfully funded a few Kickstarters, including this one - a tactical, turn-based strategy game called 'Massive Chalice' that raised well over a million dollars in the spring of 2013.

'Massive Chalice' takes inspiration from such titles as 'Final Fantasy Tactics' and the much more recent 'XCOM: Enemy Unknown'. There are two modes of gameplay. One is an overmap where resources are managed, facilities are constructed, and research projects are developed. Time passes in this mode quite quickly, with months and years falling off the calendar as I held down the right trigger. During this process, fights occur intermittently, and the perspective changes to a grid where individual units duke it out against the enemy with arrows, grenades, and huge logs. 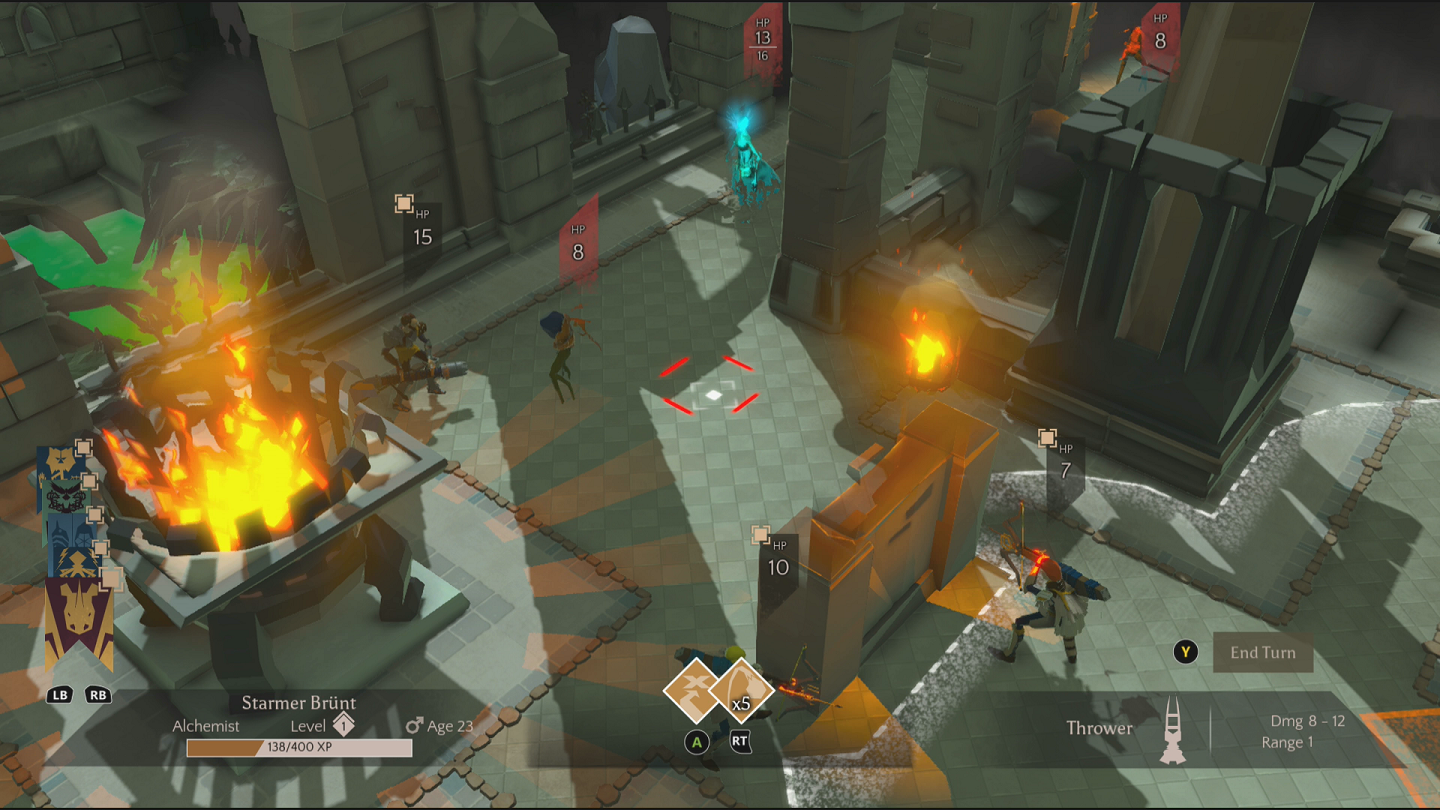 The game threw me right into the thick of things with barely an explanation as to why the situation was so dire. Apparently a dark and oppressive force called the Cadence is threatening life in this idyllic fantasy kingdom. As luck would have it, a magical, massive chalice has been constructed with no less than two personalities imbued within. The chalice, when not bickering with itself, advised me on how best to run my country (the audacity). It also has the power to cleanse the realm of the destructive Cadence, but only after a few hundred years have passed. It was up to me to keep the wheels from falling off until then.

The time-warping overmap is a relatively cut and dry affair. There are a dozen or so provinces that can hold a building each. The most common building is the keep, which can house royal families and turn them into hero baby factories. This is very important, as heroes die off very quickly between combat, special events, and that pesky old age. I was lucky to hold onto a hero until their 70th birthday if they weren’t a combat unit, and often far less than that if they were. It wasn’t uncommon for me to lose one or two of my five-person squad each fight - 'Massive Chalice' is a tough game, as many of the best strategy titles are. The dynasty system, where I can arrange marriages, adopt kids, and influence the traits of my heroes over the long term, takes some getting used to but allows for some nice personalization. 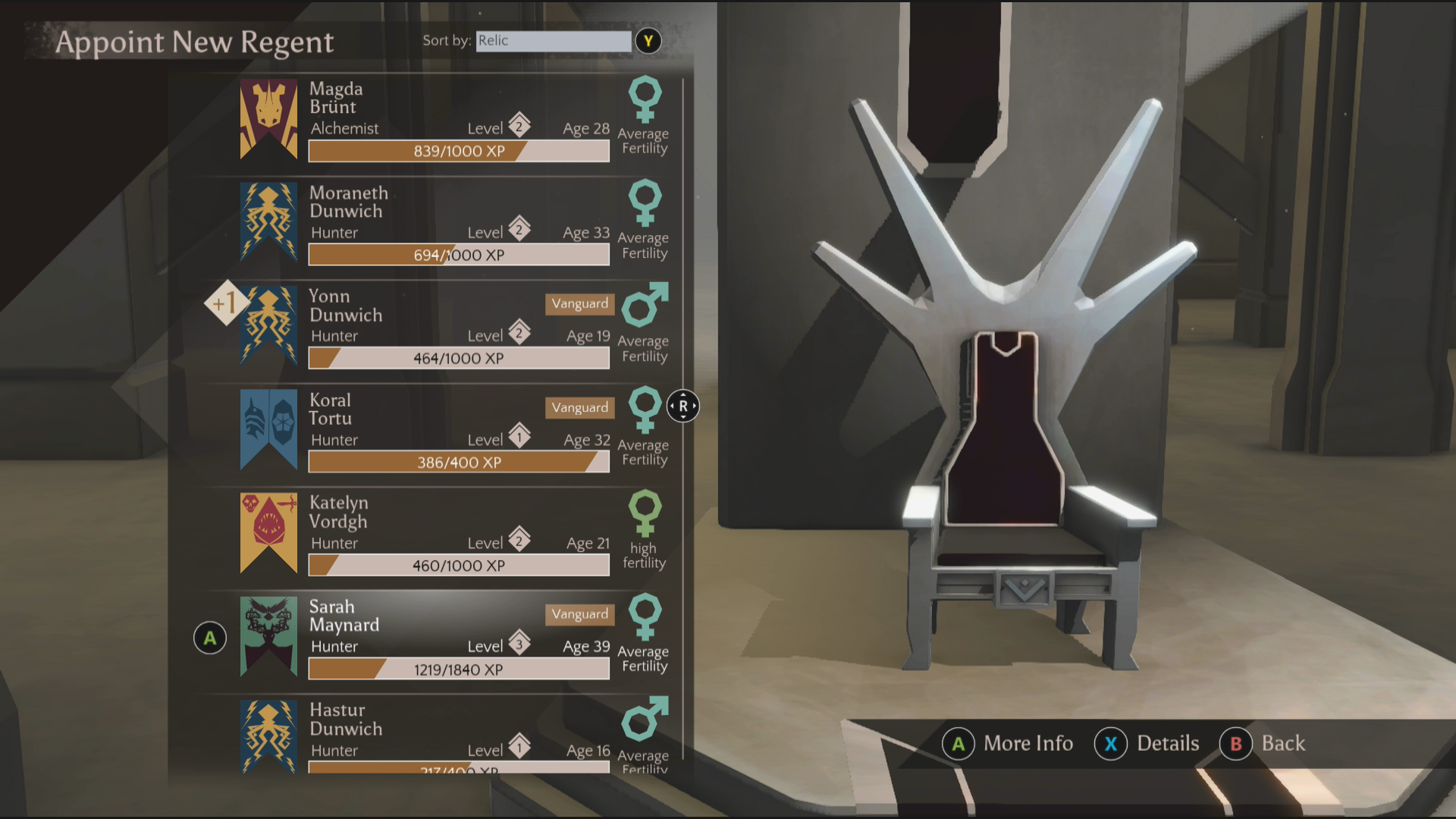 I thoroughly enjoy the strategy aspect of 'Massive Chalice', but the combat system falls short. The comparison to 'XCOM' is inevitable, and perhaps that system has spoiled me. This game seems to emulate it quite a bit, but doesn’t go nearly as deep into the combat mechanics. Most fights are simple slugfests with little opportunity for complex or unorthodox tactics. Units can use more abilities as they level up, but not very many. The difficulty comes in not how the enemies behave (which is to say, quite predictably), but in their numbers, which are crowded and relentless. 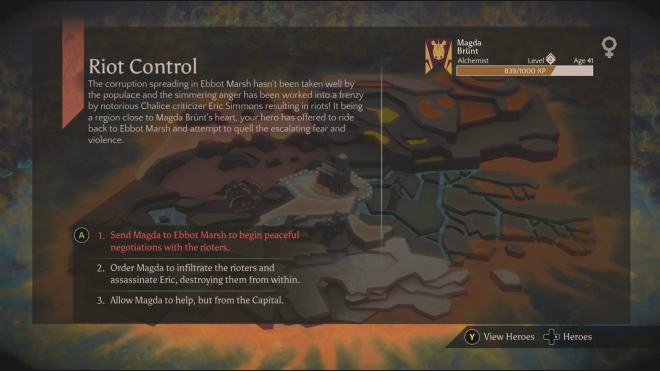 'Massive Chalice' has a blocky, crystalline art design that turned out nicely. It doesn’t have dazzling effects, but does have its own pleasant style. The battlefields are colorful, alien worlds with strange landmarks and flora. A pastel or brushed overlay is not uncommon on many textures. 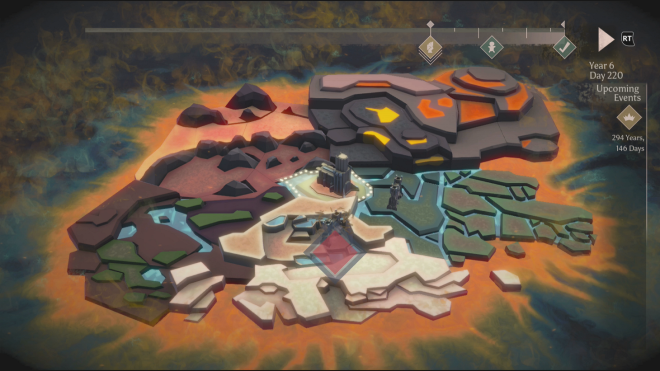 The voice acting is mostly limited to the Chalice itself, which has a disembodied male and female voice that casually bicker with each other and educate the player. Both of these actors are excellent and it is their conversation that imparts Double Fine’s trademark humor and snappy writing. The soundtrack has an alternatingly light, inspiring tone and a deeper military one.

Much of the game’s content is procedurally generated, so each playthrough can be very different. That being said, the relatively shallow combat doesn’t improve much with age, and the early game in particular can be tedious. The gameplay became more rewarding the farther along I progressed, however. The new classes, abilities, equipment, and research serve to liven things up some. 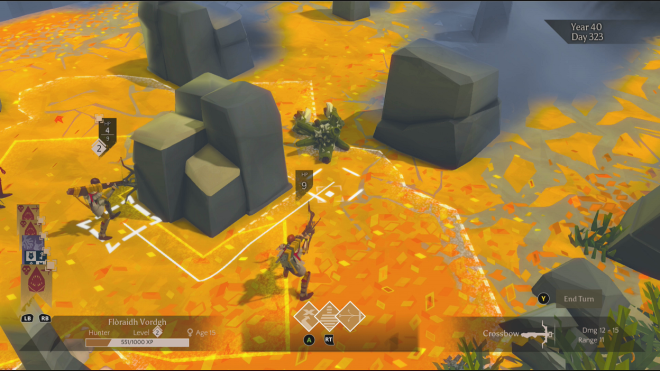 Double Fine has produced a good tactical strategy game with 'Massive Chalice'. It wears its inspirations on its sleeve, but also brings some of its own ideas to the table. It’s not without its faults, but if you can look past those, you may find an engaging strategy experience.