The Game Itself
2.5 Stars
The Video: Sizing Up the Picture
2.5 Stars
The Audio: Rating the Sound
3 Stars
Replay Factor
3 Stars
Bottom Line
Skip It

No Time to Explain

'No Time to Explain' was first released in 2011 as a Flash title on Newgrounds, where games like 'Alien Hominid' and 'Super Meat Boy' also had their humble beginnings. It has since been Kickstartered and planned for release on various platforms. It is developed by tinyBuild Games, which has also worked on 'Boid' and 'Divide By Sheep'.

'No Time To Explain' is a 2D platformer with a movement mechanic that changes every few levels. The most common method of propulsion is a giant energy beam that pushes the character in the opposite direction that it is fired, and can send the character wildly hurtling across the level. Other methods include a shotgun blast, a swinging parabolic arc, and sticky wall-climbing. Every stage has a set of levels that are basically puzzles that must be solved with the movement mechanic. At the end of each stage, a huge boss appears and the player must kill the creature with their laser while simultaneously avoiding death at the hands of bile pools, lava, falling rocks, and other environmental hazards, not to mention the boss itself. 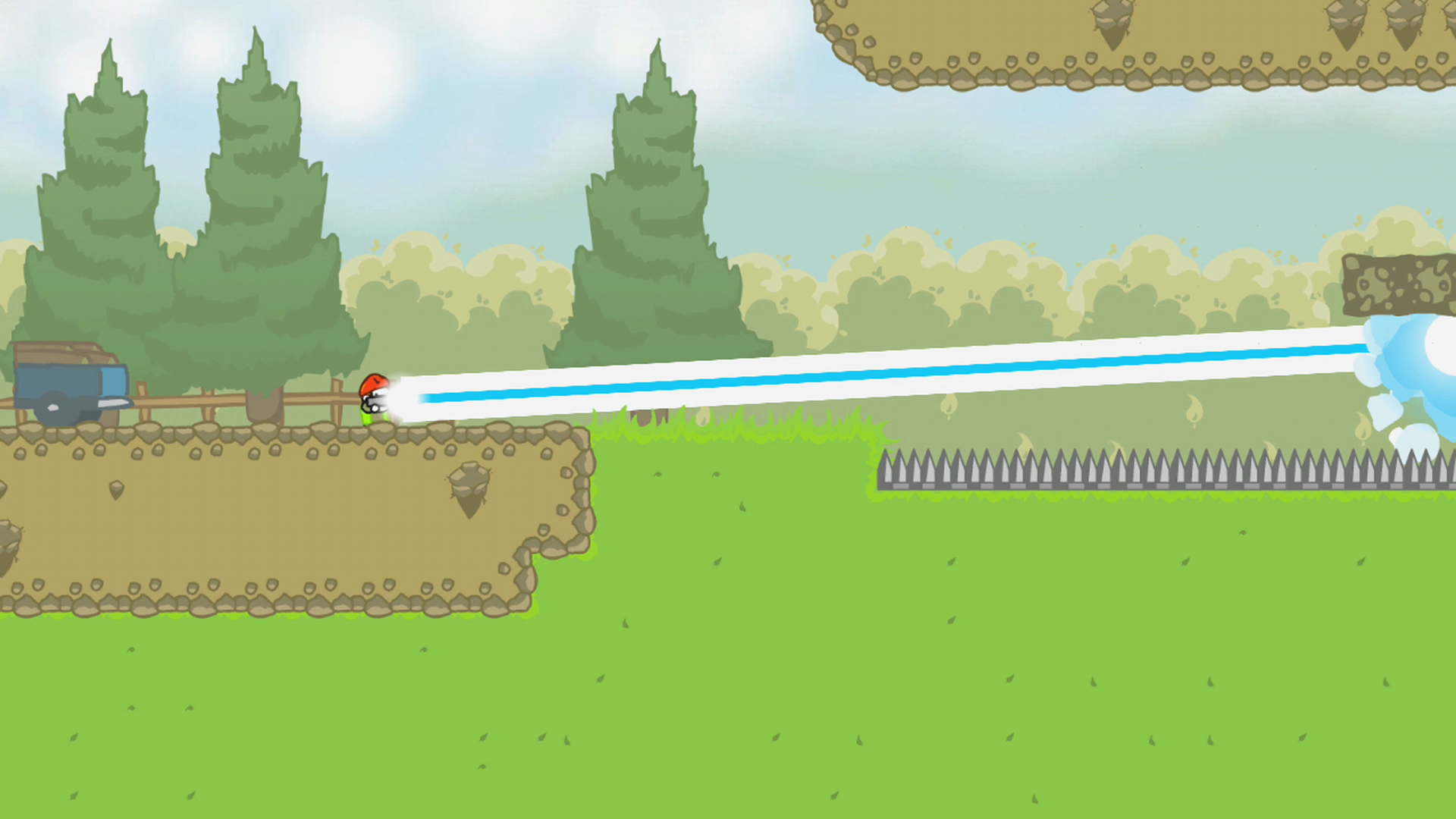 Each level is tiny, consisting of a single puzzle that can often be solved and completed in less than a minute. The execution can be problematic, however - the puzzles require very precise movement, but the controls do not offer much precision. This led to many, many deaths as I attempted to launch myself through whatever gauntlet was in front of me, trying to get just the right arc or angle without impaling myself on spikes or careening off the map. Later attempts were better as I grew more skilled at reigning in the enthusiastic energy beam, but there was always a maddening element of randomness threatening to rear its ugly head. There’s no tutorial naturally, as there’s just no time to explain. 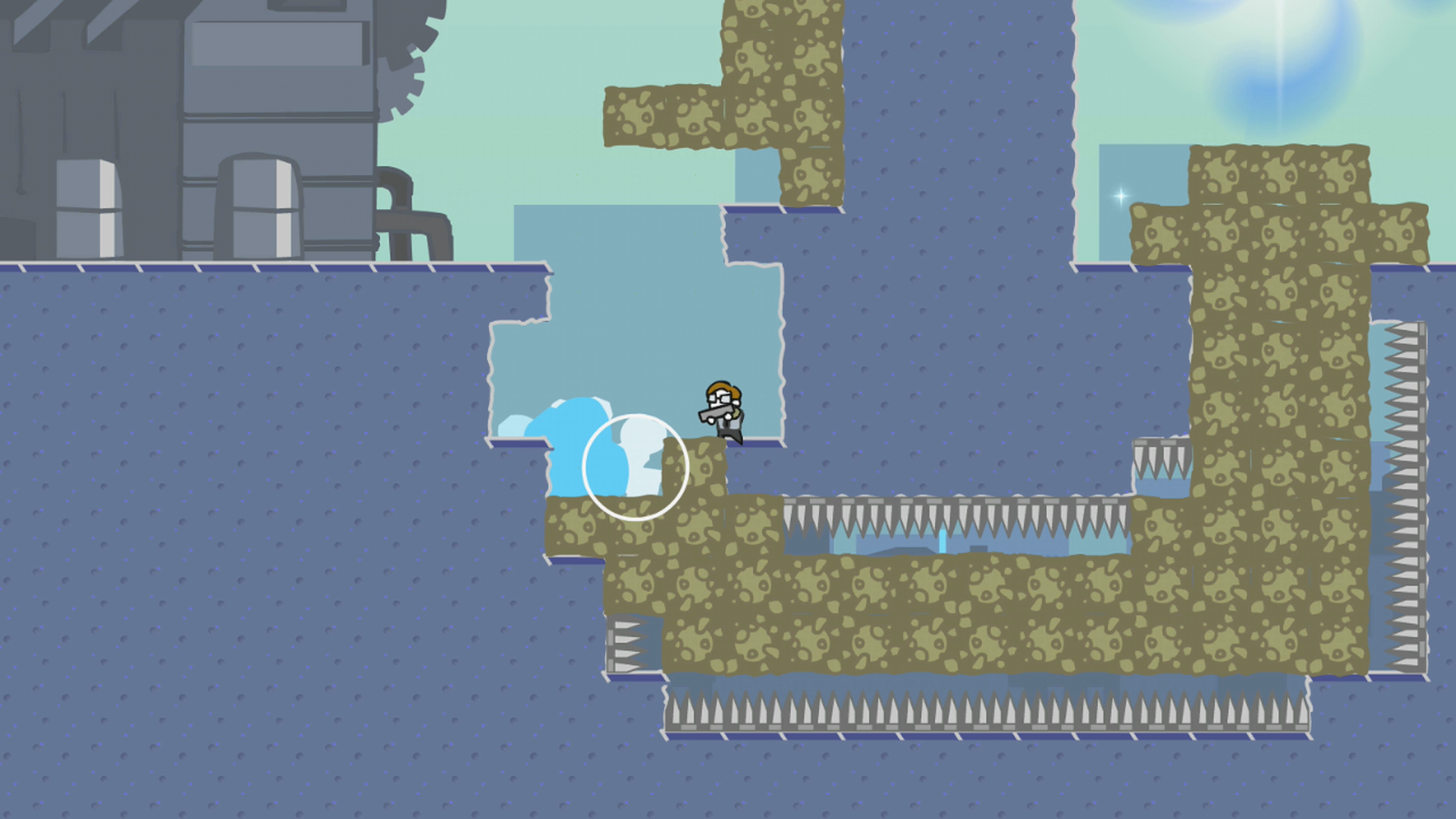 The level design doesn’t help, with some levels much too easy and others much too difficult, with seemingly no rhyme or reason. The thumbstick controls push forward too hard and cannot be throttled, so I always felt pressured to go max distance on each jump. Maintaining a series of small, controlled jumps is nearly impossible, because the reticle resets itself after each one and then fights me when I try to push it just a little bit. Many of the levels I completed accidentally, as frustrated button mashing would eventually get me into the goal.

If the levels weren’t bad enough, the boss fights are almost enough to make me want to throw in the towel. They are just not fun, with cheap AI behavior and hinky clipping layering on top of the shoddy controls to make a beautiful cake of ragequit. The squirrel boss in particular is almost poetic in its badness.

Now that I’ve gotten the bitching out of the way, I’ll comment on what made me keep playing. The concepts behind the platforming are solid, even innovative sometimes. It’s only their implementation that leaves something to be desired. When the mechanics do work, 'No Time to Explain' can be fun. High points include a roller coaster-like upside-down level, combined with a rolling character not unlike Sonic, as well as a set of floating circles that twist and bend the energy beam in every direction. Sadly, these moments are a minority. 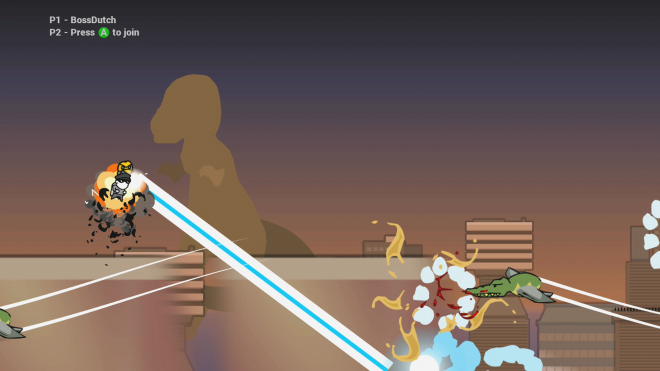 The non-Flash versions of 'No Time to Explain' use a block system, instead of the hand-drawn animation of the original. That being said, it still looks mostly like a Flash game. The colors are never very bright or expressive - the whole thing has a subdued, washed-out palette. The game has a tendency to freeze up at least once per level, typically for about five seconds - just enough to make me think it’s died. 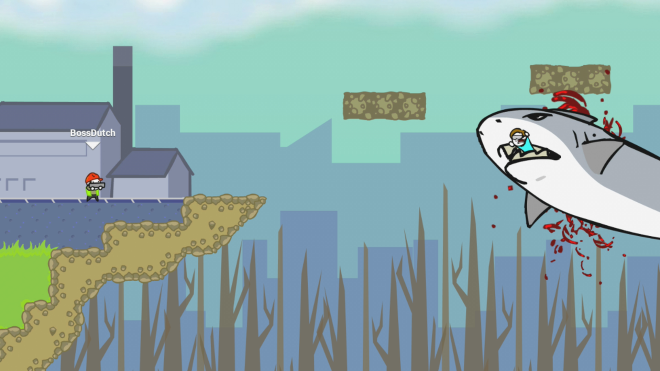 The game has a fun 8-bit arcadey soundtrack that invites nostalgia. It adopts an 80s action film macho feel during the shotgun and boss segments. There’s only one voice actor, and he is limited to shouting non sequiturs at the beginning of each level while he is ritually eaten by a shark or some other creature.

I press ganged a friend to play local co-op with me, and together we struggled through the painful platforming. We alternately attempted to help each other solve the puzzles and developed inventive ways to push each other off of ledges to fall to our doom. Both activities are more fun with a partner. Thankfully, the boss fights are much easier in co-op as well.

There is little content in 'No Time to Explain' outside of the critical path. Individual levels cannot be replayed - each stage can only be played from the beginning. The entire game can be finished in less than five hours, less with a partner. The only collectibles are hats, some of which are very lovely, such as the totem pole hat. 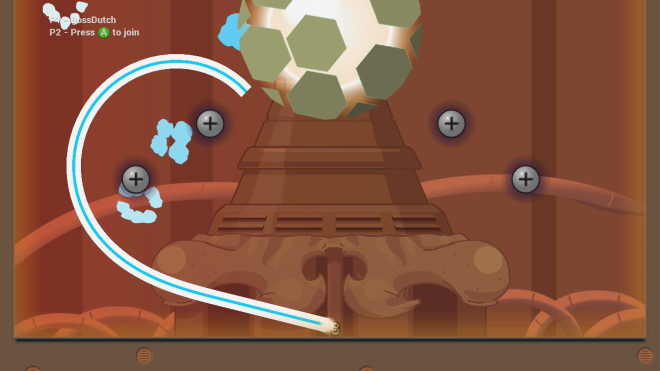 'No Time to Explain' has promising gameplay, and perhaps tinyBuild will be able to work it into something more manageable with future releases. As a precision platformer it struggles greatly on the Xbox One. It’s not a bad game, and that just about sums it up.