The Game Itself
4 Stars
The Video: Sizing Up the Picture
4 Stars
The Audio: Rating the Sound
4.5 Stars
Replay Factor
2 Stars
Bottom Line
Recommended

King's Quest - A Knight to Remember

'King's Quest' was first released for IBM computers in 1983. It was developed by Roberta Williams, a pioneer in the genre of adventure games and founder of Sierra, a publishing house that nearly died when Activision merged with Vivendi in 2008. Adventure gaming hit a steep decline in the early 2000s, but have recently been making a comeback on both console and PC. Sierra has been resurrected, and so has 'King's Quest', although now it is being developed by The Odd Gentlemen studio as a five-episode series. 'King's Quest - A Knight to Remember' is the first episode.

'King’s Quest: A Knight to Remember' differs from its predecessors in that it is not strictly a point-and-click adventure game. It has larger levels with a full range of motion, but that doesn't mean this is a game in the vein of 'Assassin's Creed.' But though it's not an action game, there are occasionally other modes that come into play, such as an on-rails bow and arrow shooting scene in the prologue that I wasn’t expecting (but it turned out pretty well). The main character, Graham, completes each level by picking up items and then using them to solve puzzles. It’s a simple system and one that may not be appealing to everyone. Like most adventure games, 'A Knight to Remember' is somewhere in between a video game and an interactive visual novel. Most of the player’s involvement is limited to dialogue choices, puzzle solving, and the occasional quick time event. 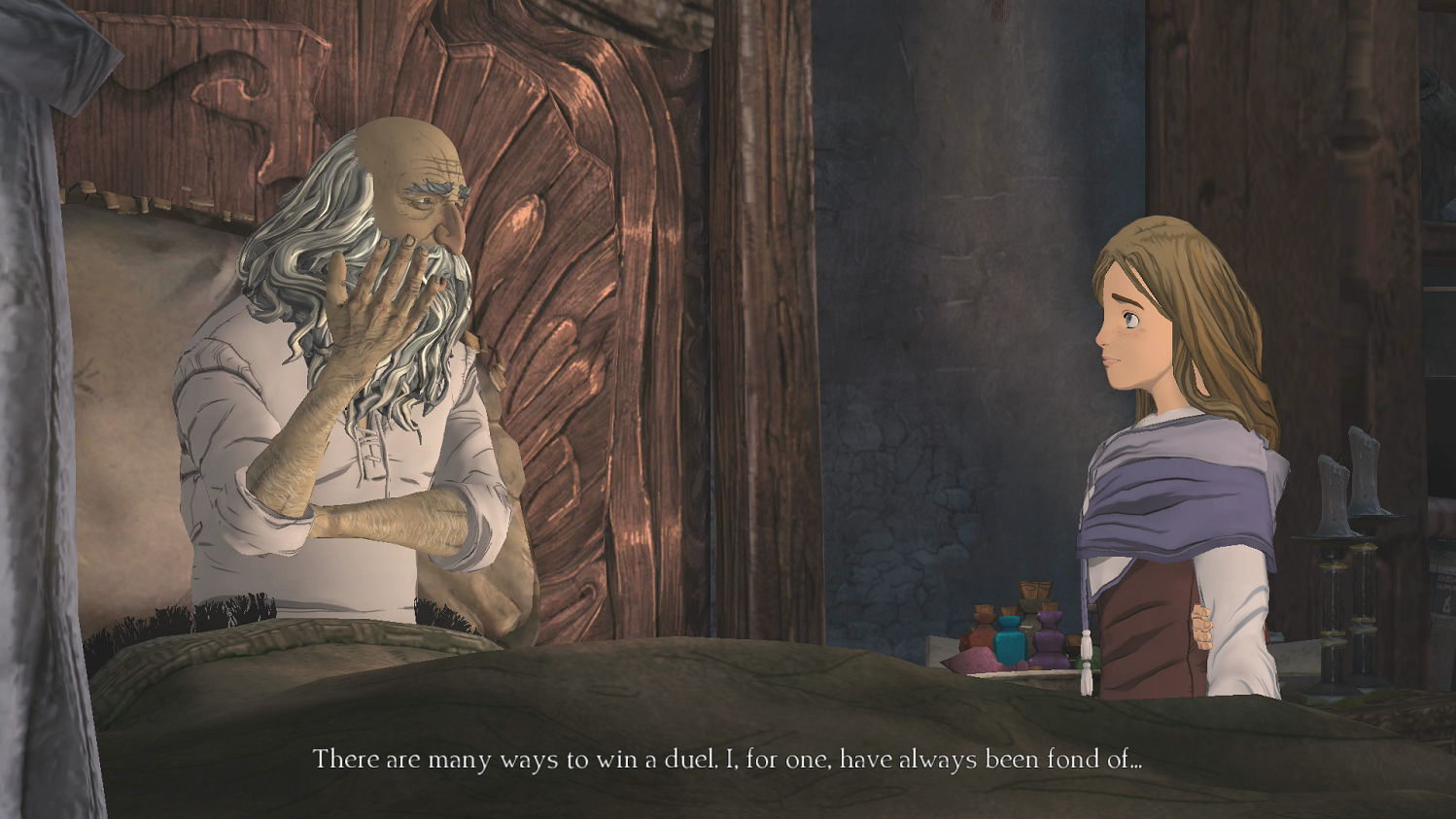 The Odd Gentlemen has been careful in how they characterize this new 'King’s Quest', hesitating to refer to it as either a sequel or a remake. In truth it has elements of both, but no familiarity with the series is required to enjoy it. Much of the action is conducted by a young man named Graham who lives in a fantasy kingdom called Daventry. His quest to become a knight, and then presumably a king, is narrated by his older self. Old Graham is quite bedridden and loves to regale any visitor who will listen with tales of his youth. His most ardent fan is his granddaughter Gwendolyn, who is apparently the only person who encourages his storytelling. There are some scenes with Gwendolyn that show how her grandfather’s stories affect her decision-making, but Graham is the centerpiece. 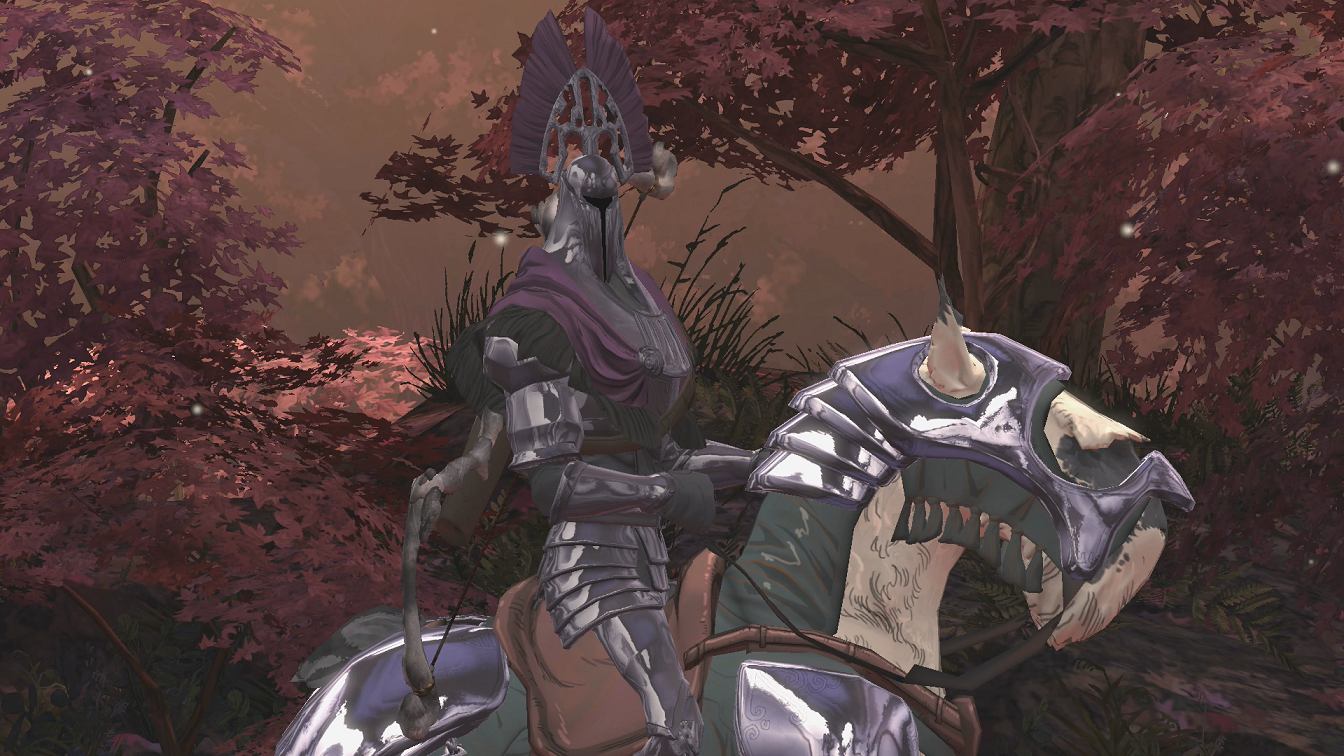 'A Knight to Remember' has an excellent script. The characters constantly jab one another with witty lines, and old Graham pushes against the fourth wall whenever the players makes a questionable decision (such as attempting to use a newfound hatchet on every interactive object, a common tactic in adventure games). Any questionable or strange behavior by the player is remarked upon by Gwendolyn, who approves, and who is then refuted by Graham. Graham’s correction can hold clues for how puzzles are to be properly solved. This kind of presentation makes for a more immersive adventure game, one that watches me while I play and pays attention to the weird things I do when playing in single player. It’s not as creepy as I’m making it sound - rather, it’s a fun and novel mechanic. 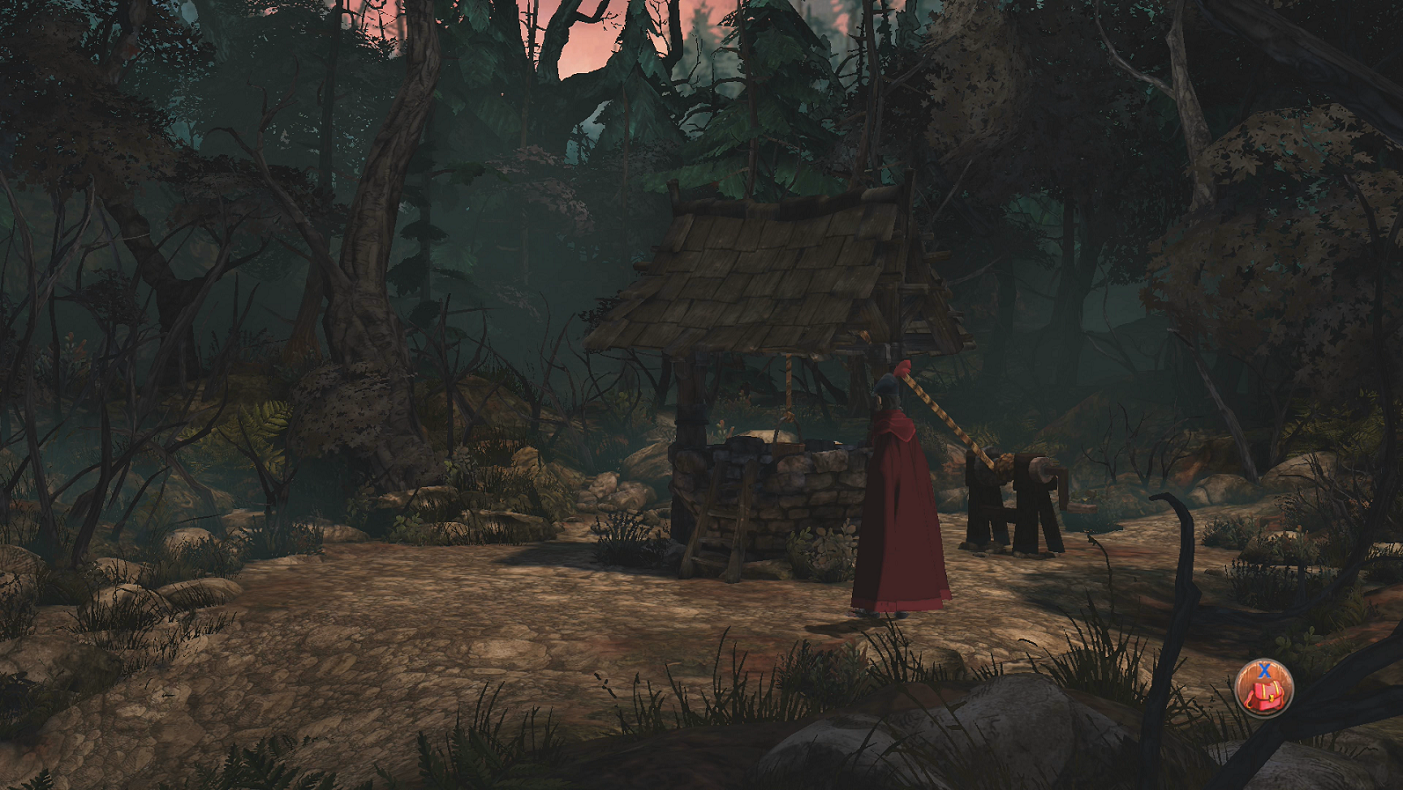 The puzzles aren’t as tough as old-school style point and clicks like 'Grim Fandango' and 'The Book of Unwritten Tales', and that’s ok. What it offers instead is a lot of humor and even some moments of humanity, especially when old Graham interacts with Gwendolyn. The side characters are where all of the laughs are found, with gems like excessively bureaucratic guards, a manic traveling merchant, and a diminutive armored knight who manages to be both helpful and kind of abusive. When in conversation, Graham often gets choices as to how to proceed - he can be bold, crafty, and on occasion, nice. 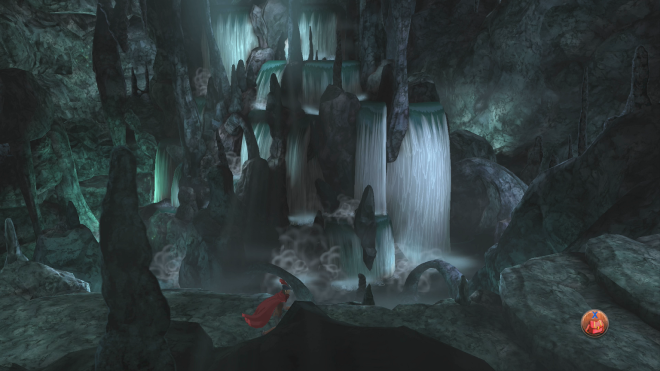 'King’s Quest' has a very distinctive visual style. The characters have an animated look reminiscent of pre-computerized rotoscoping, like 1978’s 'Lord of the Rings' and even some of the mid-20th century Disney stuff. The rotoscoped characters are then superimposed on a more modern background. The environmental textures tend to pixelate up close, almost to a 'Minecraft' level, but the fluid, almost surreal movement of the characters is a success. It gives the game a nostalgic feel, like I’m playing an old fairy tale cartoon. 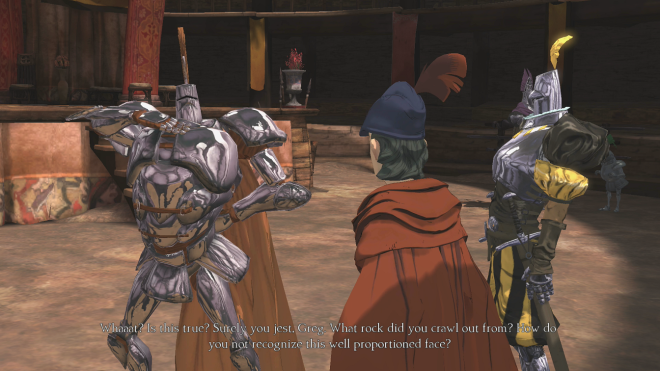 'A Knight to Remember' has a top-notch voice cast, led by none other than 'Taxi' and 'Back to the Future' actor Christopher Lloyd. Wallace Shawn (the excitable t-rex from 'Toy Story') plays young Graham’s mentor during his knight pageant. Twelve-year-old Maggie Elizabeth Jones does a great job as Gwendolyn. The soundtrack is lovely, and like the video, evocative of the animated epics of yore.

The Odd Gentlemen have promised open-ended puzzle solving and some non-linearity in this new series, neither of which are heavily on display in the first episode. I did make some choices that may come back to haunt me in future episodes, but I don’t particularly feel like the story would have changed much if I had altered my save. 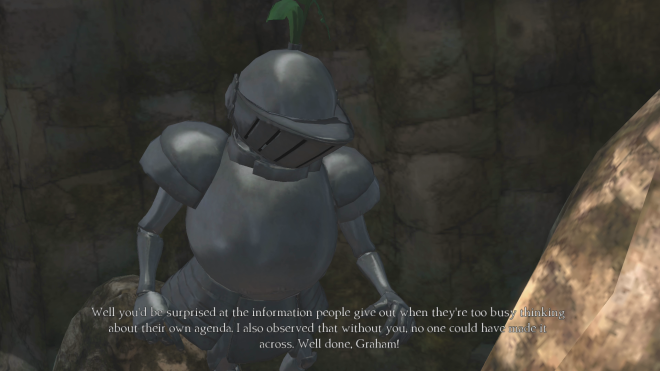 The first entry in the new 'King's Quest' has puzzles, a fun visual style, and a lot of laughs. This is a very carefully crafted game - The Odd Gentlemen have managed to carry forward the essence of the 'King’s Quest' series into the modern age without sacrificing any of its charm. 'A Knight to Remember' is a solid first entry in what will hopefully become an excellent series.