Like some sort of new-fangled combiner, Activision, Hasbro and PlatinumGames have come together to create 'Transformers Devastation.' This new game has no specific relation to any previous Transformers titles, and in fact, leans heavily on the gameplay design of games like 'Bayonetta,' 'Metal Gear Rising: Revengeance,' and even 'DmC.' In terms of story and the game's very distinct looks, the recent 'Generations' flavor of Transformers is the cited reference; however, it should be pretty clear that the games cell-shaded look is meant to invoke memories of the original TV cartoon and 1986 movie.

With five playable Autobots and 150 upgradable weapons, 'Transformers Devastation' is one of Activision's more low-key titles, but for longtime 'Transformers' fans, is this just another cash-in?

When reviewing games it can happen in a rare, once per year case, that a game comes along as a guilty pleasure. Often times, games with striking, avant-garde visuals, or gripping narratives end up with passive or even broken gameplay. When such games are $15 indies, they are easy to champion.

With 'Transformers Devastation,' there are all kinds of red flags that suggest that Activision was ready to release a 'Transformers' game, but didn't want to spend the kind of time that went in to the High Moon 'Cybertron' games. For one thing, nearly every asset in the game, from character models, to bosses and levels, is recycled with great frequency (and no this isn't meant to ape 'Destiny' design). 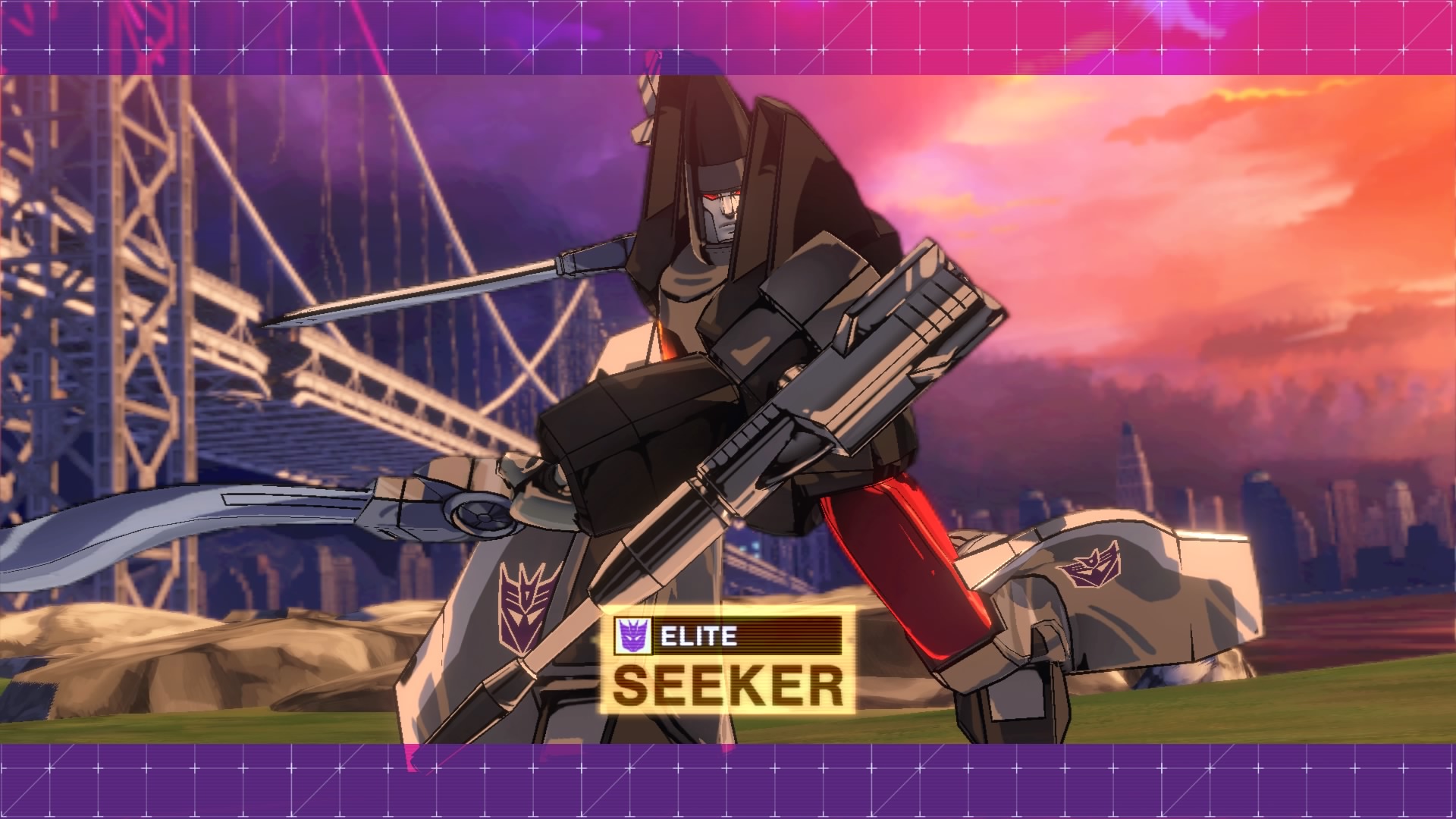 At the same time, when the game does deviate to offer something more distinct design wise (overhead sections, red energon, fixed turrets) the gimmick comes off as a roughly implemented diversion. 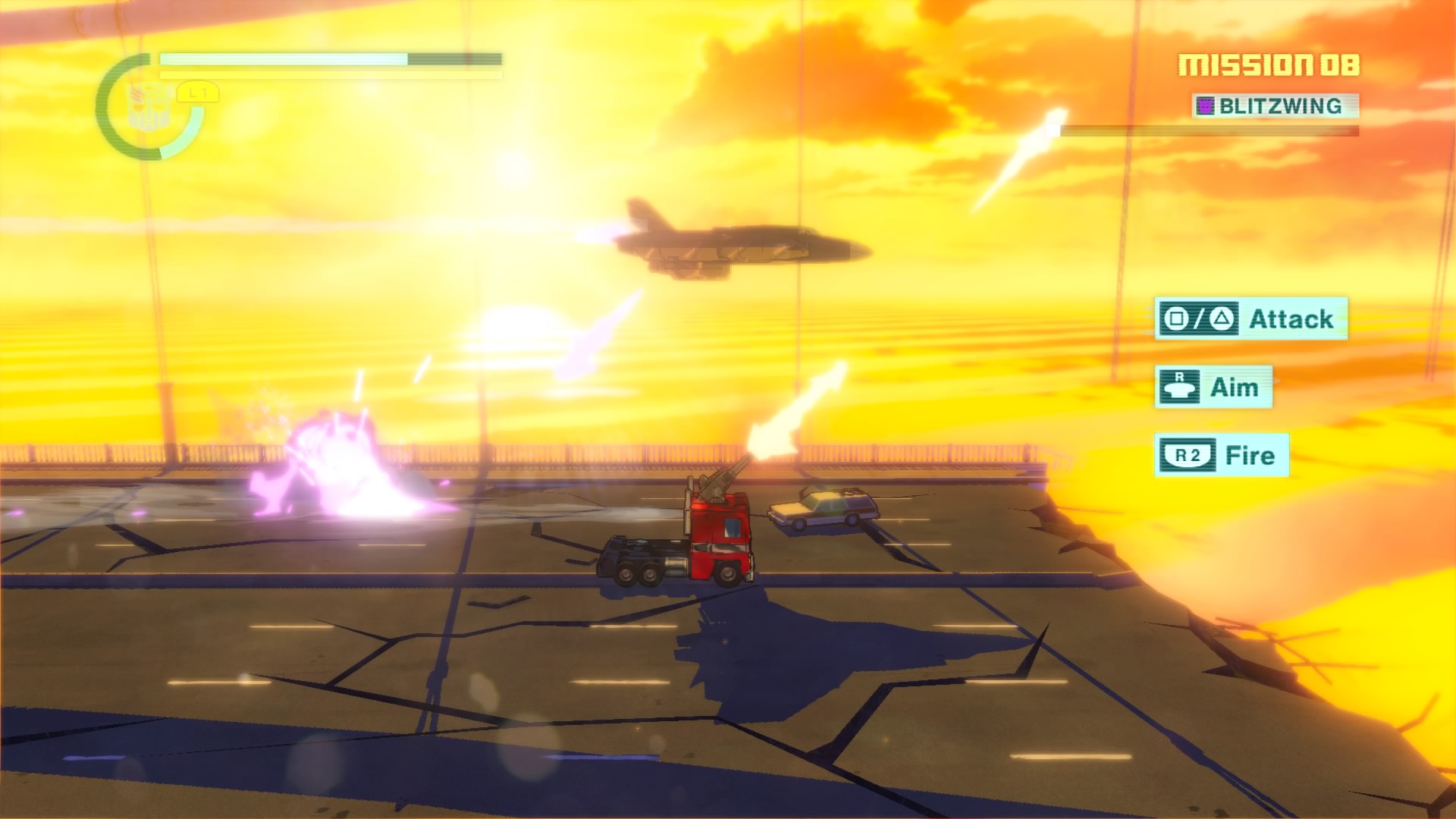 The gimmick might reappear (especially in a bonus level or challenge level), but it's still a one-off implementation. The gimmick isn't advanced or combined with others in a special way.

Faced with what I can only guess was limited time (though not necessarily a tight budget), PlatinumGames has developed one of my favorite games of 2015. I say this as an old-school fan of 'Transformers' but only a casual fan of Platinum's other titles.

To start, the game has the player switching between playing Optimus Prime, Bumblebee, and Sideswipe. After the first chapter, the switching becomes optional and Wheeljack becomes playable. This is followed later by Grimlock. 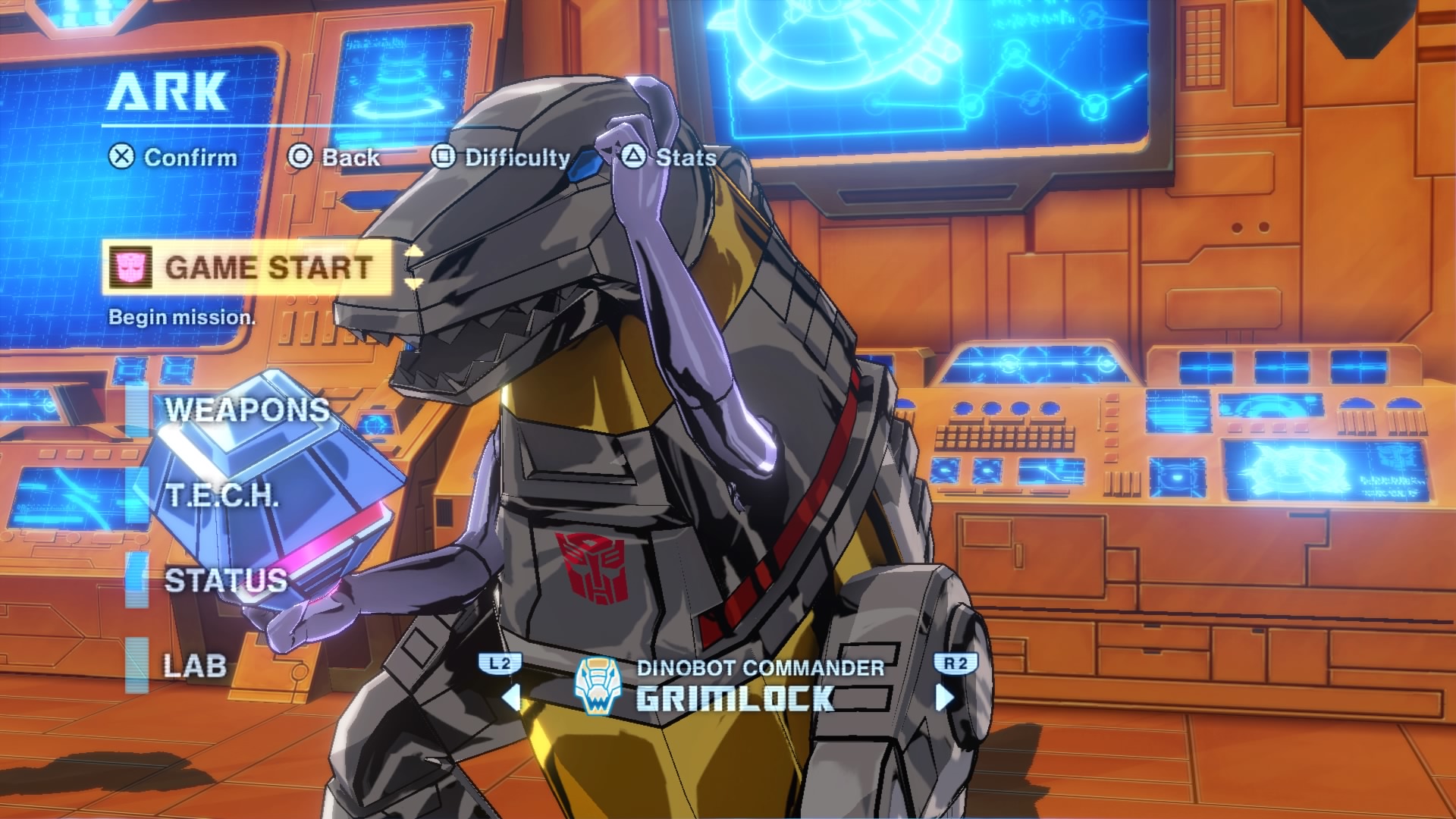 And that's it. There are no playable Decepticons. After spending a dutiful amount of time with each one, I spent most of the game with Optimus Prime. This is for a couple of reasons. First off, he's Optimus Prime in a purely awesome form. Second, he can use most of the game's best weapons. And finally, his unique ability (press L1), which has him transform and spin around in a quick circle with a powerful attack that often sees his trailer make a killer appearance, is far too fun and effective to be left on the bench.

And that is the secret to the game. Behind the unique visuals (more on that later), the audio joy, and the classic characterizations, is a fun combat system. I recall seeing the early footage and thinking that it looked like the player could use blasters, fists, and vehicle-based attacks without breaking stride, and indeed, it's even better. On Scout difficulty, it's easy enough to button-mash and have cool things happen, but stepping up to Commander, and dodging (to get the witch time like attack window) becomes a way of life. Vehicle mode is a part of combat for sure, the simple light attack x three followed by a transform and smash into the enemy finisher is a wonderful core move, but there's more to it. 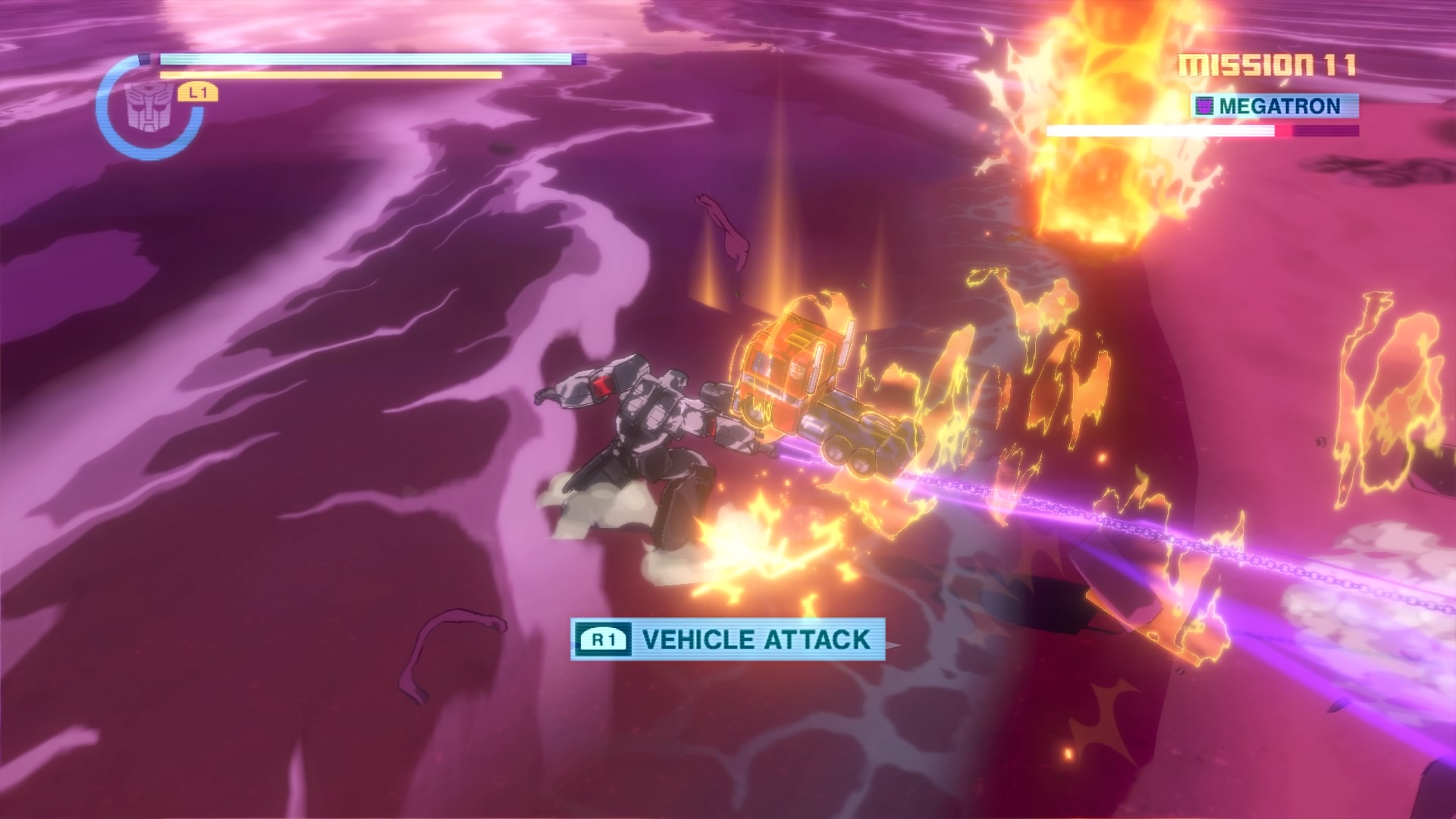 Transforming during combat flows much like it in the cartoon and movie, as a natural part of the move set. The result is a frenetic combat that system that for me is more accessible (and casual) than 'Bayonetta' but also more fun. 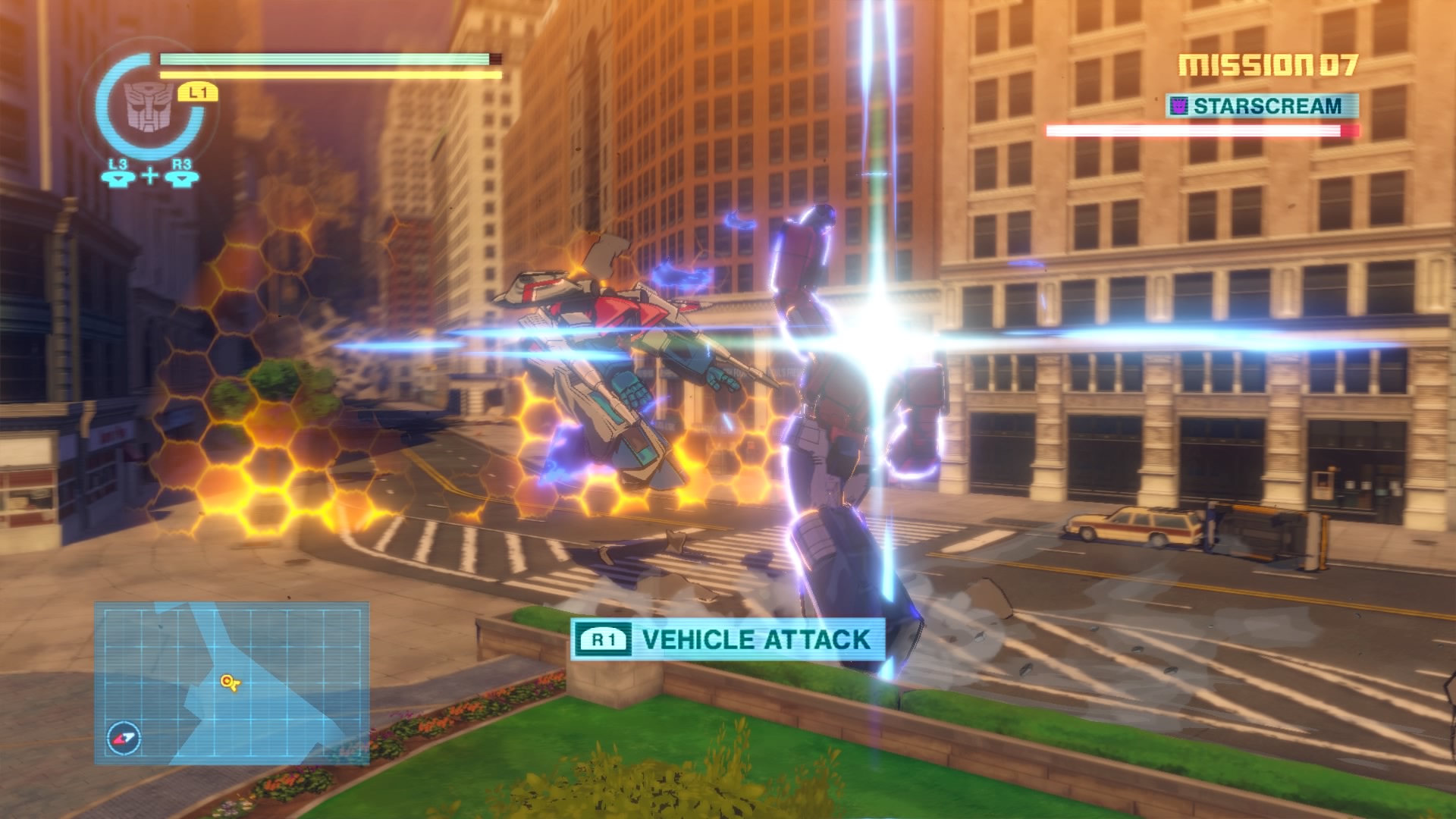 With a truck and three cars, the game expects the player to drive (for chasing and outrunning) in certain sections, which is even more evident when using Grimlock. Grimlock can run fast via button-tapping, so he's viable but it is an adjustment. Such adjustments can be quite common in the game as the ranged weapons (and to a lesser extent the melee weapons) vary to such a degree that simple challenges can be made hard and vice versa. In the campaign, the chosen Autobot, his weapons, skills and so forth can only be changed at special points. These points send the player to the Ark, which, is an exciting and fitting scheme for TF faithful fans.

The combat system made me smile all through the game's short campaign, and I also feel that a player that had never heard of 'Transformers' and thus had no cartoon nostalgia, could fall in love with 'Devastation's combat. 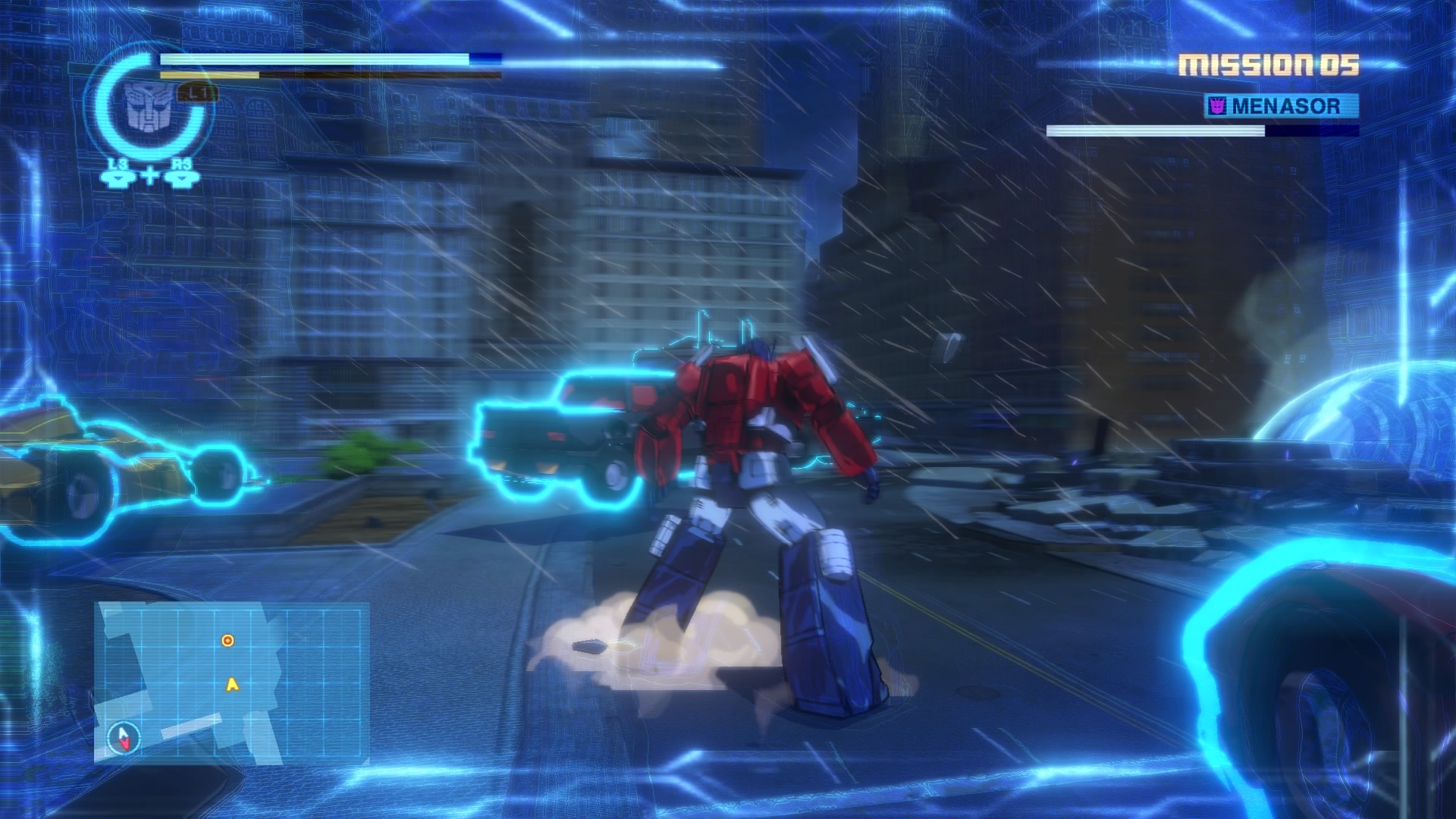 As a veteran gamer, however, I must point on out that 'Devastation' does rely on a another kind of nostalgia. It's a short, but replayble third person action game that would be right at home on the PS2 but seems like a throwback in these days of mandatory 40 hour openworld collectathons. But while a lot of those games wear thin fast, I never got tired of fighting the bosses or arena based mobs. Outside of the obvious combat/arena areas, level traversal keeps things moving quickly. The game's weapon system is surprisingly deep. Not only are there dozens of iconic weapons to collect, but each one can be synthesized en route to upgrading another weapon. The only drawback is that it's not always worth synthesizing the more common ones and upgrading the better ones because usually even better weapons can be found in-game. Even so the variety in looks and in usage made weapon collecting a blast. 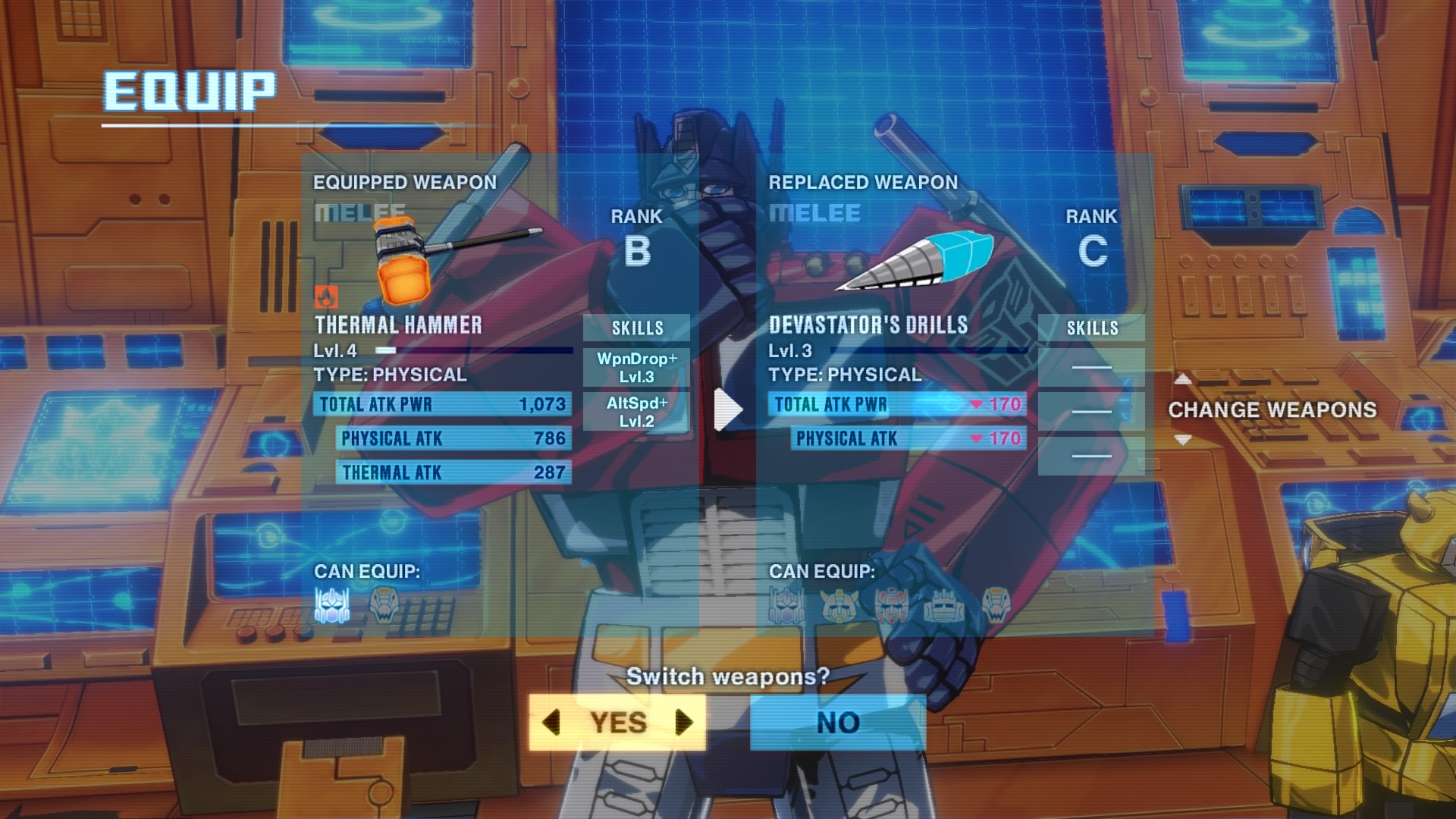 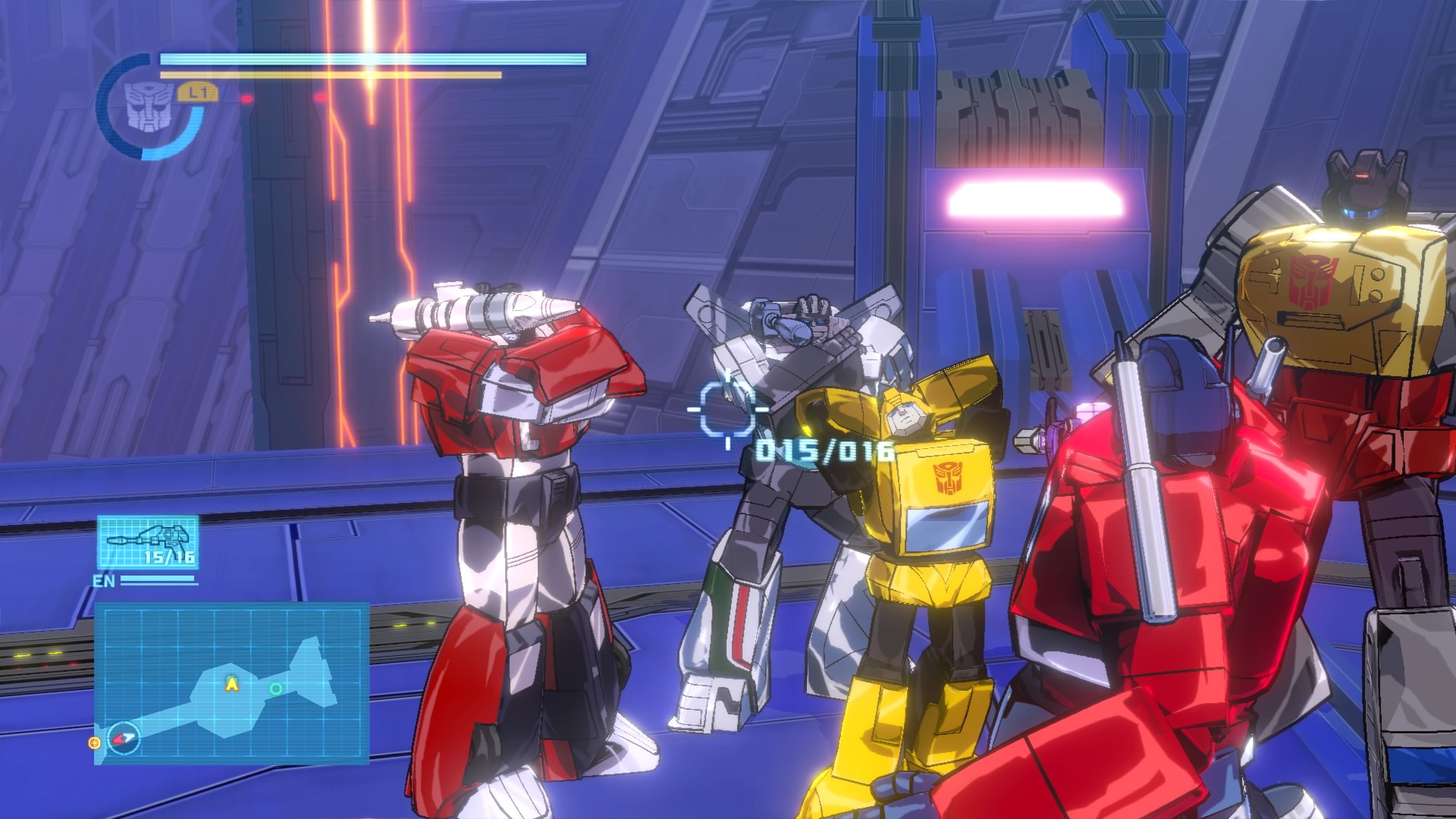 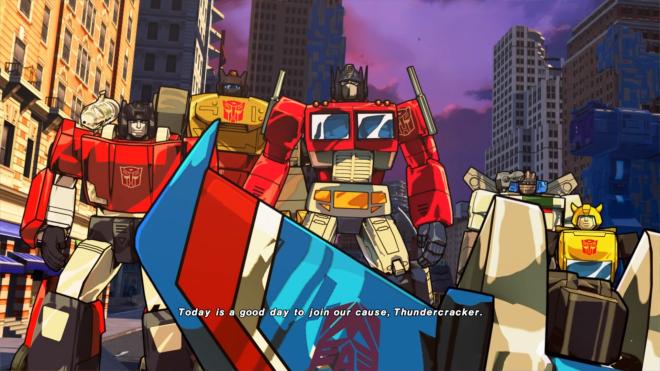 The art design of 'Transformers Devastation' is the game's most striking aspect. Most of these characters have never looked this good in a video game, and that's despite the relatively cheap model geometry. Again, a Japanese studio using smart texture work to pull off an amazing look shouldn't be such a surprise. The look isn't perfectly applied to all. The monochrome Megatron in particular looks a lot crummier than just about everybody else. 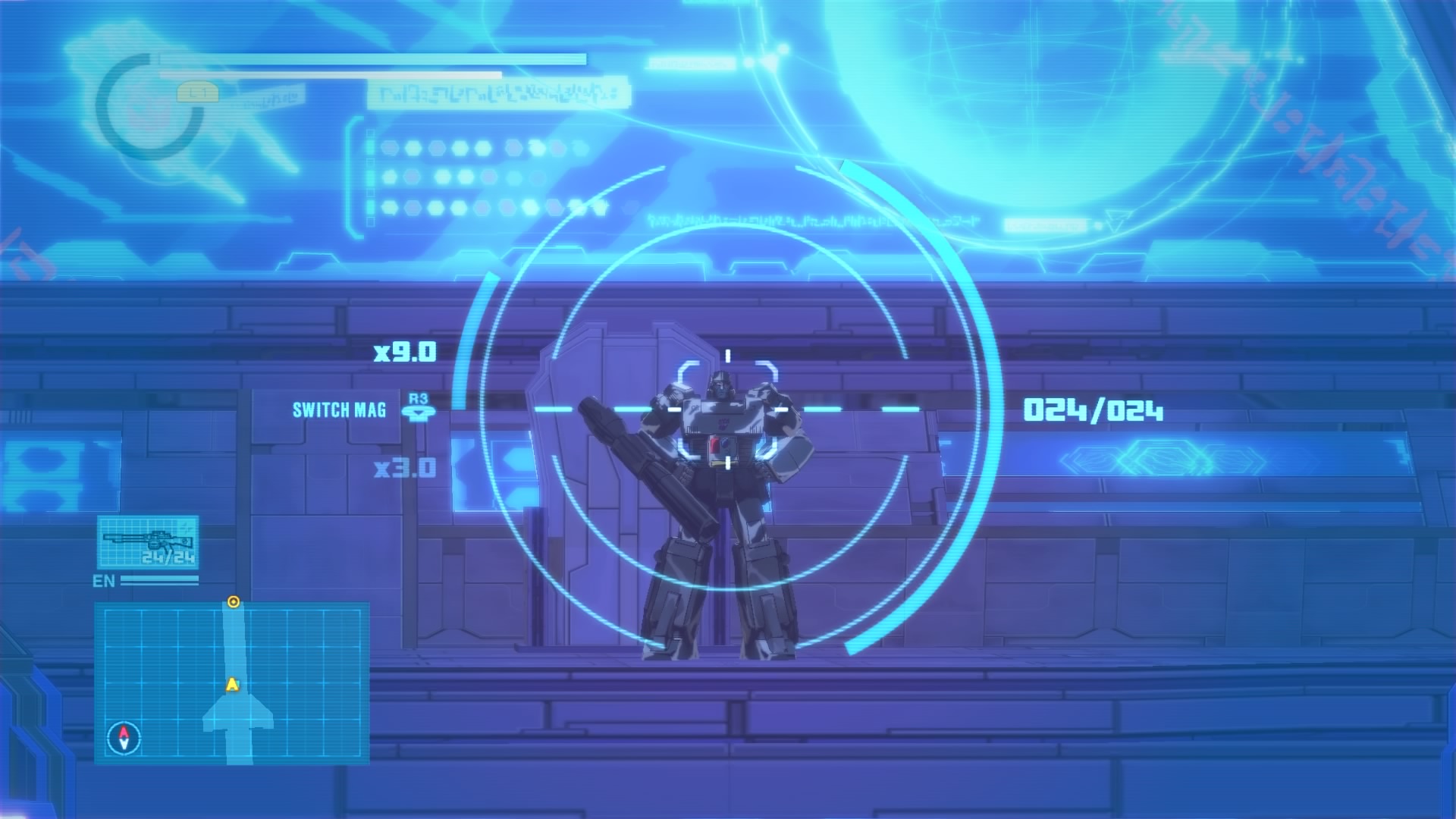 Furthermore, while some of the vehicle designs are dead on (Starscream, Optimus), Bumblebee (for example) has been made intellectually distinct from his vintage look.

For better or for worse, there are primarily only two main environment types used for the entire game, urban and alien spaceship. (There are also sewers and bridges and free fall/float areas, but these feel like subsets.) Environmental detail of any sort is sparse. This in part follows the aesthetic of the cartoon, but it is nevertheless very 'Earth Defense Force' in feel. Fortunately, there is heavy compensation to distract from this bleakness. Not only is there the firework-emitting combat system, but 'Devastation' goes all in with screen filters. I recall seeing gameplay capture and thinking that the v-sync was out of control, but playing the actual game and there is a constant thread of electronic distortion of all sorts (color, spot noise, loss of sync) that is meant to emulate an idea of Autobot vision in combat. It is quite pleasing on the PS4, but doesn't come over well in a Twitch environment. 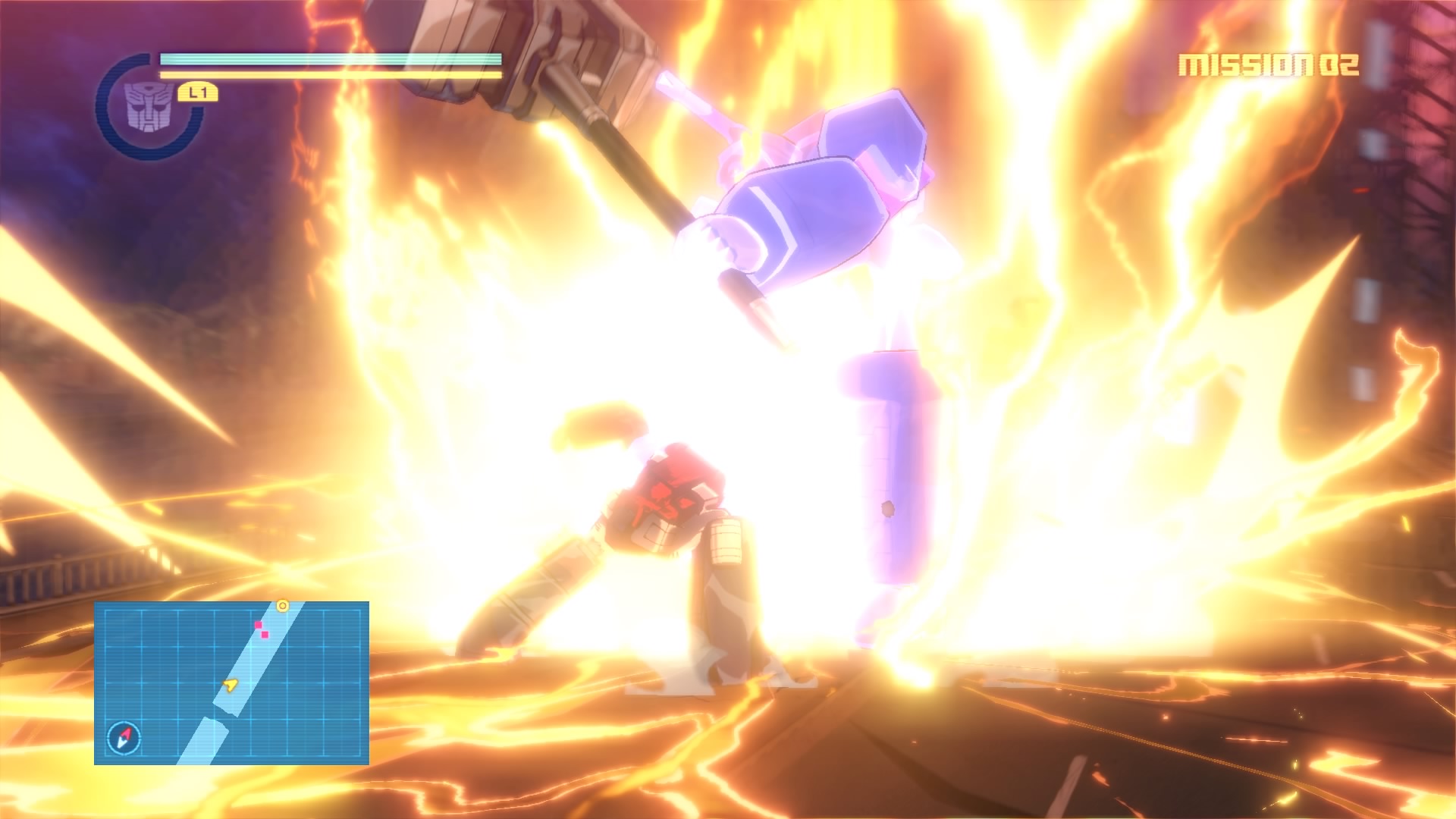 Again, the scaling and shading used on enemies like the Insecticons can be viewed as thrifty, but it all feels put together well.

Of special notice are the transforming animations, which again take after the show and 86 movie. Those movements in the movie which would see Optimus (and everyone else) transform and attack in a single bound happen in the game, but are quick rather than slo-mo. I truly wish this game had a proper photo mode. I took to taking a screenshot at every character introduction just cause. 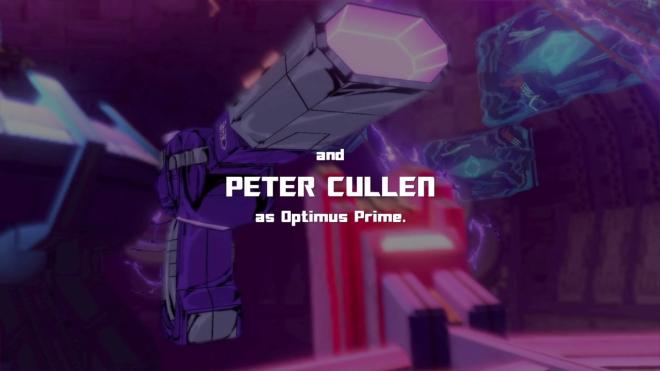 The sound of 'Devastation' is almost wild. The sound effects are of a classic and familiar kind, but I think they could have taken it further. For example, with the Decepticon strafing runs from the jets, there are sounds that could have been added to make them that much more perfect from a fan service point of view.

In an interesting turn, Vince DiCola's soundtrack is possibly more fitting for PlatinumGames than for the Transformers property. It's those guitar rifts in combat that partly miss the 'Transformers' mark to me in spite of everything. In contrast, the music used for the Ark really grew on me. 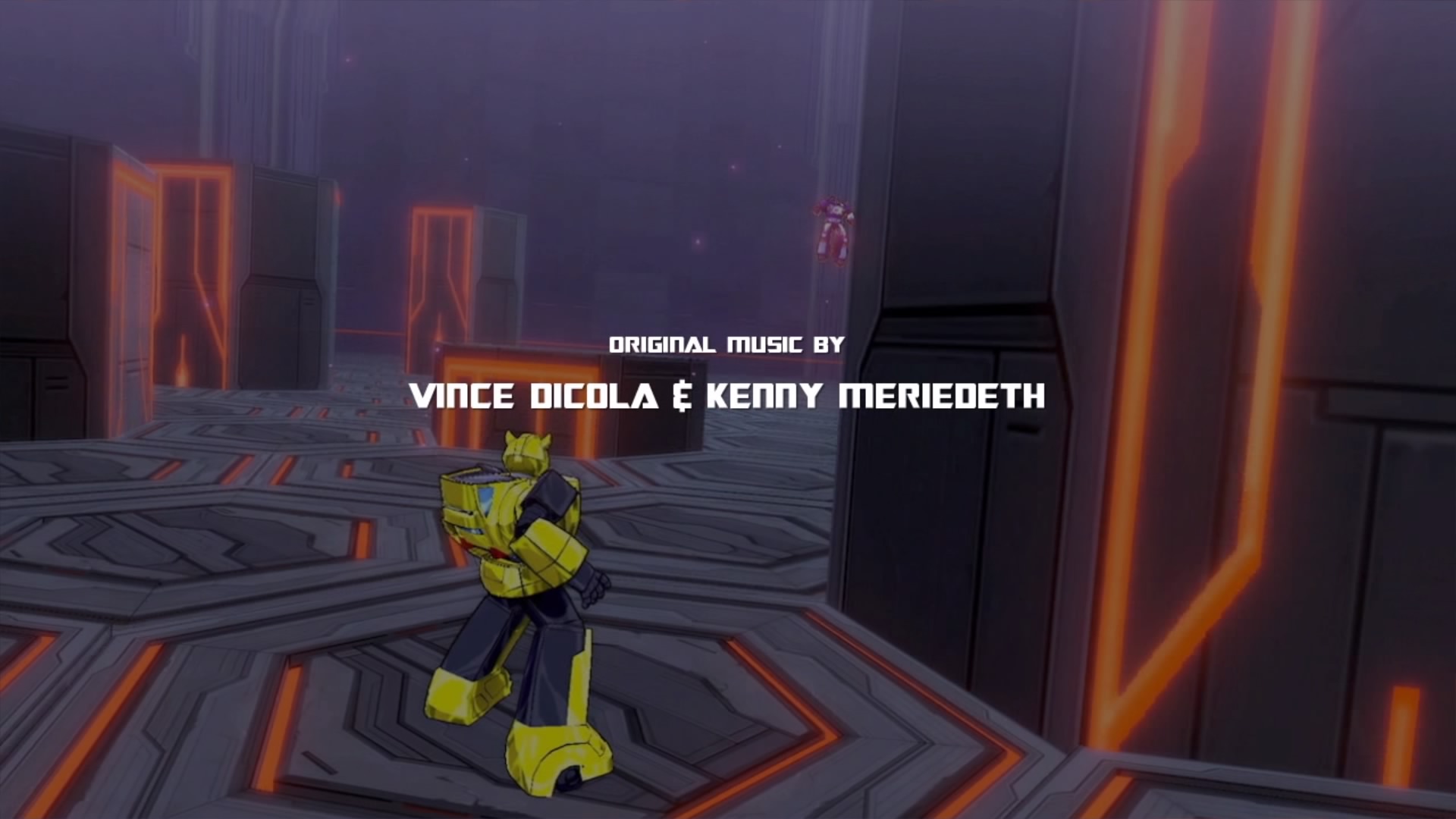 The voice acting is one of the game's stars. Peter Cullen as Optimus is excellent as always, but I think my favorite was hearing Soundwave. (Incidentally, Soundwave never transforms, but he does deploy his minions a few times.) Fans won't be able to ignore how so many of the lines have been cleverly switched around and nested against character. Be prepared, however, as some of the voice acting (certain voices really) is amiss.

The game's story is sort of throwaway, and sort of indulgent at the same time… it's like an old Saturday morning cartoon. The fights and the characters are of greater concern than the overall plot. Considering the scaling difficulty that can be unlocked in the game, replay potential is quite high. Usually, I am not really concerned with getting better at these kind of action games, but 'Devastation' is a big exception. Being an Autobot combat virtuoso at the tougher difficulties has large appeal, and the five playable, upgradable, and customizable characters make for some attractive variety. 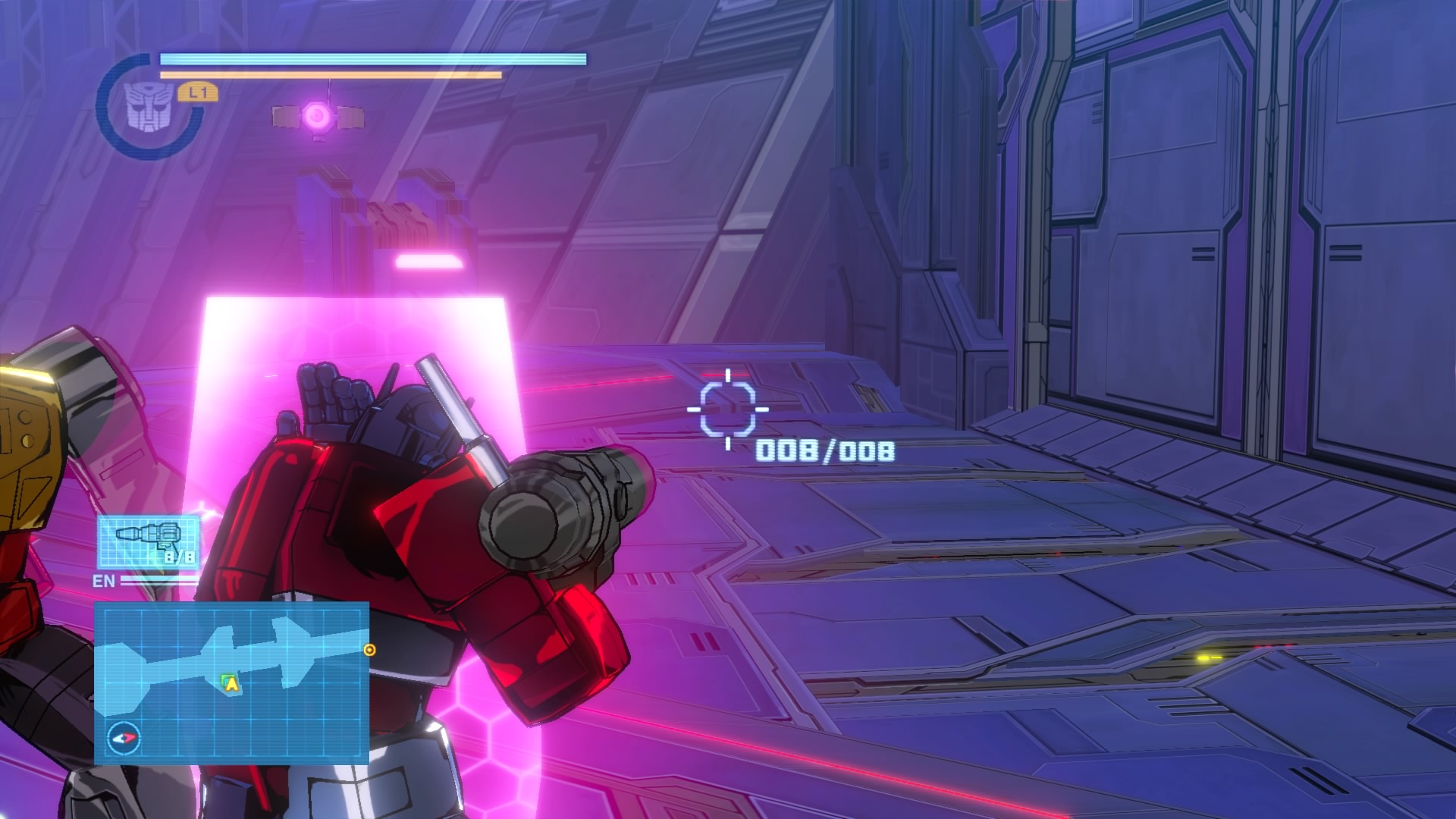 The collectibles are fine, and some of the unlockable art is fun. (There is an intriguing Jazz concept among other things.) 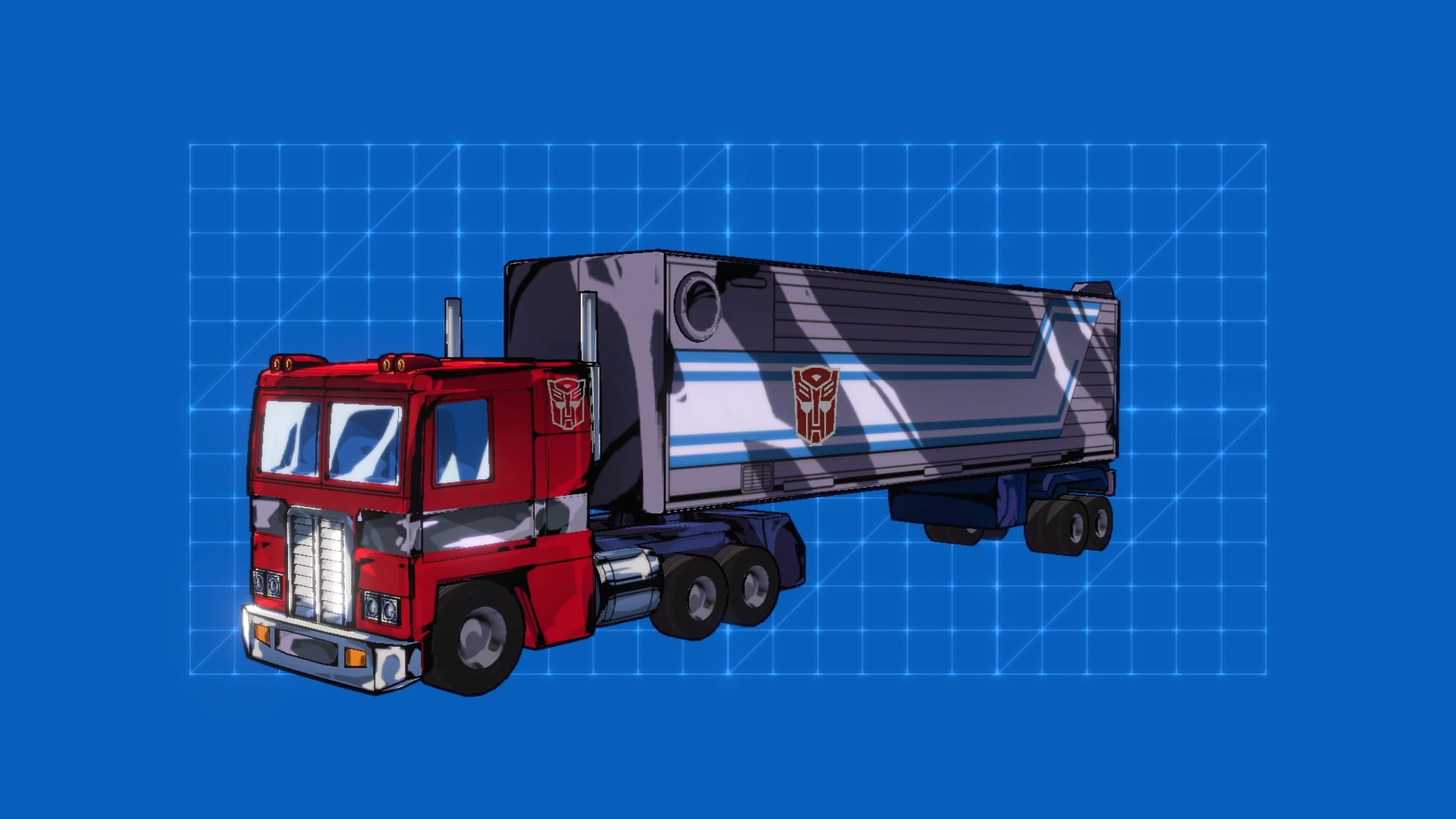 The challenge missions and side missions, however, can be very fun in 'Super Smash Bros.' kind of way. The weapons are the real collectibles. 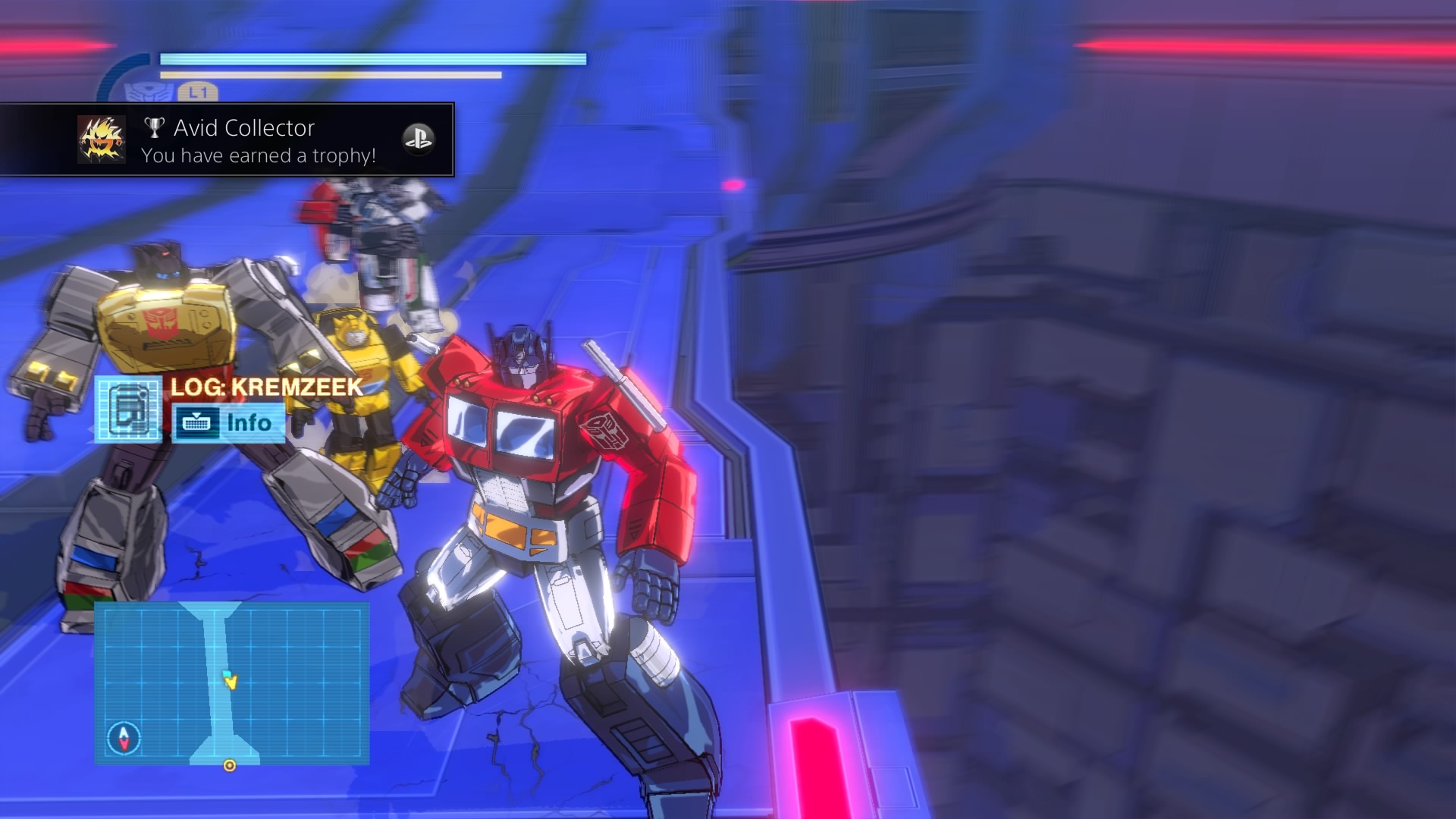 I'd have to go back to the PS2 days to find a 'Transformers' game that was as faithful and fun as 'Transformers: Devastation,' and I think 'Devastation' has the edge in both categories. 'Devastation' is a wonderful counter-point to both the checklist openworld games and the endless parade of indies that are flooding the consoles. Not since I first watched the 20th Anniversary Movie DVD has my Transformers nostalgia been so engaged. The game is a must for fans.