The Game Itself
3.5 Stars
The Video: Sizing Up the Picture
3 Stars
The Audio: Rating the Sound
3 Stars
Replay Factor
4 Stars
Bottom Line
Recommended

Harmonix began both the 'Guitar Hero' and 'Rock Band' franchises in the mid-2000s, which followed the Japanese 'Guitar Freaks' series. Both of the American franchises were wildly popular and led to so many sequels, spin-offs, and expansions that the gaming public eventually grew weary and the genre collapsed under its own weight. Until now there hadn’t been a full 'Rock Band' release for five years, but Harmonix has survived with their 'Dance Central' franchise and games like 'Disney’s Fantasia'.

With 'Rock Band 4,' Harmonix is flying without the backing of EA, and instead has Mad Catz for a publisher. 'Rock Band 4' is the series' debut on PS4 and Xbox One, and coming with it is a convoluted but lengthy amalgam of compatible instruments and DLC songs from yesteryear.

In 'Rock Band 4,' as with all 'Rock Band' games, players take the role of musicians in a band with gameplay roughly analogous to instrumental karaoke (especially the vocalist). This entry drops the keyboard peripheral from 'Rock Band 3' and focuses on the core elements of lead guitar, bass guitar, vocals, and drums. Notes for each instrument flow across the screen and can vary significantly depending on the selected difficulty. Players must strike the notes or sing the words in time with the music, and points are awarded based on accuracy and note streaks.

For the guitar peripheral, 'Rock Band 4' demonstrates an incremental improvement in gameplay, not a revolutionary one. The biggest new feature is the freestyle solo, which has been modified for more freedom. It is simultaneously described as freestyle and scripted, and while that might seem contradictory, it has the qualities of both. The tempo changes frequently, as does the position of my hands on the neck of the guitar (the smaller fret buttons near the body are used often). I earned bonus points for following the script, but I wasn’t obligated to do so, and I was able to vary the frets as much as I wanted even when I did follow it.

Harmonix made a concerted effort to allow players to bring over most of their old 'Rock Band' accoutrements from over the years, including instruments and downloaded songs. While their attempt is admirable, especially given the response that 'Guitar Hero' gave in response to the same question (a resounding "nope"), the implementation is problematic. While PS4 players merely have to insert their USB dongles, I had to purchase a special adapter to use my old stuff. I tried two wireless instruments: a 'Rock Band 2' Stratocaster, and a 'Guitar Hero World Tour' guitar, both listed as compatible on Harmonix’ handy little chart. Only the Stratocaster worked, with the other not even registering. The Stratocaster’s performance has been decent but not perfect, with some calibration issues you can probably notice in our accompanying videos.

The question of the DLC is also nebulous. Yes, most of the DLC is available, but it is not easy to download, particularly if you happen to have amassed a large library over the years. All songs must be downloaded individually (or in song packs) - there is no "easy button" that just does everything. This probably has something to do with how Microsoft runs its online store, but the process is not user friendly. Also, the game has a tendency to crash when navigating the 'Rock Band' store interface. Importing of soundtracks from previous games in the series is not yet available, but Harmonix is optimistic about it.

The campaign mode followed the antics of my band from our humble garage beginnings to international stardom. Along the way I made choices about our fans, vehicles, setlists, and of course fashion. There are a few minor changes in gameplay, like carrying over the overcharge from song to song and the little mini-achievements that pop up whenever a player does something notable, like nailing a solo or earning five stars.

Sadly, I was very disappointed with the included tracklist. Most of the tour can only be completed with 'Rock Band 4' songs and not DLC. Especially in a party setting where my friends and I want complete control over the setlist, there is little incentive to ever play the tour. Much more content is available in Quickplay mode and that is where the most fun will be had. 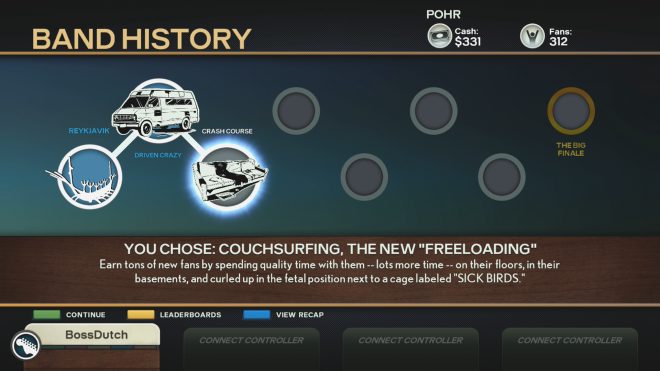 'Rock Band 4' is not a graphics powerhouse, but it does run without too many problems. As mentioned, there is a calibration issue that I cannot work out, but as I have used this TV successfully with many rhythm games over the years, I have a sneaking suspicion that the fault lies in the legacy adapter. Perhaps the new instruments fare better. 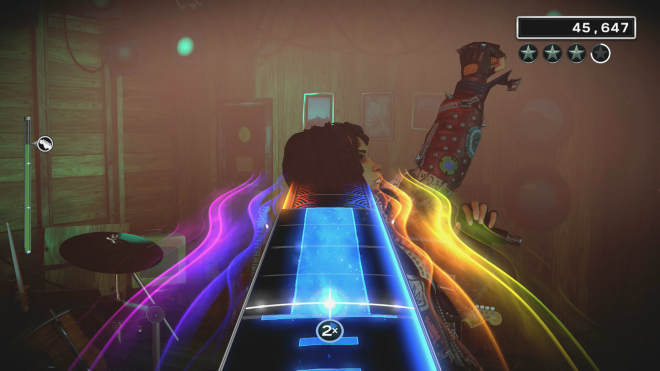 With the exception of spin-offs like 'Lego Rock Band', this is one of the weaker soundtracks in the series canon. There are some famous bands on the billing, but their accompanying songs are often obscure. Others are overplayed 90s pop-rock that favor radio-readiness over musical or technical quality. Over half the soundtrack was recorded in the last couple of years - the classics are decidedly less represented. There are a few surprises, but in general I played much more of my old DLC than I did the soundtrack.

'Rock Band 4' did not ship with an online multiplayer component, as that was apparently a feature used only by a small percentage of players. The core gameplay is as captivating as ever, even as weathered as it is. Playing in the living room with friends is the way to go, and just like old times, it will take many hours to get bored. 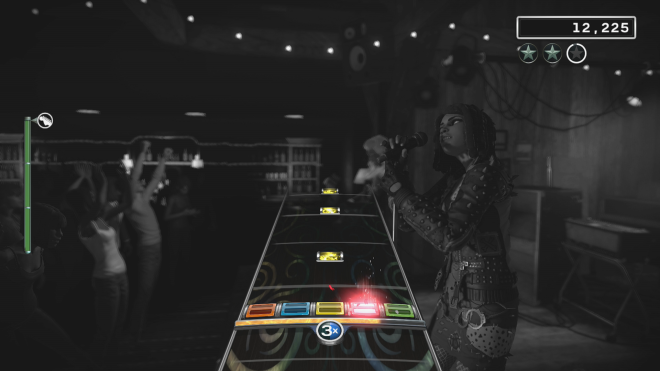 'Rock Band 4' feels more like digital-only game instead of a full release. I fully agree with Harmonix’ decision to make it a singular platform going forward, one that will be constantly updated with features and songs, instead of dumping a fully-priced release on consumers every fall. It is nostalgic and enjoyable, but not the great leap forward in rhythm gaming that we were hoping for.