Nearly four years ago, a small studio called Stoic started a campaign on Kickstarter. Made up of former BioWare employees, the project was successfully funded, and 'The Banner Saga' was released for PC and mobile in January 2014. PS4 and Xbox One versions are now available, with a Vita release also being planned. Stoic has announced the second part of the series will release sometime in the first quarter of this year.

Instead of typical fantasy tropes like elves and such, 'The Banner Saga' taps into Norse/Viking mythology for inspiration. Only two supernatural races join the humans: horned giants called varl, and a stone people called the dredge. Dredge are the villains, having engaged in war periodically against the varl throughout the ages. They recently initiated an invasion of human and varl lands, an act which the two races were not prepared for. To make matters worse, the gods are all dead or missing, and the sun has stopped moving across the sky.

The player is tossed into this calamity with two concurrent narratives. One follows Hakon, a reluctant varl leader escorting a human noble to the varl homeland. The other is Rook, a ranger whose forest hamlet is set upon by a dredge raiding party. The two heroes start at opposite ends of the world map, but slowly head towards each other as the dredge slither in from all directions. Each act changes the game’s perspective, and the parties have separate warriors and resources.

Battles are turn-based, with each fighter taking up a square on the grid. The big creatures, like varl and some dredge, take up more squares and can be attacked by more opponents simultaneously. Despite the higher profile, their bulk lets them act as excellent defenders, shielding their weaker human allies from heavy attacks. The combat is similar to those found in other tactical games, but there were a few things I had to get used to. The most important is turn order, which isn’t based on speed or initiative but simply alternates between a good guy and bad guy. This gives an advantage to the smaller team and keeps the fights exciting for their entire duration, because even a decimated enemy force is still taking as many turns. The health system is separated into armor and strength. Armor protects the wearer from damage as you might suspect, but it can be successfully bypassed if the attacker has enough raw power. Strength dictates both hit points and attack power - as a combatant takes more wounds, he also becomes less effective at inflicting damage. The only real downside is that characters are relatively static - leveling up is a dry, brief affair, classes don't have much variety, and most heroes only have 1 ability.

Even though lost battles don’t usually lead to game overs, these mechanics make for very challenging fights. 'The Banner Saga' also has a tendency to stack battles on top of each other. I would have a very close battle with several fighters being knocked out or horribly injured, and then another squad of fresh enemies would appear on screen. I came to accept the losses as part of gameplay, and adapted my squad and tactics as best I could to make them less hurtful. 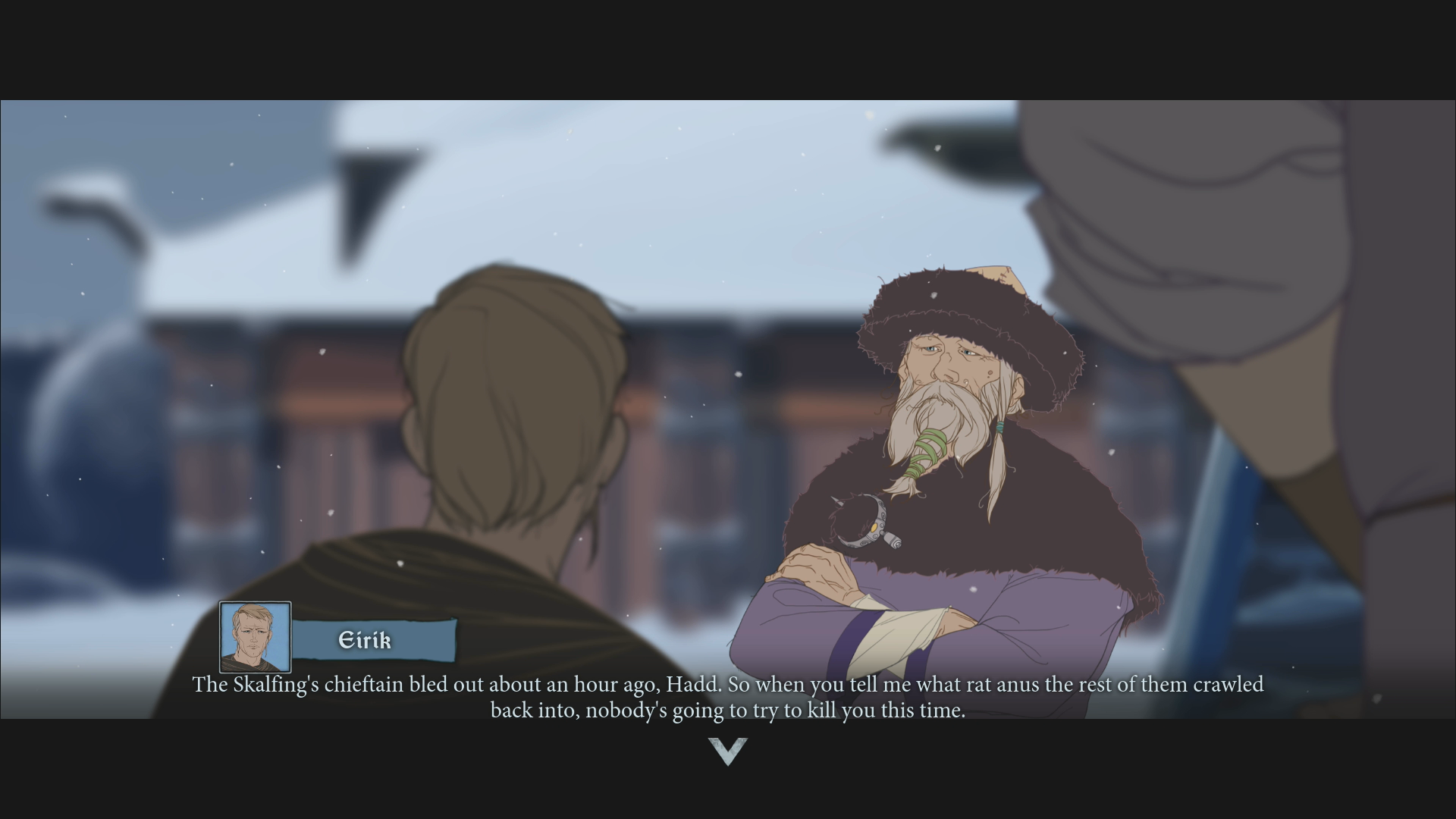 There are many tough choices to be made outside of battle as well. Each party is constantly moving with a caravan of people, which eats up valuable supplies every day. Resting in between fights is good for healing wounds and shoring up morale, but it also reduces those supplies. More supplies can be purchased at stores, but it uses the same currency that levels up the heroes. The story can kill off heroes too, unless you pick the right choice during the conversations. 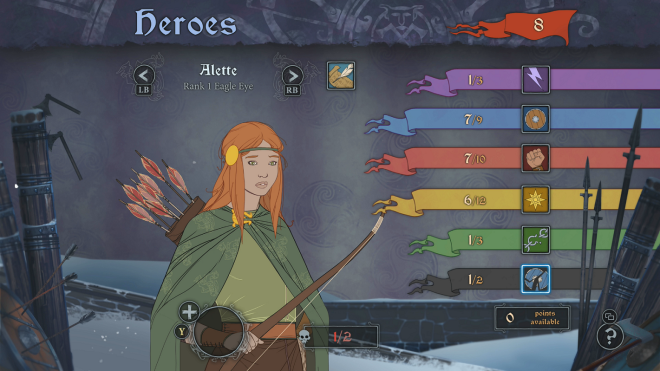 The art design is based on classic hand-drawn animation reminiscent of such classics like Disney’s 'The Sleeping Beauty'. In short, it’s gorgeous and nostalgic. Character models and movement are smooth and graceful, and colors are sharp and rich. It’s not just the cinematics, either - even the battles are done in this style. The overland backgrounds use a slightly different technique that allows for more detail and lighting. 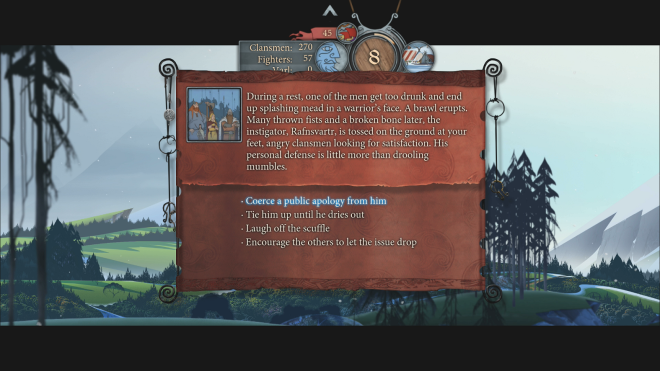 The score was composed by Austin Wintory ('Journey', Beatbuddy: Tale of the Guardians') and performed by the Dallas Wind Symphony. It is one of the best soundtracks I’ve heard in a spell, from any medium. The voice acting is sparse, only heard during a few cutscenes, but also high quality.

This is really the only area that 'The Banner Saga' is weak in, because it’s not meant to be played over and over. It has a decent length without dragging on, a story that can change depending on player choices, and a hard difficulty level. That’s really all it needs. 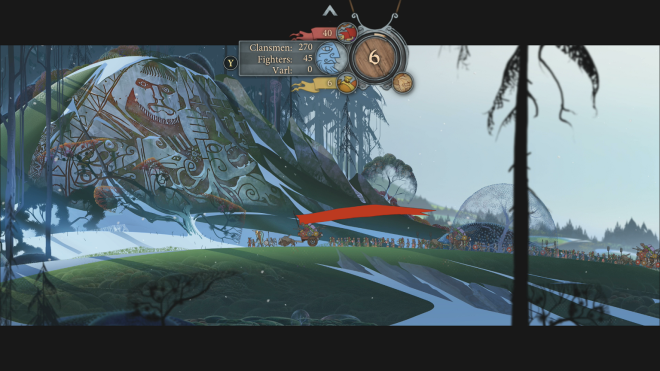 It has been a few years in the making, but the Xbox version of 'The Banner Saga' is a wonderful experience. I sincerely hope that Stoic releases the sequel on this platform as well, because they have a good thing going here and the more people who experience it, the better.