This War of Mine: The Little Ones

Last year we reviewed the PC version of 'This War of Mine', which was splendid in a depressing, too-real kind of way. Instead of glamorizing war as most video games tend to, it offers the rare portrayal of civilians caught in a city under siege. No goods or people are going in or out, and so the unfortunate souls who have been left behind must beg, borrow, and steal for their survival, and sometimes worse. It is based on the Siege of Sarajevo, a horrible event in human history that happened barely twenty years ago. 'This War of Mine: The Little Ones' is the first console release for the title, available for PS4 and Xbox One. It adds several features from the 2.0 update, and most importantly, child characters.

'This War of Mine' is a survival game tempered with bits of roguelike. Every level consists of a day and a night in roughly equal measure. During the day, all of the survivors are available to craft things and upgrade the base. They also take care of one another - a kind word, moral support, and even feeding and bandaging other survivors when they become too depressed to do it themselves. At night, a lone survivor goes out into the wasteland of the city and scavenges or trades whatever they can carry, avoiding rebels and soldiers alike. The war is a burden on even the hardiest people. In times of desperation, I could steal from and even murder civilians, but it took a heavy toll on the mental well-being of my house. Sometimes the survivors cannot get past the things they’ve done, and they break down. At this point they can lash out at their peers in frustration, leave the house permanently (sometimes with a hefty cache of supplies) or even commit suicide. 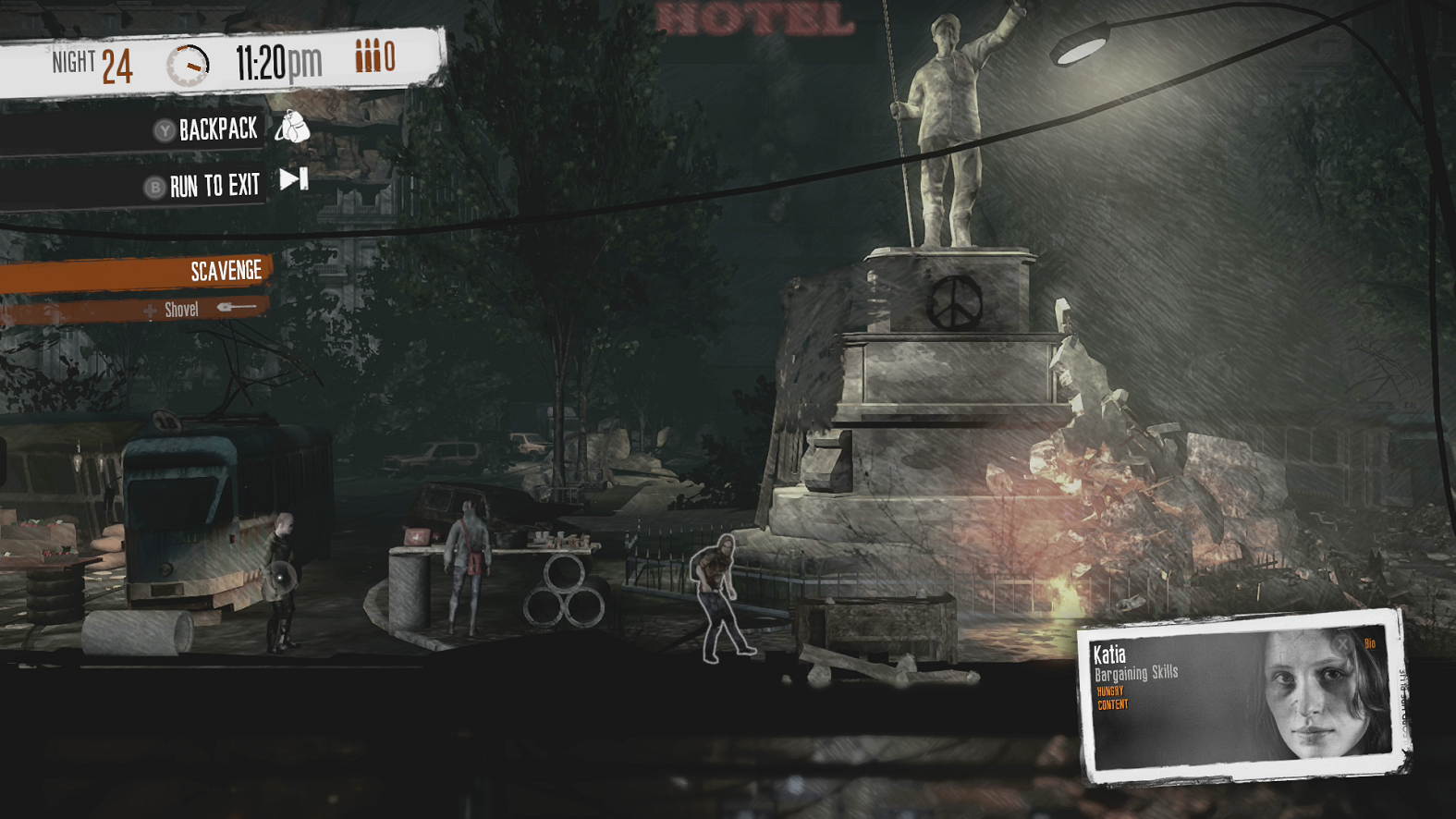 During the scavenging segments, combat, stealth, and trade are all viable tactics. The stealth mechanics are competent and easy to learn. All actions cause circles of noise of varying size to emanate from the character and advertise their presence to hostiles. Make too much noise, and the bad guys (or not bad guys - sometimes, I was the bad guy) come to investigate. Hiding in closets and in the shadows is possible, as are stealth kills if the proper equipment is available. Some characters are better at sneaking around and killing people than others. Every character has a trait that helps them survive. Zlata is a talented musician and can raise the spirits of others with a guitar. Bruno is a professional cook and can prepare meals more cheaply. Irina is a gardener, and so on. Learning how to use the traits of the survivors to make the experience less bumpy is crucial, because this is a difficult experience. The early game is particularly taxing because the household has no economic infrastructure yet. That is, no way to craft alcohol, cigarettes, or medical supplies, which serve as the currency of war-torn Pogoren.

This version of 'This War of Mine' adds the custom play system first released on the PC version in December of last year. I was able to set up my own household with four survivors of my choice, and even create a character from thin air. These custom characters can use unique skills that other characters do not have access to, such as psychiatry (which admittedly is similar to Zlata’s spirit-bolstering powers). New adult characters also bring over fresh skills, so each playthrough is different. Winter can come at different times in the playthrough, the time can be extended, and I could even go into the map and change variables for the scavenge locations. This let me experience scenarios that would otherwise be random and perhaps difficult to observe, such as a rape attempt in the supermarket that I could try to stop or simply ignore and use the distraction to scavenge. 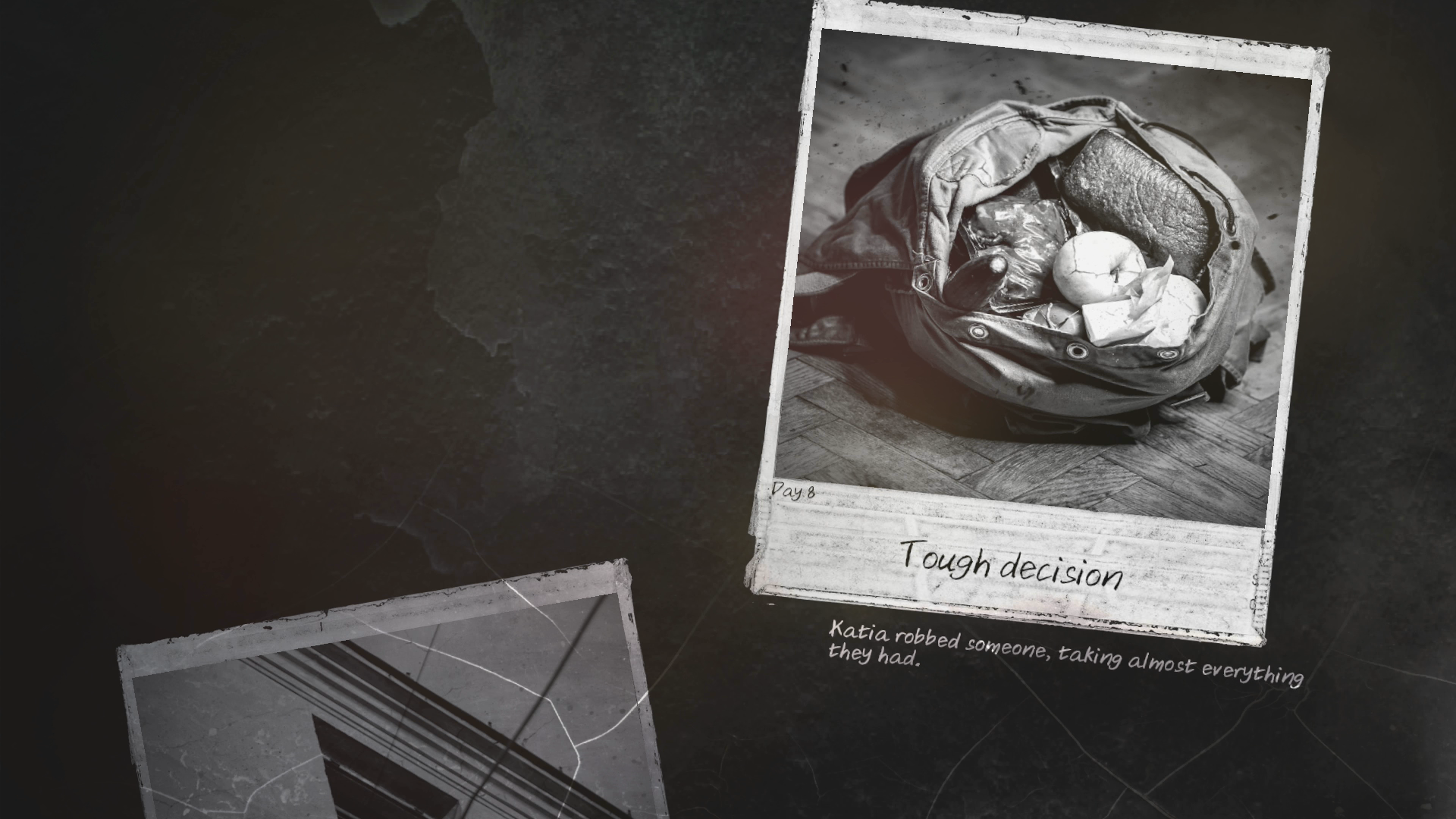 Finally, 'This War of Mine: The Little Ones' includes child characters. Of course there are kids suffering all over the world every day, but to think of them having to be involved in war of any capacity is inconceivably dreadful. In the game they are in the 8- to 10-year-old range and are not permitted to engage in any dangerous activities, like scavenging or guarding the house. Even with the fighting raging all around them and the constant shelling and shooting outside the house, they do their best to just be kids. They want to play, they want to help, and they want to understand why all of this is happening. They run up to the door in uncontainable excitement every morning when my scavenger returns. They plead to be taken along on the next scavenging run. They decorate the house with doodles made with chalk they found who knows where, one of the few instances of color in this otherwise grayscale game. In short, they are excellently written characters. Their inclusion changed my gameplay dramatically. I used to play conservatively and let my characters starve a bit to preserve supplies, and run at the first sign of danger to avoid costly wounds. With the children now depending on my survival, I took more risks and exposed my adults to dangerous situations to accumulate more food and supplies. It’s not without its perils, but I like to think that this is how most decent adults would behave if they found themselves in this appalling situation in real life. 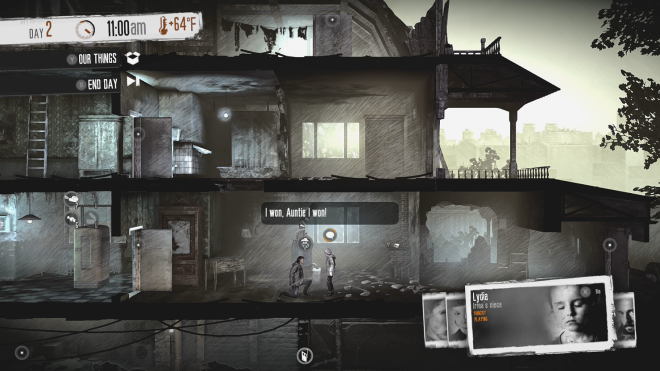 The video looks native on the Xbox One in that there is no stretching or distortion. Otherwise it is unchanged from the PC version. The visuals are not outstanding, but they are bleak and effective. A penciled charcoal effect covers most surfaces. Characters have adequate models and animations, particularly the kids, who do many things the adults do not (play on swings, kick around a ball, etc.). This version does have some control issues that the mouse-and-keyboard edition does not. Only one character can be controlled at a time, reducing the house’s crafting capabilities for the day. The 2D nature of the maps is problematic for the Xbox controller, and so my survivors often ran up and down the same flight of stairs several times until the analog stick was pulled in the opposite direction, which isn’t intuitive. It takes some getting used to, but it’s not smooth from the get-go. 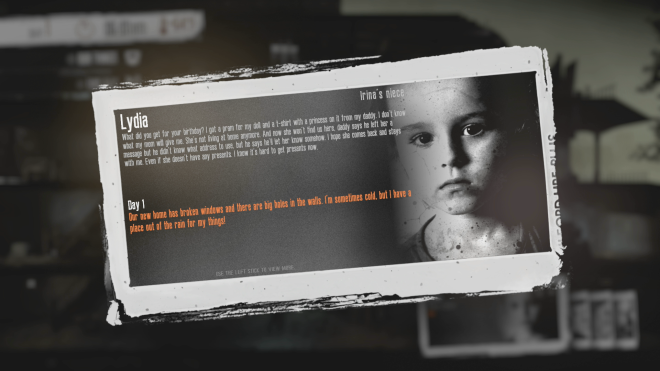 Not much news on the audio side. The kids occasionally cry out for their caretaker, but voice acting is minimal. The music is good, but similarly limited.

The newly arrived game mechanics mentioned above greatly increase 'This War of Mine's replay value. Survivor rosters in the vanilla side can be unlocked with successful playthroughs, or you can make up your own roster (kids included, for an extra challenge). The mod support from the PC side is unavailable at this time. 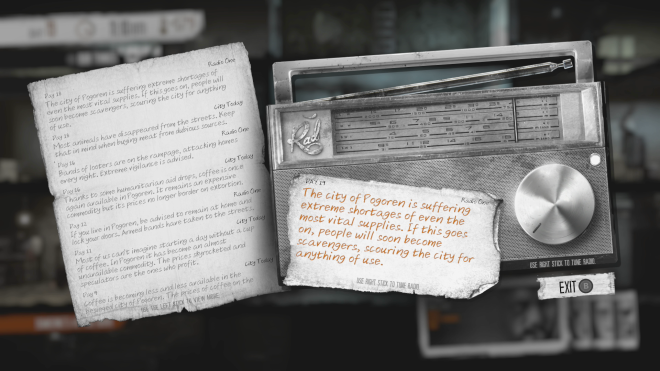 11 bit has made an even more compelling war drama with 'This War of Mine: The Little Ones'. The controller is a bit rusty, but don’t let that stop you from experiencing one of the most compelling stories in this generation. Coming to the Xbox One 'This War of Mine' is more accessible than ever, and the addition of kids makes it even more bittersweet.