The Game Itself
3.5 Stars
The Video: Sizing Up the Picture
4 Stars
The Audio: Rating the Sound
4.5 Stars
Replay Factor
3.5 Stars
Bottom Line
Worth a Look

Shantae and the Pirate's Curse

While WayForward Technologies have worked on a number of high profile gaming series such as 'Contra' and 'Double Dragon,' they are most synonymous with their own 'Shantae' series. 'Shantae and the Pirate's Curse,' the third installment in their beloved platforming series that stars a belly dancing half-genie, was originally released on Nintendo 3DS and Wii U in late 2014. Now over a year later, it has been ported to PlayStation 4.

'Shantae: Risky's Revenge' ended with Shantae losing all of her magic abilities. Considering that was the entire crux of the gameplay last time around, it gave WayForward a lot of ways to tackle a sequel. Thankfully, they didn't go the route of slowly getting her same old powers back, and instead a series of events causes Shantae to team up with her former nemesis, Risky Boots. Now the half-genie is going on an island-hopping adventure using a whole new bag of tricks, all of which that came from Risky. 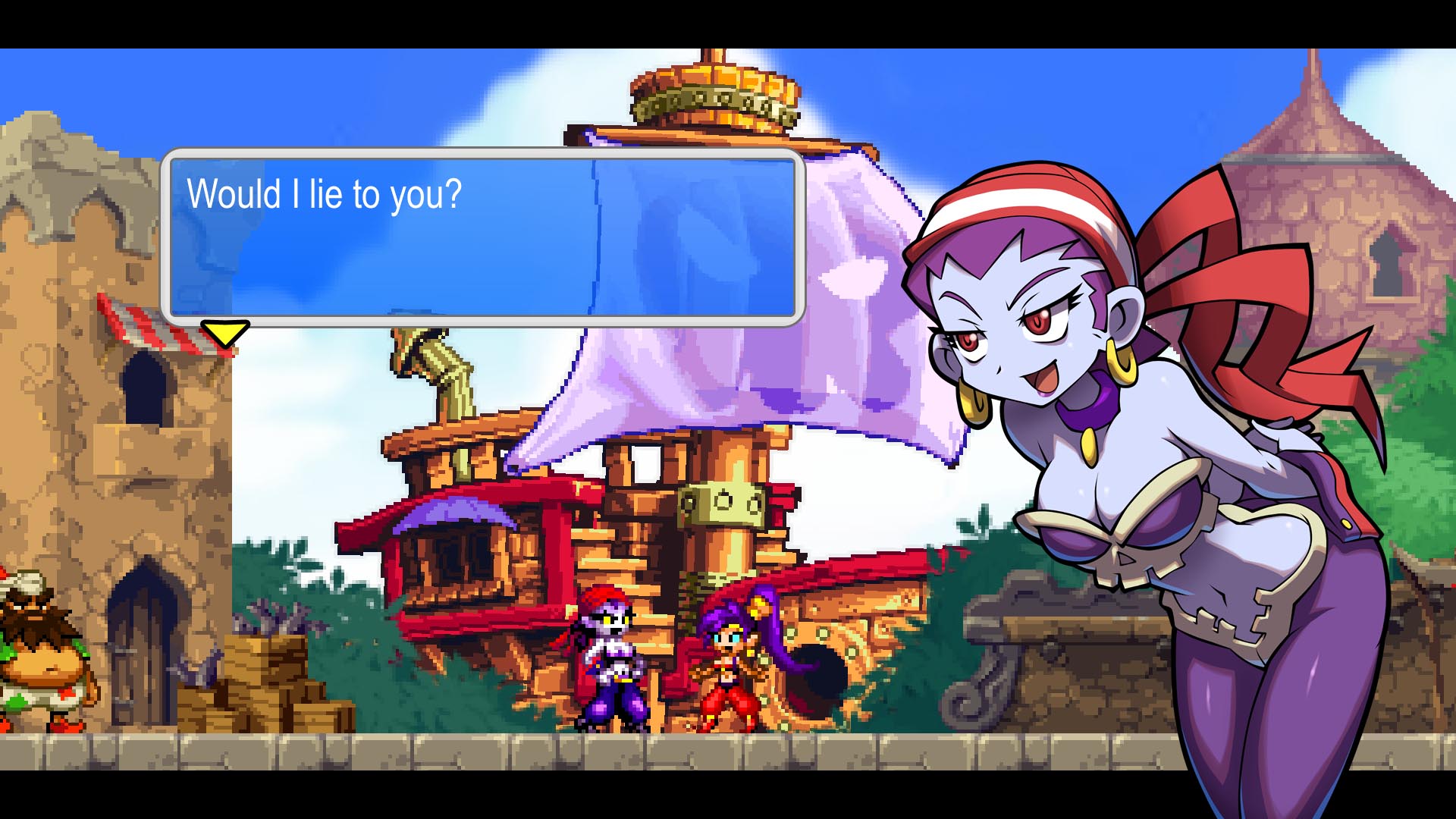 Overall, the game is still largely the same platformer the series has always been. The player is generally tasked with solving a puzzle on each island, while trying to combat their way through a bunch of enemies, before being granted access to its dungeon. These puzzles are often a simple task of bringing an item from point A to B, and talking to the right village folk that populate non-violent areas. I found myself stuck a few times, unsure what to do to progress the story, but after a few conversations I was generally pointed in the right direction.

The dungeons are definitely where the game shines, and it takes a 'Zelda' approach to them. Players will have to find keys in order to unlock doors, and will eventually find an item that will give the game's heroine a brand new skill. Shantae will use Risky's hat to glide in the air, and use her boots to dash across crumbling floors. It's fun getting to see Shantae essentially use her villain's abilities to her advantage.

This new ability then opens up new possibilities within the dungeon itself. I found myself able to access areas that were previously inaccessible, and then make my way to the boss fight that serves as a fitting end for each area. The game's boss fights are the most memorable parts of the game, and end up being difficult, yet not overly daunting. Each boss has an attack pattern that needs to be figured out, and typically the item I just found in the dungeon ended up being the key to victory within the fight. 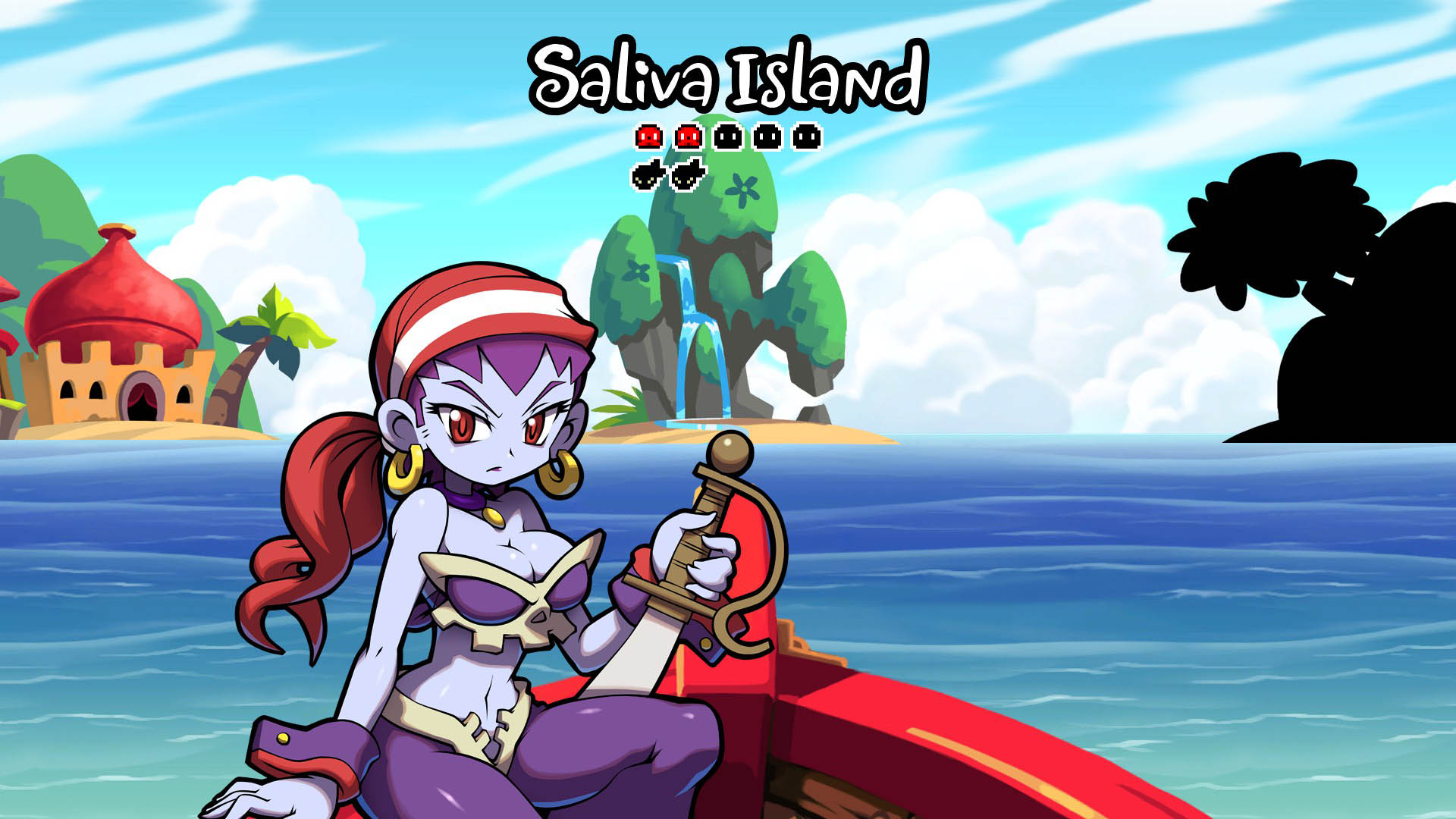 I did have trouble with a few boss fights, though, and I took that time to explore previously visited islands with my new abilities. Not only can you find collectibles that boost Shantae's health, but backtracking for collectibles also means accruing a hefty sum of money. This money can then be used to purchase potions to refill health once when at the point of death, and this turned out to make all the difference for the boss fights that I had previously thwarted me.

These auto-potions are extremely handy since there's no auto-save in 'Shantae and the Pirate's Curse.' It only took me one time of losing 30 minutes of progress to a death for me to stock up on those potions and save often. It's a rather dated mechanic to force players to save in designated areas, and it almost feels like it was kept in the game since previous entries worked that way. I never felt like the game was more challenging due to no auto-save, just annoyed that I had to retrace my steps.

While the game is generally challenging but not brutally difficult, this all changes in the game's final area. Much like in 'Guacamelee' there is a huge difficulty spike right near the end where the game expects players to execute pinpoint platforming while also using every skill they have at their disposal. It was the only part of the game that felt more frustrating than fun, and it ultimately left a sour taste in my mouth. By the end I wasn't thrilled to have accomplished my goal, I was just relieved it was over. 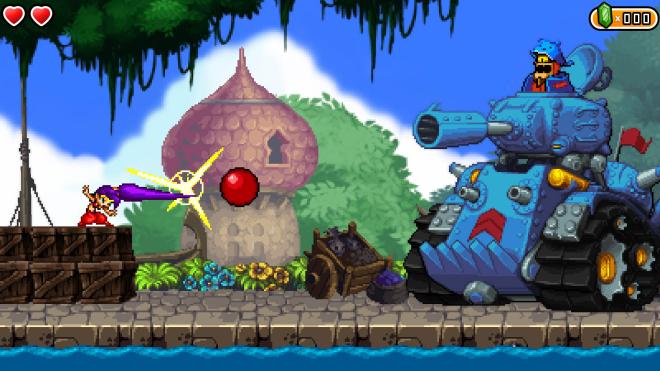 Unlike 'Shantae: Risky's Revenge - Director's Cut,' WayForward designed 'Pirate's Curse' for HD systems from the very beginning. That's why you won't see any borders surrounding the action, and the pixelwork looks gorgeously drawn instead of blown up. The animation in particular is gorgeous to see, as the characters bounce around with every step. 'Mega Man 9' developer Inti Creates even contributed to the game by producing beautiful portraits for characters during dialogue sequences.

There's also a lot of small touches that make the world seem like its alive. Scuttle Town, the game's hub area, constant changed as I progressed through 'Shantae's story. After getting wrecked in the very beginning, players get to see it slowly rebuild again. If there's one disappointment, it's that there are a lot of re-used enemies and characters. While they may get a nostalgia pop initially, I was ultimately left wishing that there were more new visuals left to see. 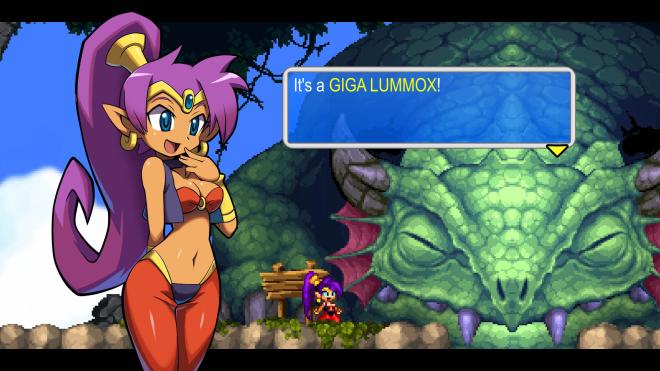 'Shantae' features a fantastic soundtrack by Jake "virt" Kaufman. There's over 2 hours of music, and it makes for a perfect accompaniment to Shantae's journey. Since her adventure goes to several highly different locales, Kaufman's soundtrack is able to experiment more. Each theme for an area creates an atmosphere for it, and I found the music constantly stuck in my head after I stopped playing.

The sound design is also well done, although it's a bit disappointing that the voiced dialogue is extremely limited. While it made sense that not every conversation could be voiced on Nintendo 3DS, there's really no reason why the console version should also be limited. If there's one upside to the lack of voice acting, it's that the music is always in the forefront, and is never relegated to just simply background noise.

Exploration is a key part of 'Shantae and the Pirate's Curse' and completionists will find themselves scouring every inch of the game's six islands. There are several different collectibles to find including Heart Squids that boost Shantae's own health, so there are practical reasons to hunt them down. Finally, you'll probably need to grind out jewels in order to purchase boosts for Shantae's skills. These will make her attacks even more powerful, and even add some evasive maneuvers, so it's a worthwhile time investment.

An alternate mode also unlocks after players finish the game called Pirate Mode. This variant allows players to start with a fully powered Shantae straight from the beginning, and is built for speedrunning the game. I really had no desire to find all of the hidden collectibles again after playing, but it's a nice touch that I'll probably use if I ever want to replay the game again. 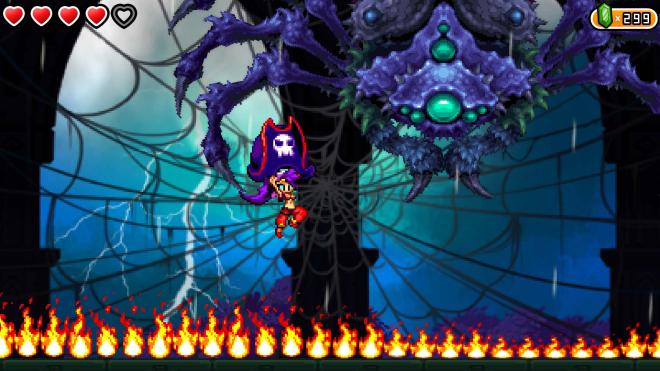 'Shantae and the Pirate's Curse' is a highly enjoyable platformer that doesn't take any risks. It's almost like comfort food in a way. You know what to expect, and it scratches that particular itch, but it's ultimately empty calories. Hopefully WayForward Technologies will take more chances and innovate with the next entry in the series, 'Shantae: Half-Genie Hero.'