Steam PC version reviewed, both with and without mods.

'Don’t Starve Together' is a standalone multiplayer spin-off of 'Don’t Starve'. It has been in Early Access since December of 2014, with its own set of updates and content. The first expansion, 'Reign of Giants', has been incorporated into it, but it doesn’t have anything from 'Shipwrecked' at this time.

Ah, 'Don’t Starve', my old ball and chain. I have been thoroughly hooked since the 'Together' early access started, frequently peer pressuring my friends to join in my starvation and then offering no sympathy when they also wound up addicted. This is much the same experience as 'Don’t Starve: Giant Edition'. My merry band of homeless misfits is dumped unceremoniously into a harsh wilderness, with no civilization in sight. Together we collect resources, cook food, build things, and comfort each other in the darkness (by fighting off the shadow monsters, nothing scandalous!). 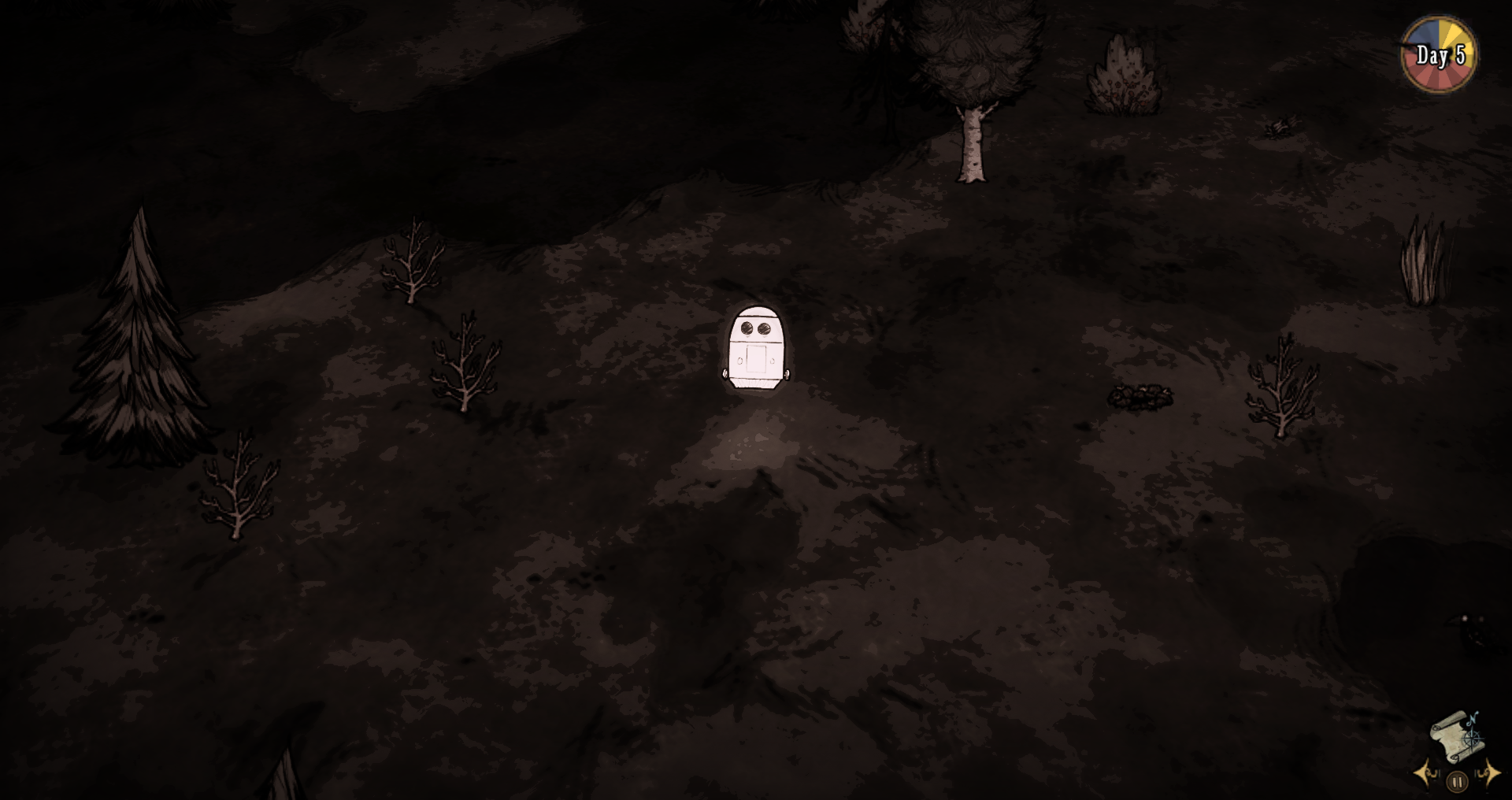 'DST' has none of the Adventure Mode content from the original game, but the suite of world settings is super comprehensive. As the server host/benevolent dictator, I carefully tweaked the spawn and refresh rates of various monsters and resources between each playthrough until we achieved just the right level of difficulty. My homies had to put up with several restarts, but once we were off and running, the world was our oyster. A deadly, toxic, horrible oyster, full of nasty creatures and brutal climates. Experiencing all four seasons is crucial to getting all of the content, so we braved the endless monsoons of spring, the deadly overheating of summer, and the frigid frigidness of winter. Autumn is peacetime (if such a thing exists in 'Don’t Starve'), so we spend it engaged in vigorous crafting to prepare ourselves for the inclement weather and the inevitable appearance of the giants. 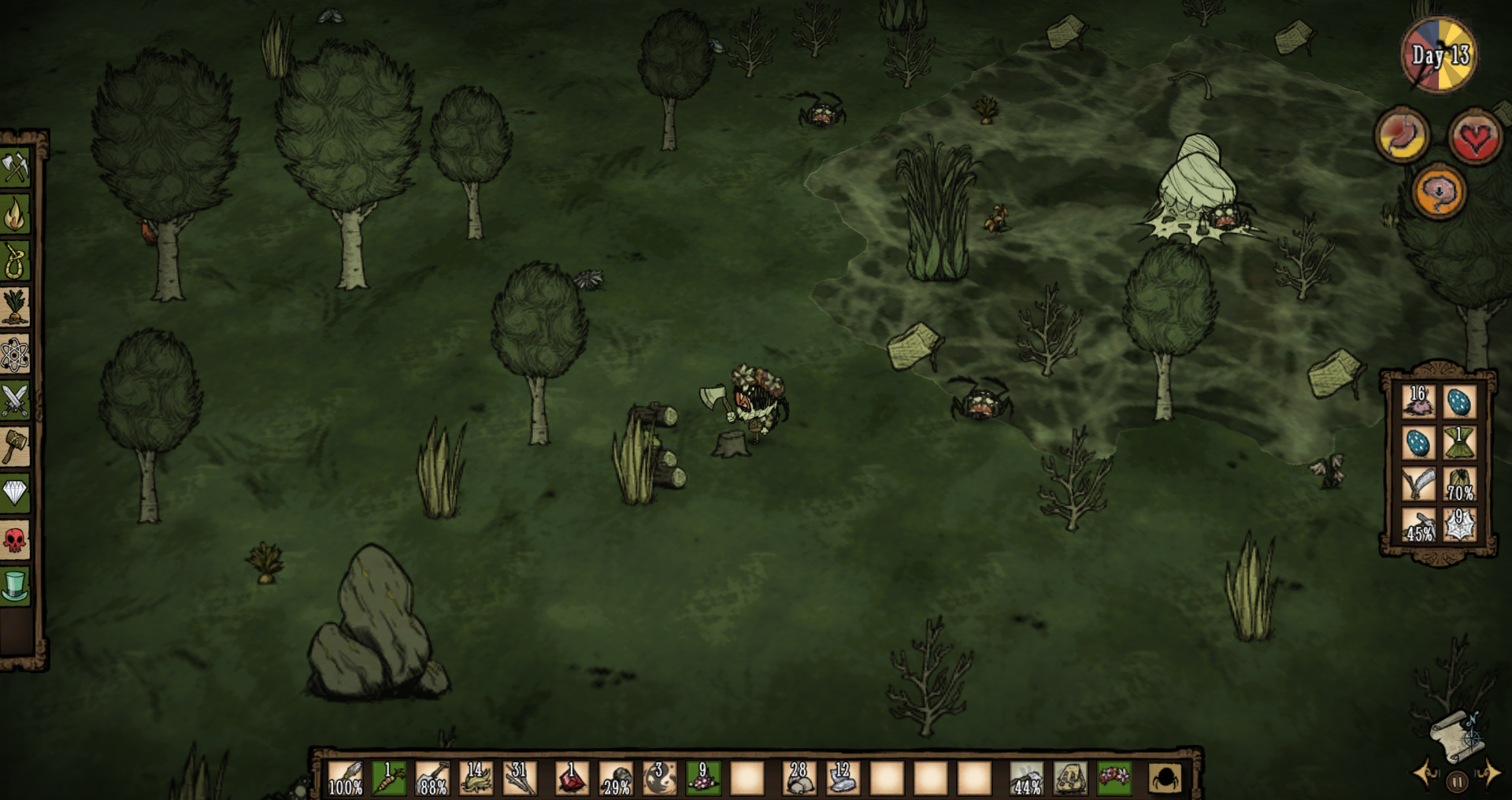 My complaints about the original have almost all been addressed in 'DST'. Giants can be toned down or removed, and having more hands on deck means that when they do spawn, we’re more prepared to defend our home (of course, most monsters have seen a health buff to make them more challenging for a team). Seasons can be shortened to nerf their impact and let us focus more on progress than just survival. Feeding a whole family of survivors can be challenging, especially in the early game, but we soon developed a sustainable, organic farm and spider mill to generate enough raw food year-round. As the camp chef I am responsible for the menu and all meals, while Alexis is our farmer/tentacle enthusiast and Andy, well...he mostly burns things down. But sometimes pyromania has its own rewards, it turns out.

Klei has been steadily increasing the amount of stuff in 'DST', most notably the addition of caves (one of the coolest parts of the original, and originally problematic for multiplayer servers) and beefalo taming. Caves especially are very time- and resource-intensive, and quickly fatal for the unprepared. They make the surface world look downright tame in comparison. However, death in 'DST' isn’t necessarily a big deal, especially on Endless mode. Players can be revived through many means, with or without a maximum health penalty (which can be counteracted with booster shots). The host can even roll back the server by several in-game days in case of a catastrophic loss. In the base game, death could mean the end of many hours of play with little to show for it, except for perhaps enough experience for an unlockable character. Here it’s a minor inconvenience, and it happens less and less as we get better at not starving. Also, all characters are unlocked from the beginning, even the elusive Wes and Maxwell. 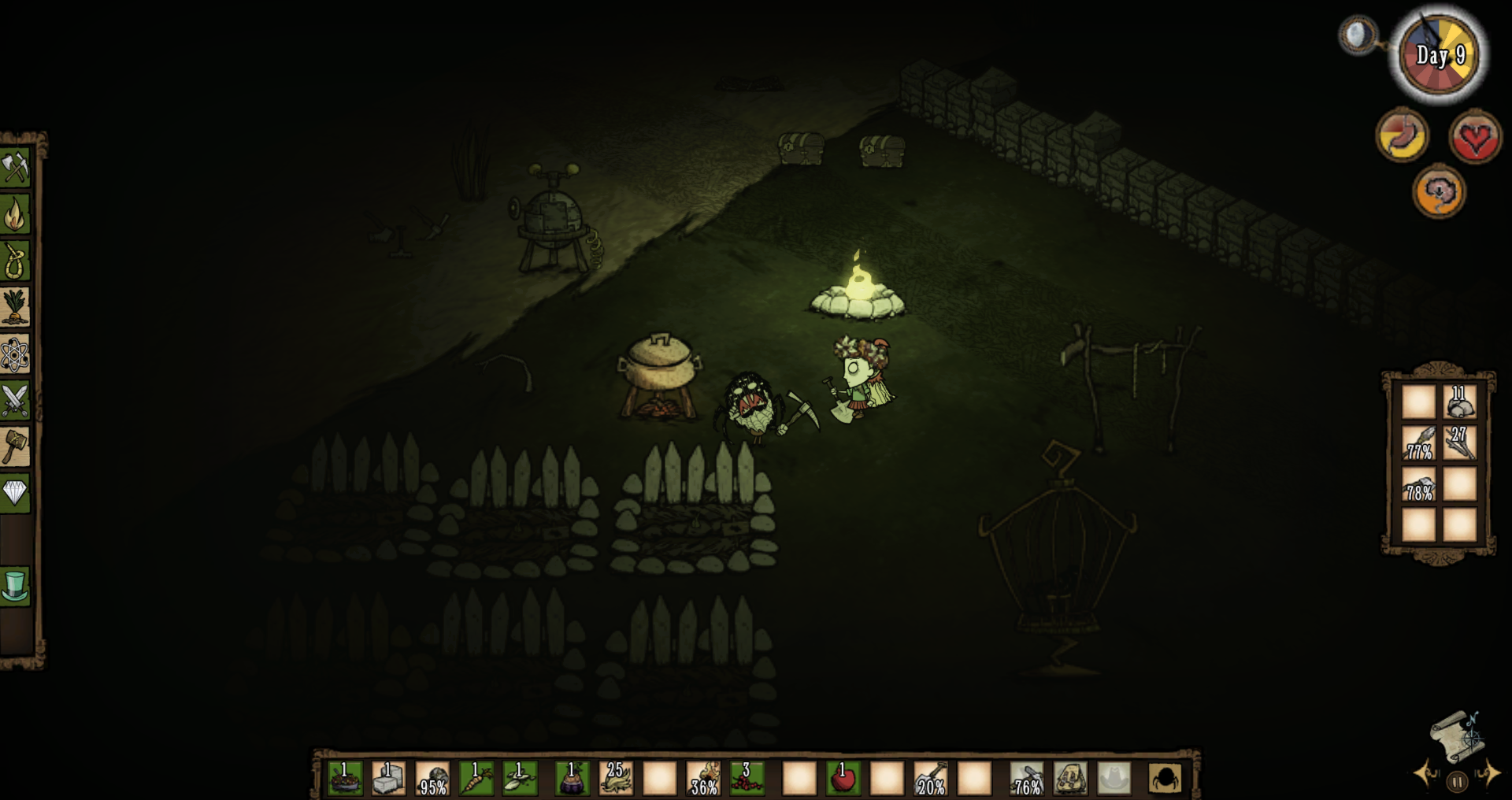 I always play on friends-only servers, and I think that is the best way to experience 'Don’t Starve Together'. Playing just about anything with friends makes it better, after all. Public servers are available and can have very different rules - some are genuinely cooperative, some are cooperative in name only, and others are full-on competitive PvP spectacles in the vein of a gothic 'Hunger Games'. Klei has been very good about player freedom this way. For cheaters or hosts who need to make changes to a server after it goes live (and world settings therefore cannot be altered), console commands can be used to accomplish nearly anything. 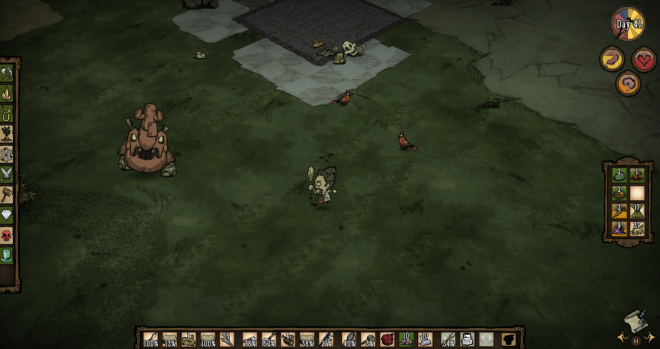 The video is mostly unchanged from 'Don’t Starve', with just a few different models for things like beefalo saddles and whatnot, and customization in the form of unlockable outfits. It is otherwise a simple but still beautiful vignette of oddball cartoons and dark clockwork. Mouse and keyboard controls are somewhat problematic because of the sketchy hitboxes (I have accidentally struck a pigman instead of picking up his poop on more than one occasion, leading to murder and regret), but controllers work just dandy. 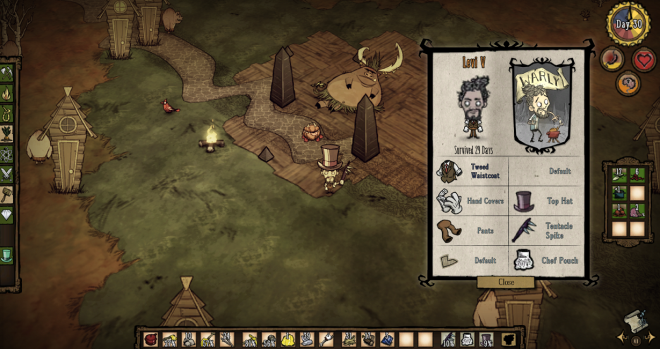 The carnival music fits in perfectly but is limited in its depth. Sound effects are quirky and lively, as are the distinct musical instruments assigned to each character. 'Don’t Starve' is not a horror game strictly speaking, but I will readily admit to being spooked whenever I hear the hounds baying - the telltale sign of a weekly attack, designed to keep players on their toes.

In addition to the massively replayable nature of a good open world survival, not to mention the extensive server and PvP variables, 'DST' has an active and talented mod community. My own server has adopted all kinds of things, from new characters and structures to custom weapons and more. 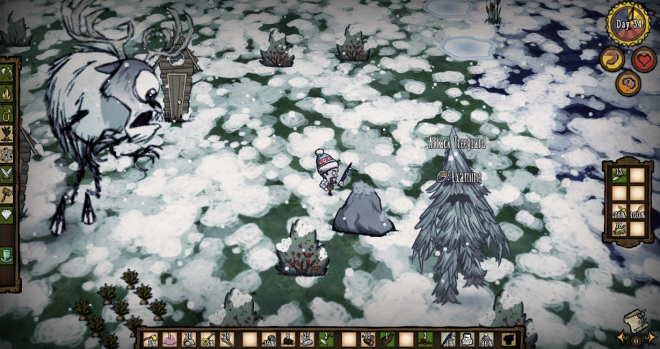 'Don't Starve Together' is hands-down the best way to play 'Don’t Starve'. There’s nothing quite like taking down a deerclops with your bros and basking in the warm glow of victory before being interrupted by a vicious werepig attack or a bout of troublesome frog rain. It’s still hard as hell in its default mode, but Klei has handed over the keys to get under the hood and fine-tune their survival experience like never before. If your gaming circle is looking for something new, why don’t you try a bit of starvation?