The Game Itself
3.5 Stars
The Video: Sizing Up the Picture
3.5 Stars
The Audio: Rating the Sound
4 Stars
Replay Factor
4 Stars
Bottom Line
Recommended

'Civilization', the granddaddy of modern turn-based strategy, was released for PC in 1991 by a man named Sid Meier. Like his seminal series, Meier would go on to become an extremely influential force in gaming for decades. 'Civ' is now in its 6th edition, with a few offshoots like 'Revolution' and 'Beyond Earth' here and there to pad out an already sizable franchise.

Imagine a historical tile board game where each player attempts world domination through nation-building. Now take it to a super complicated level of detail and polish, with so much information that it is impossible to have on an actual paper board, and you have the basis for every 'Civilization' game, and every turn-based strategy game influenced by it for the last 25 years. There are several ways to win the game, from rote conquest to the more complicated cultural and science victories, where the civilization goes to Mars and so forth. Each civilization competes for land, raw resources, religious and economic influence, and the favor of city-states, who can offer big benefits to the diplomatically inclined.

My first civilization is always Rome, and being a huge history nerd I often attempt to "roleplay" Rome as much as I can through the 'Civ' mechanics. This is possible in a simple way, by sticking to infantry forces instead of cavalry, demanding tribute from other nations and conquering them if they refuse (and razing Carthage to the ground at the first opportunity, of course), having a huge and expensive network of city infrastructure, etc. 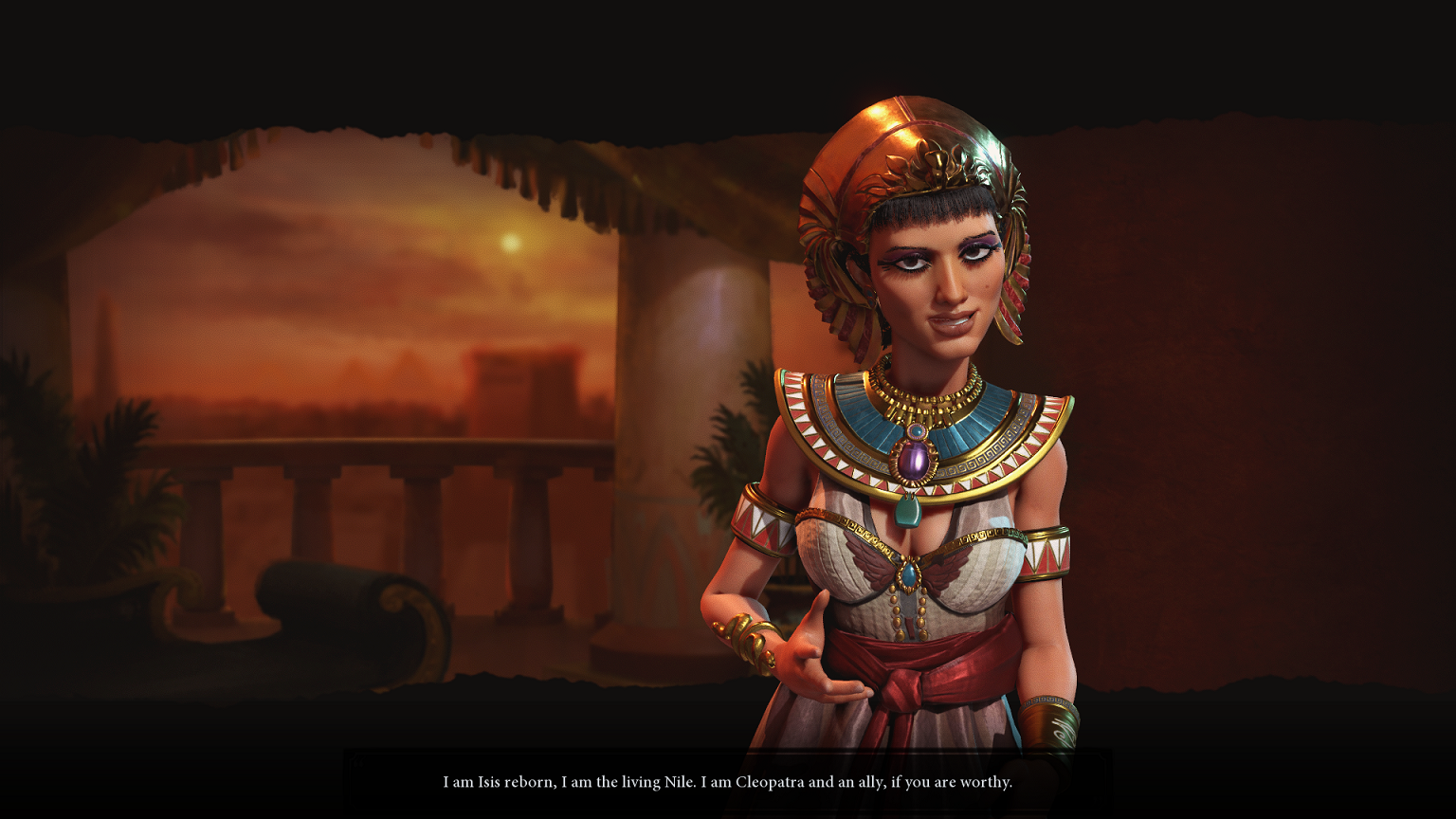 When making my first public bath, I noticed something very different in the 'Civ' formula. City buildings are no longer "floating" - they have to be deliberately placed on the grid, destroying an improvement and any resources there to make way. These are called districts and can include several different buildings on one tile. Cities in the real world often develop this way, like NYC's Wall Street, Amsterdam's Red Light District, or Paris' Montmartre, specializing in money, entertainment, and culture respectively. Each district gets bonuses based on the tile it's placed on, so urban planning is now a real thing. Instead of just plopping down a settler in the middle of a pile of resources, I have to look at the layout of the tiles themselves. Do I have enough mountains to justify a holy site? Is there a source of water for the aqueduct? Can my campus have a rainforest nearby? Governance is serious business. 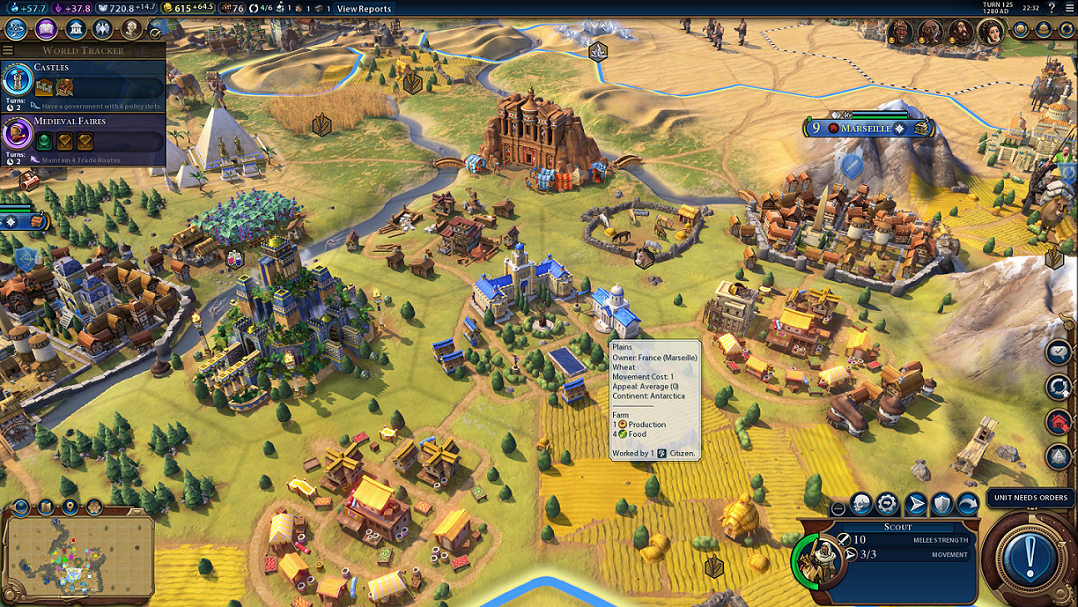 Districts are an impressive and exhausting system, but the same level of care has not been put into many of the other systems. Civics, instead of being tied into a central model of government, are now a huge assortment of dry stat boosts, devoid of any historical lore. It feels more like min-maxing than make believe nation-building. Diplomacy is again a huge letdown, and it's something that I notice with every 'Civilization' release. Despite their excellence at their craft, Firaxis struggles to make a distinct and working system of AI behavior. Enemies behave inexplicably and only within the bounds of a strange set of rules. They often ignore my country if we have a small military, although they should be either invading me or attempting to trade materials or science, because clearly all of that money is going somewhere. Their interactions are usually limited to disruptive scolding and one-sided trade requests. Also, how is it remotely possible that Gandhi's India would ever invade another state? 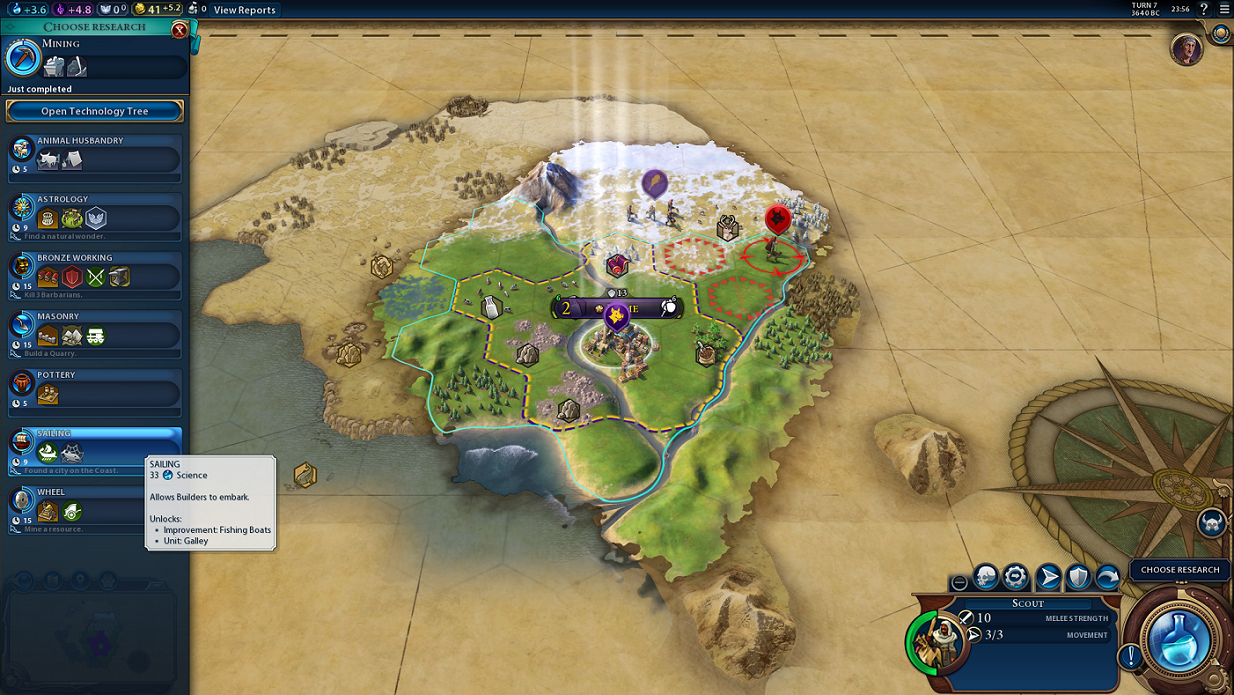 City-states have been reworked instead of overhauled. Instead of bribing them with goodies to behave, like I might with a pet, they have to be given attention through official envoys. Send enough envoys and you become their suzerain, the proverbial big brother who basically controls the state. As a suzerain I can "borrow" their military units, improve their own lands, use their roads, etc. This permits richer but less militaristic states to still have an appreciable military force when needed, kind of like the mercs in a 'Total War'. Religion has been tweaked a bit as well, but still follows the old "priest vs. priest" dynamic, where in real life religion was often spread by conquering armies and it wasn't a very pleasant process. Essentially I have to break up my progress with faith instead of incorporating it into a larger governmental initiative, whereas science is a more fluid and universal 'Civilization' concept. 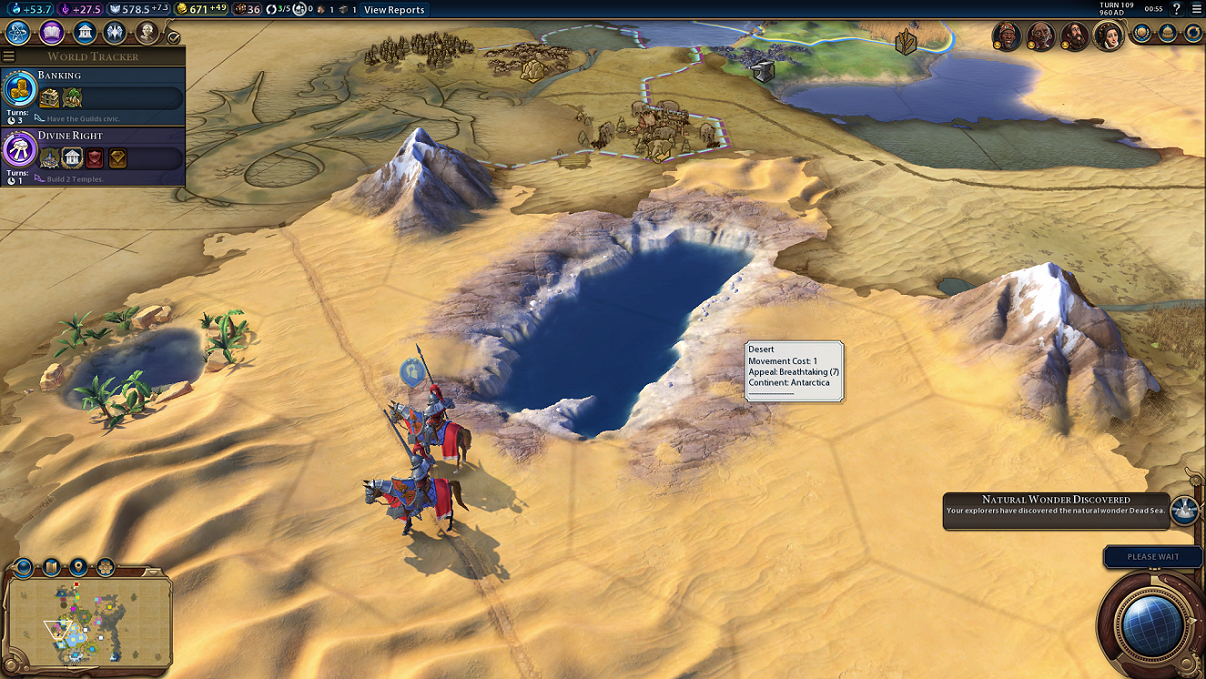 Speaking of science, Firaxis has adapted the optional mission arcs of 'Beyond Earth' into the research tree here. Countries can make breakthroughs by fulfilling certain objectives that make sense - sending enough trade routes out into the world and learning about foreign currency would probably help a people's understanding of banking, right? They permit more player freedom by letting countries that would normally stagnate in research, like Teddy Roosevelt's America, expend other resources to keep up in the tech tree, and it's all explained properly in the lore instead of handed out willy-nilly like the civics. 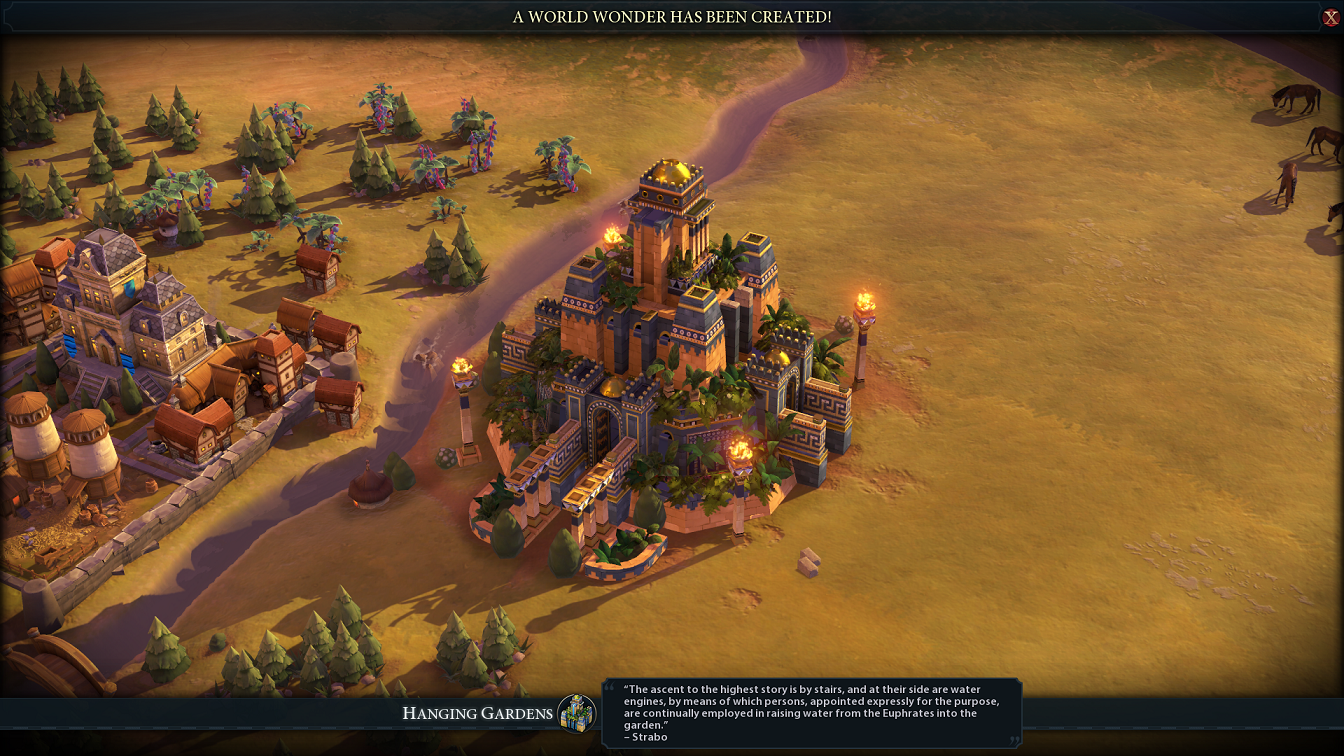 For all of the improvements and vast modifications, other systems are still not user-friendly. Military units can't join into formations together except in special circumstances, like to escort a non-combat unit (finally) or when made into a corps by expending a Great General. This makes for bulky turns where every individual unit has to be moved by hand, extra land units can't be built until the previous city slot has been vacated, etc., just like 'Civ V'. Roads are now only built when traders have moved through the area, slowing down conquest. Tooltips are cryptic equations, full of letters and numbers but strangely missing the basic stats I need, forcing me to go under the hood into a mountain of minutiae. My ladies-in-waiting are huge fonts of intelligence, but there apparently isn't a better way to present the info other than quickly fading notifications during other players' turns. Builders are now expendable resources instead of persistent units, a development none of my in-game tutorial advisors thought to mention to me (off with their heads). These complaints are individually small but they add up to an unwieldy presentation that ultimately works against the experience. 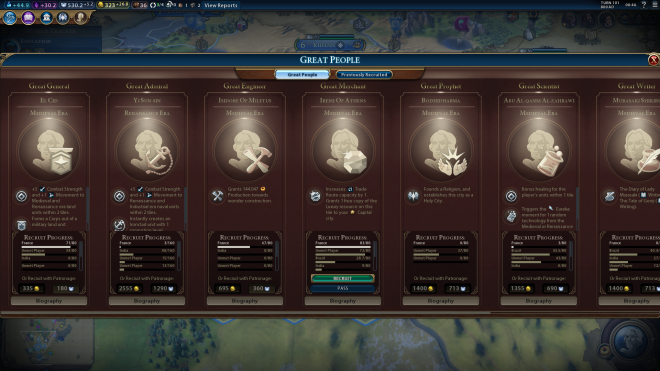 'Civ 6' takes a different approach to visuals. Previous games have emphasized style over realism in many cases, but here it has been taken to an almost 'Revolution'-level extreme, with bobblehead leaders and a glittery, tablety overmap. It's not necessarily a complaint, more of an observation. The districts for their part have been well-developed, and make each city look more like a planned urban ecosystem than a blotchy layer of farms and mines. I do like that the boring fog of war has been replaced with a primitive explorer's map, complete with burnt edges and artistic doodles of sea dragons. 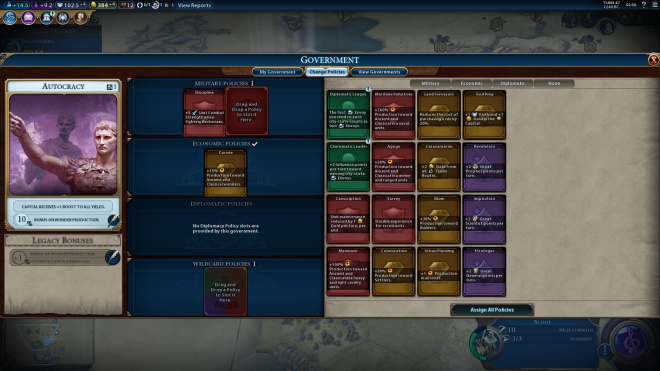 The audio is well done, especially the linguistic repertoire on display and the pleasant, lilting score during normal gameplay. Sean Bean plays the narrator to great effect, dispensing quotes in his defeated, reserved fashion.

Many of the countries are the same as in previous installments, but with only a few exceptions, there are a lot of new leaders here. Their bonuses are deep and interesting, and go a long way towards making every playthrough different. As usual, most of the starting conditions can be altered to the player's desires. There is also online multiplayer, LAN play, and a "hot seat" mode for players who like to all play on one machine. 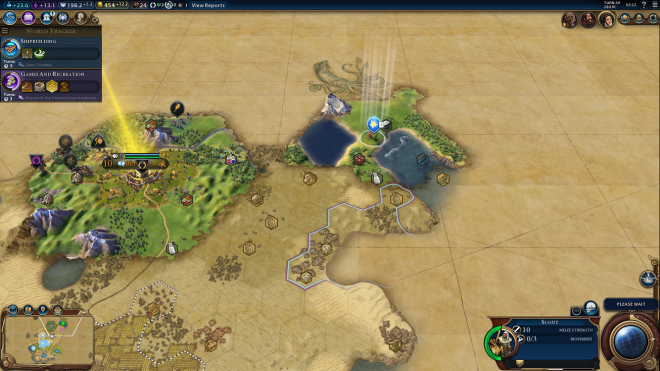 I found some problems with 'Civilization VI' but not enough to keep me from enjoying it for quite a few hours. Firaxis has improved some systems and stumbled on others, including things that should be in good shape by now, like diplomacy. I have a feeling that a year from now it will be a much better, bigger game, (not to mention cheaper) as is tradition with this series. I just wish that the inevitable DLC felt more like expansions and less like content filling in the gaps from the day one release.