The Game Itself
2 Stars
The Video: Sizing Up the Picture
1.5 Stars
The Audio: Rating the Sound
3 Stars
Replay Factor
2 Stars
Bottom Line
Skip It

Originally released in May of 2014 for PC, 'Full Mojo Rampage' has finally made its way onto consoles. The dual stick shooter, developed by Over The Top Games, has a voodoo theme and is filled with mystical imagery. Its roguelike design means the player becomes more powerful after dying, and subsequent runs are easier.

As someone who loves the randomized challenge of roguelikes and adores twin stick shooters, I've been spoiled lately with games like 'Enter the Gungeon' and 'Nuclear Throne' coming out. The latest game that attempts to capture this magic combination is Over The Top Games' 'Full Mojo Rampage,' a mystic themed shooter that has the player defeating hordes of spooky skeletons and ghosts. While I wish I could say that 'The Fancy Pants Adventures' developer's latest title deserves the same accolades as its contemporaries, it just isn't the case.

'Full Mojo Rampage's campaign is structured into four different quests, not entirely unlike 'Galak-Z: The Dimensional.' These typically task the player with beating five levels in succession, and end with a boss fight. I like this structure since it helps ease the feeling of never accomplishing something in a roguelike (since death forces players to start over completely), and players don't have to beat the whole game in a single run. These quests are generally tied together with a brief bit of exposition (such as a witch requesting a list of ingredients in order to rebuild a shrine), but it's very one-note and I was never given a good reason to care about this world or characters. 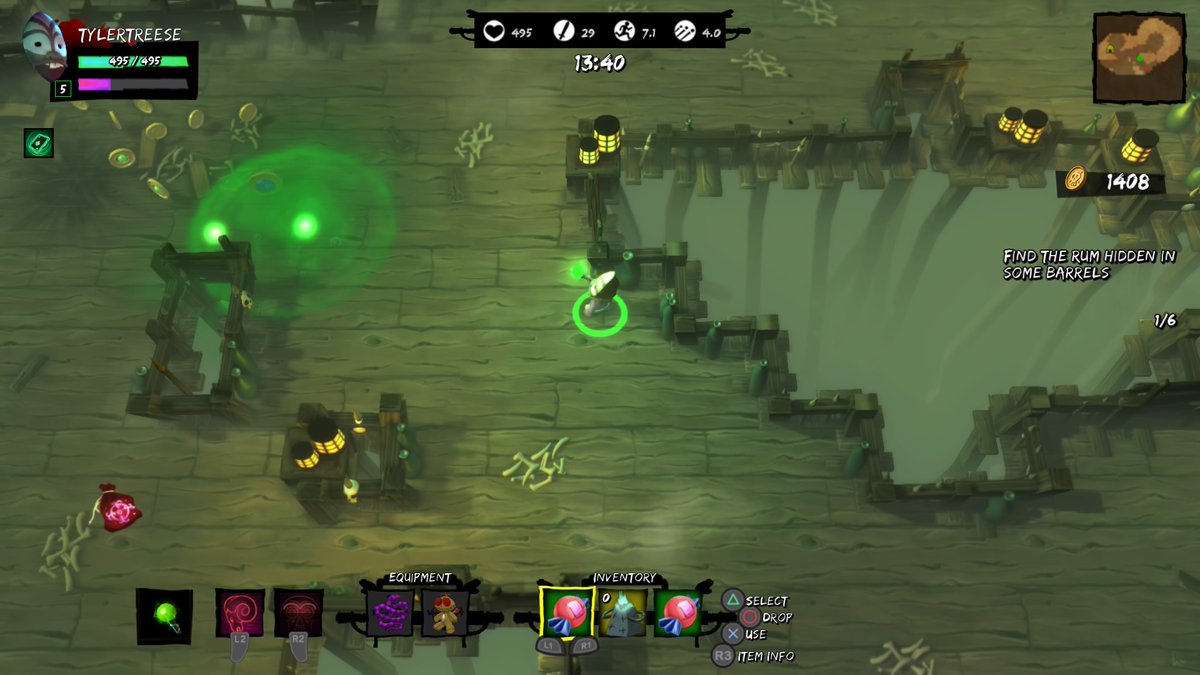 It's almost fitting that the world of 'Full Mojo Rampage' is so uninteresting since the gameplay feels all too familiar without a unique hook to it. I was immediately used to how the top-down shooter played since it's as generic as it comes. This immediate comfort isn't necessarily a bad thing, but there really isn't much else to the game other than running around with the left stick and firing projectiles with the right stick. There are several different characters to unlock (each with two special skills), but their abiltiies don't make a huge difference and are on a cooldown. The default character, who I ended up sticking with, has a powerful fireball attack and a dodge roll, but since the game isn't built around dodging it isn't nearly as useful as it seems.

Some nuance can be found in the items that fallen enemies sometimes drop, but unlike 'The Binding of Isaac' these upgrades feel minor and not so important that it can change a run from being a mess to a success. The game breaks them down into two categories: equipment and items. Equipment are passive abilities (generally stat buffs) that don't expire, while items are generally one use (such as a potion). There's no sense of mystery as to what each item can do as I could simply press in the right stick to see the description. 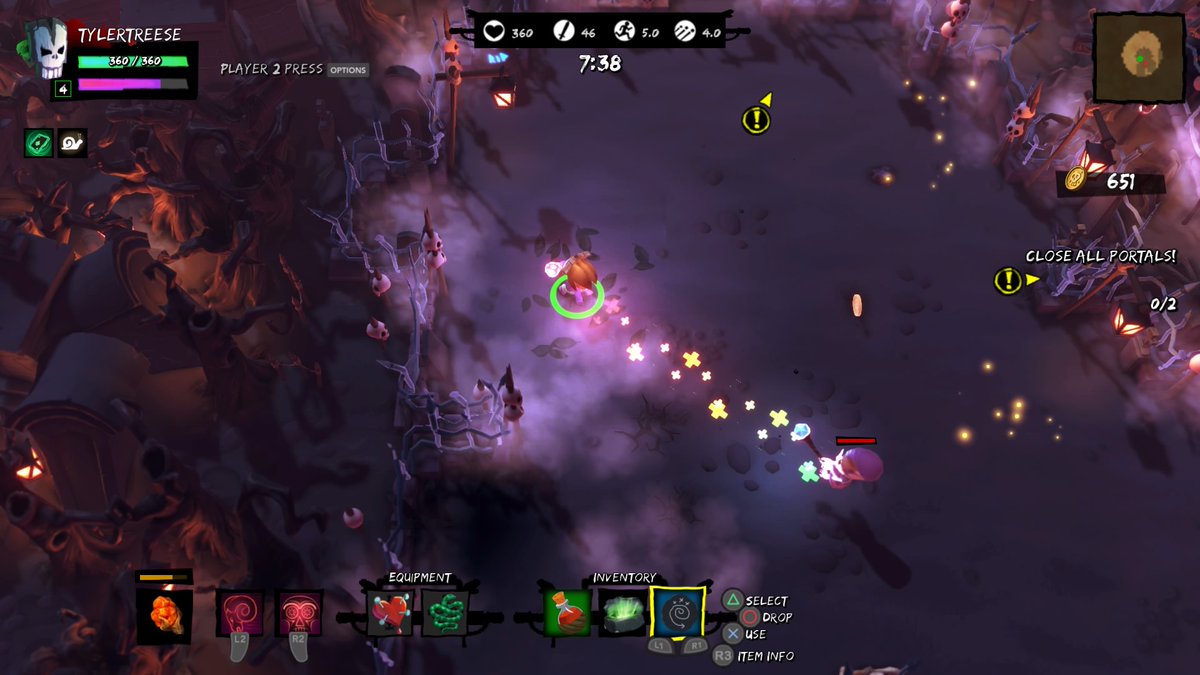 The main problem with 'Full Mojo Rampage' is that its core structure is just boring. In just about every level (aside from the boss fights), I found myself running around collecting items that were either highlighted in the map or just hidden around the map. It really feels like one long fetch quest, and it didn't matter if I was collecting rum from a refinery or spider eggs since it all played the same.

One thing that did impress me was that each level had theme appropriate enemies. This meant that I battled skeletons in a graveyard and gigantic poisonous spiders in a swamp. It all felt very natural, but since the foes all all in the same categories they felt way too similar. Every field would have a cater type enemy that would summon projectiles (be it a wizard casting fire magic or a spider spitting venom), a generic foe that would just rush at the player, and then ranged attackers. Almost every type of challenge fell into one of those three types, and I never felt like I was taking on meaningfully different challenges. 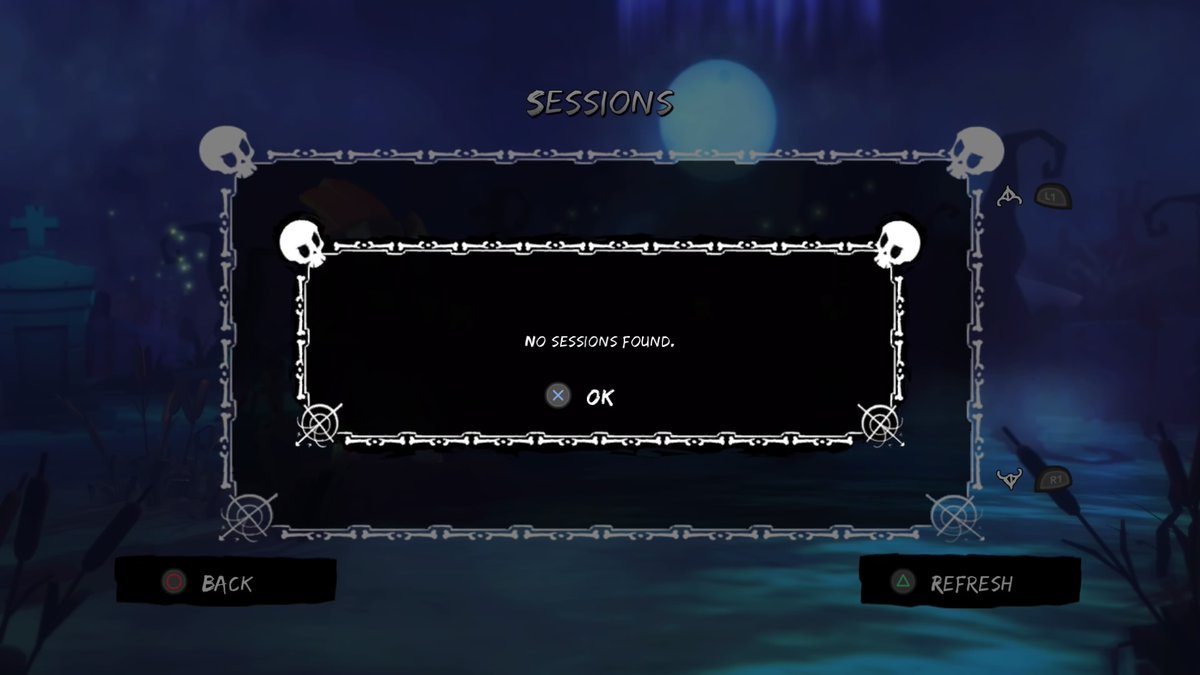 Most damning is that 'Full Mojo Rampage' made me feel like I needed to grind in order to succeed. I started off with next to no health (and could succumb to enemies in a mere second), and it never felt like skill was the ultimate decider. Levelling up is done by defeating enemies and earning medals (which are found in levels) that can be used to purchase permanent stat boosts and upgrades, and it only took a dozen or so failed attempts at the first quest to beat it, but it was only after boosting my health a substantial amount that I felt like it was ever possible to win.

Online multiplayer is also available, but it's seemingly impossible to check out since nobody is playing the game online. I tried to get into cooperative play (which is up to four players) and competitive (where eight players can play modes like deathmatch and capture-the-flag) dozens of times since the game has been out, but not once did I find another user. Cooperative play is a cool addition, but it's also absolutely useless unless there is somebody to play with online.

Frustratingly, when the game is unable to find a session after five seconds it pops up a message saying "No sessions found." I then had to manually refresh over and over again to search for a match instead of it automatically doing so. So not only is it near impossible to find anyone playing, it becomes a hassle to even attempt it. 'Full Mojo Rampage' should've taken a page out of fighting games and allowed players to search for opponents, while playing quests or browsing other menus since as of now all the hard work that was spent on multiplayer is all for naught. 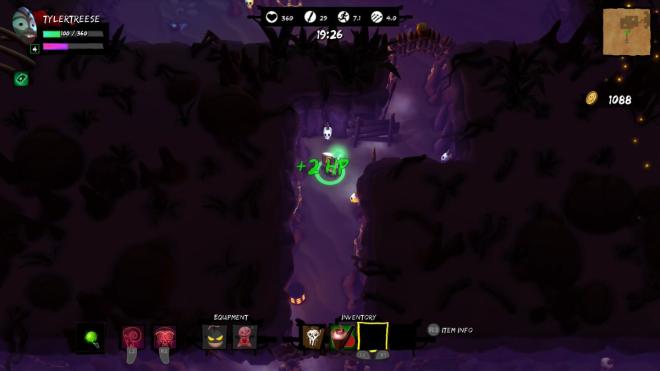 While technically fine, 'Full Mojo Rampage' just looks boring. Unlike other roguelikes like 'Spelunky' where I was constantly anticipating what enemy designs I would see next, I never was excited to see more of this world. Over The Top Games was unable to put any unique twist on the many skeletons and bugs I battled, as they were just generic foes that take up space. No reason is given to care about the world or its inhabitants, and the voodoo theme just isn't enough to stay interesting.

Another issue is that the user interface is unnecessarily busy. It isn't customizable, and the majority of the information it displays isn't worth knowing constantly. I don't need to know my entire stat sheet and how long I've been in a level, and this only served to obscure enemies and made the game unfair at times. Several times I was attacked by enemies that were covered up by the gaudy interface, and it was infuriating to lose a good run due to not being able to see a foe. 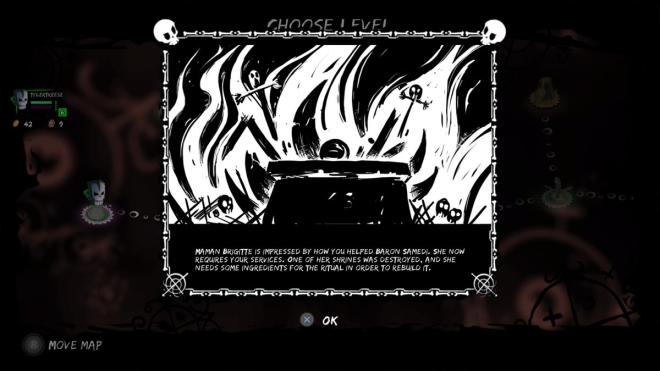 If there's one aspect where the title succeeds, it's in sound design. The soundtrack has a fun spooky vibe to it that provides a nice background for the action that takes place on screen. It's more about creating an atmosphere than being catchy, so while I was never humming along to the music, it definitely got its job done. The sound effects are also really well done, with my character's magic whizzing through the air, and enemies make a satisfying death cry when defeated.

After I completed a quest, I unlocked another difficulty setting to play through the same set of levels. It's slightly more than just upping the enemy's damage output, as the bosses ended up being more difficult and enemies would drop bombs after they died. According to the main menu there are 5 additional difficulty levels in total (which are unlocked by beating the one before them), but I had little desire to unlock these. The game isn't much fun regularly so there was little incentive to play even more challenging levels since the issue isn't that 'Full Mojo Rampage' is too easy. Ultimately, completionists will find plenty to do here, but I found little to keep me coming back.

Over The Top Games also added a survival mode, which tasked me with disposing 30 waves of enemies. Once that is completed, it unlocks an endless survival mode. This mode relies entirely on the game's combat, and upon playing it, I realized that I just didn't find it very fun. It's not interesting on a mechanical level nor is it so polished that it's immediately satisfying. 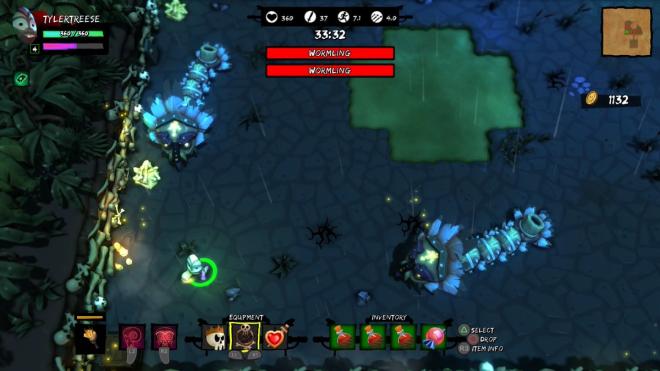 'Full Mojo Rampage' is a forgettable twin stick shooter that offers up very little when compared to the genre's best. It doesn't have the satisfying gameplay of 'Assault Android Cactus' nor the addictive grind of 'Enter the Gungeon.' It's more frustrating than fun, and there's little reason to ever play this when its contemporaries are so far ahead.