No Brakes Games is a Lithuanian company that began in 2012 with a rally racing game, and has put out a few mobile titles since then. 'Human Fall Flat' has been a playable prototype for some time, using proceeds from the unfinished version to pay for a full release on Steam. Console versions are planned for later on in 2016.

'Human Fall Flat' is not, as the title suggests, a game about throwing or smashing humans. At least, not in a grisly way. The protagonist is Bob, a squishy little dude wandering around in a dream. Bob dreams a lot about falling, but falls do not kill or even flatten him. Upon landing, he gets up in the same room he was just in, with most of his modifications to that room left intact. 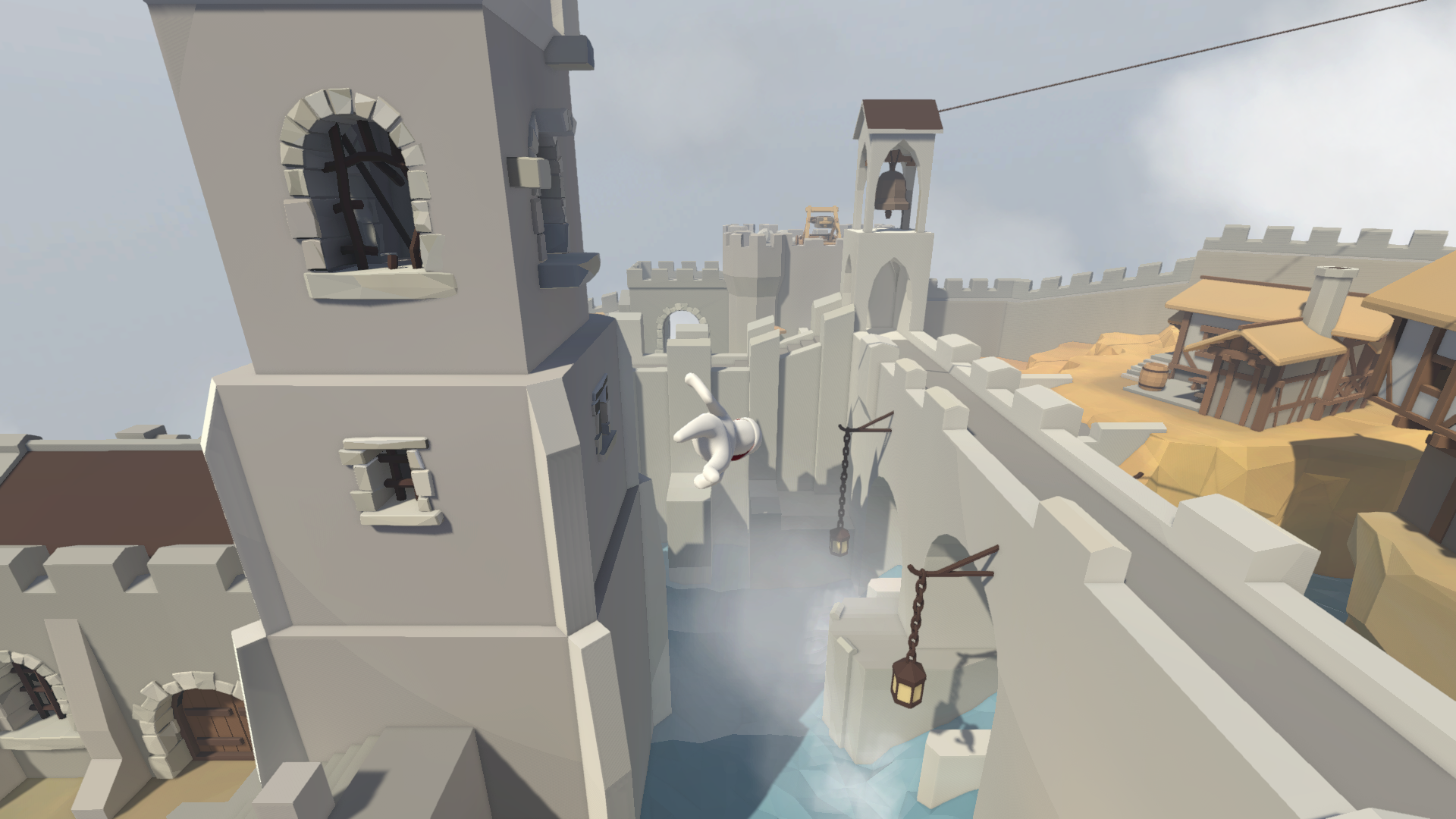 Bob's dreamscape happens to be filled with puzzle rooms. To solve the puzzles, he must break through walls and windows, move around blocks and switches, make daring jumps - you know, standard platforming/puzzle stuff. But the big difference is that Bob seems to be permanently intoxicated or reenacting 'Weekend at Bernie's. He stumbles around blithely, completely indifferent to falling objects, crushing elevators, or other dangers. He cannot be killed, after all, and has nothing to fear from the vagaries of this world. Each of his floppy arms is controlled independently, and inadvertently derping the grabbing of an object can be its own reward.

Much like 'SUPERHOT' used the concept of slow motion or bullet time as the basis for an entire game, 'Human Fall Flat' mines another common mechanic: the ragdoll. (Much like predecessors 'OctoDad' and 'Jellycar.') Bob is a somewhat controllable ragdoll and moves in wiggly, unpredictable ways, eliciting constant giggles and even deep belly laughter from me as he stumbles around recklessly, completely oblivious to the laws of human anatomy. This is one of the most consistently hilarious games I've ever played, and I'm not sure if that's a mark of quality for 'Human Fall Flat' or a mark of shame for my own gaming repertoire. Even now, watching the videos I've made and those of others, I can't help but giggle uncontrollably watching Bob's flabby little form try to navigate through the levels. Something as simple as pulling a switch or jumping onto a platform can be infinitely comical.

It's in between fits of laughter that I try to accomplish anything remotely productive. The physics may not be completely accurate but they make sense, so I can usually anticipate what items will do after I throw or drop them (usually). After the tutorial section, levels are laid out in massive grids with interconnected rooms. The rooms are kind of like psych exams - there's no right or wrong answers, you can just wing it and if you manage to open the door, you have completed the puzzle. Some rooms have a single critical path, and opening the door is a matter of execution - moving Bob around can be a chore in and of itself, but typically an entertaining chore. Other times there are several different options to get by, some off the beaten path. I would struggle for a long time with a room, finally hauling some stupid block or plank into position and vaulting myself to freedom, and then watch a video of the same puzzle solved via a completely different means. The end justifies the means in 'Human Fall Flat'. Don't agonize over finding the "right" solution, just find any solution.

Playing around within the world is its own kind of fun. When the puzzles were too puzzling or when I just couldn't be bothered to solve them, I also had fun bouncing around as Bob, throwing things off the edge, throwing myself off the edge, or gratuitously smashing out windows. For the most part, however, the puzzles are of a high quality. 'Human Fall Flat' has held my attention far longer than most puzzle games do not only because of its whimsical personality, but because No Brakes has put a lot of effort into the crafting of engaging, open-ended activities that use physics in a novel fashion. 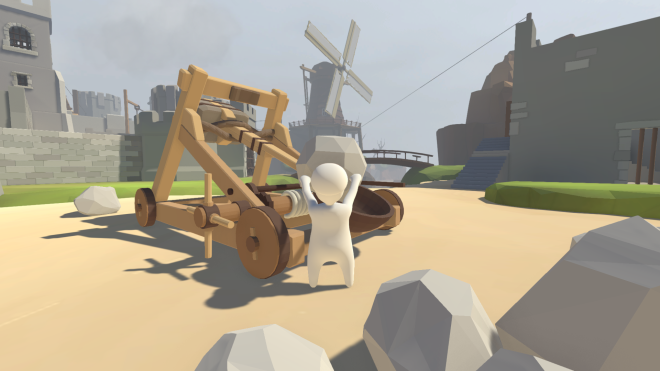 'Human Fall Flat' has a blocky, rather bland presentation that looks like what would happen if 'The Witness' dialed down its color to near monochrome levels. The physics, gravity, and antics of Bob are far more exciting than any of its textures or modeling, although they have a certain charm. Bugs are rare, although Bob behaves in such odd ways that odd things are inevitable, like when I was experimenting with the catapult. These are probably considered features and not bugs, actually. 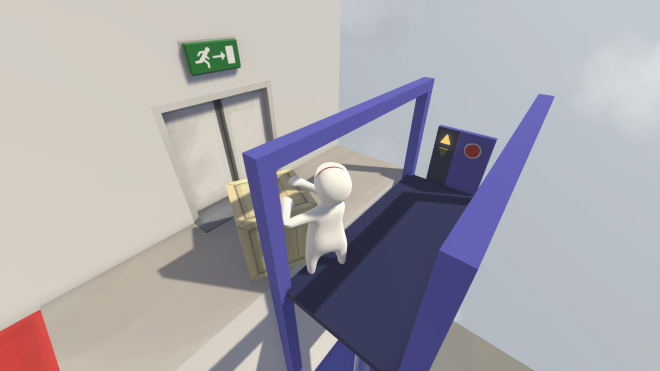 The soundscape consists of ambient noises and the occasional sound effect. There are a few tutorials recorded like 80s PSAs, complete with little instructional videos. The music tracks are quirky and calming, but there are only a few of them and they play rarely. I should note that No Brakes plans on adding more in the final release.

There are different solutions for some the puzzles, but this doesn't necessarily equate to a titillating replay for a game where you already know how to beat everything. It has a decent amount of content for its price point and offers local co-op, so a buddy can join in on the squiggly shenanigans. 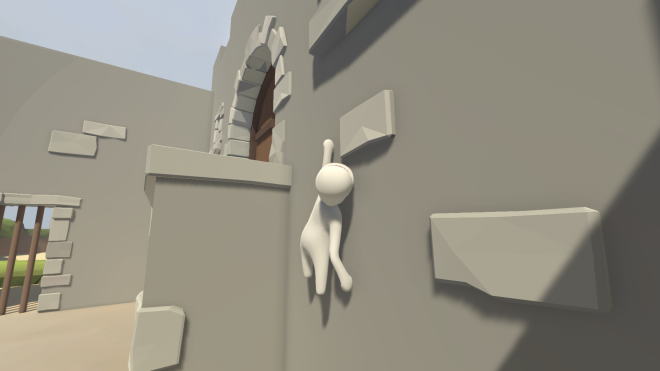 'Human Fall Flat' is a brilliant, remarkably funny twist on classic platforming and puzzle solving. Its problems are minor: the controls and audio are a bit rough around the edges, and a few of the puzzles are too simple for their own good. Whatever it lacks is easily replaced by simple elegance in both level design and personality.