'Firewatch' is the first game from San Francisco-based Campo Santo, which includes the creative leads from both 'The Walking Dead' and 'Mark of the Ninja'. It was released for desktop and PS4 earlier this year and is now available for Xbox One.

In 1988, massive wildfires swept through Yellowstone National Park. The media was dumber and more sensationalist than usual and gave the public the impression that the park was being destroyed, although in reality fires can be a good thing for a forest. The US Forest Service was given a larger fire budget afterwards, much of which was allocated to more firefighting and lookout personnel. In 'Firewatch', the player is Henry, a 1989 Yellowstone fire lookout hire. This is his first summer as a lookout. He is not a ranger or firefighter by trade, but has come to Yellowstone to get away from his responsibilities.

'Firewatch' is firmly in the genre of walking simulator. The game's playthrough consists of a relatively linear storyline with a heavy dose of nature exploration. The map is not huge, but Henry is only a regular guy and must stick to established trails to get around, limiting his mobility. On his second day on the job he finds a cache of sturdy ropes, allowing him to traverse steep rock slides and opening up a few more areas. He can interact with the world mostly through observation, and sometimes by picking things up for closer examination. 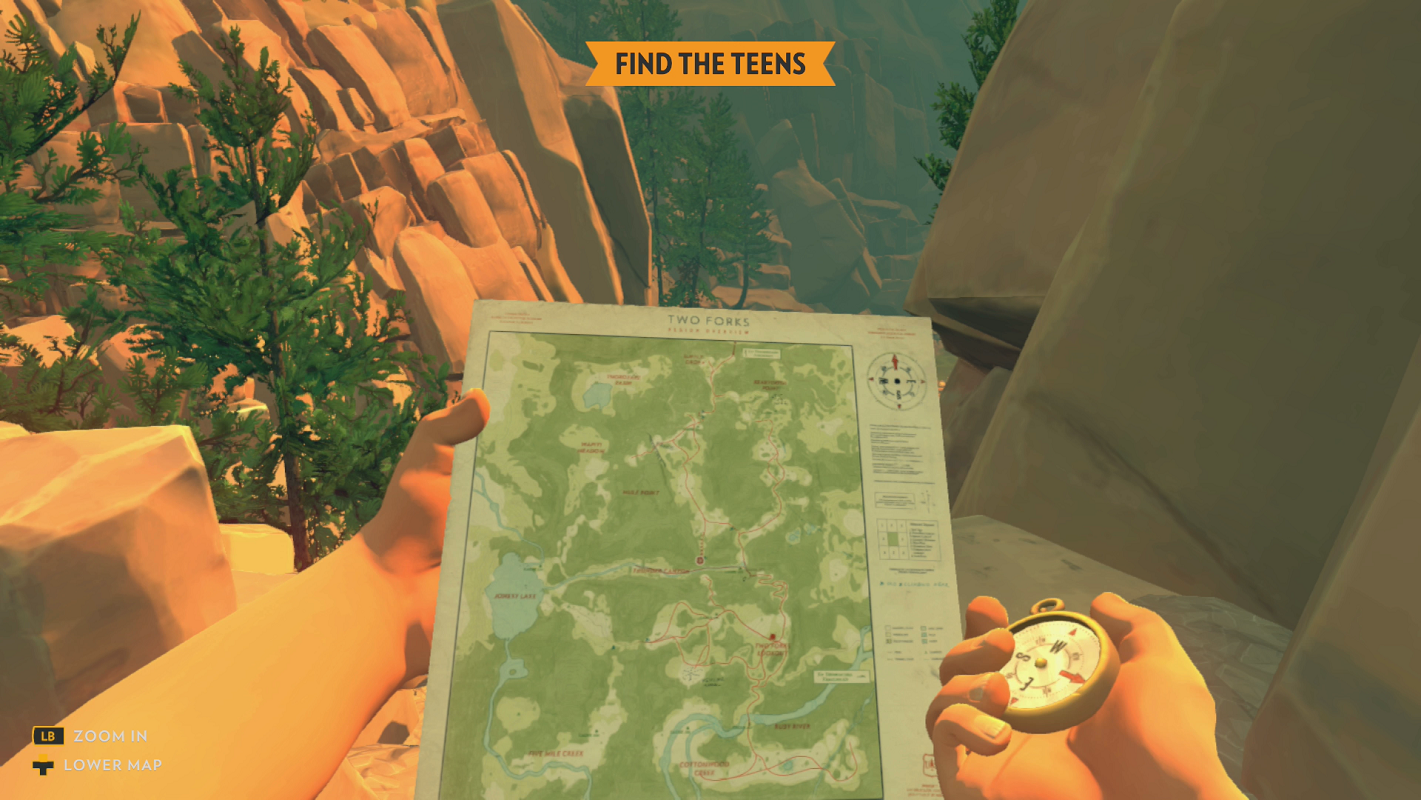 Henry frequently converses with his supervisor Delilah by radio. She is also a lookout but at a different tower, in an area Henry cannot reach. For most of the game she is his only source of social interaction. She gives Henry his daily tasks, like searching for bear tracks (no thanks), chasing off drunk teens, and investigating broken radio lines. Sometimes he even looks for fires. 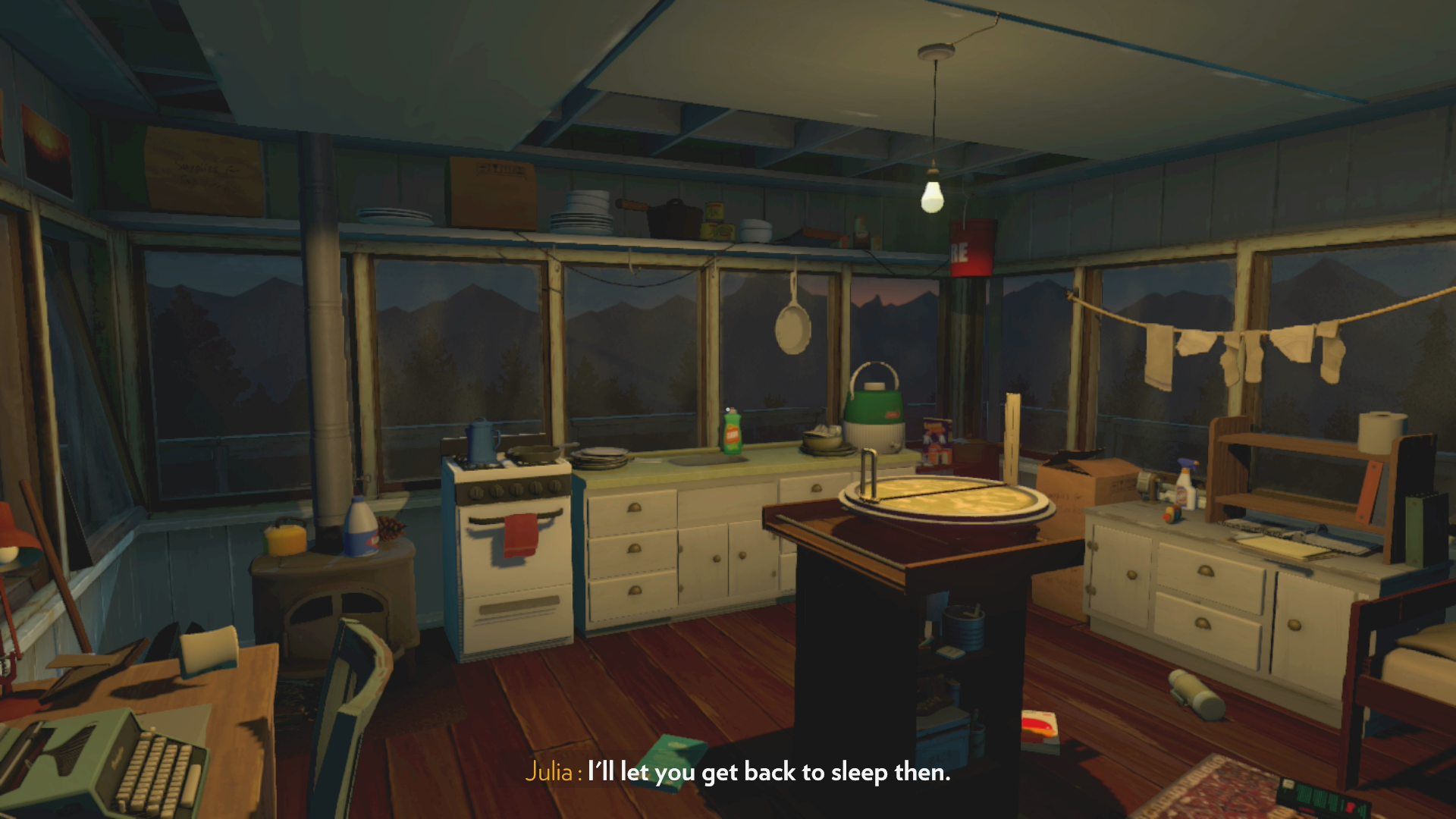 Delilah is a curious sort and begins prying into Henry's past - she knows that he is here to escape something, as that is the only reason anyone would do this job, apparently. Over the course of the game, Henry and Delilah develop a genuine, believable friendship that occasionally borders on something more. It is very sweet to watch (or listen to, rather - Henry rarely sees other people), and the game is almost completely bereft of the cheesy dialogue that plagues so many games. 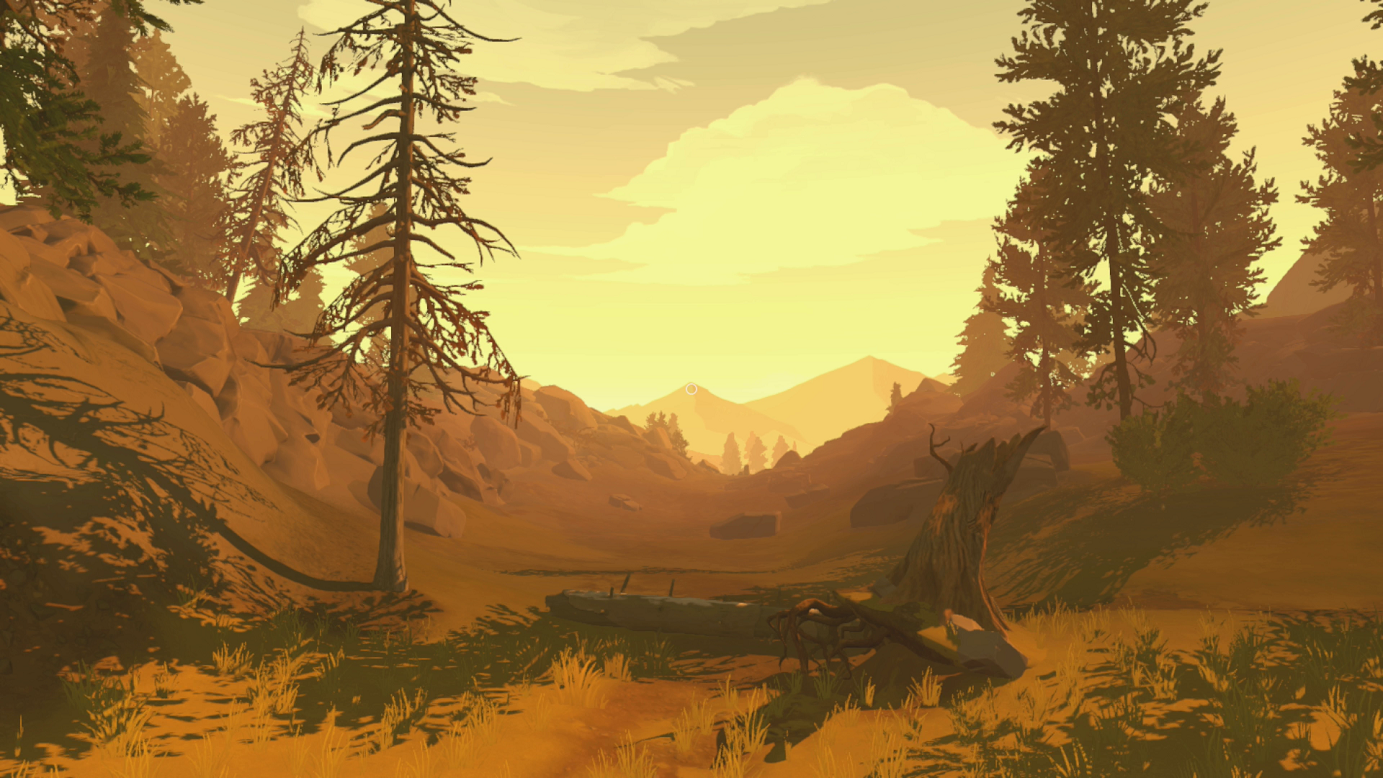 The storyline takes a dark turn about halfway through, but never stumbles into anything too melodramatic. Being so isolated takes its toll on the psyche, and despite their mutual affection, Henry and Delilah occasionally snap at each other or otherwise become frustrated. Henry is usually given a choice of response, ranging from wisecracking to panic as the situation requires, and can choose not to speak if the player desires. As their paranoia deepens further into the season and more bizarre things happen to them, I was given a choice to slowly give in to the fear or put my complete faith in Delilah. 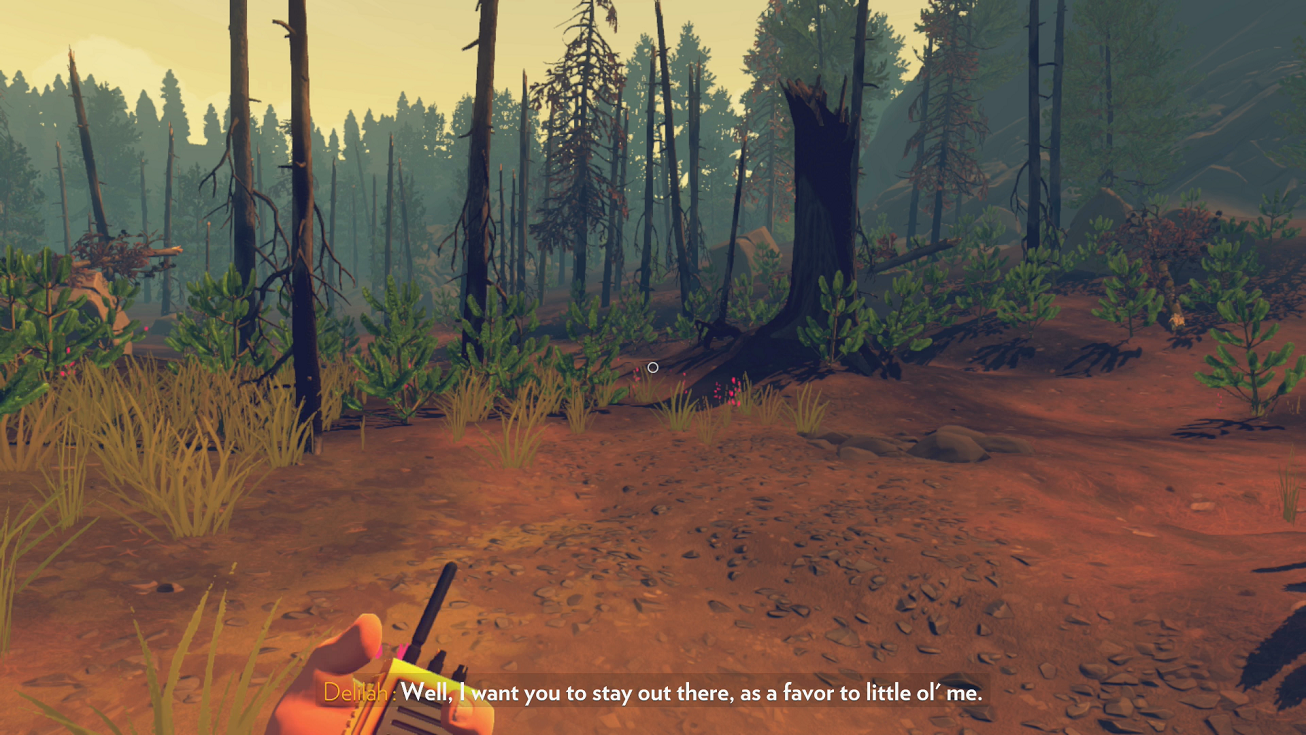 Walking simulators usually bore me. I can appreciate the pretty vistas and sometimes interesting puzzles or notes, but the stories themselves are hit or miss. In 'Firewatch', there is no supernatural element or fantastical setting. It's just a couple of people being people, and while that may seem like a monotonous setup for a video game, remember that many of the best movies, books, and TV shows are only about routine human life in a slightly dramatized form. What makes them so interesting is how these people interact with one another - a more expensive variety of people watching where we don't have to suspend disbelief as much as we do for other kinds of pop culture. Campo Santo wrote a relationship that I can believe and get involved in, and then they surrounded it with a beautiful natural park and threw in some increasingly weird occurrences that a stressed mind like Henry's can quickly blow out of proportion.

To be clear, 'Firewatch' isn't necessarily a cheerful game. Some of the best moments are the dad jokes exchanged by the two leads and their slow path to friendship, but there are also depressing exchanges and conversation choices that made me feel crappy. As the player I control Henry, but this is a character with his own agenda and motivations and I can only influence him so much. 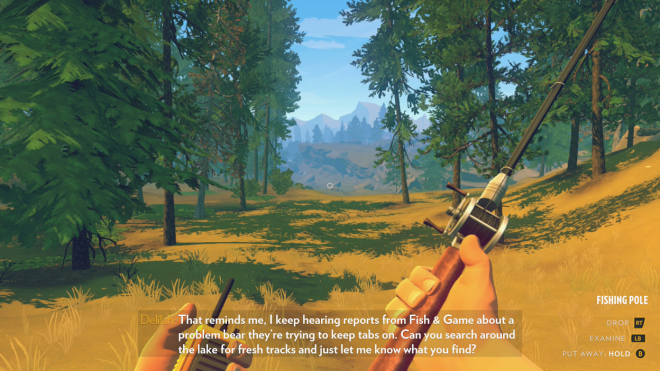 The art design comes from the fanciful, colorful work of artist Olly Moss, and here the Unity Engine renders his portraiture into a not-quite-cel-shaded form. Surfaces look slick and glossy, much like 'The Witness'. The natural panoramas of trees, meadows, and valleys are rendered beautifully. There is little in the way of creature models or animations and not many animals at all. The framerate is usually fine but for some reason took a nosedive when I stepped into a certain tent towards the end of the game, but that was a short scene. 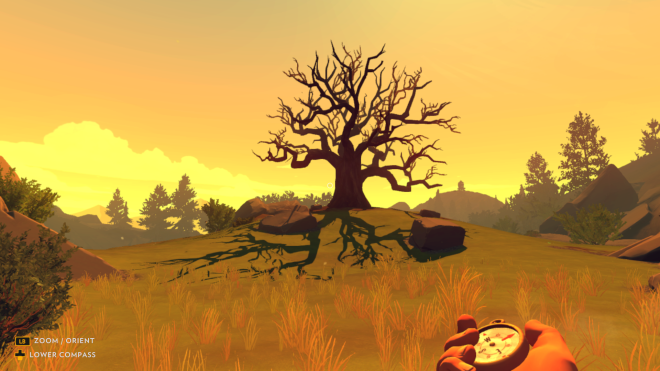 Most of the sound effects are pure nature, just like you'd expect from a massive and mostly pristine forest. The music is soft and somewhat regretful, like if wildlife documentaries and a Wes Anderson soundtrack had a lovechild. The voice acting is the real art in 'Firewatch' and the main reason why it is such an immersive experience. The two leads are Cissy Jones, prolific game actor and Telltale collaborator, and Rich Sommer, the instantly recognizable Harry Crane from 'Mad Men'. They do a spectacular job.

This is a story with basically one outcome, and despite the conversation choices along the way, it's going to get you to the same place. It could perhaps be revisited periodically to uncover the little nooks and crannies in both the dialogue and Yellowstone. 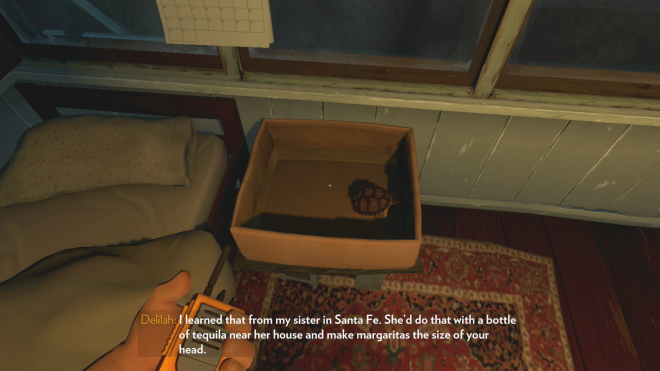 The Xbox release includes an audio commentary and a free roam mode. The commentary has a lot of interesting info (after finishing of course - spoiler alert), and free roam lets the player just walk around the map endlessly, adopting turtles and scaring the pants off of racoons. 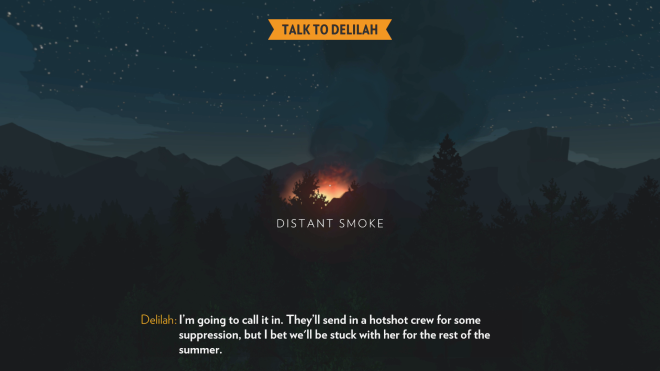 After finishing 'Firewatch', I sat in a kind of stunned silence for awhile, the same way I do after watching a particularly powerful movie. It's the rare game that makes you feel something human, something ethereal and difficult to describe. It's not a long game but I finished it in one sitting, completely spellbound. If you are at all a fan of gaming as a method of storytelling, you should probably play 'Firewatch'.