The Game Itself
4 Stars
The Video: Sizing Up the Picture
3.5 Stars
The Audio: Rating the Sound
3.5 Stars
Replay Factor
1.5 Stars
Bottom Line
Recommended

'Children of Arkham' is the second episode of Telltale's 'Batman' series, following 'Realm of Shadows'.

In our review for 'Realm of Shadows' I wrote that Telltale wasn't taking any risks with their source material. That episode played it safe, introducing a few well-known characters with the odd quirk (a young, skinny Penguin, Selina Kyle dating Harvey Dent, etc.) that would aggravate only the most purist of Batman zealots. In 'Children of Arkham' they have gone in completely the opposite direction. They are killing people off, mudslinging characters who are almost never mudslung, and thinking up very creative origin stories for a lot of these soon-to-be heroes and villains. In short, this episode has precious little in common with its predecessor, and so far that's a good thing.

It should probably be called 'Telltale's Bruce Wayne' because so far we have played mostly as the billionaire orphan and not his costumed alter ego. I would hazard a guess that 90% or more of 'Children of Arkham' is firmly in the oxfords of Wayne, although there is one segment in which the player can choose to harass the mayor as one or the other. I chose Wayne because you catch more flies with honey than vinegar, but some flies just refuse to be caught. Bullying Mayor Hill would have certainly ended in the same result. 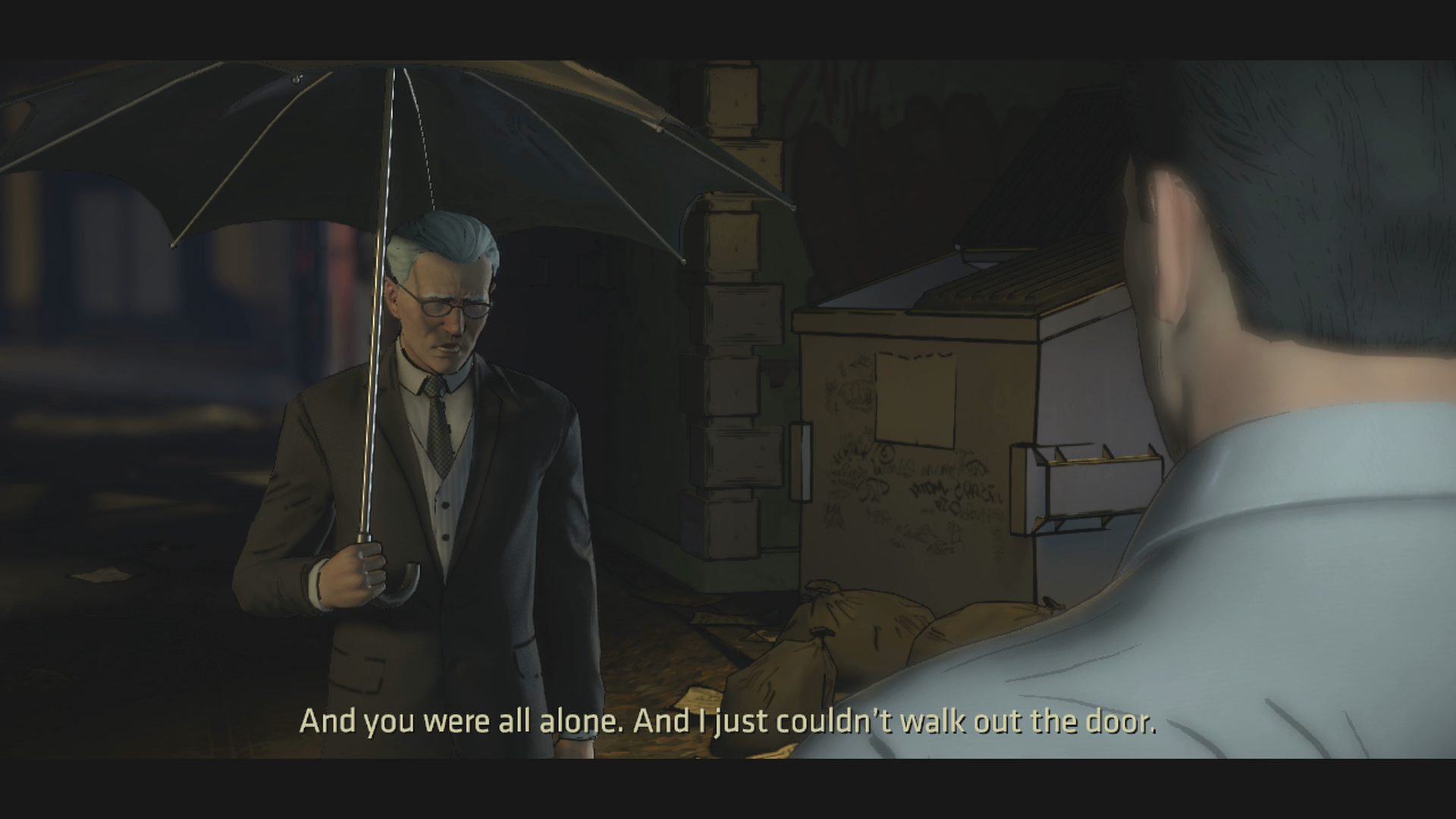 Dealing with crime lord Carmine Falcone in the last episode showed a lack of restraint on Batman's part, veering into dangerously violent territory. Batman still doesn't kill (yet? Is it possible with modern Bats?), but he got about as close as you conceivably can. In this episode Wayne changes tack and can be kind, even compassionate, with people who he doesn't need to be compassionate with at all. It makes me wonder if instead of an outlet for channeling his anger and loss, he begins to see his crimefighting persona as a liability, an embarrassment, or even a Mr. Hyde kind of monster that he fears. 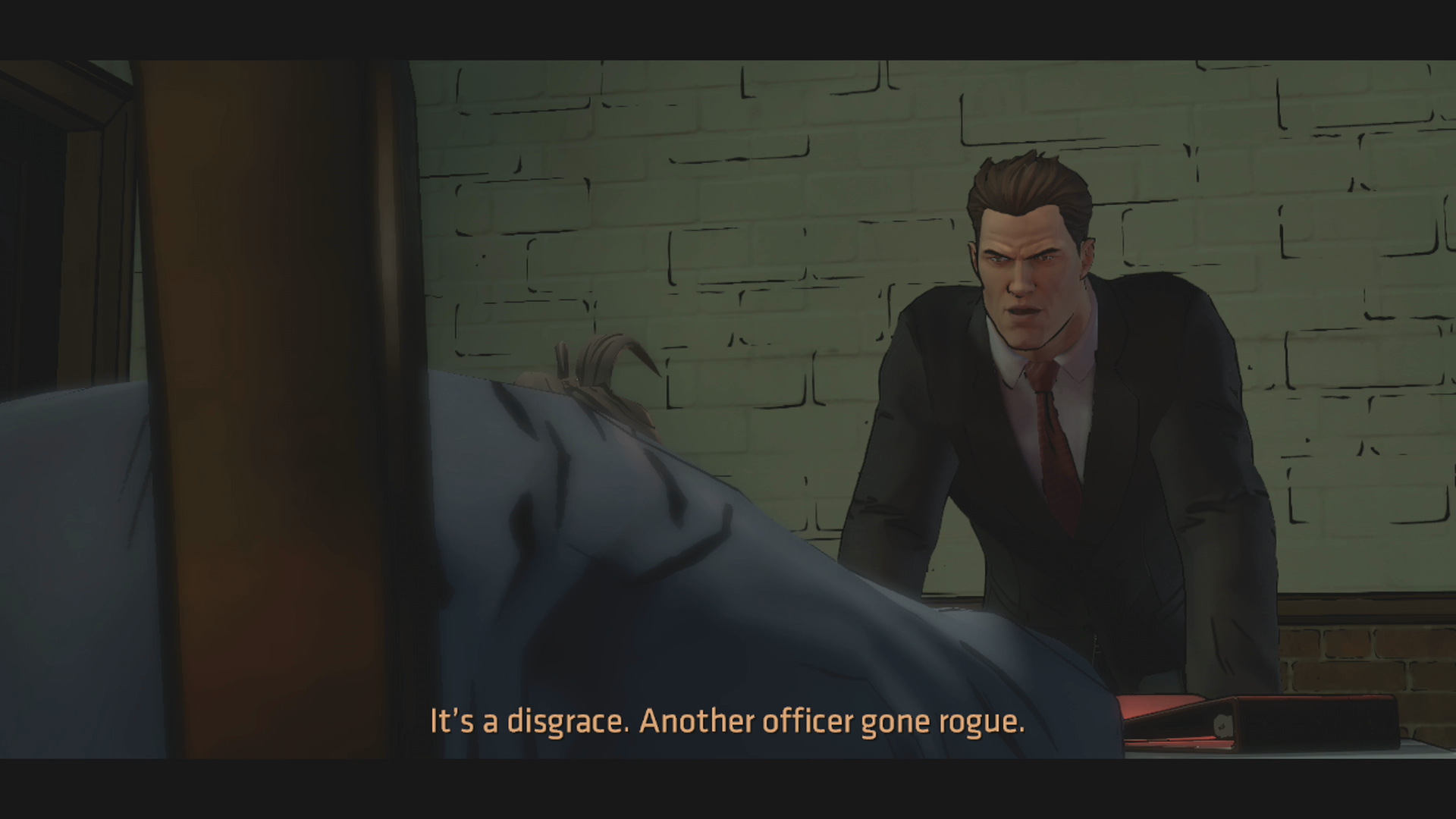 Towards the end of the short episode, Telltale picks up the pace of the narrative even further by hinting at a larger conspiracy of criminals. This is done in a stereotypical way, with a masked maniac of unknown identity blabbering about revolution on TV while Penguin is holding up a mayoral debate. That is easy to wave off, but the writing that is going on with Falcone and Mayor Hill and the Wayne parents is much more interesting, and also tantalizingly out of reach. Telltale's recent releases have become predictable enough to guess where the story is going, but I cannot say that of 'Children of Arkham'. I am thoroughly and happily in the dark. 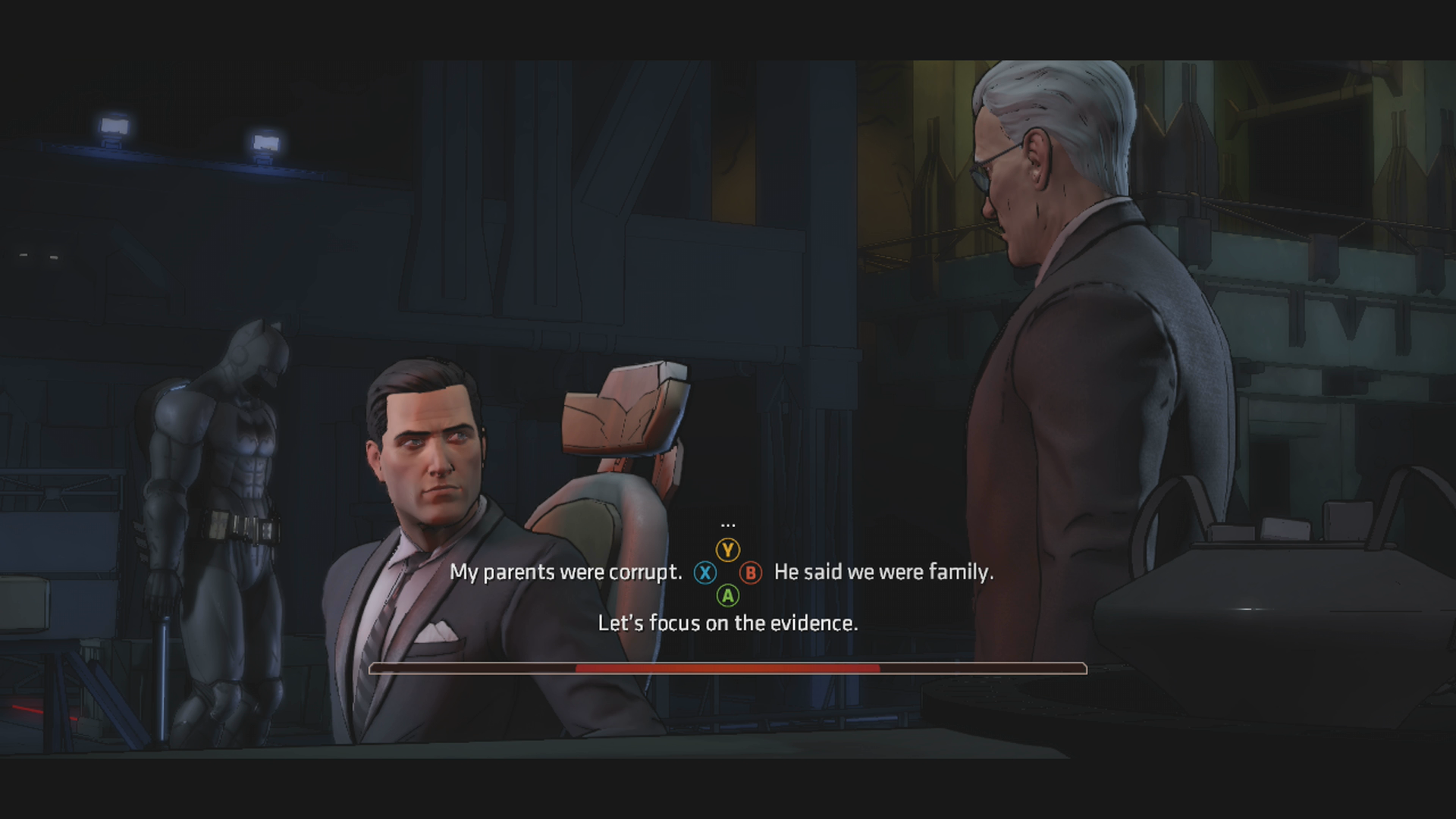 Interactivity for this episode is low, even for an adventure game. There are few fights and even fewer big decisions. On the other hand, at least two of the decisions had me pausing the game to think about where I wanted to go, because both choices were so undesirable. I can't say that all players will be so conflicted, but usually I know immediately which choice I want to go with, and I think it's a nice change of pace to have more wrinkles in the storyline. The investigative bit from the last episode is gone, and the scripted, 'Sherlock Holmes' type fight (where Batman sets up a string of attacks for a long payoff) has been cut short. 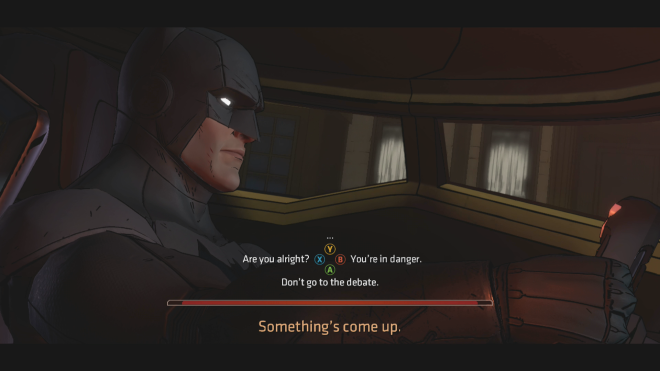 'Children of Arkham' continues to show little progress in the Telltale Tool, but it also manages to keep up with framerate and lip syncing, more or less. As Telltale episodes go it is pretty fluid. Art design and set pieces are dry but the first scene, with Wayne quietly visiting Crime Alley to pay respects, is handled very well. 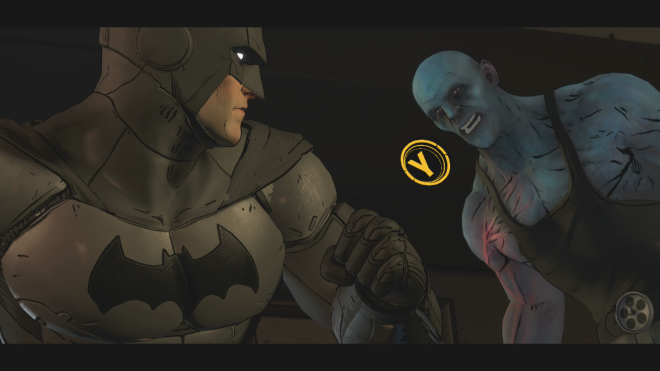 Not a lot of new voice actors yet, but the ones we have are all doing a good job. The audio troubles (artifacts, syncing, awkward silences) have cleared up to a halfway decent level.

I didn't second guess my choices very much in this episode. It's sharp, but I doubt I'll be playing through it again before the next one drops. It's a short episode; barely more than an hour. 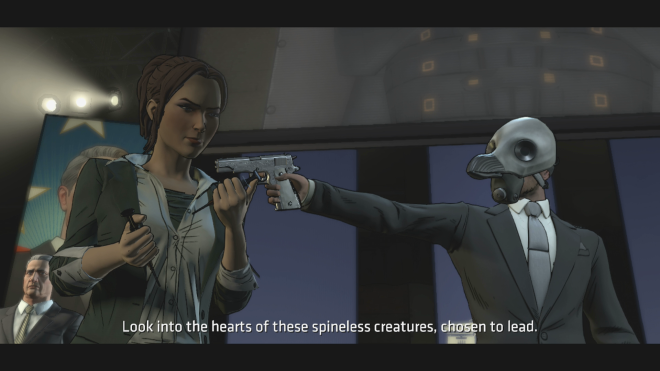 'Batman' is gaining steam, a development I hope Telltale can maintain for the rest of the season. I am enjoying the narrative focus on Wayne and the dialogue that, while maintaining a familiar comics camp, can also be genuine when necessary. 'Children of Arkham' easily surpasses 'Realm of Shadow'.