The Game Itself
2 Stars
The Video: Sizing Up the Picture
2.5 Stars
The Audio: Rating the Sound
3 Stars
Replay Factor
0.5 Stars
Bottom Line
Skip It

'Oh...Sir!! The Insult Simulator' is from Polish studio Vile Monarch, which also worked on 'Crush Your Enemies'. The first version was created in 42 hours at an Artifex Mundi-hosted game jam.

'Oh Sir!' was inspired by the Monty Python 'Dead Parrot' sketch, in which a man enters a pet shop to demand a refund for the dead parrot he was given. The pet salesman proceeds to explain away the parrot's lack of activity as "resting", "pining for the fjords", and other nonsense. There are no real insults except for John Cleese accidentally calling the man "miss", but it's funny for the non sequiturs and overdone accents. 'Oh Sir!' dials into that same dry British humor in the format of a turn-based word game, where each player selects an item from a list of words to put together into a muted, somewhat polite indignity. 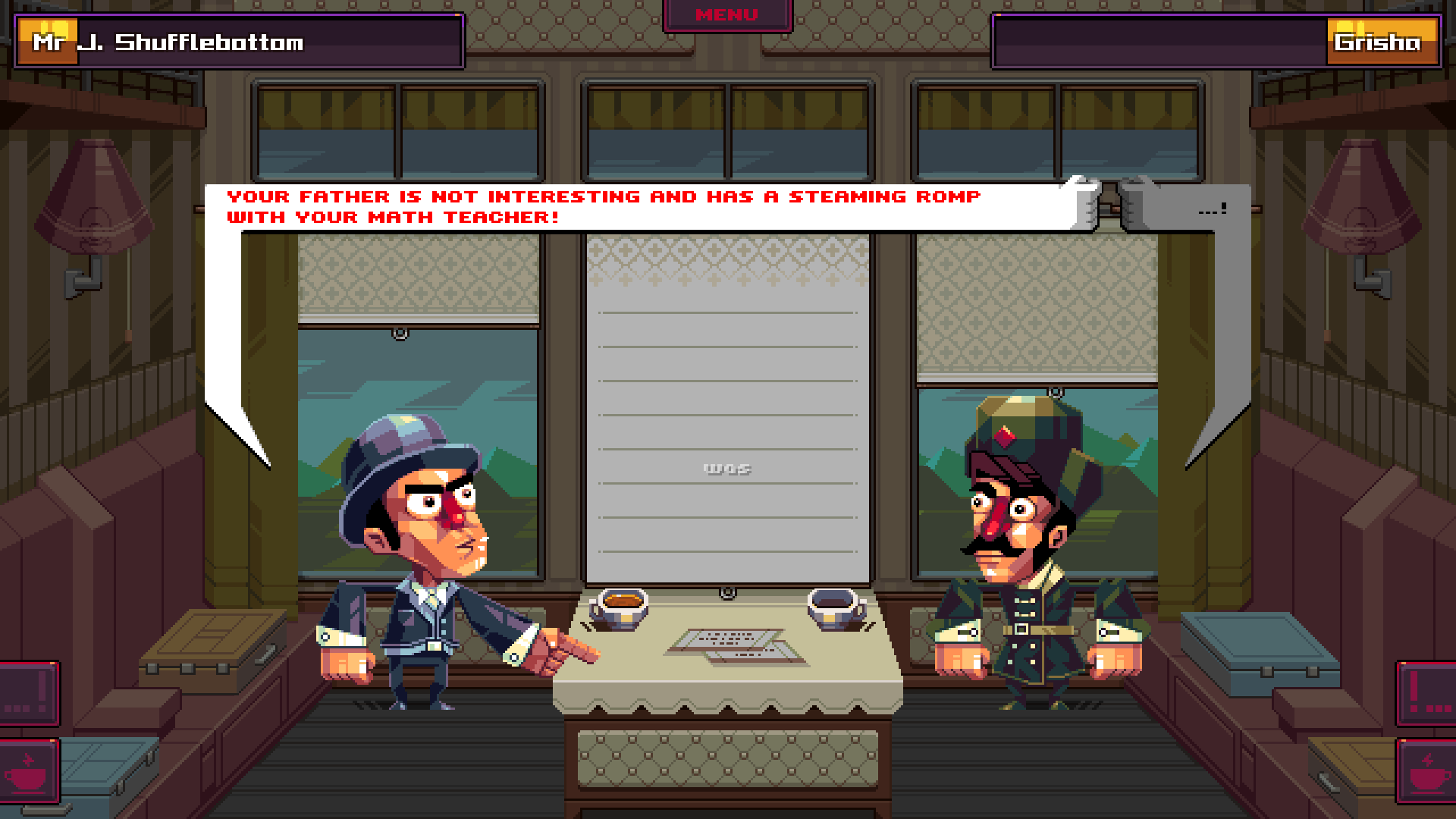 Selecting a word or phrase removes it from your opponent's list, so there is a sense of strategy in denying them choice insults or forcing their sentence to end abruptly, causing them to lose a turn. The quality of the insult determines the player's score and subsequent damage to the opponent's health. Arbitrary modifiers from the environment, the players themselves, the background scenario, and combos can all add points. For instance, using two insults in a row about the opponent's father is considered rude and worth extra points, so it's worth it to grab the phrase "your father" on subsequent rounds so the other person can't use it against me. The game has a brief tutorial but it does a poor job explaining how the point values are actually calculated or how the turns work, but the system itself isn't particularly complicated. In addition to the ten or so words available to both insulters, two special phrases are available only to me, and can be swapped for a different set with a quick cup of tea (of course). It is usually better to steal choice things from the common pool first and then use the private ones to finish up a sentence. 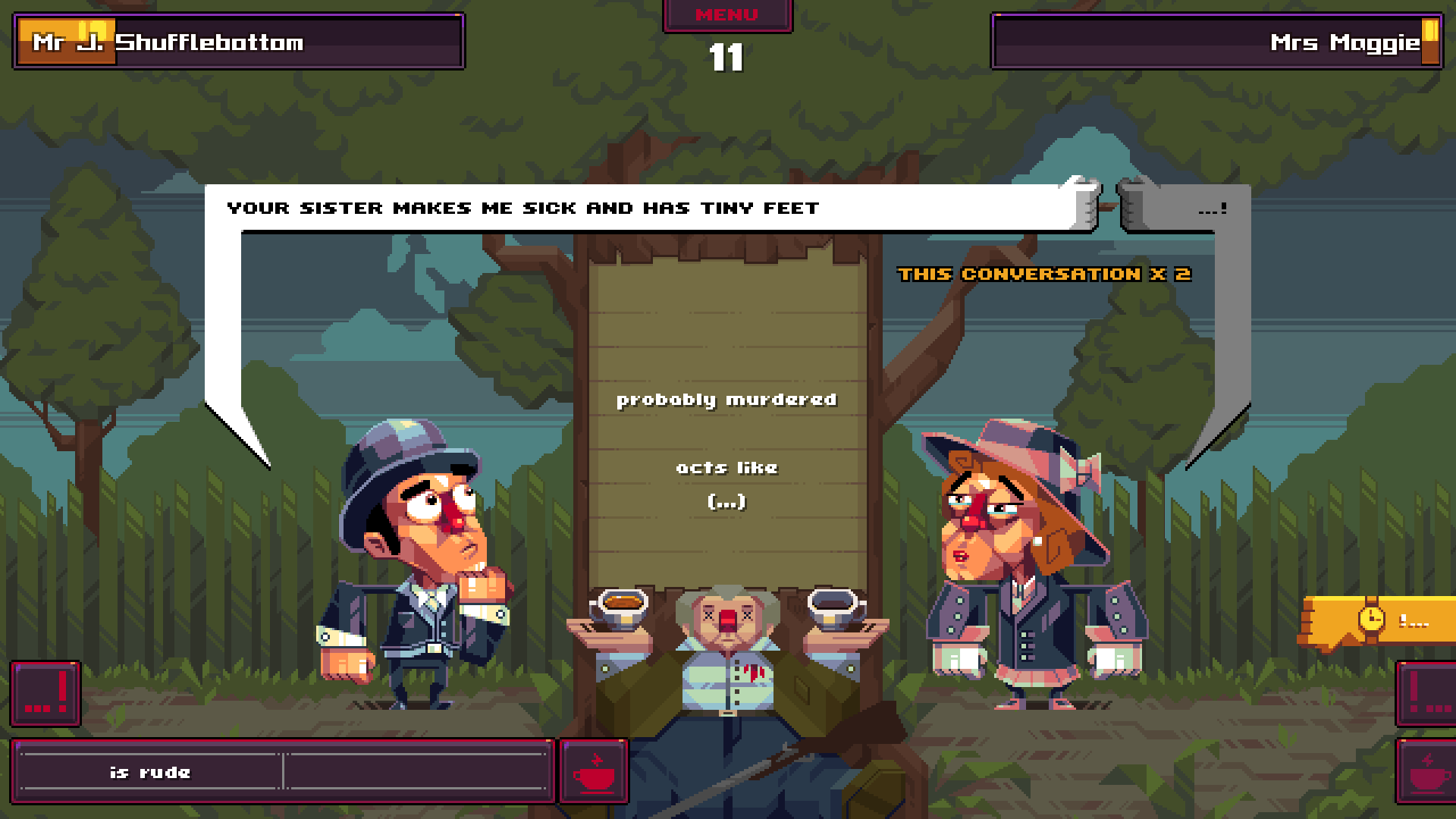 There is a wry humor in how posh and inoffensive the comments are, but that novelty fades quickly and 'Oh Sir!' becomes a very tedious process. Many of the words pop up over and over again, and each variation of the same joke is less funny than the last. There's only so many times that accusing your sister of never watching 'Star Wars' or suggesting that she had an affair with her math teacher can elicit a courteous sniff from me (not even a polite chuckle, I'm sad to say). The word pool isn't very large, probably because the developers insisted on voicing every line in overwrought English accents. After two matches, each about ten minutes long, I felt as though I had experienced the sum total of what 'Oh Sir!" could offer me, at least in the single-player mode. 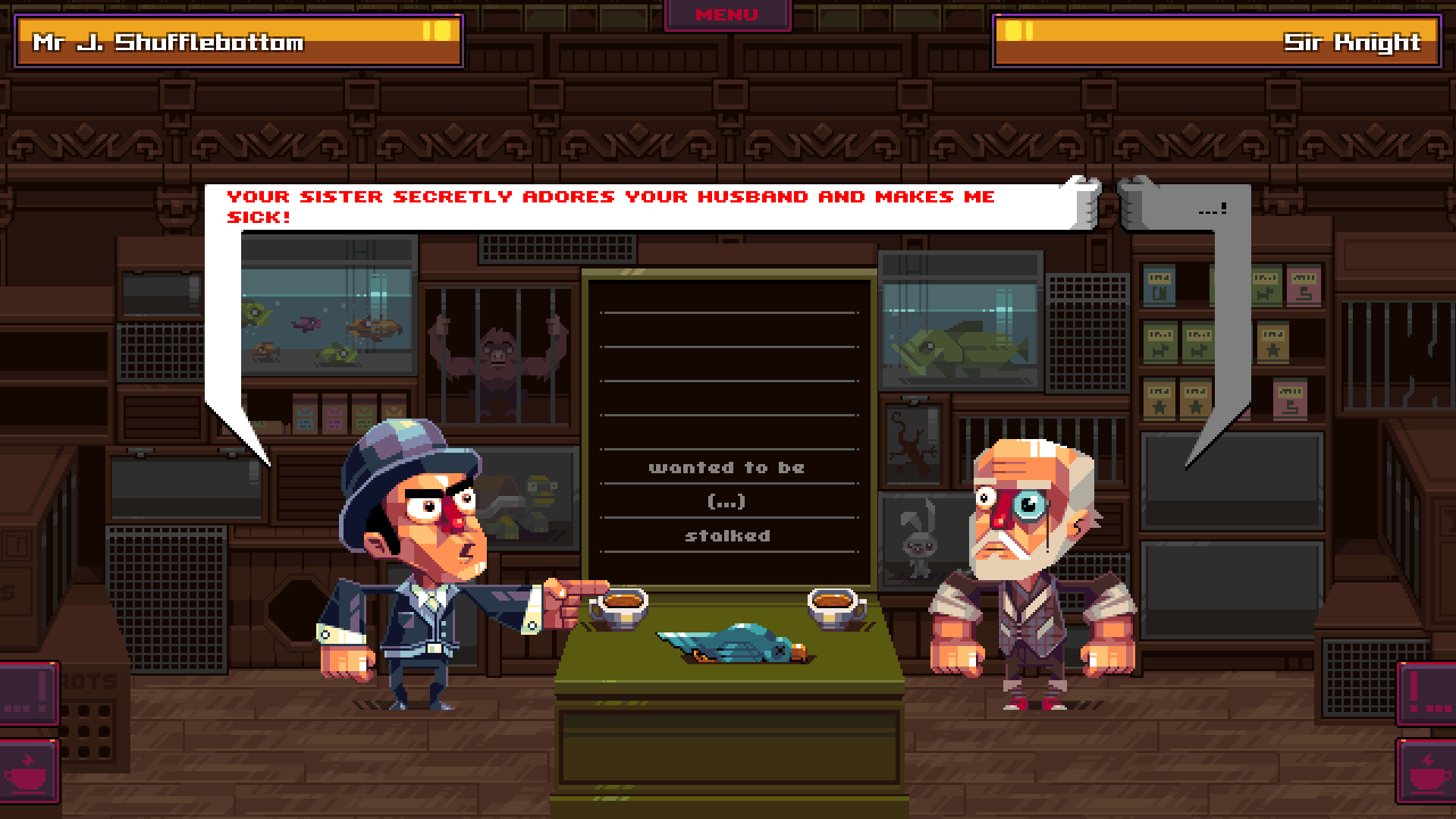 Playing 'Oh Sir!' with a friend is marginally more entertaining, if both players are in the mood for the Monte Python style way of talking to people but only in a very limited, contrived manner. The first game I had with a buddy was decent as we poked fun at the lame jokes, but afterwards I had trouble convincing him or myself to keep going for the sake of the review. Word games with friends can be great, but they usually have a decent amount of content for the purpose of replay, something that this game does not possess in the slightest. 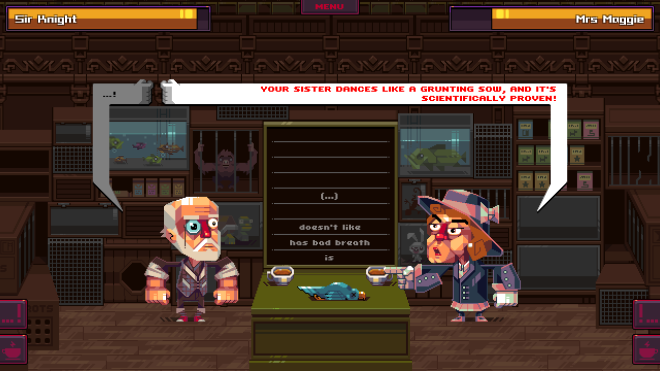 'Oh Sir! Is done in Vile Monarch's expected pixel style, with stereotyped English characters and customs that match the faux-offensive insults. The interface is easy to use but the visual presentation on the whole is very basic and workmanlike. 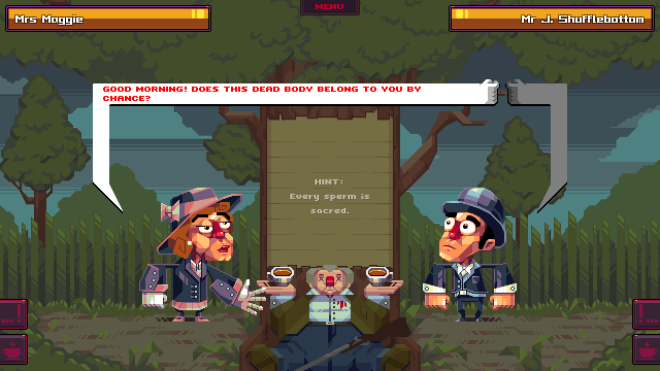 The funniest part about this game is probably the voice actors, who hammed up the lines as much as they could in ridiculous accents. Their value goes a little further than the lines but only barely, and can't save 'Oh Sir!' from tedium. The music sounds like a British patriotic parade, or what I imagine that would sound like.

'Oh Sir' has very little in replay value. There is only one game mode, and although it can be done solo, with friends, or with strangers, it's exactly the same experience. A tournament can be conducted in single-player to string matches together against the AI, which I suppose is as close to a campaign as it gets. 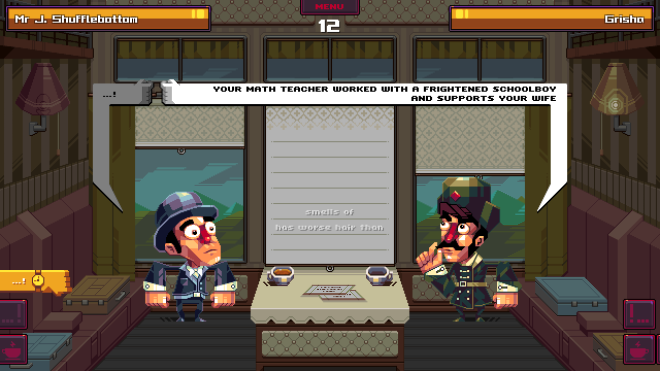 'Oh...Sir!! The Insult Simulator' feels like the kind of party game idea that devs would bandy about at a brainstorming session, briefly reminiscing about Monte Python before tossing it into the bin with the other bad ideas. Instead, Vile Monarch actually went through with making it, and I can say in no uncertain terms that it is not my cup of tea.