The Game Itself
4 Stars
The Video: Sizing Up the Picture
4.5 Stars
The Audio: Rating the Sound
3.5 Stars
Replay Factor
4 Stars
Bottom Line
Recommended

The venerable 'RollerCoaster Tycoon' franchise began in 1999 by Chris Sawyer Productions. Frontier Developments, also responsible for the 'Elite' franchise, developed the third game in the series. Their version was popular but the series faded away except for a few imitations. Frontier never lost their love for virtual amusement parks (they also developed 'Zoo Tycoon' and 'Screamride'), and they have been working on their own new sim, 'Planet Coaster', for some time now. It is available for PC.

Tycoon games are typically simulations where the player is the invisible, mute director of a business. The formula can be applied to almost anything, from cities to lemonade stands to camgirls, and in the case of 'Planet Coaster' it's an amusement park. While the roller coasters are important, the entire visitor experience and financial profile of the park can be micromanaged, right down to the marketing campaigns and how many condiments go on the snack shack burgers. For most playthroughs, the goal is to accumulate more money and craft bigger, better attractions and rides. 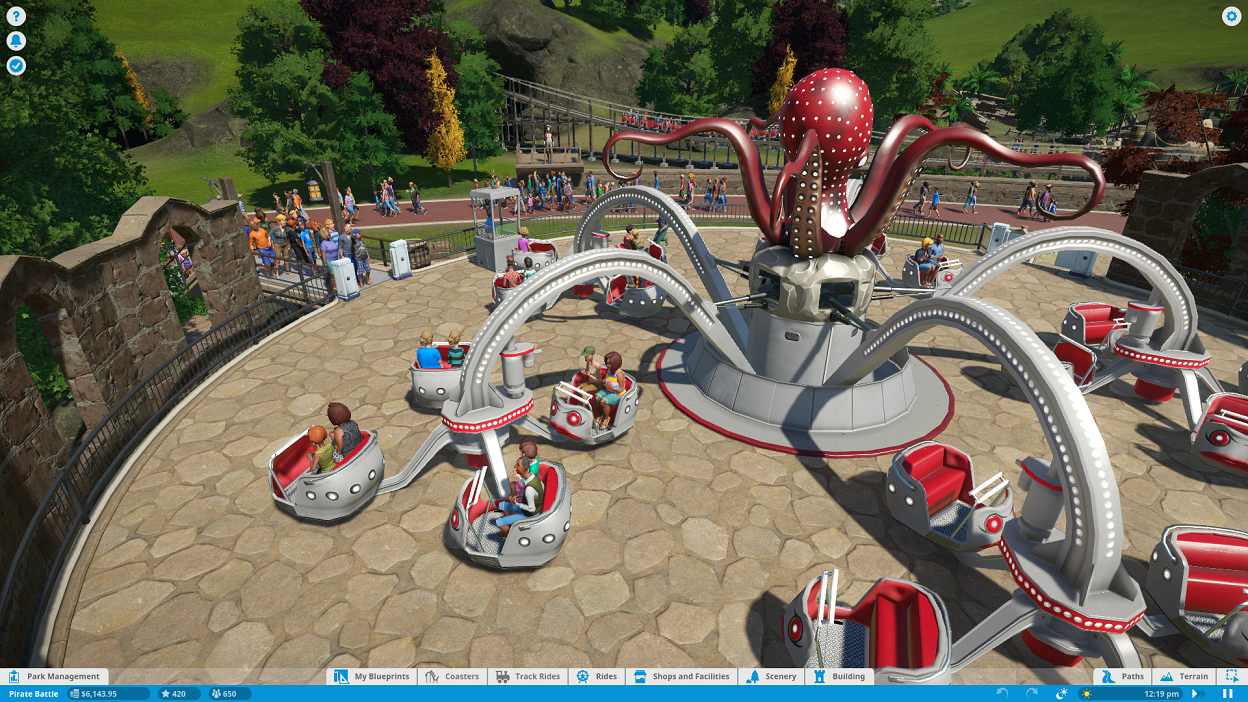 The game's tutorial mode is paltry, consisting of links to three YouTube videos where Frontier has narrated some basic gameplay elements. This closely mirrors the tutorial in their 'Elite', also a game with a very high skill threshold, but 'Planet Coaster' has fewer videos and no missions to speak of. I hopped into the campaign to learn more and continued to be disappointed. Learning in 'Planet Coaster is on a trial-by-fire basis only, it seems. The campaigns are strings of themed, partially constructed parks with a few variables and open-ended, unimaginative objectives, usually along the lines of "make money" and "attract visitors". Even the tooltips are watery, limited mostly to how to rotate the camera and not things like actual roller coaster construction. 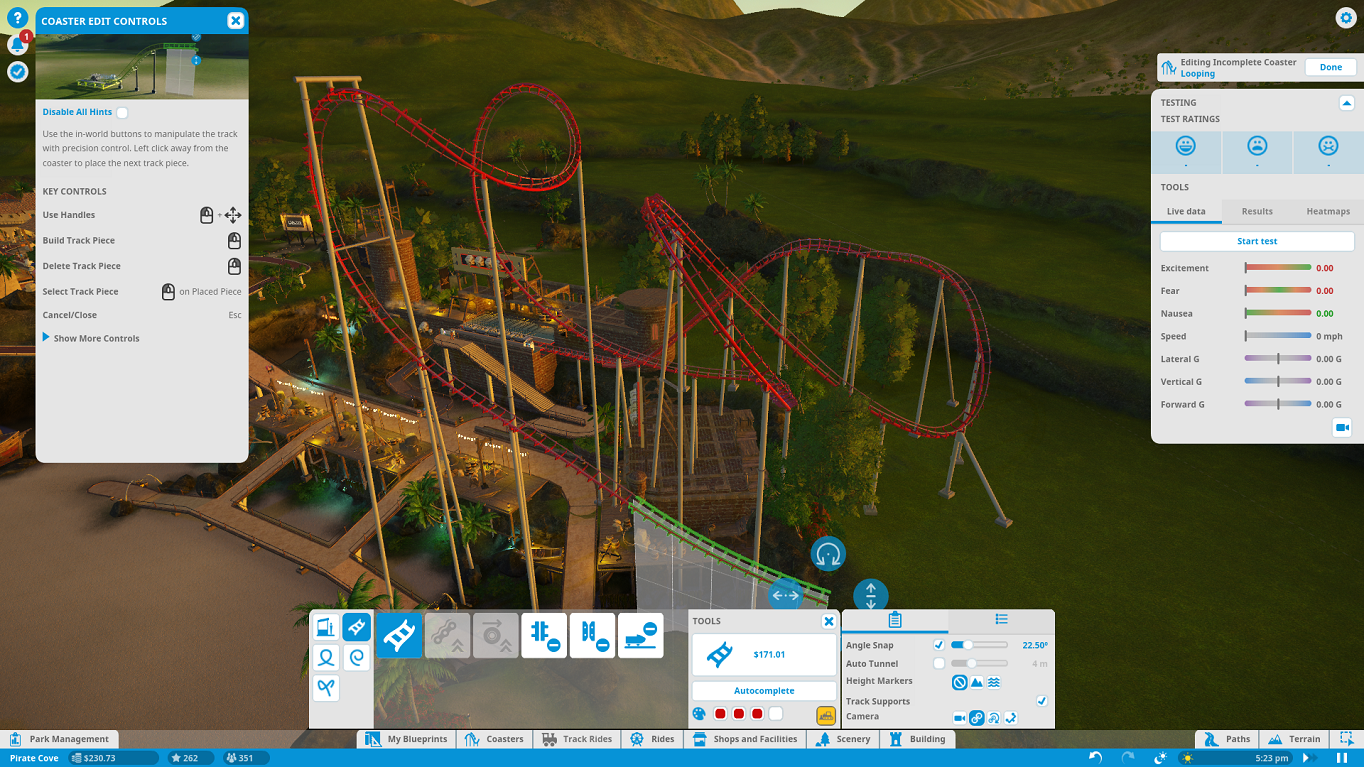 Learning the many, many mechanics of theme park ownership took longer than I expected, but once I got the basics down, 'Planet Coaster' revealed a huge, thorough, and finely crafted suite of sim tools. As the park director my main job duty is to manipulate visitor behavior to spend more money, which they are quite happy to do if given the proper incentives. After researching new types of rides and marketing, I decided to go after the entire family market, much like a Cedar Point or Six Flags. This requires a diverse set of attractions - massive, exhilarating coasters for the teenage thrill-seekers, smaller, cheaper rides perfect for young kids, and of course lots of restaurants and gift shops where their parents can buy overpriced food and merchandise. Being thoroughly unscrupulous, I nickel and dime these suckers at every opportunity. A central retail hub in the middle of the park is supplemented by snack shops placed at calculated locations around the rides, ensuring guests never have to walk far to spend more. A gift shop stands right at the park exit. Even the bathrooms and ATMs deliver money directly into the kitty. 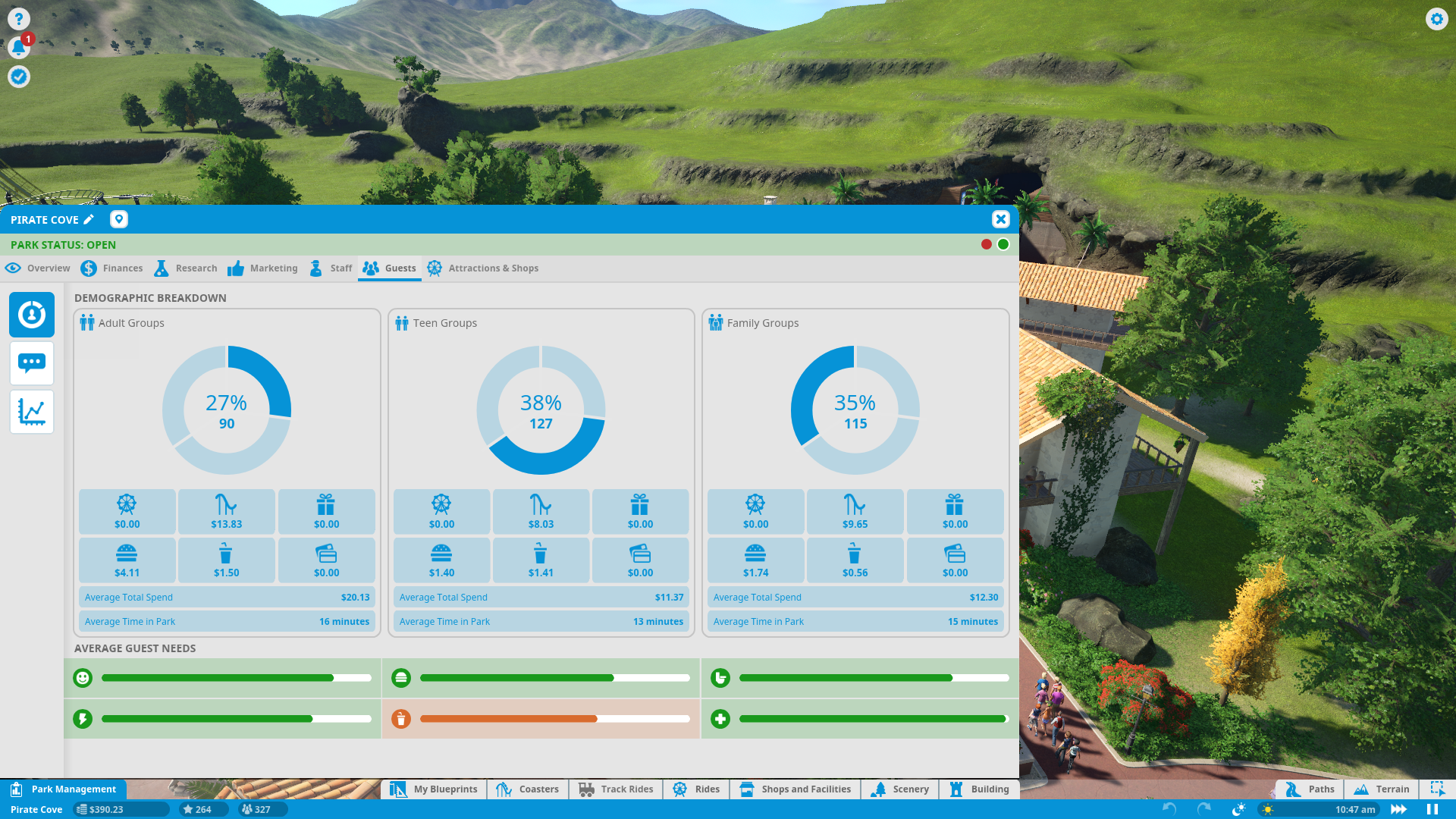 Sometimes the park guests even ask me to charge them more. Complaining about long queues for the rides? The answer is a higher ticket price until more rides can be constructed, and just like greedy theme parks in the real world, I am pleased to offer my visitors express passes at a premium. Frontier did their homework, and the final product is a game that closely resembles its real life counterpart. Even for a player like myself who doesn't frequently enjoy the tycoon genre, I happily spent hours constructing my dream park, slowly climbing the ladder of corporate success and dipping into the behind-the-scenes tinkering occasionally to prop up fun new attractions. My first few custom rides were pretty lame, but once I learned more about the creative angles of roller coasters, what an "inversion" is and other things, I was able to construct towering steel monstrosities to thrill and captivate even the most jaded parkgoers, and didn't even kill that many people. These big rides are expensive and time-consuming to engineer, but the blueprints can be saved and shared in the cloud, and the blueprints of other players can be easily accessed and copied or improved. The business side of the game can be a little slim, such as the staff and research sections, but the creative side makes up for it. 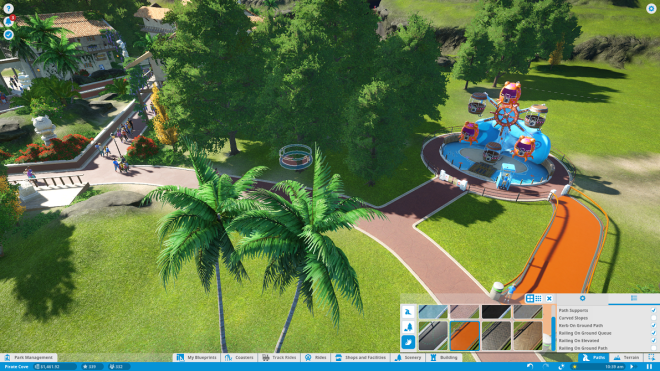 'Planet Coaster' looks great on the ultra settings and has been decently optimized. The game is highly detailed and very smooth, with little slowdown even with a massive, highly populated park. The interface is where the game is the most difficult, both because of the complexity of the system and the lack of tutorial missions. Routine tasks like building walls and pathways can be cumbersome. Even after playing for some time, I wonder if there aren't more little systems and shortcuts under the hood that I haven't been introduced to, and I'd rather know everything up front than risk missing things in a trial by error format. 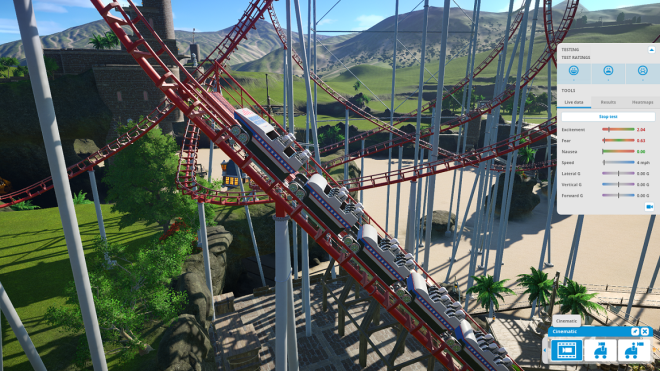 As reported in PC Gamer, Frontier's sound designer Watson Wu took over a theme park to record 'Planet Coaster's audio, and the result is an authentic, rich soundscape. The coasters are especially good, with all of the clicking, whooshing, and screaming you'd expect. The music is pleasing enough without standing out.

The main attraction is the sandbox, where it's possible to perfect a park according to exacting specifications and make really beautiful or hideous creations as the player desires. All of the various mechanics and blueprints are available there once they've been unlocked through research and the like. Sandbox is bookended by the campaign and challenge missions, both similar in that they offer prefab parks with accompanying objectives. These are better more for stealing ideas than anything else - sandbox is the best part of 'Planet Coaster' by far. 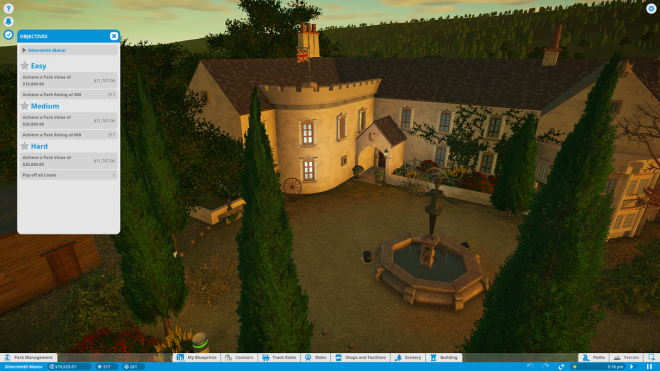 In some ways it is very dramatic how far the roller coaster tycoon genre has come, and yet the core rulebook has changed little. Frontier has made an abundant and pretty simulation bound to captivate tycoon fans, although in essence it is much like 'RollerCoaster Tycoon 3'. I admit I would have liked just a little bit more hand-holding at the beginning of the game, but that didn't stop me from having a lot of fun with 'Planet Coaster'.