Orange color variant reviewed. The Orange Striker ZX has launched as a Best Buy exclusive, while both the black and the blue versions are available from various merchants. Headset was used primarily with the Xbox One. Some time was spent on the PS4, PC, and various mobile devices.

Coming up on 2015 and console gaming is as online as ever with both competitive and cooperative play modes infiltrating all game genres. As the Xbox One closes in on its first anniversary there are several new headset options coming online. And yet, for those looking to step up from the included Xbox One Chat Headset, the options can get a little pricey. The sub $100 price point is the sweet spot for a lot of gamers, and it's in this growing but still under populated segment that Polk has launched the Striker ZX.

Warning: Console warriors may not like the following segment. After nearly one year, headset options for the Xbox One are considerably behind the PS4. What this means is that Xbox One players are having to pay more to get less. The vast majority of Xbox One headsets (even in the $200+ range) require a chat adapter for the controller at a price passed along to the consumer. At the same time, that troublesome Chat Adapter hasn't been around all that long (think 'Titanfall') and as a result, Xbox One headset manufacturers are playing catch-up. 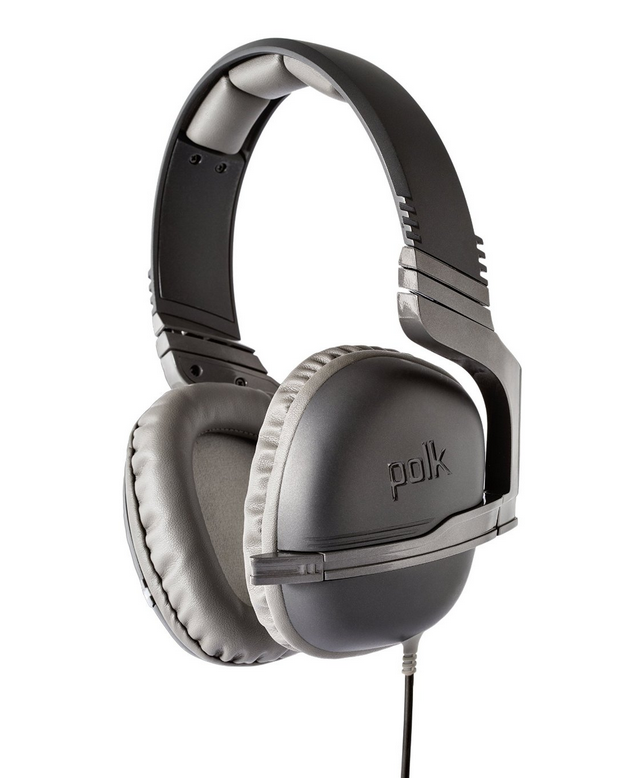 Enter the Polk Striker ZX. Bundled with the Polk's own new Wireless Headset Adapter (and micro USB cable for controller flashing), the Striker ZX is a stereo headset with 40mm drivers, and a retractable boom mic. Other features specified by Polk include "ProFit Comfort", Chat Loop, and a 40 inch cable. The whole package is just about as simple as a headset can get on the system, a characteristic that has its pros and cons. Obviously, the Striker ZX is a major step up from Xbox One Chat Headset which is included with the Xbox One, what isn't as obvious is how much better Polk's Wireless Headset Adapter is than the standard Xbox One chat adapter. (More on the adapter later.) Going forward, most headset manufacturers are either building their own Xbox One headset adapters or shipping headsets that ask the buyer to acquire their own in order to be Xbox One compatible. 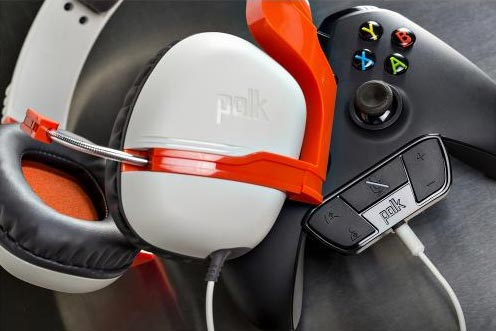 Using the Striker ZX and the included adapter reveals the headset's beast feature by far, stereo audio reproduction. I used the headset for long sessions in 'Sunset Overdrive,' 'Destiny,' and in the 'Evolve' Big Alpha, and the stereo playback was always crystal clear. (Though not without wavering quality subject to controller based wireless audio.) It seems likely that the headset shares the same 40mm drivers that power the Polk 4 Shot, and as such, the passive design delivers a stereo audio image that is clear and can handle a crowded sound design without breaking a sweat. The sound quality is so good (for this class) that it might not be immediately obvious that this headset taps out decidedly short of a loud volume. This is pretty common when it comes to the Xbox One game audio delivered via the controller. Use the Striker with another device, such as smart phone or PC, and it can get louder. 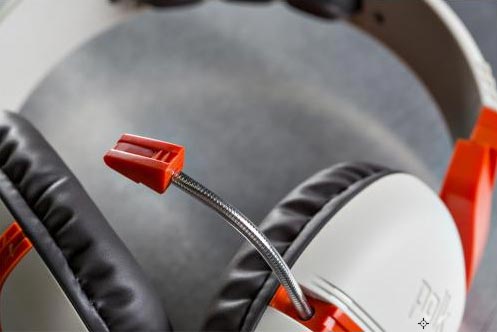 As part of the Striker ZX package, the retractable mic seems to have been designed to prevent being lost. It can be pushed into the ear cup so that only a bud sticks out, but at full extension is stops short of reaching the normal full mic position. Presumable, the mic is retractable for those times when using the headset for just listening, which is little since the Striker ZX form factor isn't the best option for mobile use. Getting back to the mic, I just left it extended and relied on the audio adapter for when I needed to mute it.

Mic quality is decent but it's betrayed by the Chat Loop feature, and by the short length of the mic extension. By default, the Polk Wireless Headset Adapter allows the user to hear their voice, which is nice, but it's at a louder volume than what is actually being transmitted. The Chat Loop can be disabled by holding the Game Balance Increase (upper left button) and the Master Volume Increase button (upper right button) for two seconds. I like the Chat Loop feature, but as implemented it's far from ideal.

The end result is a clear mic pickup that feels more like a dangle mic than a boom. 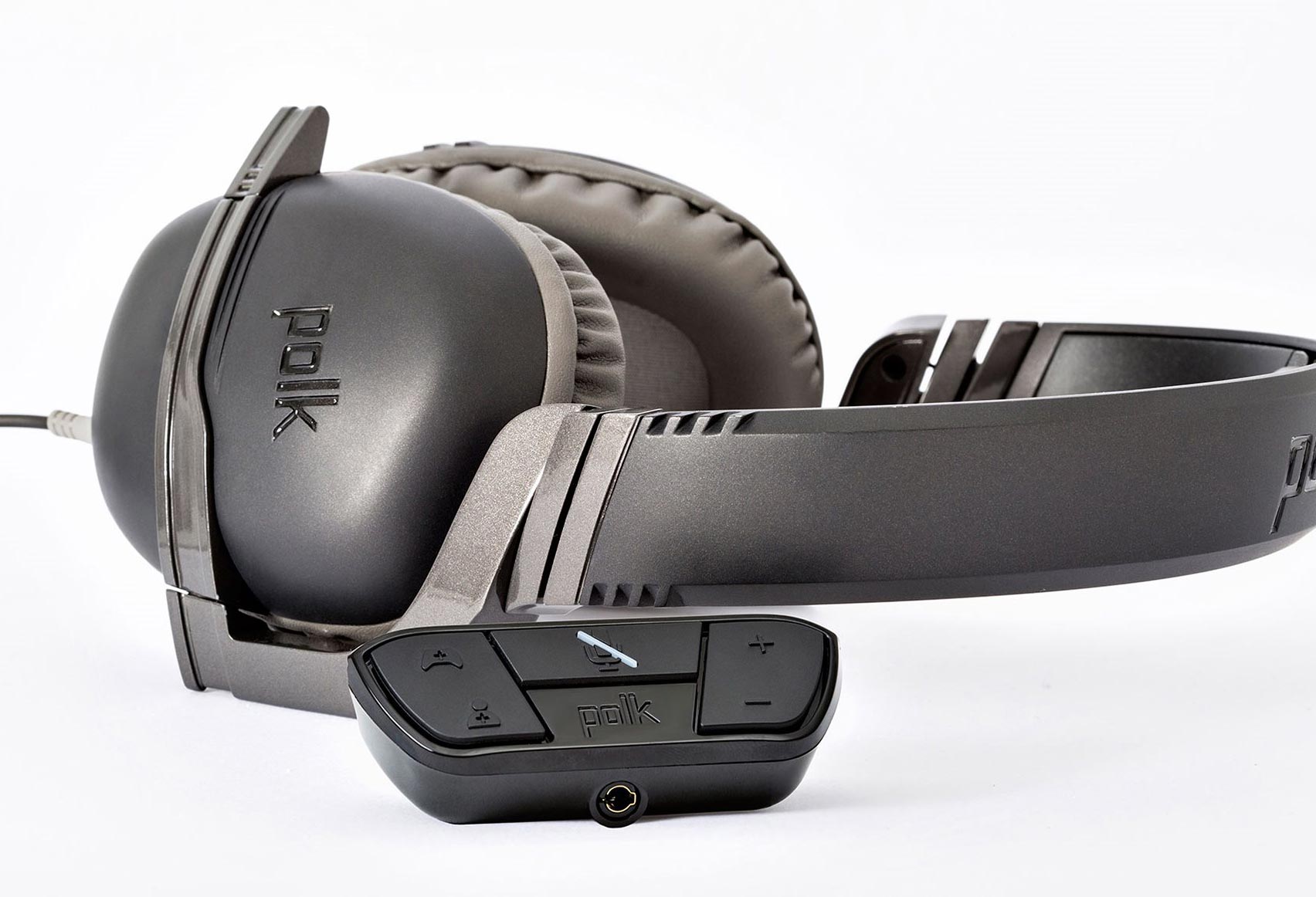 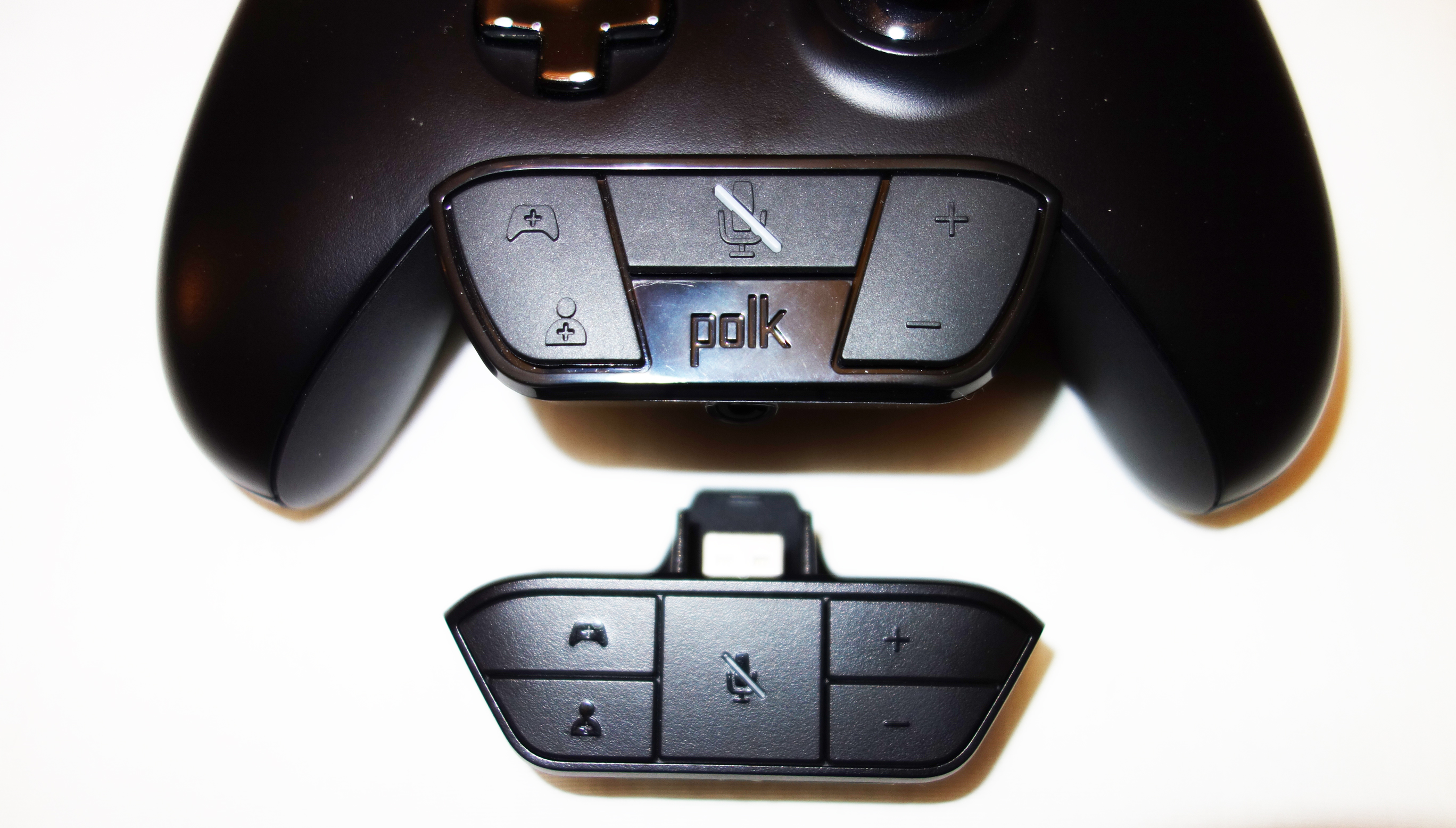 I was really looking forward to using Polk's Wireless Headset adapter, but aside from a surface and an added pair of controls, it seems to perform the exact same as Microsoft's own. The Polk model has a glossy shell that is thankfully a little easier to remove from the controller (why anyone but a reviewer would want to remove one of these adapters is beyond me). The mute button is smaller to make room for the Polk logo, which can take a little getting used. The other four buttons are now more like two volume rockers, which is fine. The extra controls/features are the aforementioned Chat Loop and the ability to mute all audio by pressing the Mute button for two seconds (the white mute LED will flash). The adapter uses the same controller firmware as Microsoft's and seems to be basically identical in performance, even when used with the Polk 4 Shot. 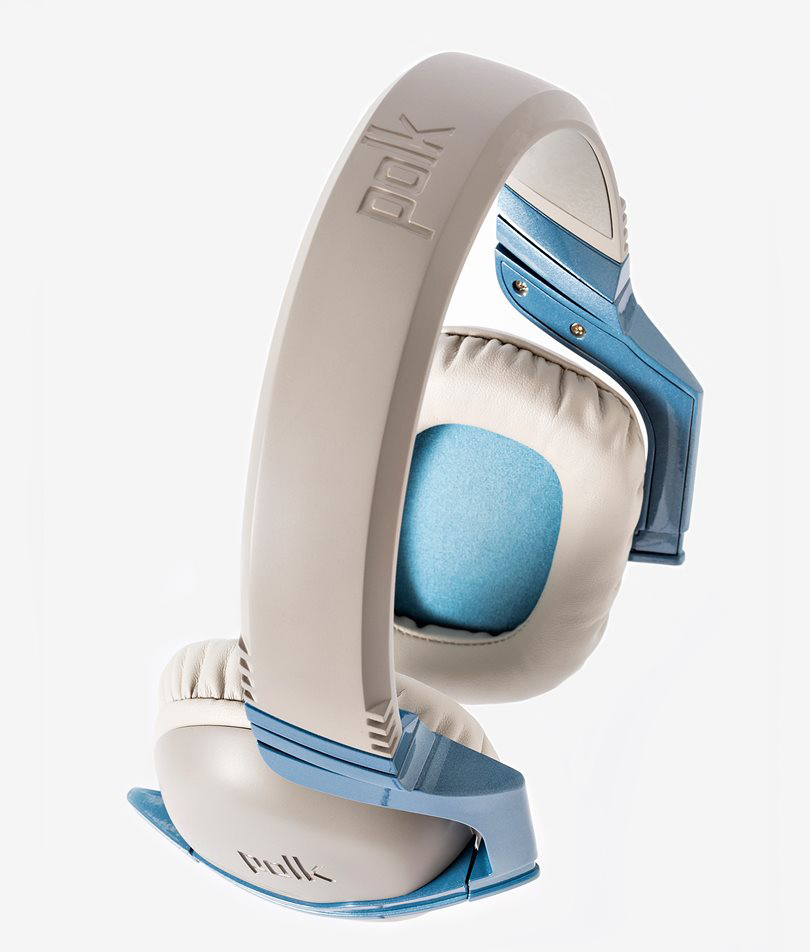 The Striker ZX fits me like a glove. The fake leather pads on the ear cups and on the headband, combined with the slight weight (less than 8 ounces) and the slight swivel in the ear cups make the headset one of least obtrusive over the ear designs I've used. The too-short mic is never in the way and its flex arm is more useful in practice than on paper. 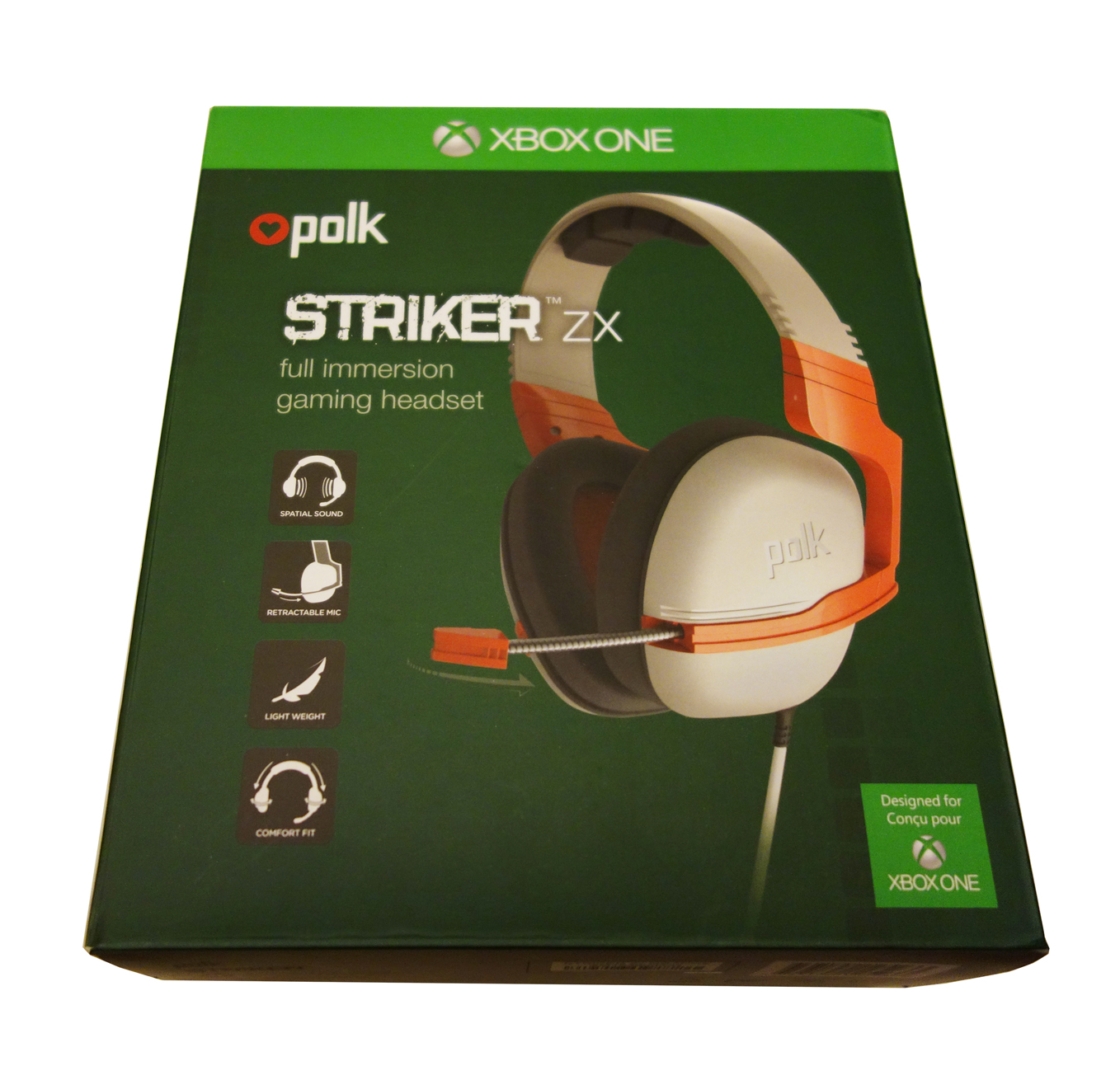 All this comfort comes with a big caveat. No matter how it looks in pictures, the Striker ZX is chiefly made of light weight plastic. Much to my dismay, the ear cups cannot lay flat, nor does the headset fold in any way. The Striker ZX comes in a squat box, and that's because the simple headset lacks for any kind of transport mode. The cord is even attached. As long as the headset is sitting out or in use, this isn't much of an issue, but should I want to put it away or dream to take it somewhere, the form factor becomes a big issue. 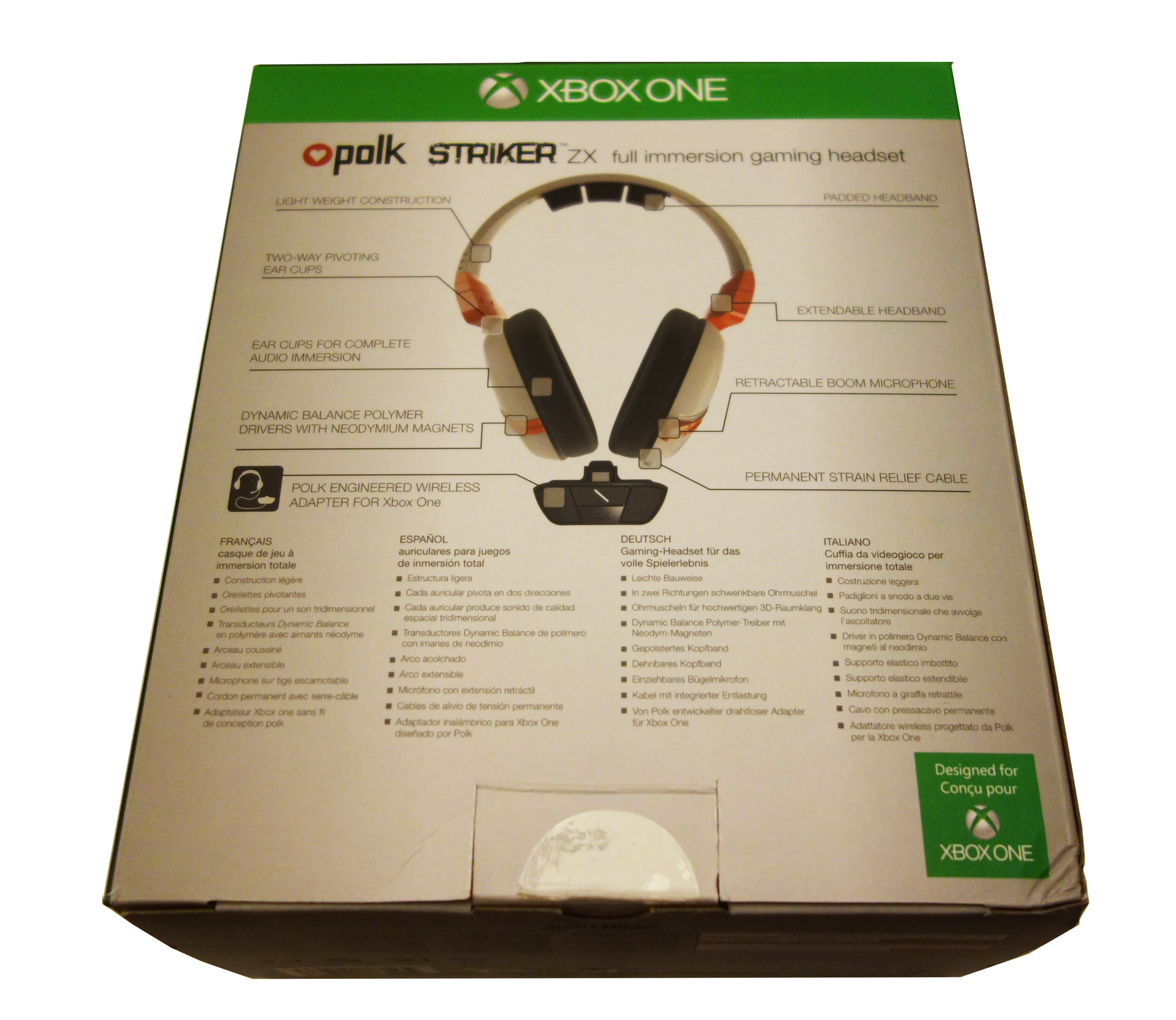 The build quality seems fine, no rough edges or obvious gaps, but the light plastics and fixed shape make me think that one misstep and one bad crunch could finish it. Users familiar with taping headsets will likely just keep their fixing materials on hand. The fixed cord is described as having a 'Strain Relief Cable' which might stand up ok to heavy use, but I would prefer that it was detachable all the same. 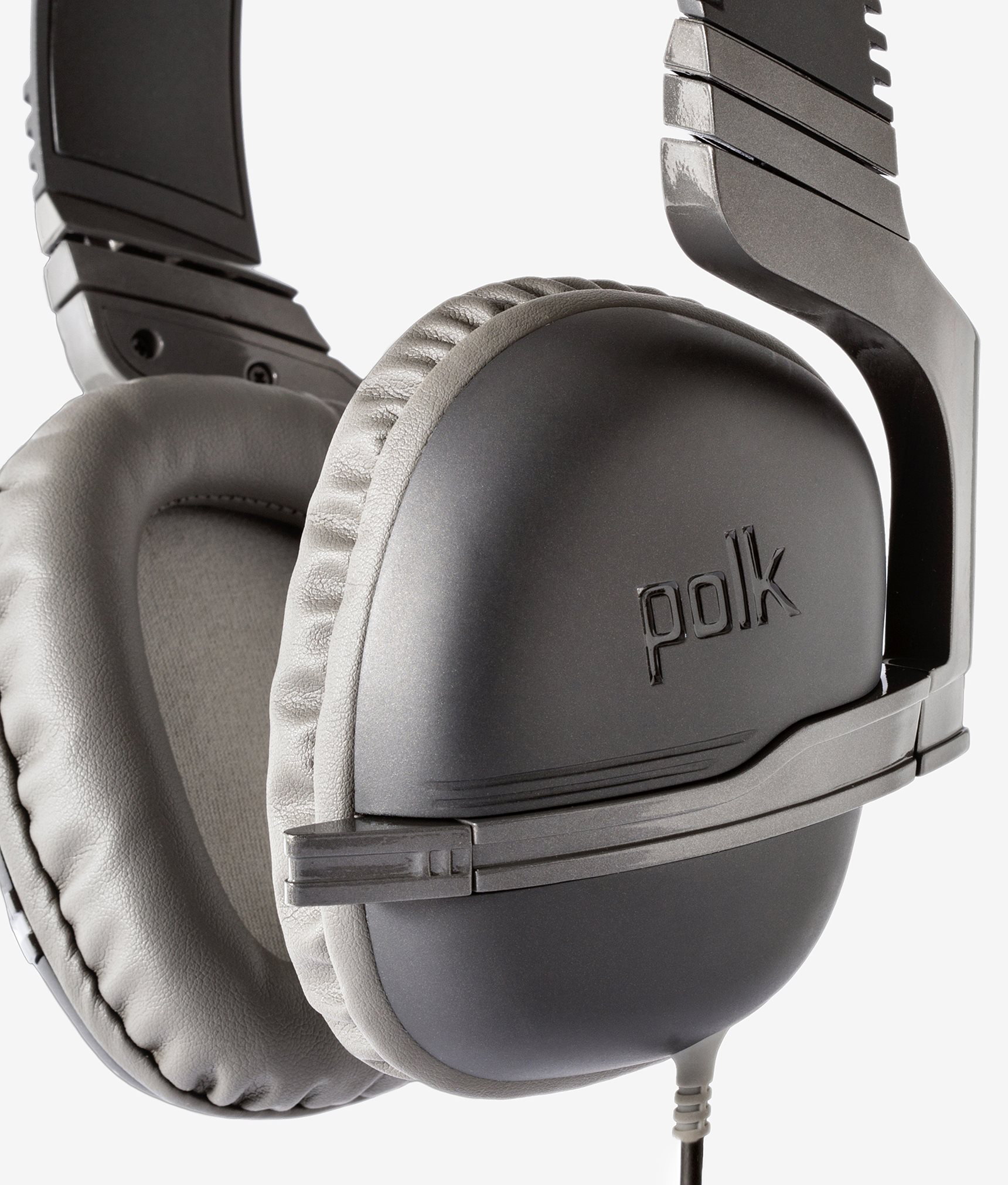 Plugging the Striker ZX into the DualShock 4's headset port and performance is very much the same. Without the Polk adapter, the Chat Loop feature is lost, but the PS4's mic sensitivity slider (in the options) is more useful anyway. Hopefully that will be something implemented on the Xbox One side soon. Polk has promised to release a multi-platform Striker P1, which seems like the ZX without the Xbox One adapter. It's likely then that Striker ZX has had some tuning done for the PS4, and any rate, the headset works well on that platform, which is a nice bonus.

Style wise the glossy orange and PC off white color combo isn't my jam. The Black/Grey combo is much more palatable. Since the headset is so plug and play (assuming the audio adapter has already been set up), I can see a lot of users enjoying how easy it is to switch from no headset to headset at a given moment with the Striker ZX. 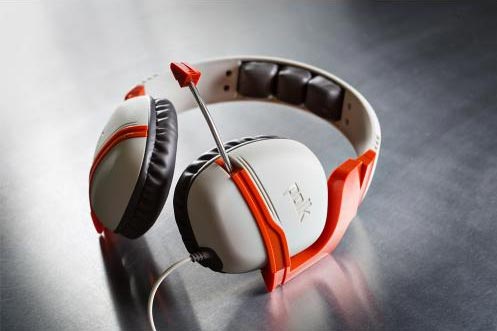 In the sub $100 Xbox One headset segment, the Polk Striker ZX reproduces stereo well and is comfortable, making it a viable option, especially for any users that don't yet have a Xbox One Chat Adapter. But to become a more definitive choice, Polk needs go back to the lab and get a form factor that is more collapsible, durable, and offers better than standard mic performance. That leaves the Striker ZX as a good starter headset option for users who are getting into online gaming, but aren't ready to drop big bucks on a headset.